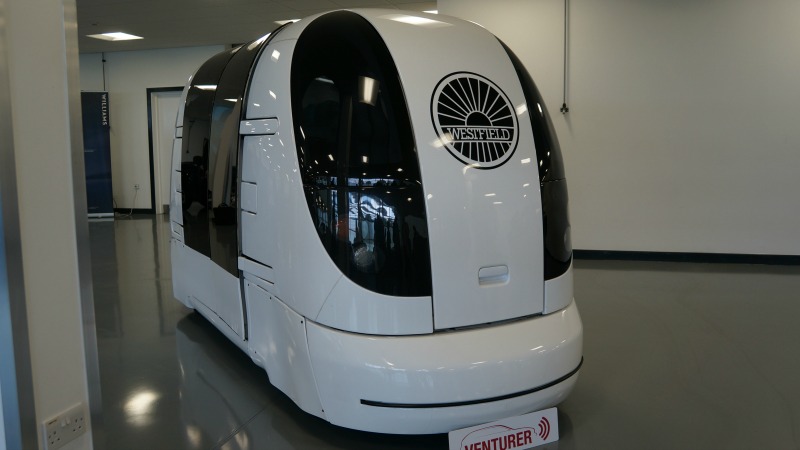 It’s fair to say that there was a mixed reaction to the Queen’s speech earlier this month, which highlighted the Government’s commitment to autonomous vehicle technology – that’s driverless cars to you and me.

“Autonomous vehicles… are all well and good, but most people would prefer to see their everyday transport sorted out first,” said Stephen Joseph, head of the Campaign for Better Transport.

A sentiment which may resonate with Bristol’s commuters, but Bristol is also one of four UK cities taking part in a multimillion pound research and development project to examine autonomous technology, laws, insurance implications and, most importantly, public reaction to driverless cars using our roads.

The city is a year into a three-year trial of the Venturer project, backed by Bristol City Council, South Gloucestershire Council, the University of Bristol, UWE, Bristol Robotics Lab and a whole host of private sector companies, which are exploring the viability of the technology.

The prototype technology was launched at UWE last year

For the past 12 months the academics and business leaders have been quietly beavering away on the logistics, technology, legal and insurance questions.

Now they have revealed the pod which will be the first driverless car to hit Bristol’s streets, sometime in summer 2017.

Hold on you may say – ‘I’ve seen that car at Heathrow and aren’t Google doing sometime similar?’

Well, yes and no.

Venturer say they are doing things very different. For a start the airport pods (incidentally designed at Bristol University) run on a pre-programmed route so they are not in that sense fully autonomous.

There has been a lot of excitement after Google unveiled its prototype but this is one type of technology; Venturer and the other UK consortiums say they are considering a range of different technologies and the wider legal and insurance implications.

So now, one year after Venturer’s launch, the project is about to shift up a gear.

They’ve been given £5m to research the technology and they came together this week at Williams F1 Advanced Engineering HQ, just outside Wantage in Oxfordshire, to show just how they’ve been spending it.

If a Formula One team seems a strange place for the launch of a driverless pod, consider this: not only is the company part of Venturer but, as managing director Craig Wilson points out, Williams considers driver safety paramount.

As a result of a car accident in 1986, company founder Frank Williams suffered spinal injuries and was left a tetraplegic. “As a result,” says Wilson, “we are very conscious of road safety… and improving road safety.”

Handing over control of your car to a computer may seem a safety paradox, but research has found that human error is a factor in more than 90 per cent of deaths and injuries on our roads.

With the pods programmed to obey all traffic laws and removing ‘boy racers’ from the equation, safety has been touted as one of the big selling points of the driverless car.

However, getting the public to trust the technology is crucial. There have already been questions raised over the safety of the system from hackers and, if bus drivers, taxis and lorry drivers were replaced by computers, then a whole job sector may be under threat.

Professor Graham Parkhurst, director of the Centre for Transport & Society says the technology certainly could change the job market: “There is the big questions around jobs and, ultimately with all big changes, there are winners and losers.

“A number of driving jobs may not be necessary however, at the same time, this sector may create jobs and these may be higher value jobs so, providing we can up skill our workforce, then there should be good opportunities as well.”

This is one of the many factors that will be considered over the remaining two years of the project. Another huge area which is being considered by the project are the insurance and legal implications of driverless cars.

“We have to look at innovation,” says Stephen Hilton (above), director of futures at Bristol City Council

Eventually it could mean the end of driving licences, changed perceptions of car ownership, increased access for the elderly, disables and young, and possible improvement in air quality and reduction in congestion.

Importantly, while it could be another 15 years before you see driverless cars on Bristol’s roads, the project is already laying the groundwork for positioning Bristol as a technological centre of excellence, working in partnership with the pioneering Bristol Is Open project.

Stephen Hilton, director of futures at Bristol City Council, is adamant that we need to consider the reality of our transport system in the future: “We cannot get more cars onto the road and we have to look at innovation in the transport system – things that allow the sharing of vehicles, allowing the people of Bristol to get around more efficiently.

“If we don’t pave the way for that now then we will miss an opportunity to be at the forefront. This is about positioning Bristol as one of the first cities to benefit from efficiency that that technology will bring.”

Read more: The revolution happening beneath our streets