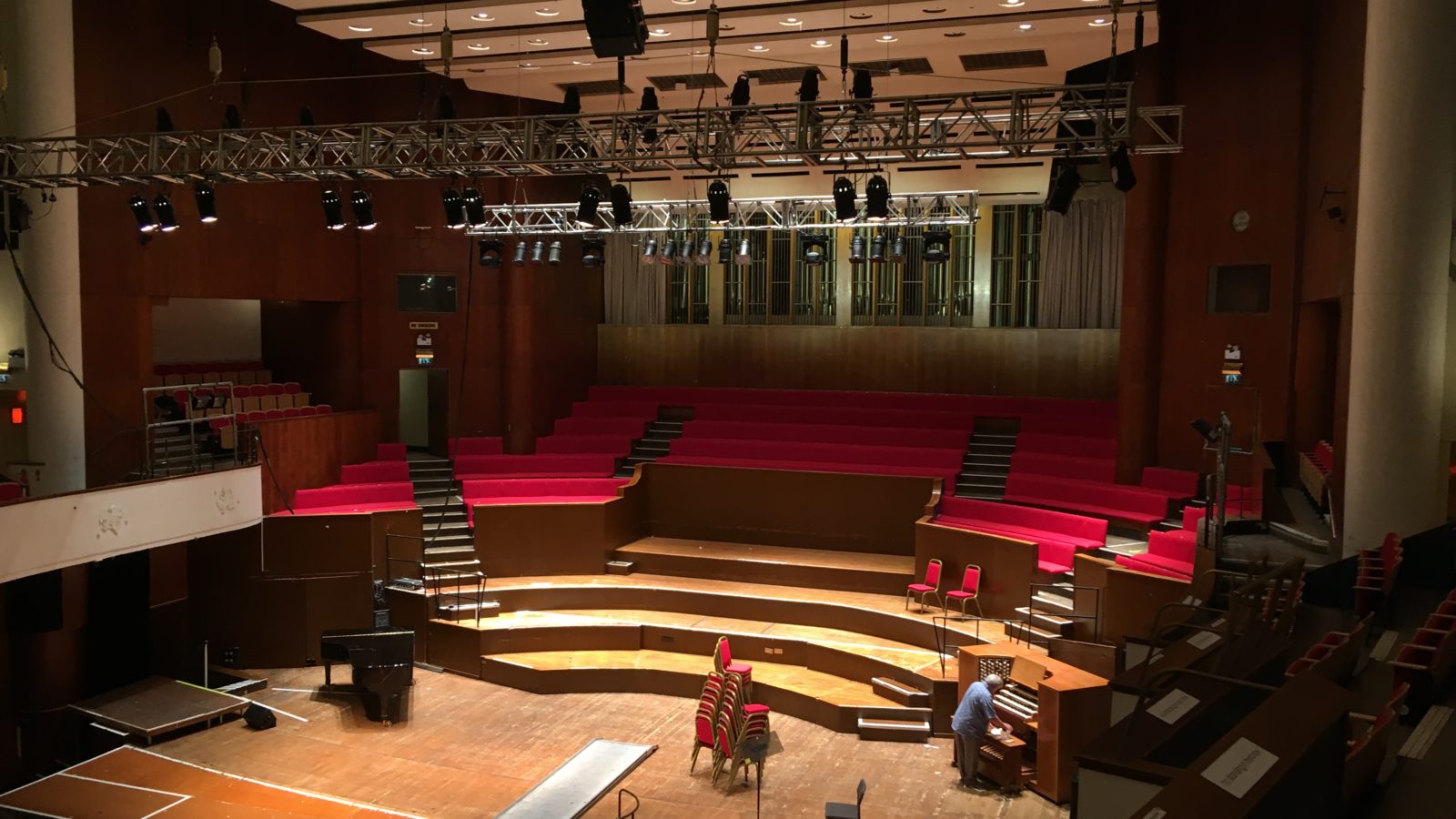 Inside Colston Hall‘s empty auditorium early on a quiet morning, Chris Mansfield of Bristol & District Organists’ Association is putting the enormous concert organ through its paces for the last time in its current iteration. The mighty instrument, built between 1950-55 by master craftsmen at Harrison & Harrison of Durham, will be the first piece of the Hall to be packed up as the doors close after the final performances on Sunday June 10.

They will remain firmly shut until some time in 2020 as £48.8m renovations take place to update almost every part of the venue. 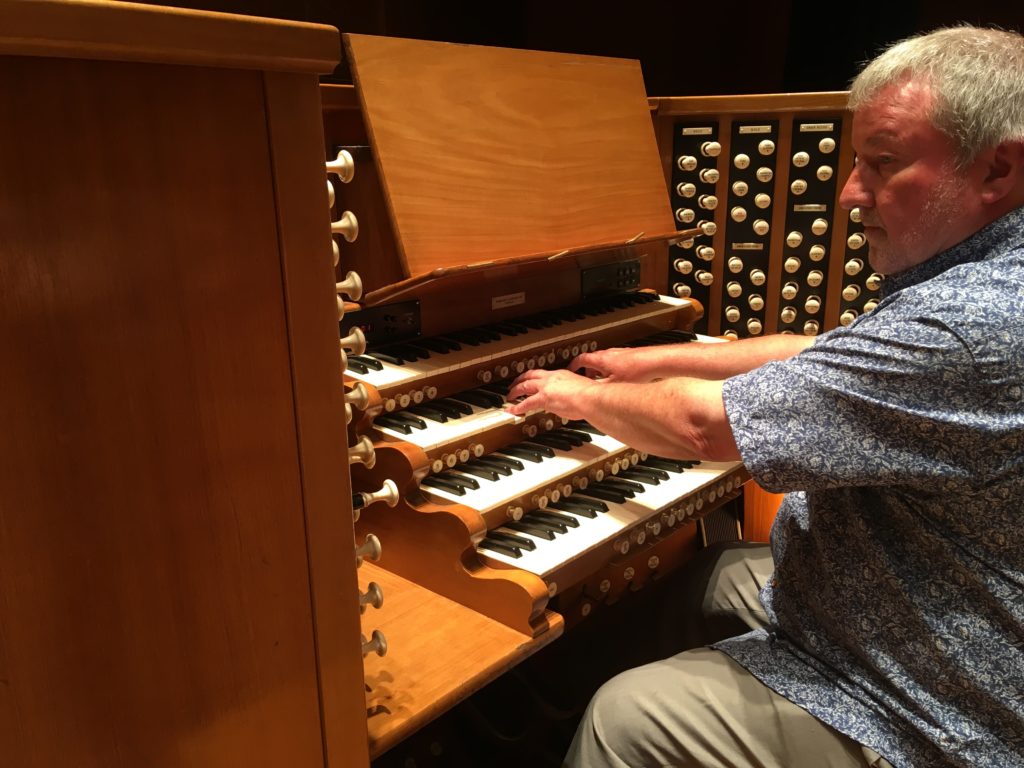 Chris has been the Colston Hall’s go-to man for maintaining the organ for over 15 years. “This is the last concert hall organ of this style in the UK,” he says, sitting at the wooden console, which is covered with more than a hundred ivory drawstops. The seat is scratched from the rumps of organists past who have sat there to play it – from George Thalben-Ball who performed the first concert on the instrument in January 1956, to the modern musicians who tinkle the ivories at the annual gala concert – and the whole organ will undergo a £1m repair while in storage, including the wheezing leather bellows that now leak and add the gentle hiss of white noise to each recital.

“The Colston Hall organ is both very large and exceptionally crafted,” Chris continues as he gives a demonstration, depressing a key and then pulling different drawstops in turn to demonstrate the range of sounds it can make, from chortling flutes to reedy oboes and rich trumpets. “It emulates an entire orchestra.  Some of the sounds are quite raspy and rude, but it can also produce melodies of extraordinary sweetness.” He plays a long, swelling orchestral phase before depressing some of the deepest notes, which make the stage rumble.

The task of the six men who enter the auditorium to take the organ to Durham in a fleet of eight lorries will be to painstakingly dismantle its 5,372 pipes. These are housed in a three-storey loft behind the stage, and getting into it involves scaling a series of increasingly wobbly ladders and trapdoors that ascend into the dark heavens.

Glimpses of plush red seats are occasionally visible between the metal pipes, as is the peeling paint of the old ceiling at the height of the stark lighting rig. It’s cool and dark behind the grille, the loft lit only by a couple of dim modern lights, and there is plenty of headroom even as you reach the very top of the last pipe, knee-quakingly high above the stage.

The largest organ pipes are wooden boxes that lay horizontally – the biggest stretches more than ten metres across the width of the auditorium – while the highest notes are produced by tin whistles the size and shape of drinking straws. Chris picks one up and blows it, creating a thin, reedy sound. He slots it carefully back into its place and grimaces. “I don’t want to think about how dusty that is. Sixty years of dust!” 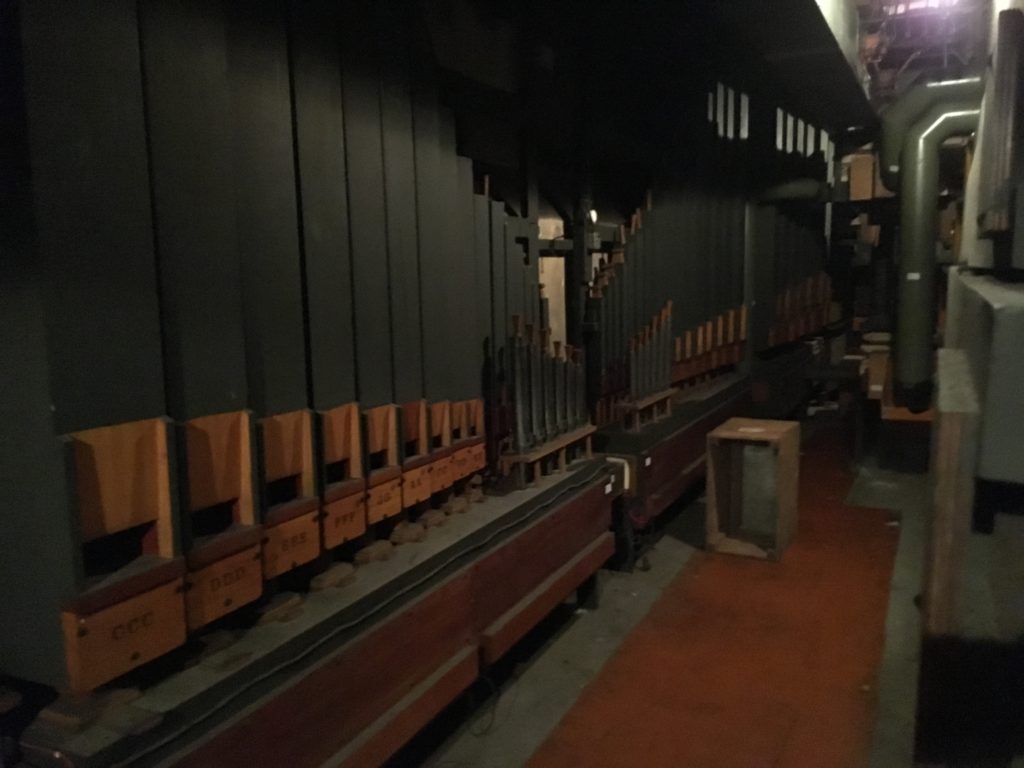 The three-storey organ loft is the surprising spacious home of more than 5,000 organ pipes

The organ will be made more prominent in the renovation work, which will also transform the main concert hall both aesthetically and acoustically. “This auditorium was built for orchestral music and we will also design it for what is most difficult to set up acoustically, which is orchestras,” says general manager Nick Craner as we emerge from the bowels of backstage into the generous proportions of the 1951 festival-style hall. “The main thing is to make it adaptable for rock and pop concerts. We need to make this space work harder and have two or three shows each day for the viability of the place.”

Improvements also include replacing the current seats for modern ones that are bigger and more comfortable (“because people have bigger bums now,” deadpans Nick), better disabled access to each level of the auditorium, creating a dedicated seating area for disabled people, and taking the stage back deeper to open up more space and performance possibilities. Sentimentalists will be pleased to hear that some reminders of the 1950s will be kept, including the golden cherubs that adorn the balconies, but the overall plan is greater comfort and more flexibility. 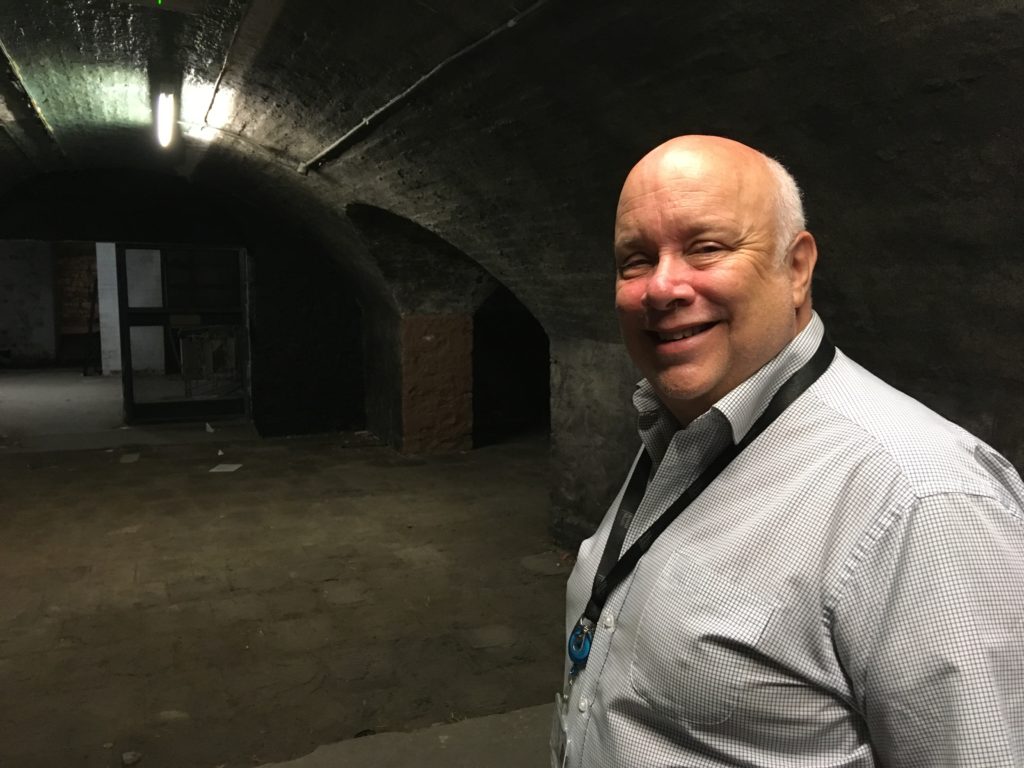 Nick Craner, general manager of Colston Hall, in the cellars which will be transformed during the works

This mantra extends to the Hall’s second space, The Lantern, which will be opened up with its original grand front windows reinstated and tiered seating installed. A third space will be created in the Victorian vaulted brick cellars beneath the stage, currently now used as a series of storerooms and as the greenroom for visiting bands. A dog-eared Thin Lizzy sticker adorns the door, along with some dubious damp stains on the walls above the cafeteria-style benches: a revamp here is well overdue.

“Monday to Thursday, this will be an education space and a set of recording studios and practice rooms, as part of our plans to create a National Centre for Inclusive Excellence,” Nick says, sidestepping several beer kegs and a large pile of worn out red velvet seat cushions. “Friday to Sunday, it will be a late-night venue and a nightclub with an entrance onto Colston Street. It’s very exciting to be coming into this space and using it properly at last.”

The final part of the building that will be transformed during the works is a surprising space that the public has never had the chance to see, and that will be turned into offices during the remodel. Through an archway on Colston Street and up several flights of stairs decorated like an old-fashioned school corridor is the once grand and high-ceilinged apartment of Colston Hall’s caretaker. 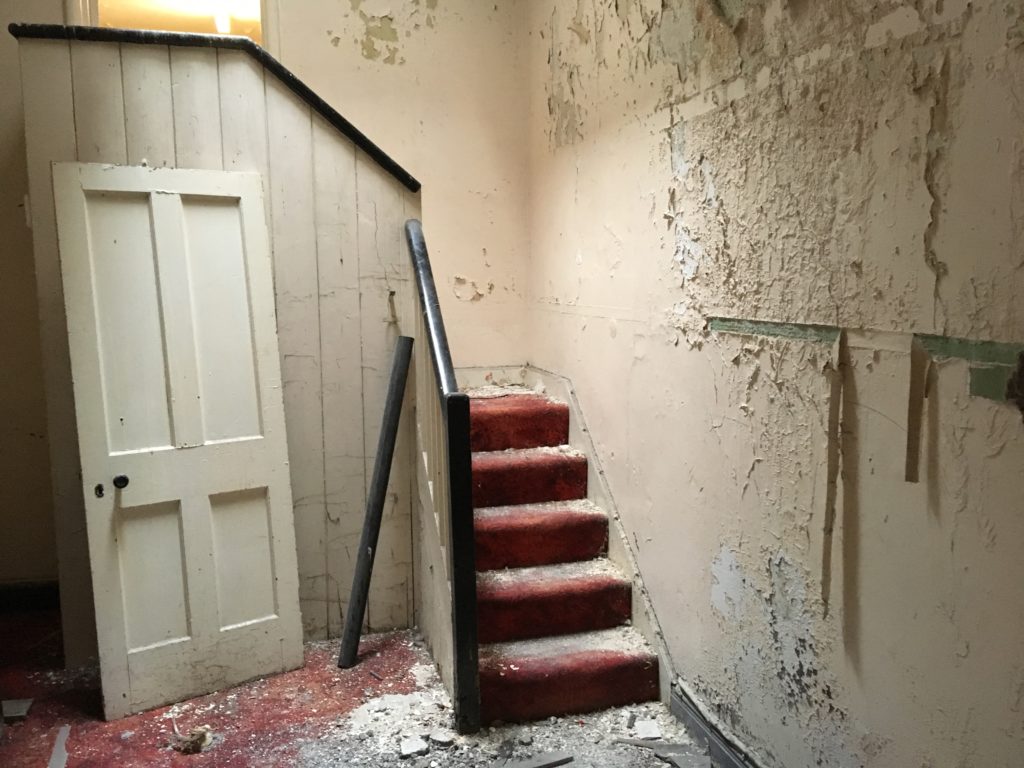 The caretaker’s flat has been left to decay for over 40 years, but will be remodelled during the works

When the Colston Hall was built in 1876, more as a town hall for the people of Bristol than a cultural venue, the flat was built into it as a place for the caretaker to live. The family of the final Colston Hall caretaker left the flat in the 1970s, and it has been left to the pigeons ever since, the ruined rubble-strewn fireplace in the enormous main sitting room splattered with feathers and droppings.

Past the vivid green bathroom, with its peeling claw-footed tub strewn with a stained copy of The Bristol Post from 1985, and through a room once used as an office with a metal filing cabinet filled with old cheques, the strains of the organ float once again, coming from a tiny room with a ceiling partly covered in cardboard soundproofing. The only light comes from a smeared window half covered in a curtain, but which looks out over the entire stage and auditorium. This was once the BBC’s recording room for live broadcasts of classical concerts, and Chris’ fingers dance on the organ now as they would have 60 years ago.

“The Hall is essential,” Nick says as we return to fresh air. “We get people turning up and saying ‘I sung on that stage’, when their children are coming here to play a concert. It’s a place that’s in people’s psyche. There’s no denying it has a big place in the hearts of a lot of people.” And how does he feel to be on the cusp of saying goodbye to some of the parts of this Hall – perhaps forever? “It’s exciting now. It was in my job advert 15 years ago to see this refurbishment happen – we’ve been planning it since 2004. There’s so much to do and we’ve had ups and downs but we’ll get there now.”

The Colston Hall will reopen in 2020 with a new name. Find out the latest news about the redevelopment by visiting www.colstonhall.org