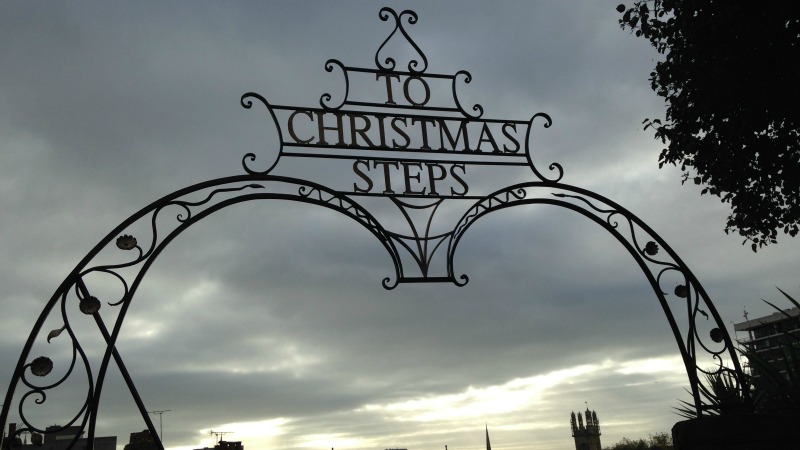 What better thoroughfare to check out as the city turns all Christmassy but Bristol’s most festive street:

1. In medieval times, Bristol’s population outgrew the ancient walled city, and overflowed from St John’s Gate up the steep hillside around Christmas Steps onto St Michael’s Hill. Its medieval name was Queene Street. It later became known as Knyfesmyth Street after those who traded there. This name may gradually have been corrupted into the ‘Christmas’ of today.

2. Others suggest that the name may be derived from the nativity scene found in a stained glass window of The Chapel of the Three Kings of Cologne, which lies at the top of the steps next to the Foster’s Almshouses founded in 1490. The almshouses were superbly rebuilt in Victorian times in Burgundian style, copying 15th Century domestic French architecture.

3. It is also believed to have been called Lunsford’s Stairs for a short time, in honour of the gallant royalist Colonel Henry Lunsford who was shot through the heart whilst leading the royalists attack on Bristol in 1643 during the Civil War. He is commemorated with a plaque towards the top of the road.

4. A statue of the Madonna and child is said to have been beheaded by Oliver Cromwell himself. It used to be outside the chip shop, feet rubbed smooth by generations of people hoping to gain good luck, and can now be seen just inside St Bartholomew’s Court.

5. St Bartholomew’s Court was the founding location for both Bristol Grammar School and Queen Elizabeth’s Hospital, who used the building as a school until 1847. It was most recently offices including former regional film agency South West Screen and has now been converted into flats.

6. These two figures in niches on the wall above Fotohaus were removed from the Merchant Venturers’ Hall in Marsh Street.

7. A stone plaque commemorates how the street was “steppered done and finished in September 1669” to create the cobbled slopes and steps which remain today.

8. The Christmas Steps pub was previously the Three Sugar Loaves and was known as the Gaiety from c. 1978 to c. 1960. The pub dates from the 17th century and occupies a site that used to be one of Bristol’s 20 or so sugar refineries.

11. This building thought to date back to the 13th Century was one of the first ever fish and chip shops to open in England. It’s now been a chippie for more than 100 years.

12. Above the chip shop is a metal plaque erected by the Royal insurance companies to signify that the property was insured by them.

13. Christmas Steps is an 11-minute long instrumental by Scottish post-rock group Mogwai. The original version of the song is the lead track from the 1998 EP, No Education = No Future (Fuck the Curfew). A slightly different version appears on the 1999 album, Come On Die Young.

14. Christmas Steps ale is brewed by Butcombe brewery. Best Maris Otter is blended with a precise selection of malts that together lend the beer a reddish hue and a distinctive and fruity blackcurrant finish.