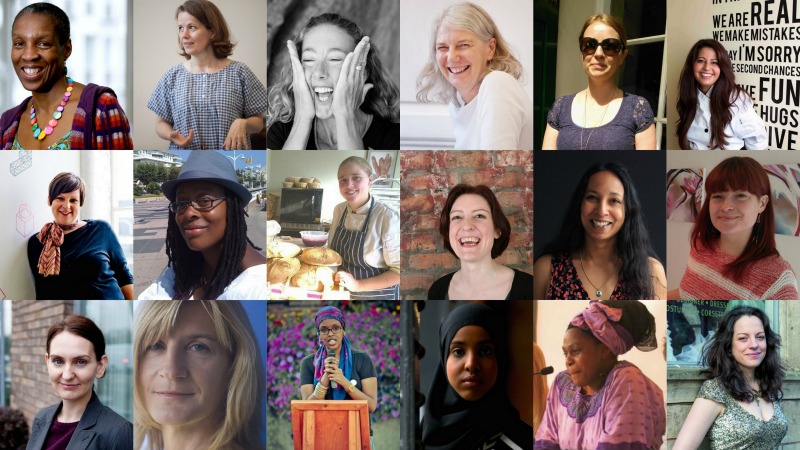 Brilliant and inspirational, here are 18 downright awesome Bristol women to be celebrated as we approach International Women’s Day on Sunday. Have we missed anybody off this list? Please let us know.

2. Amirah Cole
Director of the Malcolm X Community Centre, on the organising committee of St Paul’s Carnival and a parent activist.

3. Anna Rutherford
Anna was a scientist before founding Pride Festival, joining In Between Time and becoming chair of Bristol Festivals.

5. Chrissie Wellington
One of the greatest sportswomen of all time. A four-time Ironman champion and world record holder, now inspiring others.

6. Clare Reddington
Such an integral part of the Watershed set-up that a new position of creative director was created for her last year.

7. Fahma Mohamed
A teenager from Barton Hill who led an inspired campaign by Integrate Bristol to change government policy towards FGM.

8. Gill Cockwell
Better known as Gilly Woo, who designs and sews bespoke clothing from her studio and workshop in Stokes Croft.

9. Helen Legg
The inspirational leader of Spike Island, now far more than just a gallery. And one of the judges of the Turner Prize.

10. Jaya Chakrabarti
CEO and founder of digital agency Nameless, sits on many boards and chair of democracy organisation Bristol Manifesto.

11. Laura Hart
From baker to businesswoman, Laura’s creations are found all over town – made in the buzzing Hart’s Bakery at Temple Meads.

12. Lorna Knapman
Creator of the ever-popular Love Food Festival and curator of Food Connections, returning in May for its second annual outing.

14. Nimko Ali
Co-founder and CEO of Daughters of Eve, a non-profit organisation against gender-based violence; feminist; and campaigner.

15. Romy Gill
Chef-owner of Romy’s Kitchen. Romy is one of very few female head chefs who runs their own Indian restaurant in the UK.

16. Ruth Pitter
Manages a number of Voscur projects for the day job, as well as vice chairman of theatre group Breathing Fire.

17. Sally Cookson
The visionary theatre maker and director of some of the best shows to be staged in Bristol in recent years.

18. Simone Kidner
Founder and manager of Co-Lab, a rose among the Broadmead thorns encompassing a shop, gallery and work space.