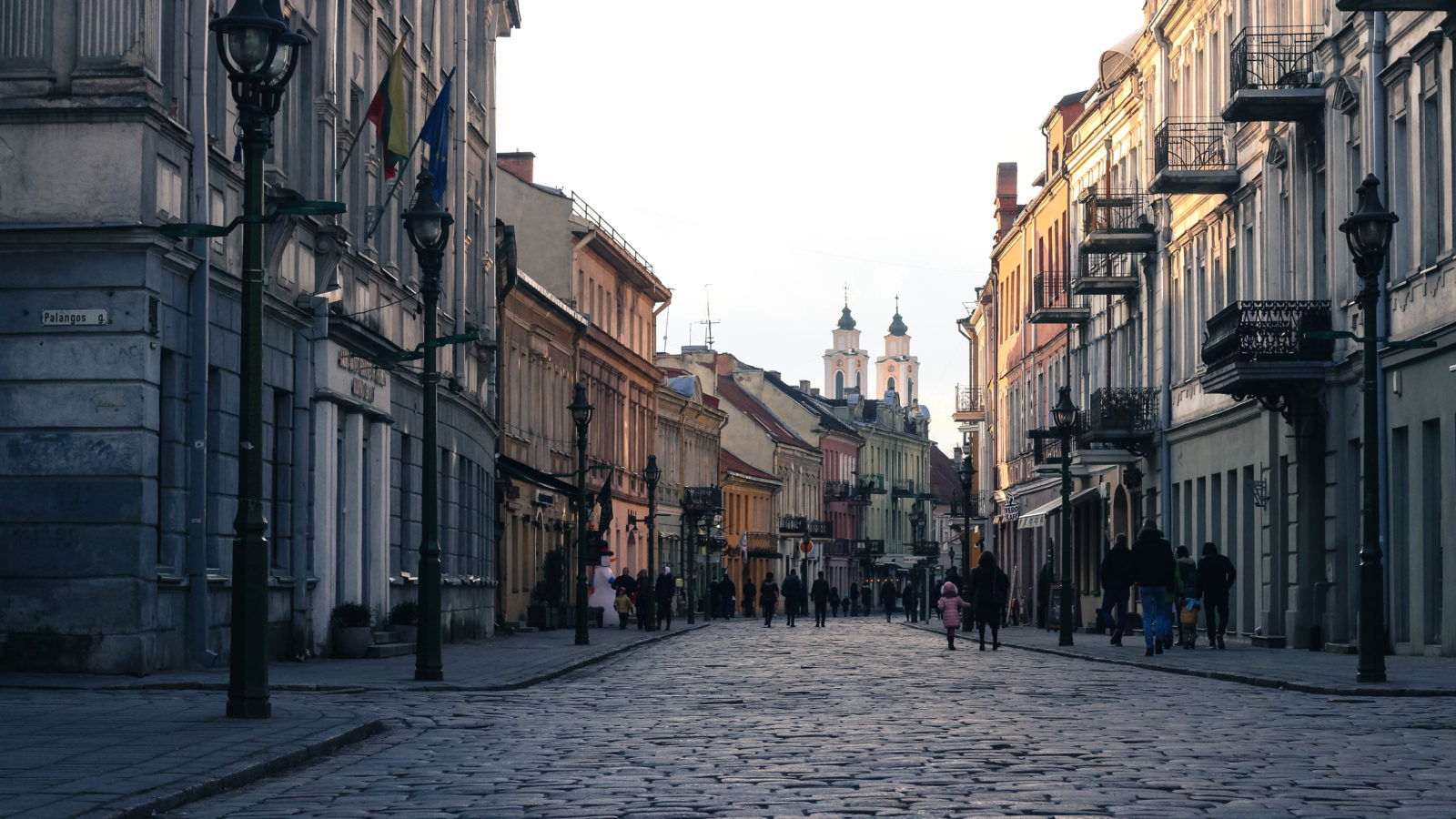 In 2018, Lithuania celebrates a century of independence. Despite having endured bloody occupations from Russia and Germany since then, the people of this small nation have remained true to their culture, language and beliefs throughout turbulent times. After emerging from the Iron Curtain in 1991, the country has undergone a new wave of reinvention with a fast-developing arts scene. Events building up to Kaunas being European City of Culture in 2022, coupled with the centenary, make the country an exciting place to visit this Spring.

Lithuania’s second city, Kaunas, is a little under three hours from Bristol by Ryanair. The airport is 14km from the city centre but a bus ticket costs just €1, and you can also catch direct buses to other cities including the capital, Vilnius, and Riga in neighbouring Latvia. Display screens by the luggage carousel even tell you how many seats are still available.

Kaunas sits on the confluence of Lithuania’s two longest rivers, the Nemunas and the Neris, and legend has it that couples who stroll through Santakos park at the site of the confluence will, like the rivers, join and never split. Overlooking the park is the ruined 14th century castle, gateway to the Old Town with its historic churches, museums, bars, restaurants and cobbled Town Hall square. 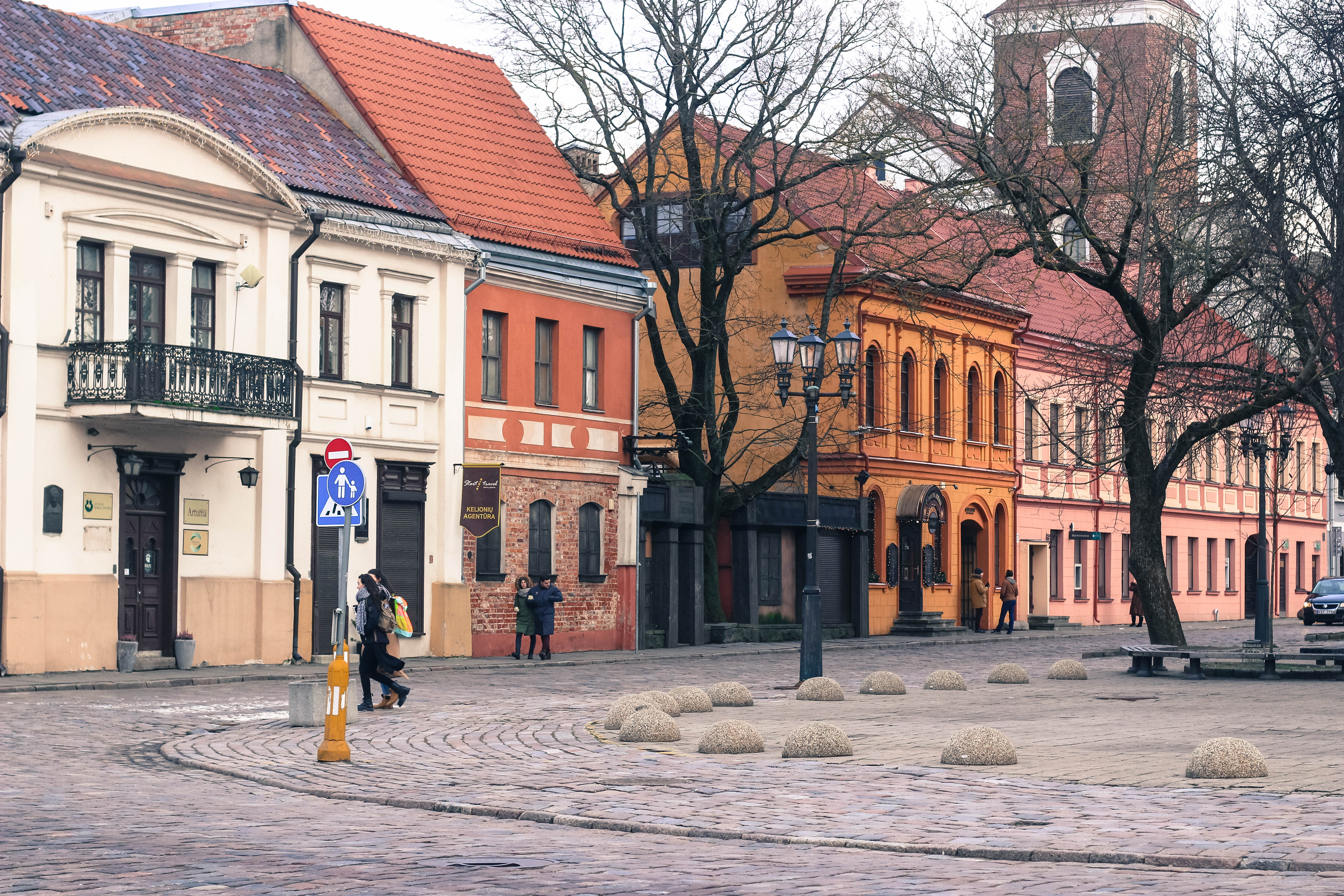 Lithuania’s second city, Kaunas, has a compact Old Town that is quiet and largely car-free

From the Tourist Centre on the square, pick up the pedestrianised Vilniaus gatvė (which turns into Laisvės alėja, or Liberty Avenue) for a car-free 2.5km stroll through the old and newer parts of the city. The wide tree-lined boulevard is crowned at the far end by the domed Neo-Byzantine architecture of St Michel the Archangel, built for the Tsar’s armies just before Lithuania gained independence from the Russian Empire.

Unpicking Lithuania’s complex history of invasion and independence through its varied architecture is vastly aided by a guide, and Linas Daubaras, president of the Lithuanian Association of Tourist Guides, is one of the best (tours cost €20 per hour). Be sure to look at the Modernist interwar architecture on Putvinskio gatvė, for which the city is famed, and take in some of the street art that is becoming more popular Kaunas – Yard Gallery  is an interesting introduction to the scene, with English expositions.

Kaunas is easily seen by foot, with most hotels (Hof Hotel is a comfortable option at £42 for a double room plus breakfast), churches and museums within a block of the main pedestrian street. The back-to-back Vytautas the Great War Museum (€2) and MK Čiurlionis Museum of Art (€4) are the most impressive, while the hands-on Lithuanian Folk Music Museum (€1.80) is great fun. 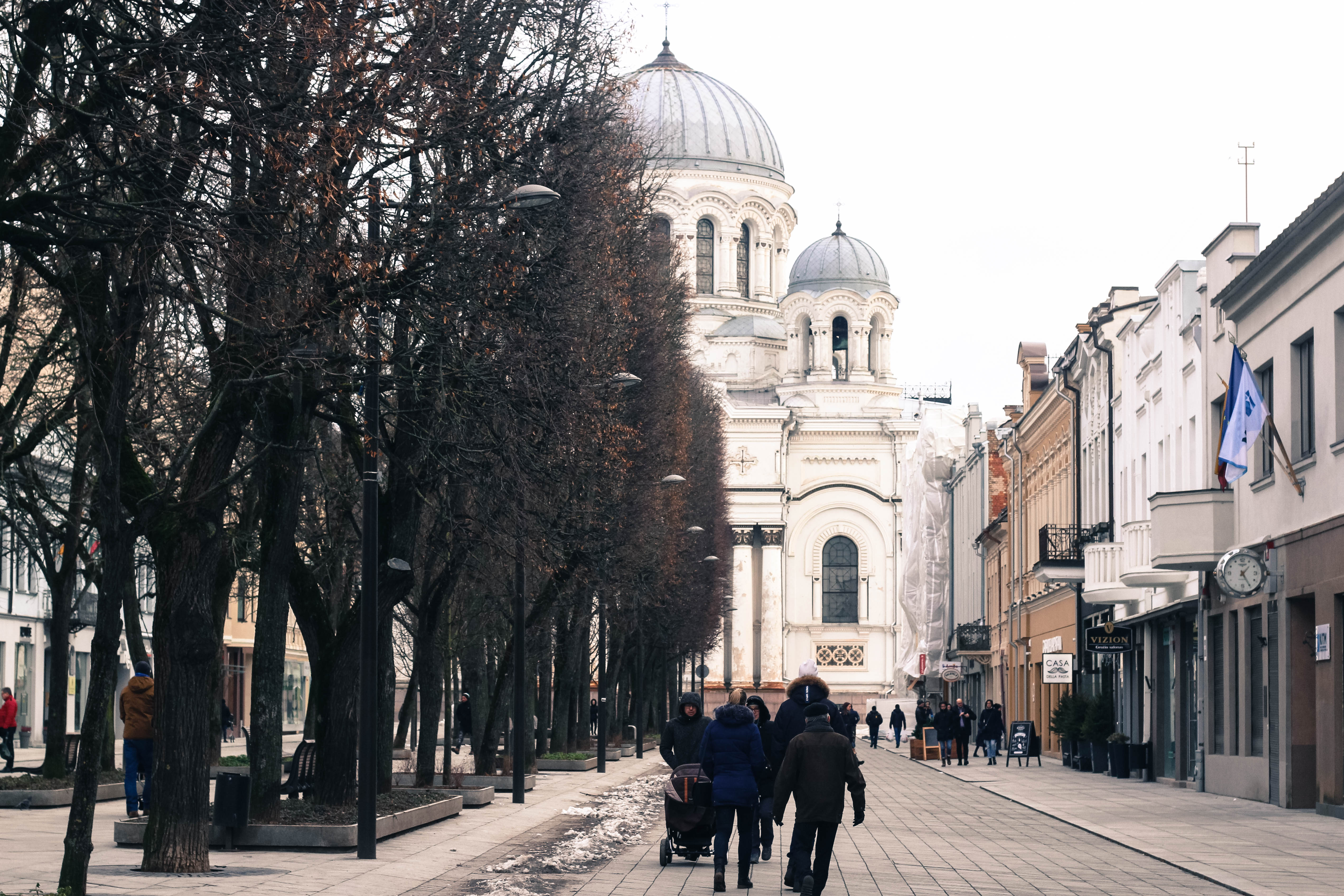 Liberty Avenue, a wide pedestrian boulevard, links the old and new parts of the city

It’s also worth taking the 1930s Žaliakalnio funicular railway (70 cents) to reach Christ’s Resurrection Basilica. A Modernist masterpiece of clean white lines, the 70-metre tower dominates the city from its hilltop position and offers outstanding views from its roof terrace (€2.40 via lift or €1.20 if you take the stairs).

Around 7km out of the city and most easily reached by car (hire from Sixt at the airport), is Pažaislis Monastery. The sisters of St Casimir still occupy the cloisters, but the abbey is open to the public (€4) and is lauded as one of the most beautiful Baroque buildings in the country. The soaring black-and-pink marble interior was designed by Italian architects and is covered in intricate frescoes. Carefully descend the stairs near the side entrance to the crypt, where monks’ bones still rest. 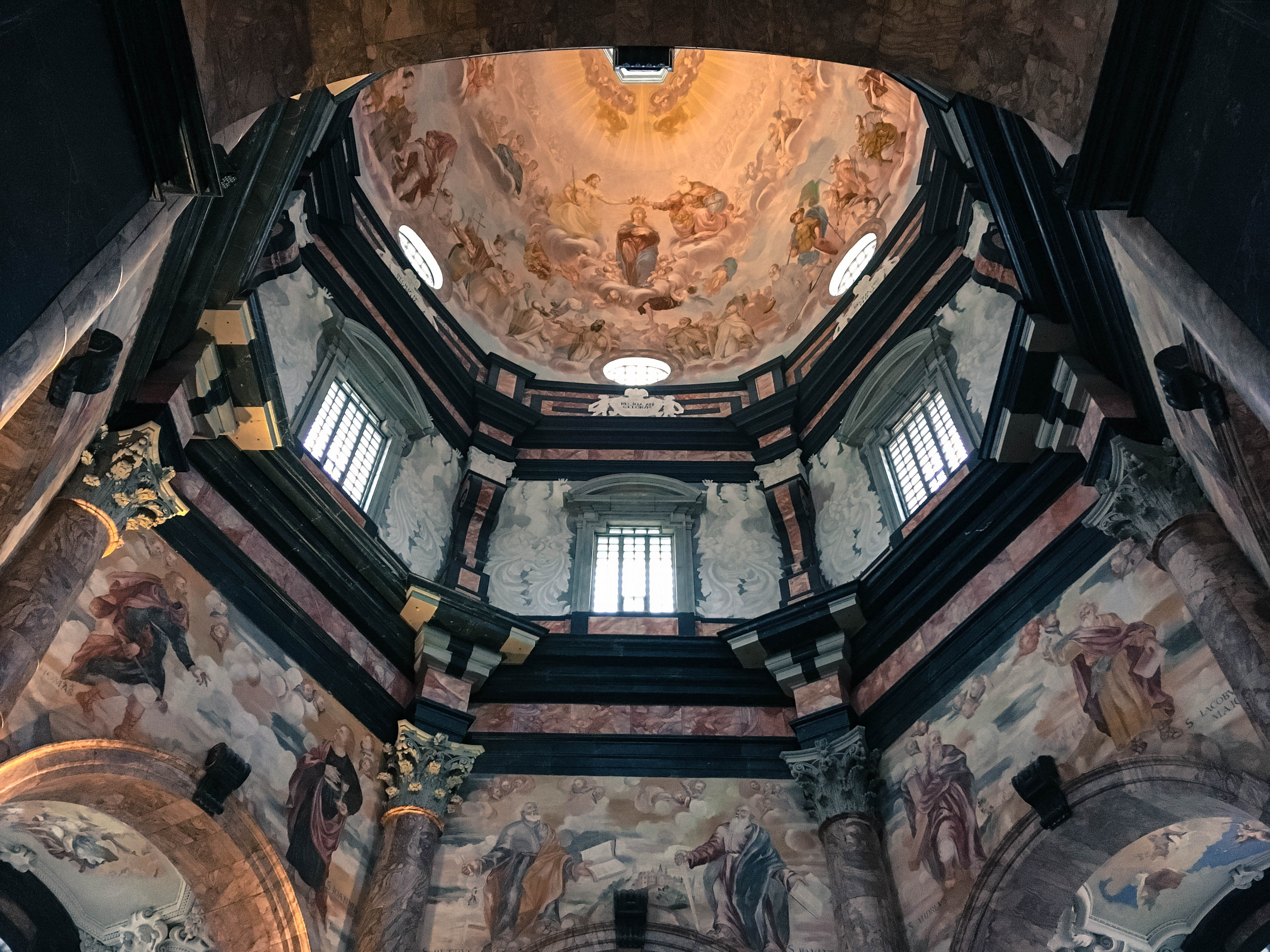 The incredibly intricate interior of Pažaislis Monastery, with pink marble and painted frescoes

Built near the shore of Kaunas Reservoir Regional Park and set amongst the dense woodland that covers a third of the country, part of the monastery has recently had an impressive update thanks to an EU grant. It’s now home to the Monte Pacis restaurant and luxurious 13-room hotel.

The restaurant is hailed as one of the best in Lithuania (try the local wild grouse), and is joined in that accolade by Nüman in the Old Town. The quality and ingenuity of the three-course tasting menu (€30) – from tender Australian beef covered in blueberry ‘leather’, to dessert served with a pine needle reduction – is extraordinary.

Around 100km southeast of Kaunas is the capital, Vilnius. Take the double-decker train from the grand old station (from €4.80 one-way) and you’ll find yourself in a larger city with much of the same charm. The Old Town of Vilnius is extensive – only Prague’s is larger – and the sights come thick and fast as you walk the cobbled streets. Entry fees can quickly add up, so a CityCard is a wise investment (from €20 for 24 hours). 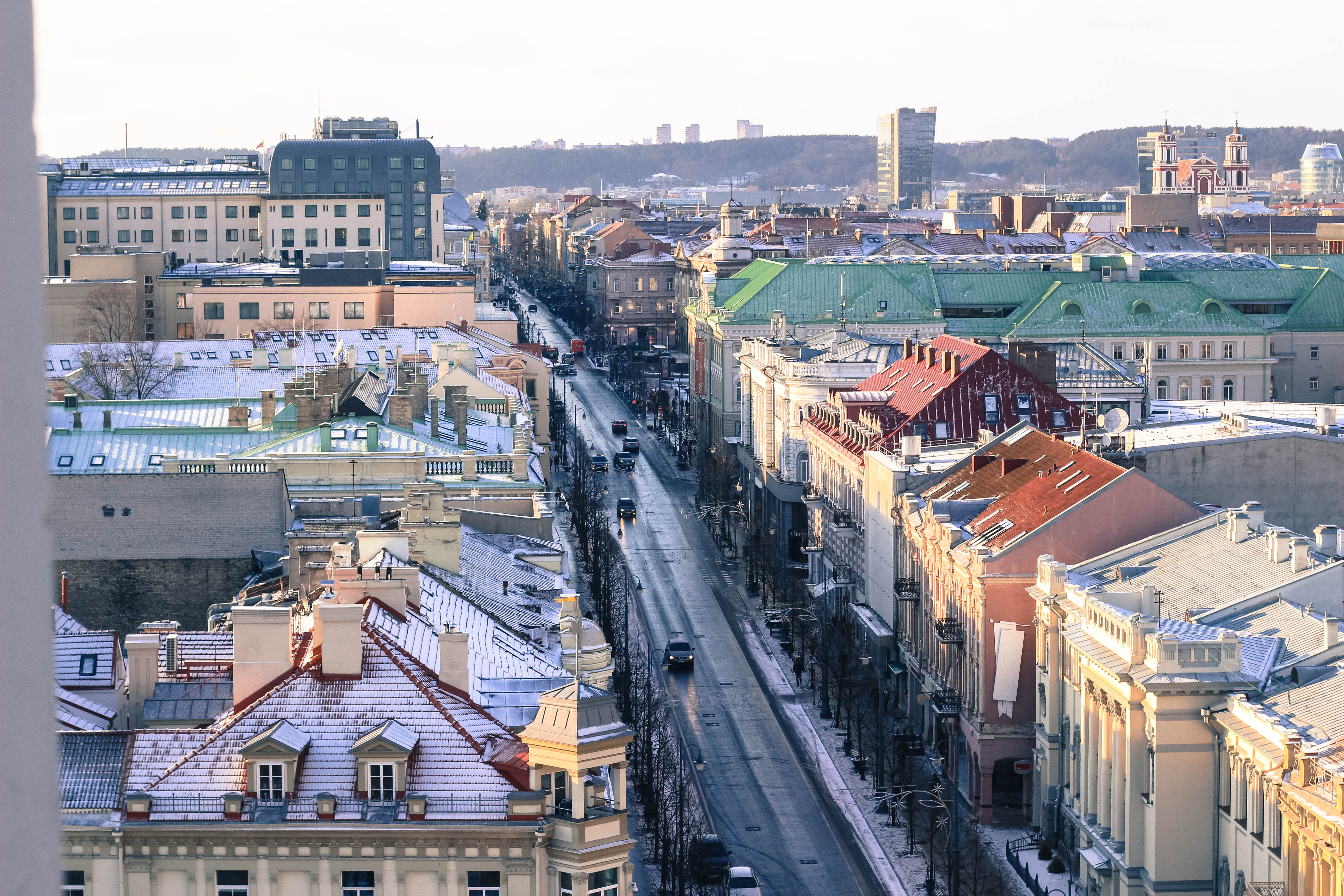 Vilnius has a much larger Old Town than Kaunas, but they share the same welcoming feel

From the south end of town, the Gates of Dawn is a 16th century city gate and religious site, steeped in history and Catholic superstition. Stroll along Pillies gatvė to find small cafes, souvenir shops selling amber and an impressive view up to Gediminas Tower, the fortress sitting atop an impossibly steep lump of land (€5).

In the adjacent streets are some of the major museums, churches and galleries: the House of Signatories (free entry) rises to prominence this year as it displays an original signed 1918 independence treaty, recently rediscovered in Germany, while Literatų gatvė displays a unique collection of open air street art, created by writers who have lived in or visited Vilnius. 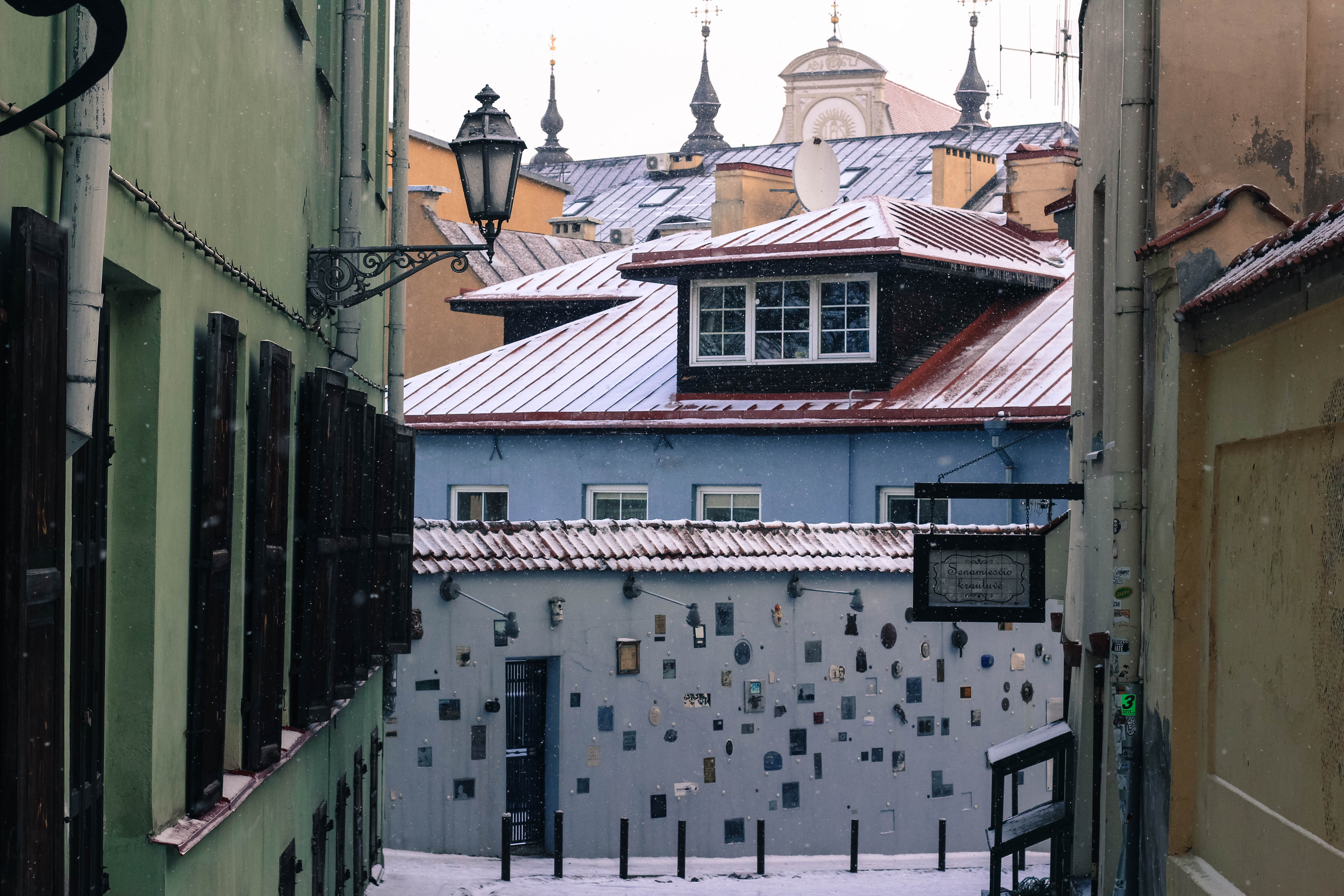 At the north end of the Old Town, close to the river Neris, is Vilnius Cathedral with its impressive marble interior and separate belfry (€4.50), from which you get panoramic views. Three white crosses, destroyed in the times of the Soviet Union but now reinstated, sit high on a nearby hill, watching over the city and its many churches. Crossing the river to the east, St Anne’s, a 16th century church built in a unique Gothic style, has one of the most impressive exteriors, while the Russian Orthodox Church of the Holy Spirit has a fabulous green gilt interior.

For food and drink, the range of options at Halės Turgus is unbeatable. The site of a market since the 15th century, it is full to the brim with fresh local produce, including steaks, cheese, wine and bagels. Lithuania is known for its cafe culture, so for some real luxury try one of the exquisite patisseries at Sugamour.

Once you’ve finished the last slice of dark rye bread, munched another cepelinai (pork and potato dumpling) and polished off just one last Lithuanian craft beer, a minibus (€10) will take you directly back to Kaunas Airport from opposite Vilnius railway station, just in time for a flight back from this vibrant little corner of Europe.

To plan your trip to Lithuania, see www.visit.kaunas.lt/en and www.vilnius-tourism.lt/en.