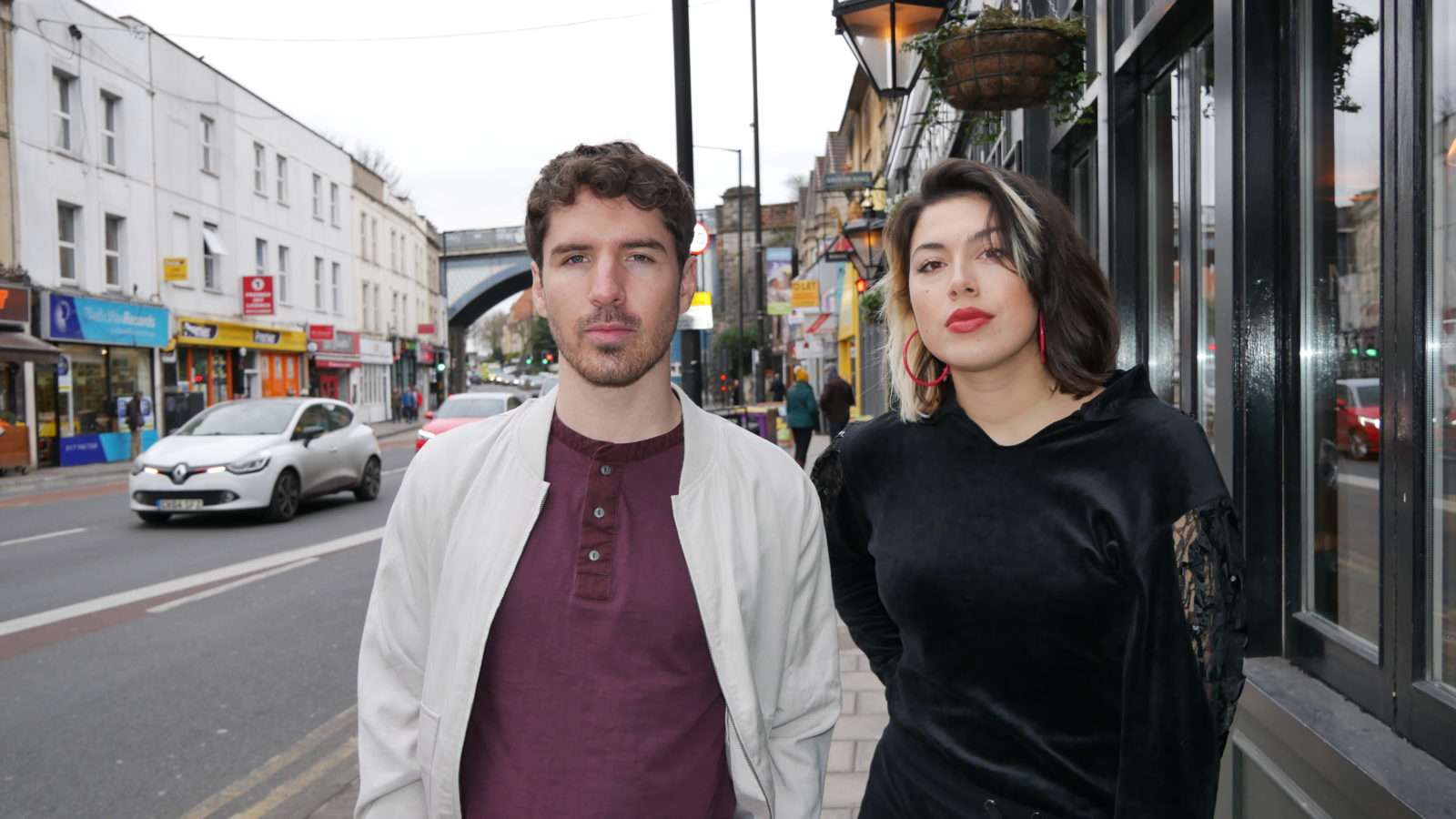 Redland-based electro indie-pop duo Mauwe have been tipped for the top by BBC Introducing in the West and have just released their latest record, Balcony Dreams.

With a shared love of music, Bristol, and charity shop hopping, the duo were happy to accept the challenge of find two outfits in one morning from their local charity shops on Gloucester Road.

“Gloucester Road is the best place for charity shopping in Bristol,” says Portia Conn, one half of Mauwe, as she strolls past a row of independent shops.

“I don’t really like any fashion designers. I just wear what I like. My style is quite ‘Bristol’: slightly hippie with a twist. It’s quite a common look here. I don’t dress that way to fit in, I was already like that. Bristol attracts like-minded people, I guess. I mix and match charity buys with new clothes.” 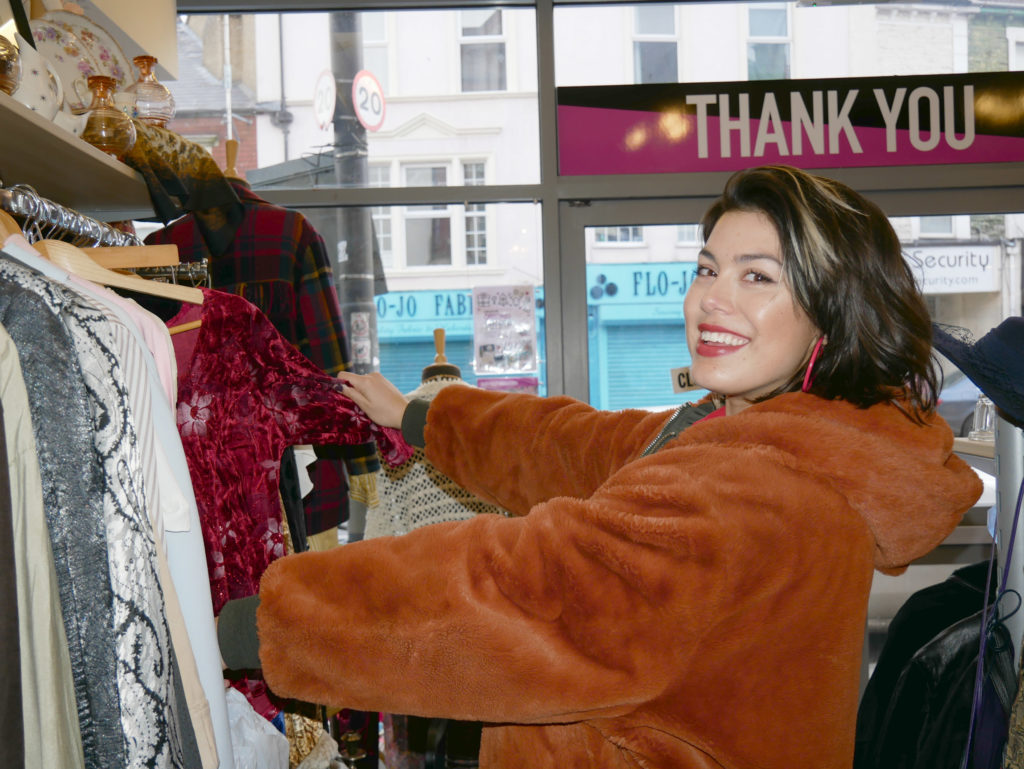 Having briefly gigged in their hometown of Stratford-upon-Avon, Portia and Jay Rodger formed Mauwe formed in Bristol at the beginning of 2017.

“I came to Bristol first,” says South Africa-born Jay. “We didn’t really know each other that well in Stratford; we did the same gigs with different bands. It was only when we moved to Bristol that we started to work together.” 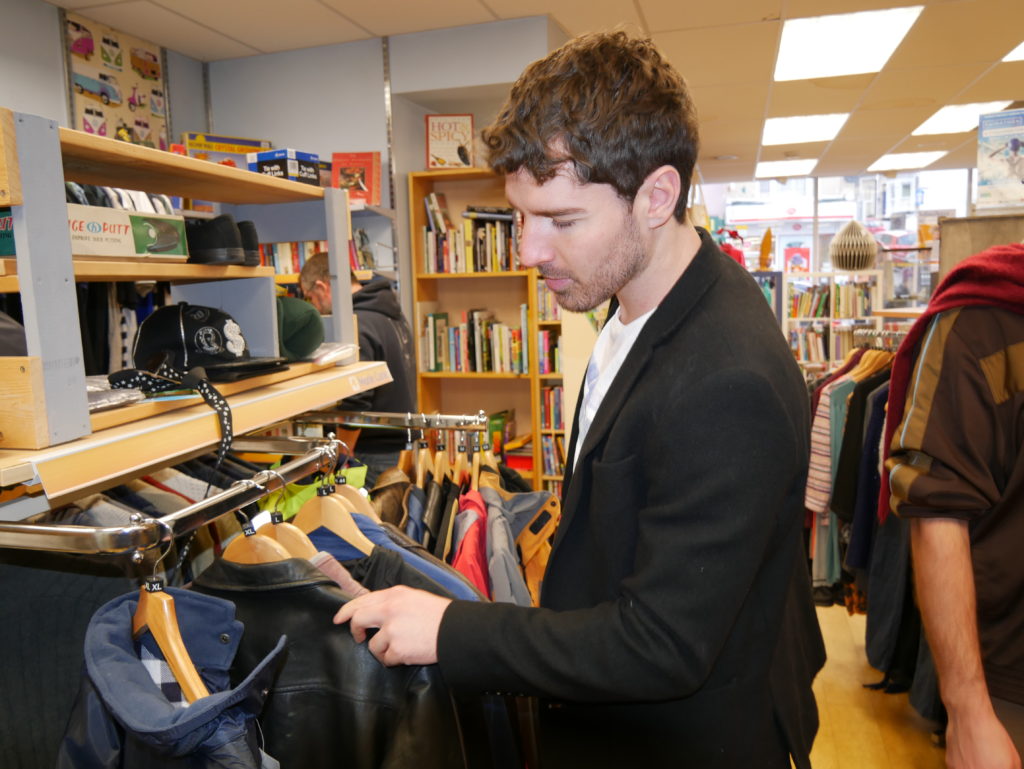 As singer/songwriters, Mauwe combine their backgrounds in folk, pop and music production to create the down-tempo electro sound that has seen them named as one of Bristol’s top breakthrough acts of 2019.

“At the moment we are looking more towards dancier tracks, not club-based stuff but a dance music sound,” explains Jay.

“We want to have a bit of a mix and work towards an album,” adds Portia.

“We are putting out tracks that we think work together. BBC Introducing South West have been really supportive and have shared all of the tracks we have put out!” says Jay. 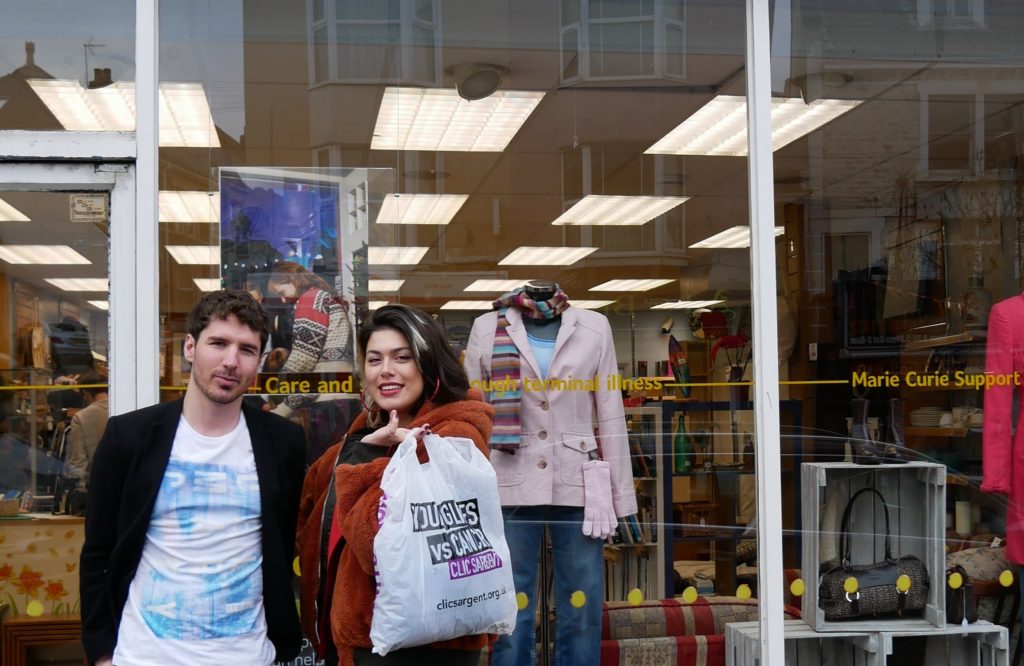 After a morning’s thrift shopping session finished, team Mauwe present a selection of outfits that they would wear on stage with the potential to be dressed up for the festival season.

Portia wears a black velvet catsuit that is embossed with a glittery, floral pattern, which she has paired with a bright red shirt that has a lace up detail. For a second outfit Portia has chosen a black bodysuit, also in velvet, with lace shoulder panels and styles up both outfits with red earrings, lipstick and a pair of Dr. Martens boots. 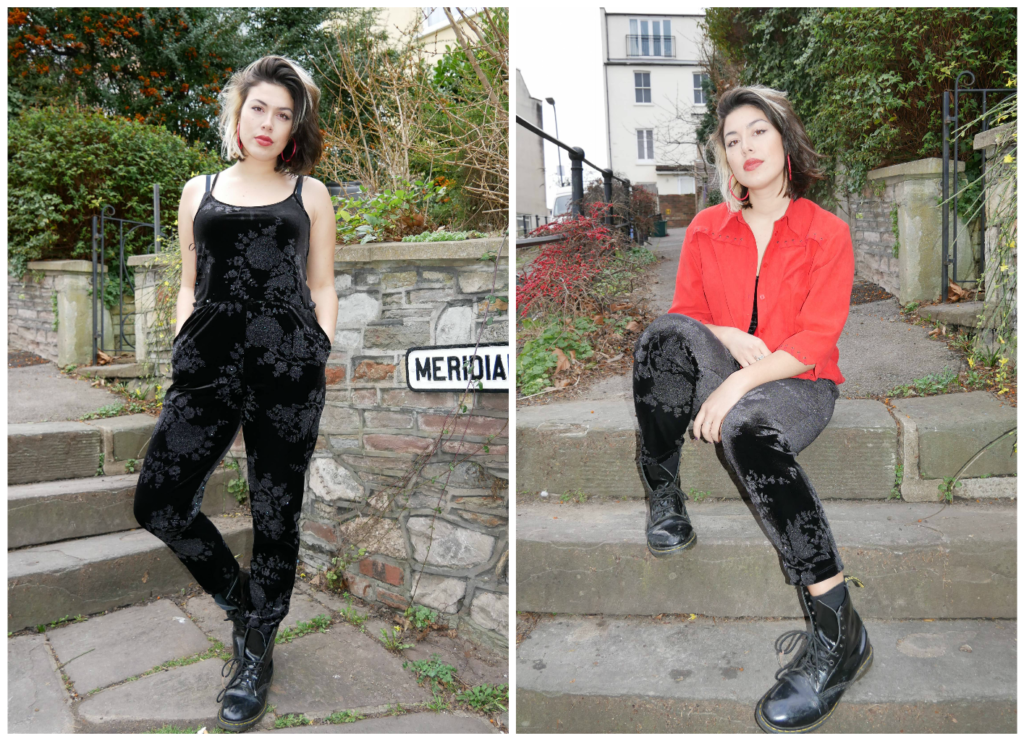 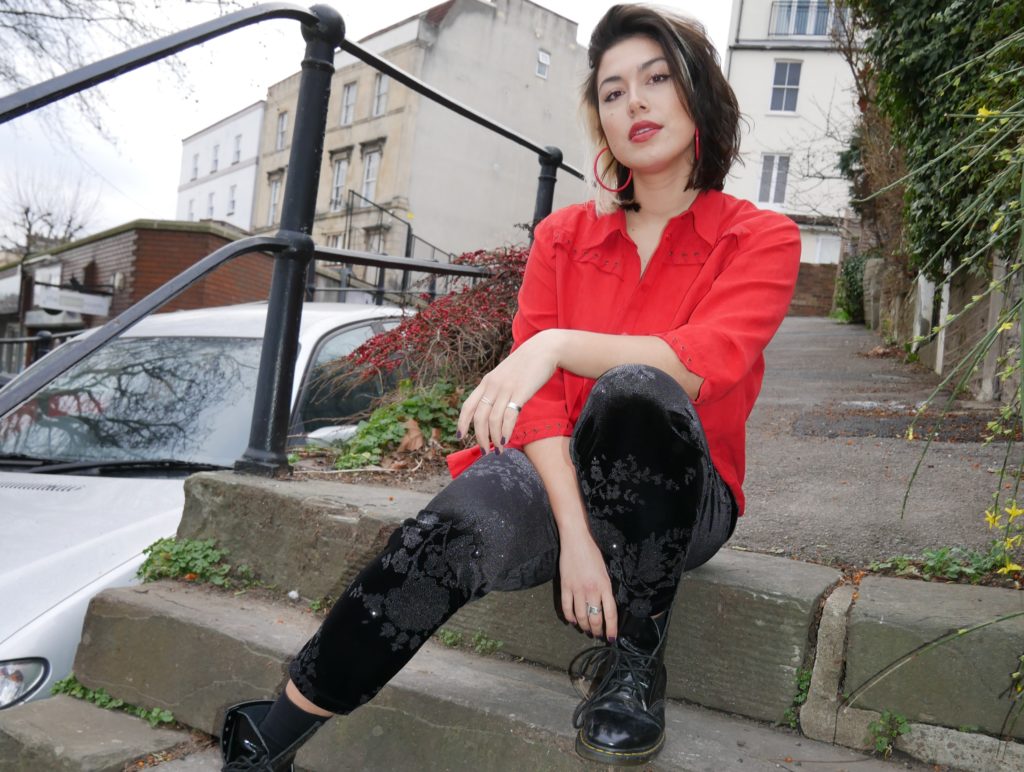 “I love the velvet catsuit,” says Portia. “I could wear it with something underneath as a day outfit too. I thought the red shirt was quite casual but also a bit more out there.

“Both outfits are quite similar and I would wear them for stage or as an everyday outfit. If you were really daring you could wear the bodysuit on its own with tights or leggings, or with a skirt over the top. It initially had shoulder pads but I got them cut out. I like that I have the options to dress both outfits up or down.” 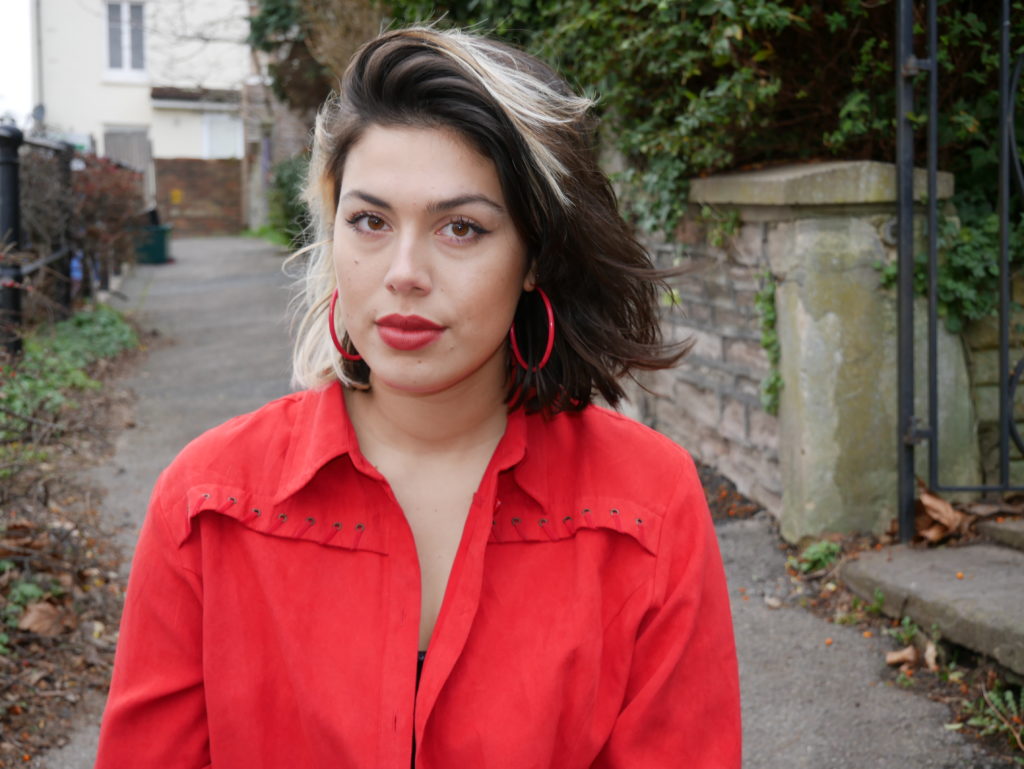 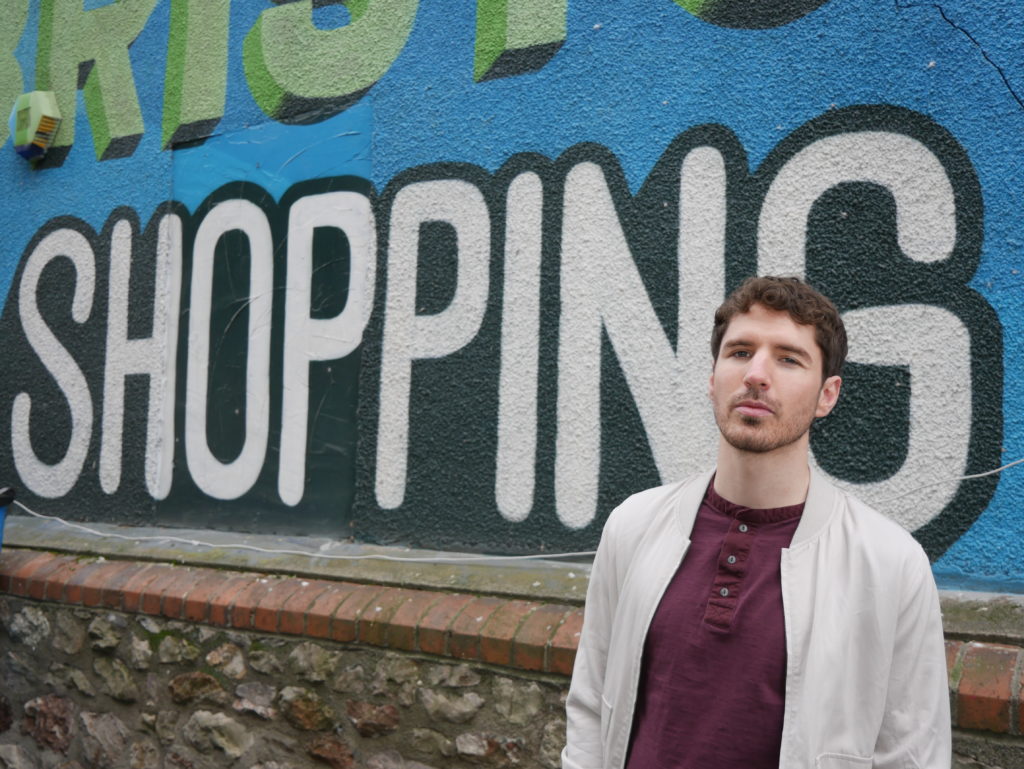 Jay is much more laid back in mannerisms and style. His go-to outfits are bomber jackets, blazers and T-shirts but he is keen to become a bit more creative in what he wears.

“I have my own kind of style and I’m trying to branch out from that at the moment and get more experimental,” confesses Jay as Portia teases him about wanting to wear dungarees. “I do not want to wear dungarees, Portia!” he corrects her with a grin. 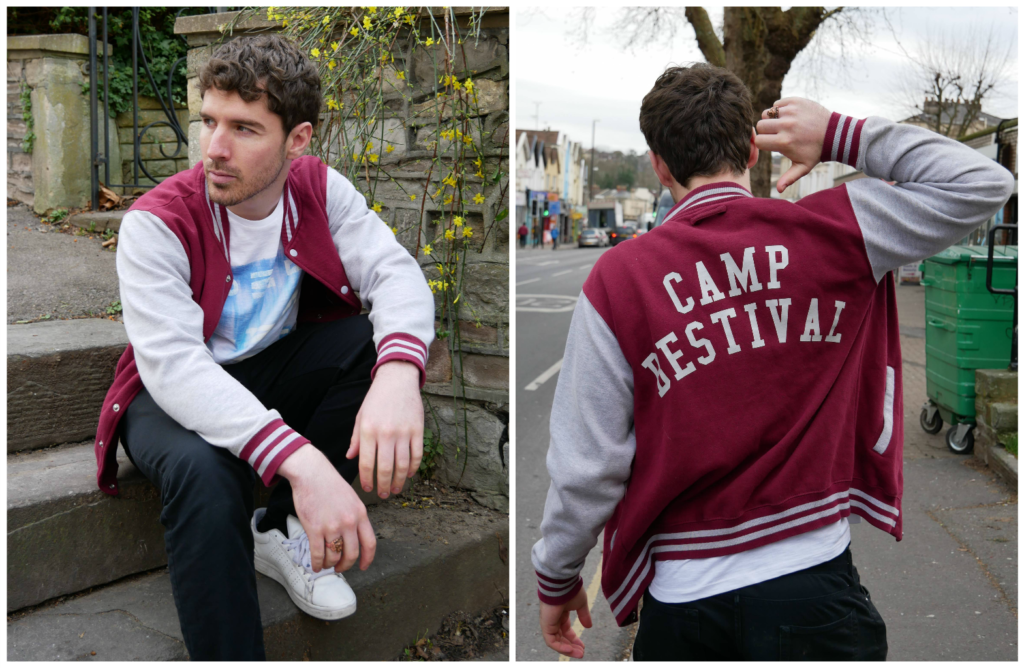 Jay models his varsity jacket (£5) and Del Mar City T-shirt (£2), both from the Marie Curie charity shop on Gloucester Road

“I went for a retro varsity-style jacket – it’s a classic and was only £5. I also found a retro bomber. I do like a bomber, and I like blazers too. I chose this Del Mar City T-shirt because my favourite artists at the moment are Lewis Del Mar, so it jumped out at me,” Jay says/

“There are so many charity shops on Gloucester Road and lots of options.” 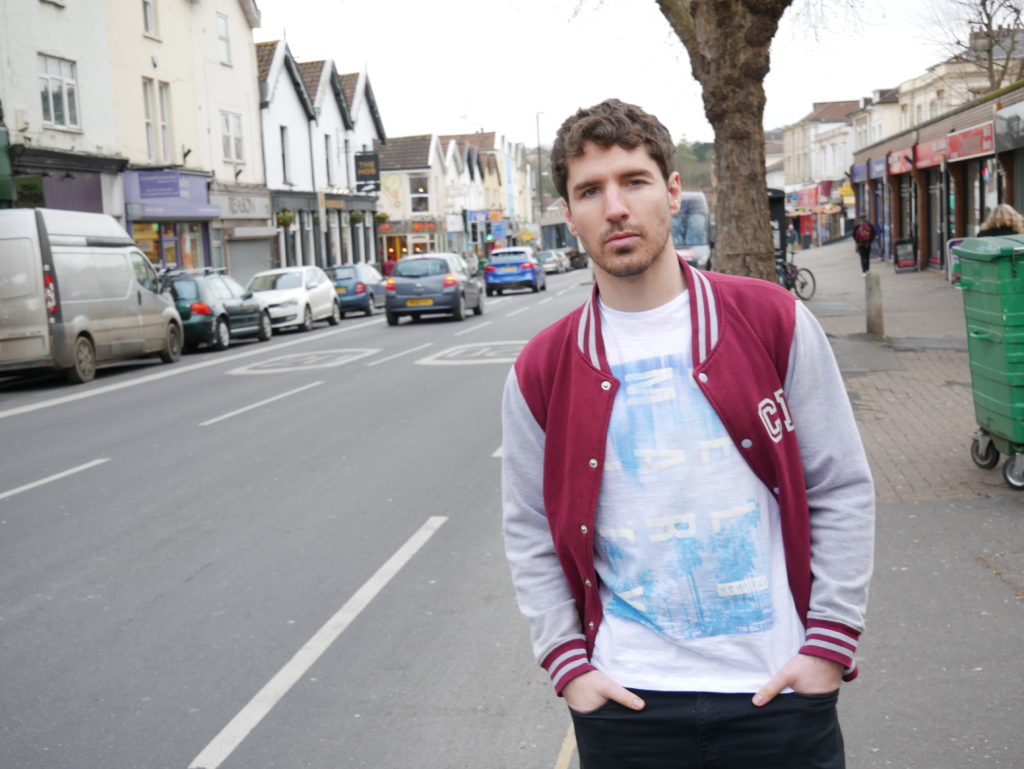 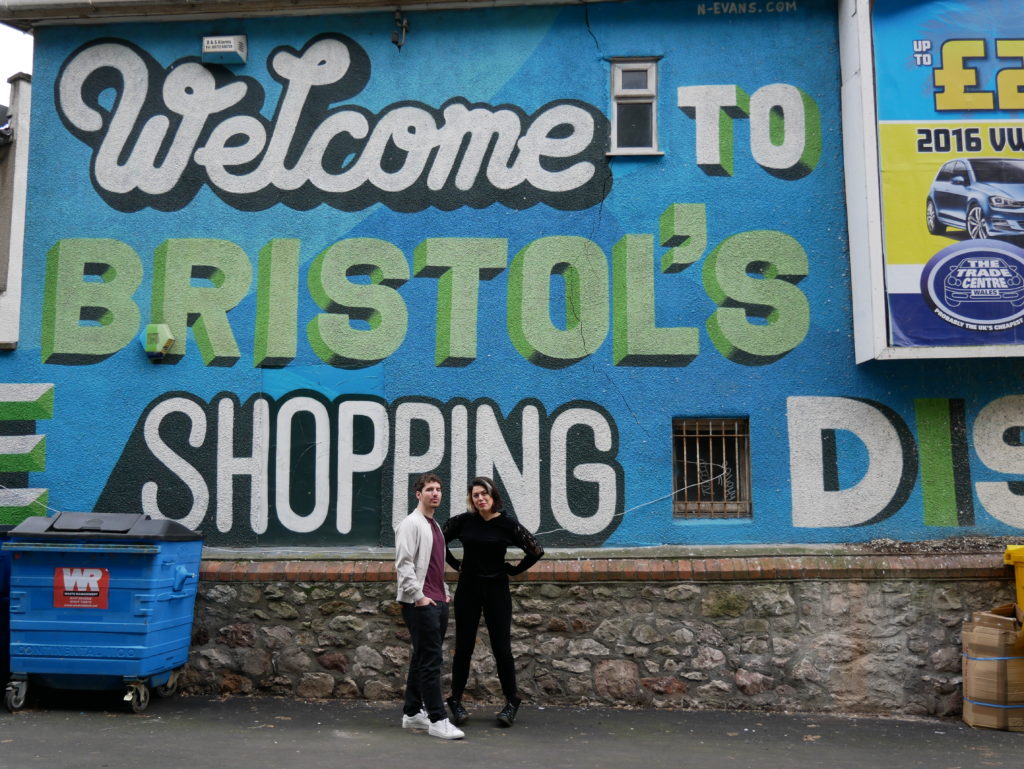 Two of the day’s charity shops in particular made the grade in Mauwe’s fashion book: the Marie Curie shop where Jay found his classic varsity jacket, and CLIC Sargent, Portia’s favourite shop by a mile, which mixes classic charity shops finds with vintage gems.

“We like to keep it local with our style, rather than working with stylists and jumping on Topshop and labels,” Jay says. “We’d like to get more independent brands involved with us. We have our own style and we want to stick to it.”