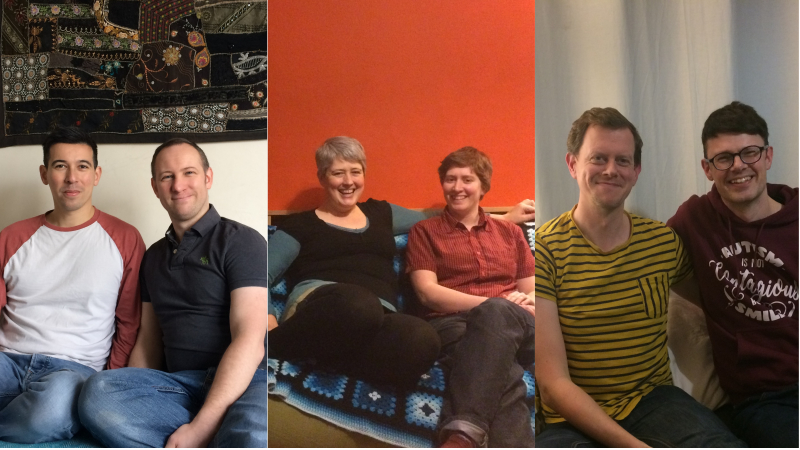 From March 5-11, LGBT Adoption & Fostering Week celebrates those who have become parents, and the opportunity thousands more have to follow in their footsteps.

While same-sex couples have had the right to adopt since 2002, stigma and a lack of supportive legislation have deterred some. Across England, Scotland and Wales, around one-in-ten adoptions are now by same-sex couples, with the total number of adoptions by same-sex households now approaching 3,000.*

Bristol24/7 meets three families to hear about their experiences of adopting: 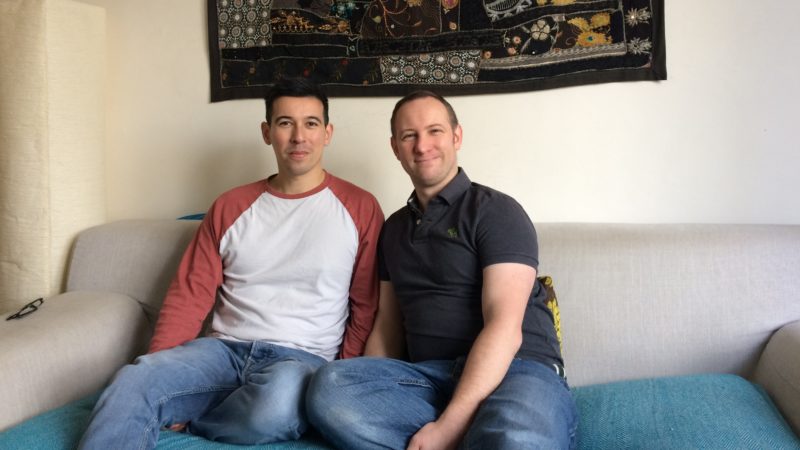 Stephen (L) and Simon (R) completed the adoption process a week after getting married.

Adoption is no brief process. The first stage assesses suitability and then, following approval, the matching stage looks to pair potential parents with a child.

“We know couples that looked for over a year – but, for us, it was really quick,” Simon says. “We did look properly,” Stephen interjects laughing: “we didn’t pick on impulse!”

The pair married one Saturday and on the following Monday completed the process. Simon says: “We decided to get married before the panel to approve our adoption. We were never going to get married but we decided to do it for the child – how many times have we heard that before!”

“There was a slight challenge to us as a same-sex couple,” Simon remembers but says he understood it was for the best of the child. “We were asked if we thought our son would have female role models. We appreciate it is about asking questions the right way.”

Stephen adds: “We’ve been very lucky to have aunts, sisters and female friends involved in our son’s life. But bringing him up to respect women comes from us. What’s damaging is a parent who doesn’t respect women.”

New parents spend an intense and brief two-week period bonding with their adoptive child before becoming a family. “The foster carer struggled a little with the fact that we’re gay,” Stephen says of this handover period. “She thought every child needs a mum. But, she was open and respectful and helped us bond – eventually, she said we would be good parents.”

Stephen and Simon had to master therapeutic parenting. “A good example,” Simon says, “is when one child takes a toy off another. Parents demand they apologise and often the child doesn’t understand what they’ve done wrong.” The couple say it is important to them that their son develops his own moral code. Adoptive children are often more fragile, so shaming them can be crippling. Social workers told them other parents might not agree with their parenting style. “‘Why aren’t you shouting at your child!’, is a classic,” says Stephen.

Three years later the couple can safely say they have done the right thing. “He’s succeeding at school and developed so much,” Stephen concludes.

The pair reject arguments against same-sex adoption based on biology. “There may not be a biological connection but memetically there is. I have known pregnant mothers to think we don’t enjoy the same bond, but our bond with our son is as strong as theirs,” says Stephen.

Simon concurs: “When you think of the number of step-parents that have amazing relationships with their kids, it shouldn’t be surprising that a relationship needs more than biology.” 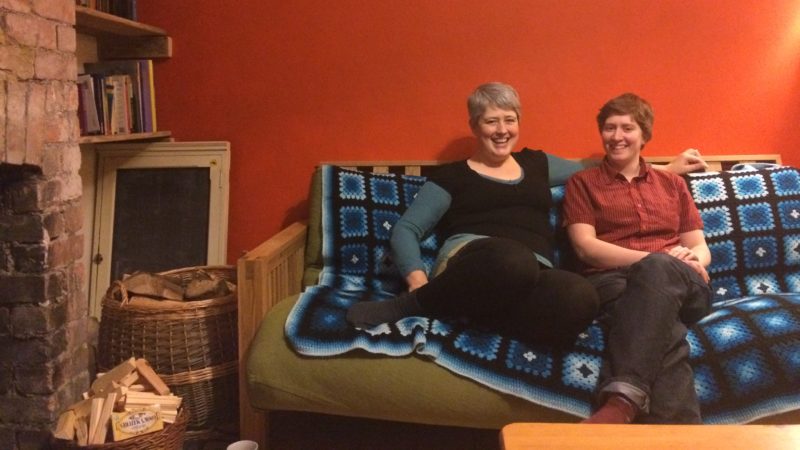 Susan (L) and Frances (R) both find people disbelieve their daughters can have two mums.

“We like having a captive audience,” Frances laughs. “Our friends don’t tolerate us talking about the girls quite so much.”

Susan and Frances adopted two sisters and the process – as long as it is thorough – means they find an interview quite familiar territory.

“You are assessed as a person and your ability to be a parent, but it was like therapy to talk so openly about ourselves,” says Frances. “You know things have already gone horribly wrong for the children, so you need to be tremendously sure because the thought of letting them down is heart-breaking,” Susan adds.

When Susan and Frances first read the profiles, a new feeling hit them. “We were prepared to take on something more and although that initial phone call bombarded us with more information, the hope they could be our children carried us through the bureaucracy.”

Eventually, Susan found out on her birthday that the sisters were awaiting placement.

Over two weeks, the level of time they spent together as a family increased until the sisters arrived at their house in Bristol.

“Their foster carers brought a schedule with their routine covering every 30 minutes of the day – we clung to that like driftwood in a storm,” says Susan. She quickly realised, “there were four very clear dynamics in the house and six different relationships – their personalities are formed and you need to meet both their needs.”

“It felt like falling in love,” Susan says, “we were so enamoured with them and everything they did. But we went from being excited to exhausted in minutes.”

“We’ve done all the child care because we wanted to create a tight-knit family,” Susan says. “It hit me, there was no such thing as a weekend. Meeting their physical and emotional needs and the exhaustion – it is easy to get stuck in a small world. We were very lucky to have such strong support networks.”

“One thing we went through,” Frances explains, “is that people frequently don’t recognise us as a family. People aren’t hostile but they don’t always understand”.

Susan particularly recalls an exemplary moment in a supermarket: “Our daughters wanted chocolate crispies and when I said no, they screamed for their mum and people intervened! They didn’t believe they could have two mums.”

“Something we’ve realised now,” Frances says, “is people can be very intrusive because we’re lesbian mothers. We’re proud and open – but people do push the boundaries with impolite questions. Overall, from beginning the process to now, being lesbians hasn’t hampered a thing.”

“It felt like we’d run at an open door,” Susan nods. 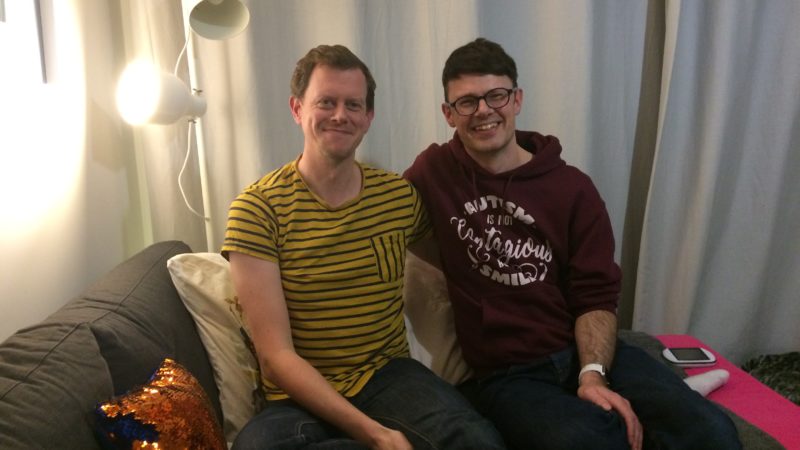 Adoption was on the cards for Ian and Simon from the start.

“We discussed children on our first date, six years ago,” Simon admits. But when it came to the process of adoption, the decision took longer.

The couple had shown interest in another child but the foster carers had decided they wanted to adopt them officially. Then they came across their son’s profile. “We had looked through a website which contains the details of children who are harder to place, children with multiple siblings or with additional needs,” Simon says.

“We had by that point found two children that we were interested in,” Ian adds, “and we had to – and it sounds terribly analytic – sit down and cross-reference the profiles and compare details. We had to make a decision that was going to fit with our family and be best for the children but it was tough to ‘appraise’ two little boys.”

“It requires a great deal of maturity and detachment to look at two wonderful children and have to consider those things. Both had additional needs and we had to remember their needs were likely to become more noticeable as they became settled.”

No sooner had the social workers met Ian and Simon, then they were cleared to begin the process. “We were told we were a perfect match,” Simon says. Both had first-hand experience of caring for children with additional needs.

The pair had to consider a list of requirements and, for the most part, ticked ‘willing to accept’.

“We were aware that many children would come with extra needs. But becoming a parent would be about learning – we always said if we were drawn to a child, we would learn whatever we needed to be their parents,” Simon concludes.

All things considered, Ian and Simon admit they weren’t sure what to expect. “We quickly learned the things that being a parent involves but had not been aware of – things like wiping your child’s nose with your hand when you’ve run out of tissues,” Simon says with a grimace.

Simon and Ian found the process difficult and, at times, frustrating. “Retrospectively, I can see it was significant,” Simon says. The pair met their social worker weekly for three hours – even their student loans were looked at. “The process of introduction to our son was – for us – too brief at just two weeks. But we trusted it was right,” Ian says.

“We weren’t sure how people would respond to us as a family. That was more to do with the era we’d grown up in,” Ian admits.

*These figures do not include the sexual orientation or gender identity of single adopters, bisexual people not in a same-sex relationship, or trans people – unless they are part of a same-sex couple