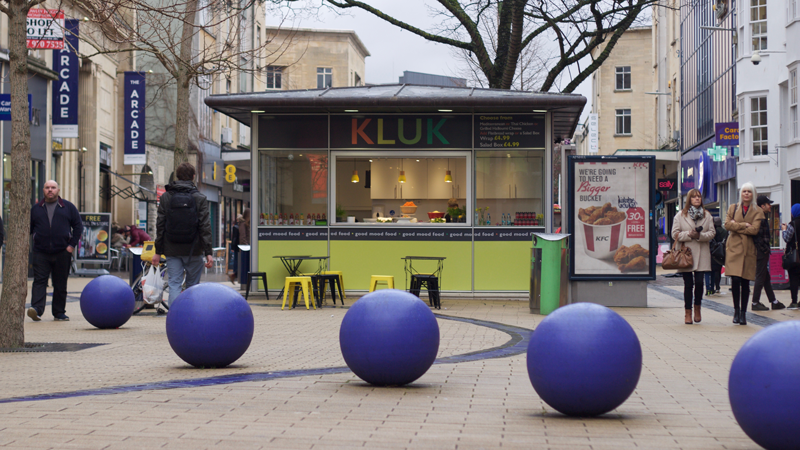 Next time you stroll through Broadmead, make sure you stop and sample some of the healthy offerings of one of Bristol’s newest eateries, Kluk.

Based out of one of the cabins in the busy thoroughfare between Cabot Circus and Union Street, much of the colourful salad on offer is made fresh on-site.

Austin Fitzpatrick is the man behind the venture. “We want this to be healthy food made fresh each day,” he explains, gesturing to the vibrant heaps of shredded carrot, crisp spinach and fluffy couscous proudly displayed on the counter.

It’s been a busy lunchtime, and several of the dishes have been picked over by hungry shoppers, including an intriguing green salad, studded with tomatoes.

“That’s a tabbouleh salad, without the wheat,” Austin says. “It’s inspired by a restaurant I used to have in Beirut, and the food and culture of Lebanon.”

With an extensive vegan menu, Kluk is tapping into a food trend that is growing ever more popular.

For carnivores, they offer three different chicken options that are marinaded overnight for flavour that pops: a Mediterranean-inspired recipe with lemon and garlic, a Thai marinade with coconut and ginger, and Jerk chicken that blends spices with delicate sweetness.

“We’re making things that people wouldn’t bother to do at home,” Austin says. “We want to give them something with more flavour, and we’re seeing people coming back two and three times a week on their lunch break, which is fab at this early stage.”

For the month of January, any meal will come with a free bottle of water, as Austin often sees people not drinking enough.

“They choose a coffee or a fizzy drink, rather than drinking water, and that goes against our idea about eating healthily,” he says.

So, while this month might be grey and uninspiring, your lunch doesn’t have to be.