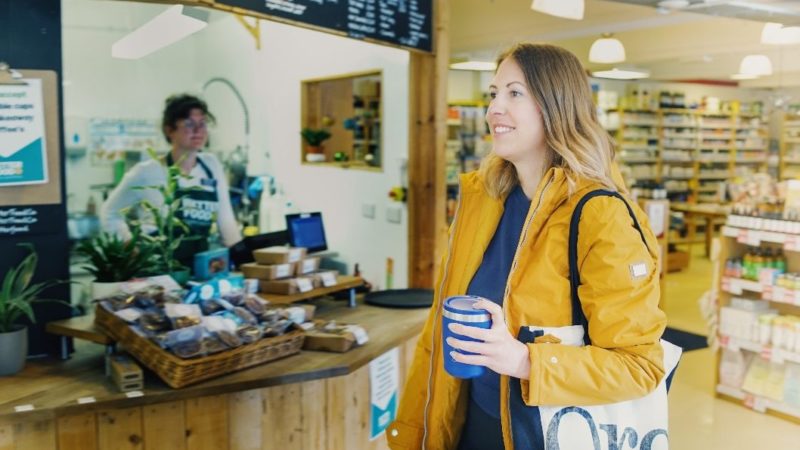 Concerned the plastics industry is feeding on people’s fear to push its own agenda, City to Sea has launched a campaign to keep reusables on the menu.

The environmental organisation has partnered with retailer and cafe Better Food to pilot #ContactlessCoffee, in a bid to highlight the best practice and give outlets guidance on how they can accept reusable cups as they look to reopen after lockdown.

The plan is to provide support and advice as weeks go on, as well as establish a national action group on reusables.

“Bristol is a trailblazer in the green movement, so it is the perfect city to launch our pilot,” says Rebecca Burgess, CEO of City to Sea.

“As coronavirus hit the UK, it became clear that there has been a surge in single-use plastics and, as we come out the other side, we are keen to not only support coffee chains, local independents and restaurants but also not let the great strides towards reusables slip.

“I am saddened to see the plastics industry feeding on people’s fear to push its own agenda. Despite what the plastic industry wants us to believe, single-use plastic is no safer.”

Rebecca continued: “Safety is quite rightly the number one priority for all of us right now and, if you’re starting to think about reopening, we totally understand why you may be considering offering single-use coffee cups only.

“However, no one material is guaranteed to stop the virus. That’s why the World Health Organisation and other health authorities continue to emphasise that washing our hands and sanitising surfaces are still the best things we can be doing.

“So, whether it’s single-use or reusable, coronavirus doesn’t care – but our planet does.”

2.5 billion coffee cups are used and thrown away each year in the UK – enough to stretch around the world roughly five and a half times, irreversibly damaging our environment and polluting our oceans, says City to Sea.

Government guidance currently states “it is up to the individual business to decide whether they allow the use of reusable cups or containers during this period”.

City To Sea says reusables can be used safely and has developed guidance, which is being tested through the joint pilot.

Gene Joyner, managing director of Better Food, said: “As we prepared to reopen our coffee counter, we asked our customers what they wanted us to do about reusables. An overwhelming 80 per cent said they wanted to be able to use them.

“After some initial concerns about making sure staff and customers were safe and that we could serve a great coffee we have been reassured. The guidance will mean one less headache for hospitality businesses as they move to reopen.”

City to Sea is happy to hear from any Bristol-based business offering takeaway coffee that would like to be part of the pilot.

The organisation plans to work closely with Better Food and others over the coming weeks, to help get businesses back up on their feet in the safest, most responsible way and in alignment with Government guidance.