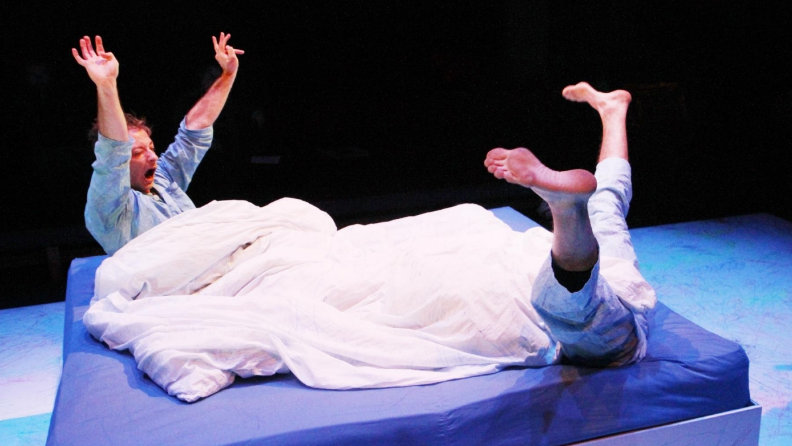 “I love it!” one young voice shouted out from the stalls during Friday evening’s performance of Boing! at the Bristol Old Vic’s Weston Studio.

There was also so much laughter, giggles and squeals emanating from the predominantly pre-school audience that my five-year-daughter could not have been the only one judging this wonderfully whimsical production to be worthy of 100 out of ten.

This co-production from Barton Hill’s Travelling Light Theatre Company and Bristol Old Vic, directed by Sally Cookson, is one year away from celebrating its tenth birthday as a touring production, and Christmas has come early for Bristol audiences welcoming it back to the city this year.

Its premise is simple: on a simple stage on which is just one double bed, two brothers try but spectacularly fail to go to sleep on Christmas Eve after hanging up their stockings.

Accompanied by a gloriously melodic soundtrack from Three Cane Whale’s Alex Vann – which at one stage takes an unexpected detour into Kraftwerk-esque electronica – actors Wilkie Branson and Kel Matsena perform energetically to bring out the excitement of waiting for Father Christmas.

A pillow fight is choreographed with the finesse of a Bruce Lee movie, teddy bears become evil overlords and it wouldn’t be a Bristol Old Vic production without some puppetry, one of the most memorable elements of Boing! being when the entire bed is turned into a boat, hopefully sailing for the land of nod.

Don’t just step into Christmas this year; bounce into it.

Boing! is in the Weston Studio at the Bristol Old Vic until January 5 2020. For tickets and more information, visit www.bristololdvic.org.uk/whats-on/boing