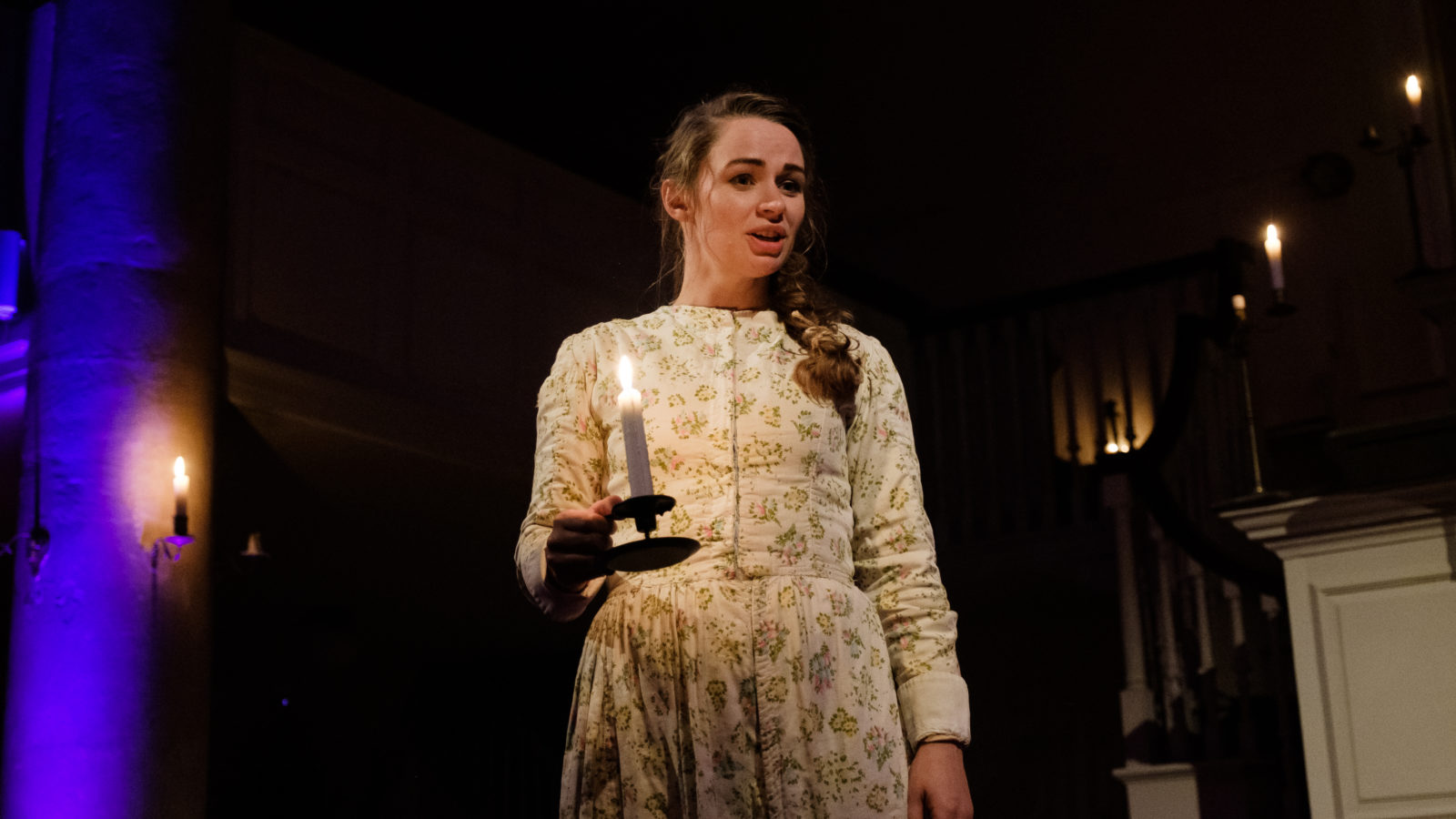 Locked in a tower. Forced to spin a roomful of straw into gold. By morning. Or have her head removed from her body… Milly’s only hope of salvation lies in the strange creature speaking riddles and lurking in the shadows of her cell: but what price will it demand in return, and will it be more than she can pay?

This autumn Bristol’s site-specific maestros Insane Root present a spine-tingling take on Rumpelstiltskin, the ancient folk tale of greed, imagination and the terrible choices we have to make. Told by candlelight, the immersive performance is inspired by, and staged in, John Wesley’s atmospheric chapel, The New Room, in the heart of Broadmead.

It features a brand new script by award winning writer Matt Grinter (Orca) and an original score by Ellie Showering. 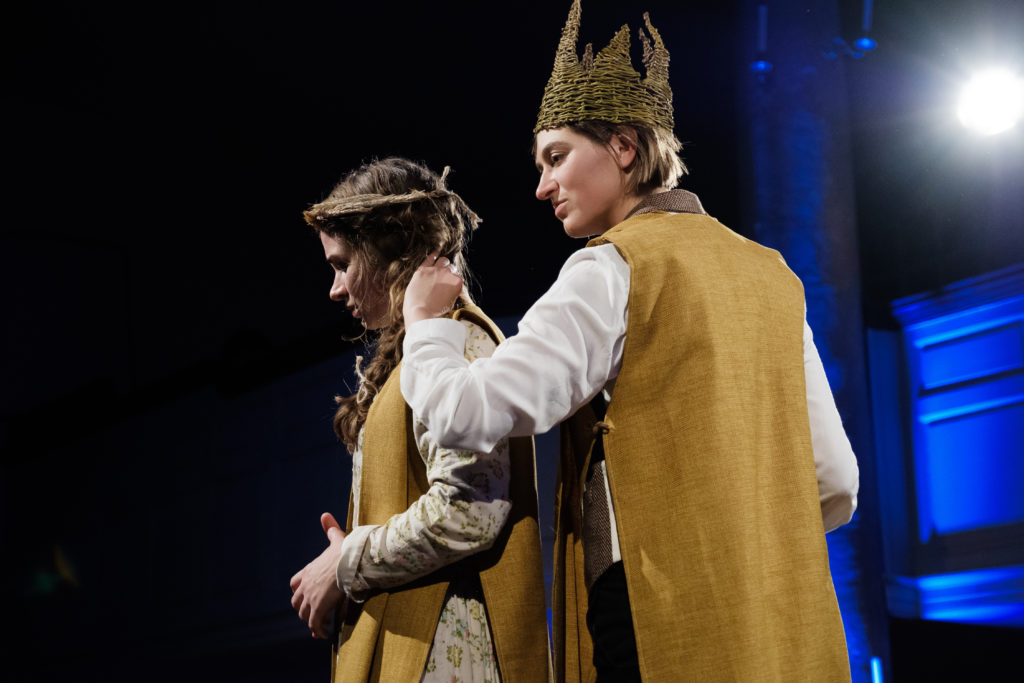 Insane Root perform their adaptation of ‘Rumpelstiltskin’ at The New Room, aka John Wesley’s Chapel, this autumn. All pics: Jack Offord

We chatted to Matt and Hannah Drake, the show’s director and Insane Root’s co-founder, about their take on this memorable tale – and on bringing it to life in one of Bristol’s most unique and atmospheric venues.

Tell us how you have adapted the original Rumpelstiltskin folk tale. What changes and additions have you made to it and why? How recognisable is your version against the original?
Hannah: Rumpelstiltskin is one of those folk tales that most people think they know well, with its iconic ‘spinning straw into gold’, little imp-like titular character, and guessing of his name, but when I re-read it I was struck by how much I had forgotten, and how stark and brutal it is in its Brothers Grimm rendition.

At its heart it is a story about control, the terrible things we are sometimes forced to do, and the power of names. Our version springs from this but brings in more humour, inspired by the English version of the tale, ‘Tom Tit Tot’, which casts the Rumpelstiltskin character into more of an animal/other creature, and gives the miller’s daughter more wit and ingenuity. It also explores the world/regime within which the events take place, in a little more detail. 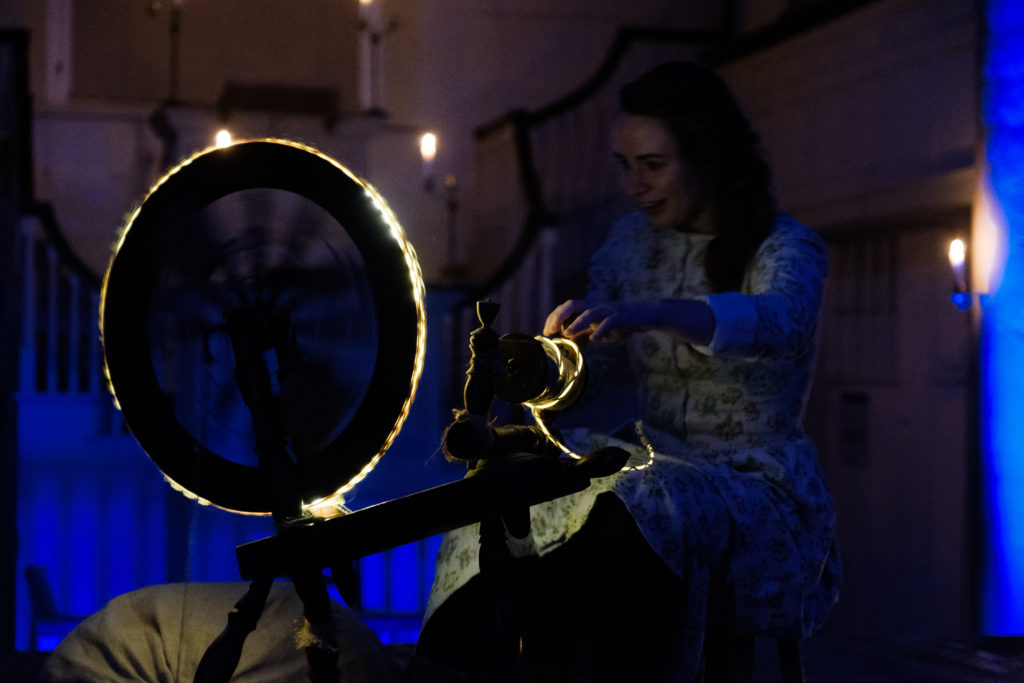 We felt it was important to flesh out the very stereotypical gender behaviours in the original story, and Matt has pulled out big themes of imagination, finding one’s own agency, and unlikely friendships. Our production is also much funnier than the original tale…!

Matt: There are a number of versions of Rumpelstiltskin in various cultures across the world. The one we are familiar with is the one that the Brothers Grimm immortalised with the imp-like creature who stamps his foot until he explodes. However, although most people remember some of the more iconic moments within the story, such as the guessing of a name and the spinning of straw to gold, we found that the rest of the story is a little more hazy.

The protagonist ranges from a meek miller’s daughter to a lazy village girl, and in almost all of them the message of the story seemed at least outdated – and at worst oppressive. Our version has stayed true to the framework of the original tale, and taken all of the iconic elements that people remember: but we have tried to give the characters an emotional journey that we can relate to in a modern setting. The characters have a lot more agency and the decisions they make are, we hope, motivated by something we can understand. 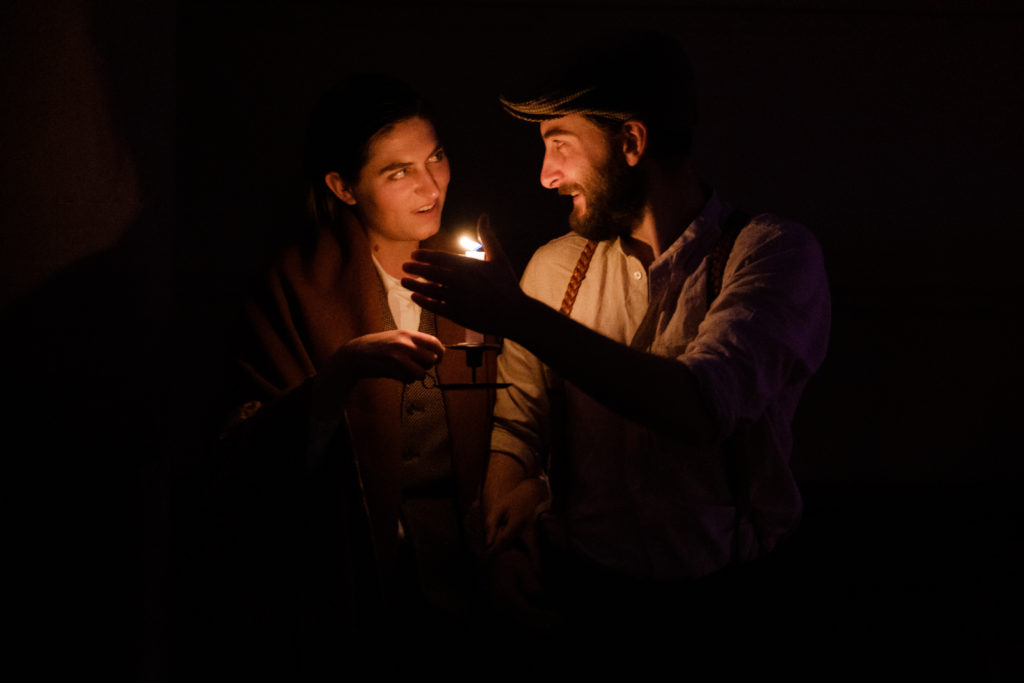 One of the biggest things we’ve developed is the idea of the fairy world and the human world and the magic that sits within both. There is also a lot more humour than in the original tale: I think the best way to connect to any character on stage is to have them make you laugh. I would hope our version would feel like a more nuanced and developed version of the original story that can speak to a modern audience.

The play is also inspired by its setting, The New Room. Can you explain further?
Hannah: When you walk into the New Room in daylight, it is a warm haven in the middle of a bustling shopping centre, but by night (and candlelight) it has an incredibly eerie quality, full of shadows and dark corners. It feels like you step out of time when you walk in, with its wooden floors, pews and grand, almost operatic stone pillars. It’s the perfect setting for a ghost story.

When it comes to staging, it is both a blessing and a challenge, so we’ve actually built our own stage in the centre of the space to improve this as well as exploiting the different levels and walkways to bring the action into and amongst the audience. Historically, the New Room was as much a community space as a religious sanctuary, which inspired us to bring a more storytelling style of theatre to it – a shared experience, rather than a voyeuristic one. 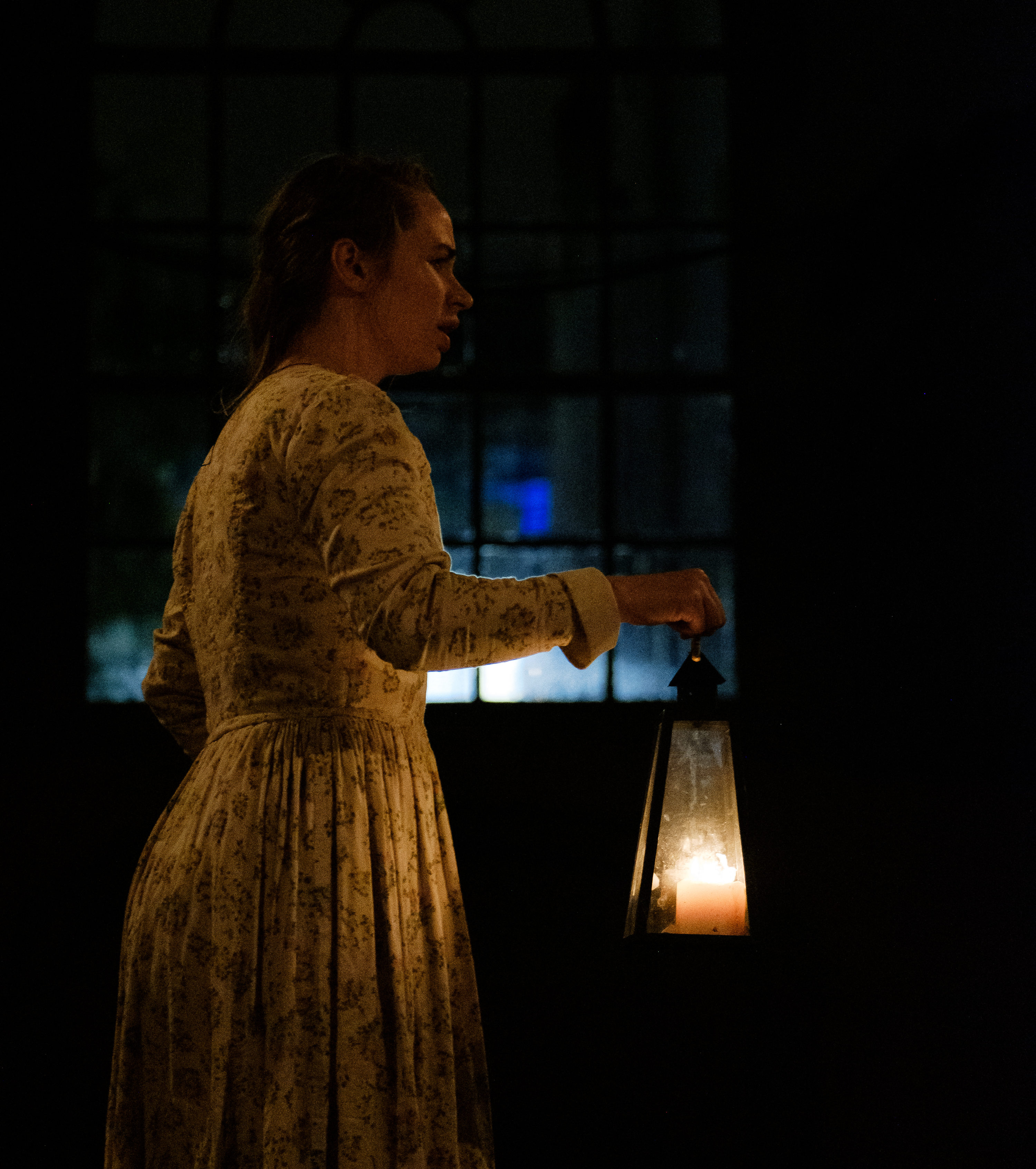 Matt: The New Room is written into the text. It was the first place we met as a creative team and was constantly on my mind whilst writing the play. The geography of the room very much influenced how the scenes played out, such as the different levels of height which manifested itself in the powerplay within the script.

It is particularly present in the character of Rumpelstiltskin, with the dark shadowy corners and the wooden railings and pulpit which swell and shrink in the candlelight really influencing how we decided to bring his character to life. There is also a real warmth to the building, which we wanted to resonate throughout the play.

Would you call this show more ‘storytelling’, less ‘theatre’ than your productions to date? And how does that change your approach?
Hannah: The frame of the show is created by three actors arriving to tell the audience a story before stepping into various roles to bring it to life. When I was a kid I was a big fan of Jim Henson’s TV series The Storyteller, so that’s been a big inspiration for me in directing the show. It’s that combination of explicit storytelling and pure theatre – we include devices like puppetry and underscoring to add to that quality. The direct address of storytelling offers, we hope, a sense of immediacy and connection that is vital for these old tales: to take them out of the storybook and make them fresh and relevant for now. 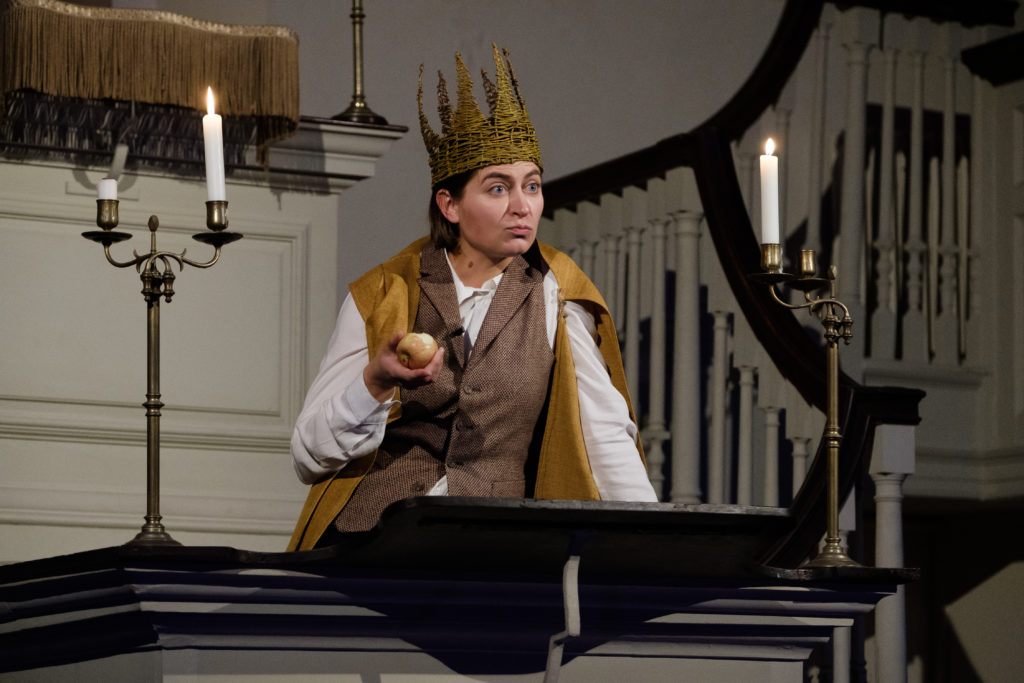 Matt: How much is storytelling theatrical, and how can we blur the lines between them? As the writer, this has been a wonderful concept to play with. As has the idea of stories and how they influence us in the real world. This is absolutely a piece of theatre, but it is also steeped in storytelling traditions and, much as Brecht did, it constantly reminds you that it is just a story. The fun part is how this affects an audience, and how much more they will immerse themselves in a story and, we hope, engage with its characters. I think the combining of these two forms makes for a piece of theatre that feels fresh and alive.

Rumpelstiltskin is at The New Room, John Wesley’s Chapel, Broadmead from Oct 4-Nov 1. For more info and to buy tickets, visit www.insaneroot.co.uk