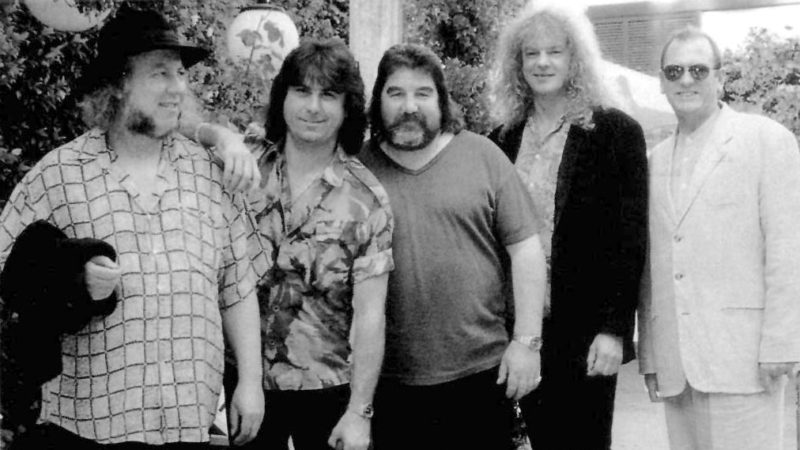 Back in the mid-90s, there was a very short list of rock’s greatest acid casualties, who we never expected to see performing live again. Out of the blue, it was halved in size. Syd Barrett remained a recluse for the rest of his life, but Fleetwood Mac co-founder Peter Green made an unexpected return to the stage.

“‘Ello Bristol! ‘Ow’s yer Bristols?” That wasn’t the blues guitar legend, whom some contended was Hendrix’s only serious rival and a far better musician than Eric Clapton. It was a chap named Nigel Watson, Green’s best mate: a former builder who had achieved the seemingly impossible by coaxing the fragile guitarist back to the stage as part of his Splinter Group. This early incarnation was completed by the ace former Whitesnake rhythm section of Cozy Powell (drums) and Neil Murray (bass), plus journeyman keyboard player Spike Edney, who’s probably best known for his work with Queen.

The date was November 27, 1996, and the Bristol Bierkeller was packed to the rafters for a gig that had barely been advertised. Given his reputation, Peter Green could have easily sold out the Colston Hall. But there was a determination behind the scenes to keep things low-key so as not to spook the man we were all here to see. Nonetheless, the cosmopolitan audience included more than a few rubberneckers who’d clearly been drawn by the BBC’s recent The Works documentary, which gave the unfortunate impression of a befuddled old geezer being pushed prematurely back into the spotlight.

And there he was, 26 years on from his previous west country appearance (Bath Festival, May 24, 1970, fact fans): a portly, balding, middle-aged gent, looking slightly dazed. Was this going to be a disaster? Mercifully not. As he settled into the set, Green appeared to be having the time of his life, offering a convincing justification for his inflated reputation with that trademark sparse-yet-resonant guitar style, where not a single excess note is allowed to widdle free into the ether. The presence of Powell and Murray might have irked the Blues Purist Bore contingent, but they supplied just the right amount of muscle to fend off the spectre of them old Eric Clapton Corporate Hospitality Blues.

Black Magic Woman cropped up early in the set, in extended jam format echoing one of Carlos Santana’s more imaginative arrangements, while the aptly named Albatross was dispatched more concisely. Thereafter, it was a mix of standards – a dash of Robert Johnson, a soupcon of Percy Sledge, and absolutely stonking Going Down – and some reasonably promising new numbers.

Alas, Green’s soulful voice had fared less well than his guitar playing skills, sounding thin and weedy except when he reached for a more comfortable lower register. Fellow guitarist Watson, who played like a man who cannot quite believe his luck (as well he might), came to the rescue with more suitable gravelly vocals. But there was a terrible price to be paid when one of his own awful, jaunty compositions was aired. Yes, we wanted Peter Green back. But no, we didn’t want him playing pub rock. “That was one of Nigel’s,” announced Edney afterwards, as if apportioning blame.