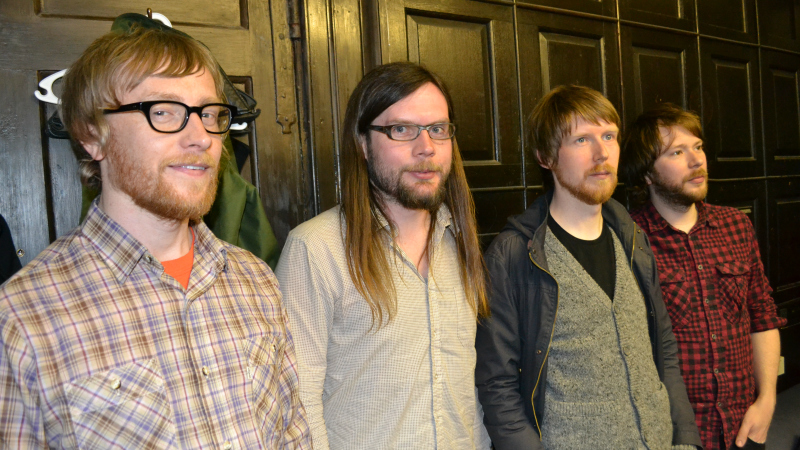 We were actually lucky to have a (rather great) support set from The Hanging Stars as upon arrival at the venue they were asked by some of the denizens of The Long Bar what music they played. Answering in a cheeky scamp manner “Doo-wop” the denizens misheard and thought they’d been told to “Do One” and fisticuffs were narrowly avoided.

Their first two numbers passed by pleasantly but without making a big impression, however as the room filled and keys man Patrick Ralla swapped to lead guitar, the band moved it up a gear.  I’m No Good Without You was introduced as being about life surrounded by “tory dickheads” and was delivered with considerably more heft than the opening numbers. From then on the band just kept improving, leaving a distinct impression that this was a band that deserves a decent set length to really find its mojo.

Golden Vanity opened with some classic harmonies over a quiet intro before morphing in to a rocker; Crippled Shining Blues alternated passages of shimmering lead guitar surfing a pedal steel swell with Crazy Horse heft whilst Running Waters Ride featured a gorgeous descending keyboard motif like ice marbles falling down crystal stairs. The band refer to themselves as a “Cosmic Country Folk band” and there were certainly elements of that in their set, but they rock hard and also stir memories of the Paisley Underground bands of the mid-Eighties, particularly during closing number The House on the Hill, which had a real Long Ryders vibe. These guys take the standard country rock format and really stretch it out in to some great shapes – there’s more than a hint of psychedelia at play and the tunes are memorable too, free from cliché and hopefully they will return soon, with a set length that makes the Dead look like the Ramones.

Wolf People’s singer Jack Sharp was reminiscing four tunes in, remembering the first time the band came to town and played The Cube “We were fucking shit, we only played six tunes and the promotor was furious” but their set tonight was far from fucking shit, it was fucking superlative. Their previous set at the Louie late last year was triumphant but a tight set, the tunes compressed and concise with little jamming (Joe Hollick, guitar, confessed after the show that the band had been nervous at the sold out Louie so the band tore through the set powered by edgy energy). Tonight’s set saw the tunes stretched, jammed out and extended into pounding pummelling twisted edifices of folk / prog / proto metal all borne on a wicked relentless funky groove.

Said funky groove came courtesy of Dan Davies (bass) and Tom Watt (drums), a tight partnership with Davies threading forceful melodic bass though the guitars and locked into Watt’s ruthless beats. Watts is arguably the heart of the band locking in the grooves and anchoring the extemporisation, bringing it back to earth when the songs took flight with improvisations and inventions. The bloke played like a machine and if wired up to the drum kit equivalent of a treadmill would have surely supplied enough energy to power the PA.

The band were clearly more relaxed this time round, smiling faces all round, Sharp harvesting laughs with his inability to remember song titles and amusing introductions, “This song is about how everything’s shit and the world’s full of dickheads” presaging a searing Not Me Sir. All three albums were covered with tunes returning to the set after a layoff as well as crowd pleasing favourites. Banks of Sweet Dundee was introduced as an eight minute folk song, and sure, the tune opened folk style but then blew up into a riff monster. Pete Seeger allegedly wanted to cut Dylan’s power cables when he had the audacity to play electric folk at Newport, if he’d have heard this motherfolker of a tune he’d have wanted to napalm the venue. This song epitomised the set, a soaring version that pushed the band to the limits as they performed a breath taking version of the tune. Such was the impact of the rendition that at its end there was an audible silence, probably only seconds but feeling like minutes, before a thunderous crowd reaction.

Hollick played like a man possessed throughout the night, wringing his instrument dry of sound, at times it seemed like the riffs and solos possessed him and I swear at one stage he actually levitated such was the intensity of his playing. The sounds he invoked in the breaks were beyond unearthly: during Hesperus he conjured up a haunting sonar sound, the type of echo you’d get if your beam hit a Kraken and One by One from Dorney Reach’s awesome fucked up fuzz riff was strafed with Illuminati helicopter blades.

Hollick’s work throughout was complimented by Sharp’s playing as both are gifted and generous players – swapping leads, trading riffs and intertwining leads that went from nefarious to joyous, the antithesis of clichéd showboating prevalent in technically adept but creatively bankrupt metal bands. Although the pair created some truly innovative sounds they’re firmly grounded (but not in thrall to) their influences, in fact the first encore Kingfisher had elegiac duelling & harmonising leads reminiscent of none other than the Allman Brothers. Who knows if that was deliberate or six string spirits at work but it was the kind of night when the guitars soared. Silbury Sands & NRR closed the set leaving the band drained & grinning and the crowd roaring their appreciation.

Wolf People are innovative in the studio and a truly exciting proposition live; they’ve created a unique sound via a catalogue of songs that refuse to pander to cliché and the norm and which push the boundaries of what constitutes a 21st century rock band. Their blending of genres is proof that gifted musicians can take a disparate set of genre tropes and summon up an enthralling set that challenges and entertains in equal measure.