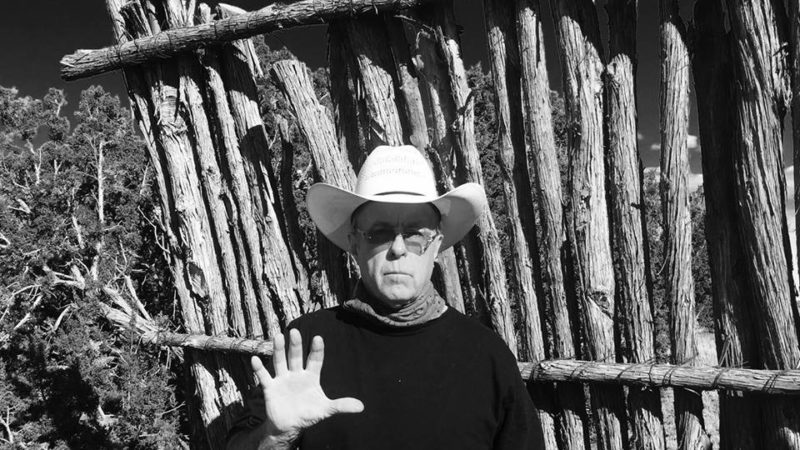 It is an early start tonight for Tom Russell on the famous Bristol boat: first set starts at 7.30pm. No support band of any kind, just Tom, his guitar and his massive cowboy hat on a one-on-one with the rather small crowd – which is quite surprising knowing that he is a luminary in the folk-country song-writing world. Of course, it’s not something to complain about as a member of the audience… Indeed, the gig turns into a somewhat intimate affair, which gives room for stories, interactions with the crowd and jokes – Russell turns out to be a king joker on stage, turning the room into a non-stop laughing pit.

What hasn’t Tom Russell done yet? He is a versatile artist who has released 35 albums and published several books and who is also a painter. His songs have been covered by big names in the field such as Johnny Cash, Dave Alvin or K.D. Lang – just to name a few. Yes, Tom Russell means business and it can be seen that he his an old hand through his easiness on stage. He has just recently released a new album called “October in the Railroad Earth” (a title borrowed from one of Jack Kerouac’s poems).

The native of Los Angeles takes the audience on a journey through his life, career, travels and stories in songs – Russell is an extraordinary storyteller. He has the skills to wrap the audience in a time bubble and hypnotise them with his sharp words and warm voice. His acoustic guitar sounds clear and round, matching perfectly with the his vocals. He performs The Light Beyond the Coyote Fence, a song about the protecting fence around his Texas home to keep the coyotes away. Russell’s barking imitation provokes some grims in the audience before everyone is invited to join him.

Tonight We Ride and October in the Railroad Earth are striking examples of the great combination between his guitar chops and his warm deep voice. He talks a lot about his inspirations such as Bob Dylan and Johnny Cash. He even performs a little medley of the latter’s songs for the pleasure of the audience. Who’s Going to Build your Wall? is more relevant than ever, even if the song was written more than ten years ago. After performing a generous amount of songs, Russell comes back for an encore and performs Navajo Rug, a particularly catchy song where the audience join in for a last singalong. Thekla witnesses a pretty magical evening… once again.