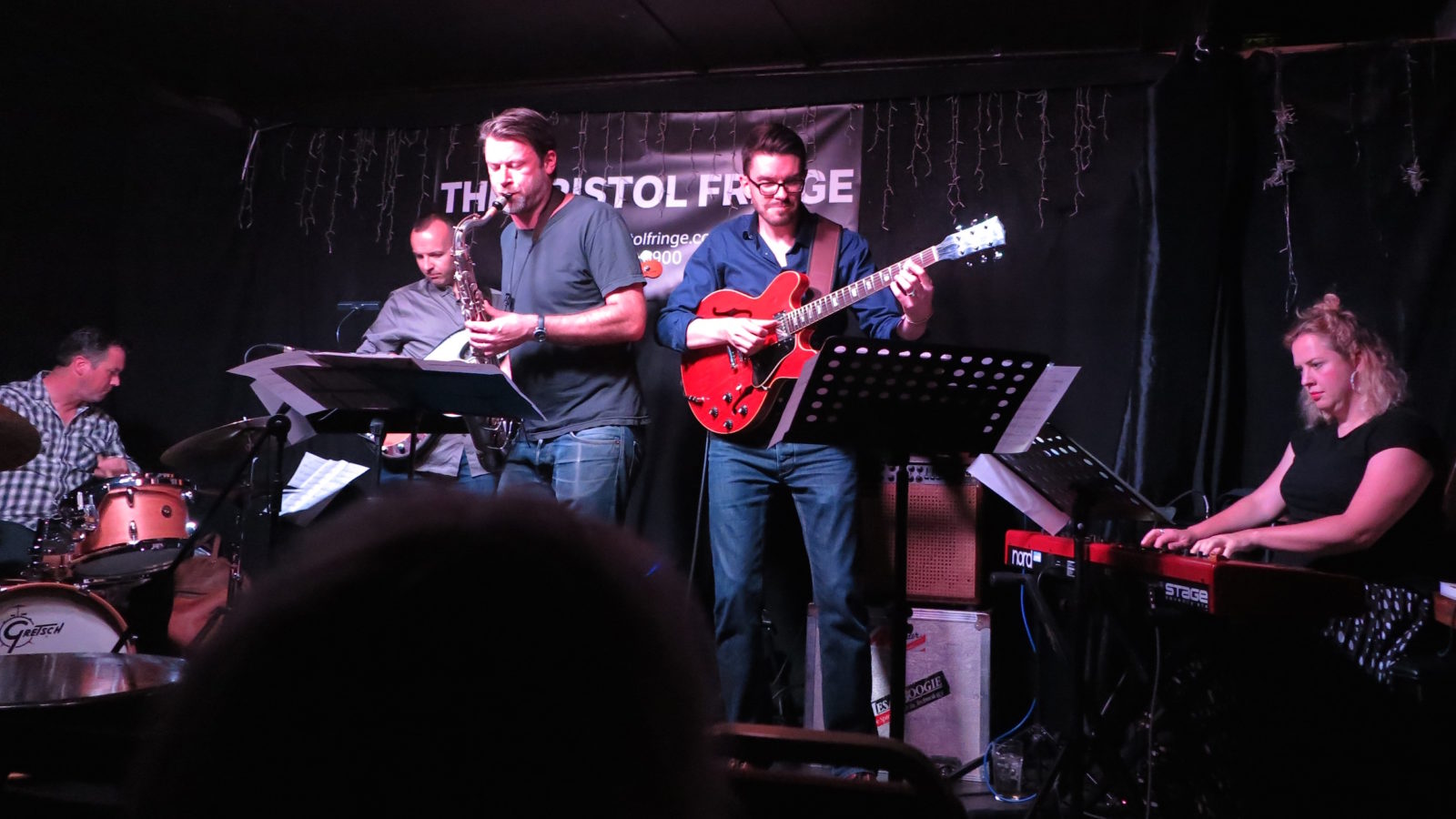 Not all electric guitarists are attention seeking show-offs, and not all band leaders want to hog the limelight. Throughout this gig the amiably self-effacing Steve Banks was fulsome in his praise for his band members, with many of his original numbers specifically composed with their playing styles in mind. Yet, in the consistency of the group’s tone and the music’s compositional style the guitarist’s personality was very much to the fore. 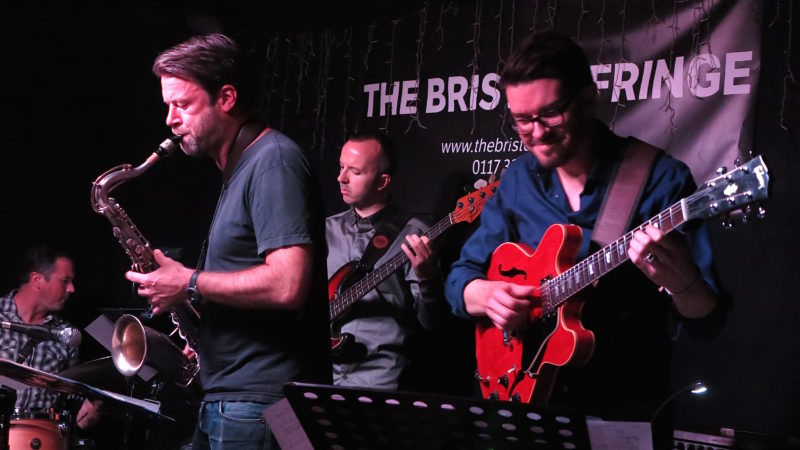 This was the launch of a new project, with a completely new set of tunes, and it proved to be a very even-tempered affair. Steve’s melodies were accessible showcases for the band’s collective and individual talents across a range of moods, from the bossa-influenced Mancunian Candidate and Shower to reflective ballads like Made Your Piece and the jaunty In My World. 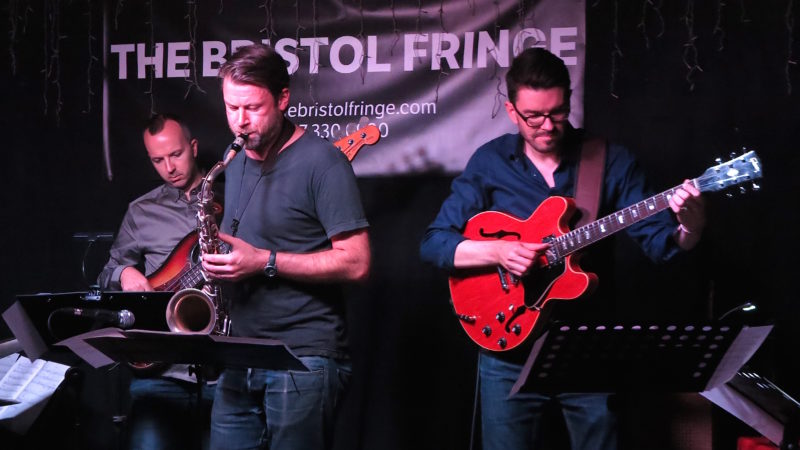 Much of the melodic weight fell on tenor saxophonist Nick Dover’s shoulders, but he bore that with ease. His mellifluous approach and suave improvisation had a resolutely old-school discipline that characterised the songs he led on – his playing on Made Your Piece echoed by Steve’s sax-like cadences on guitar. There was a similar interplay between Steve and George Jackson’s bass on Dancing With Small Feet, a chirpy number enlivened by Rebecca Nash’s free-ranging piano underpinned by Mark Whittlam’s rolling drums. 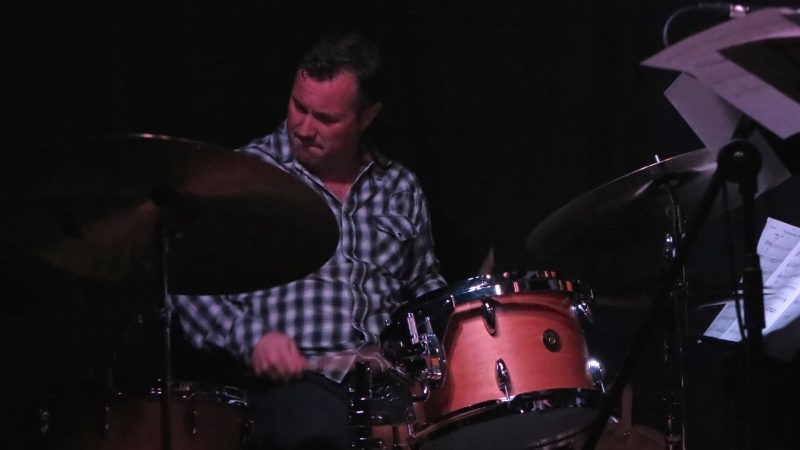 Mark even got an eponymous tune – Whittlam Sticks – with his quickly-responsive drumming providing an instant commentary to great solos from Rebecca (fluid and abstract) and George (crisply analytical). The drums steered the piece to a sax-led tutti blowout, one of the few flamboyant moments in this well-mannered set, and a great end to the first half. 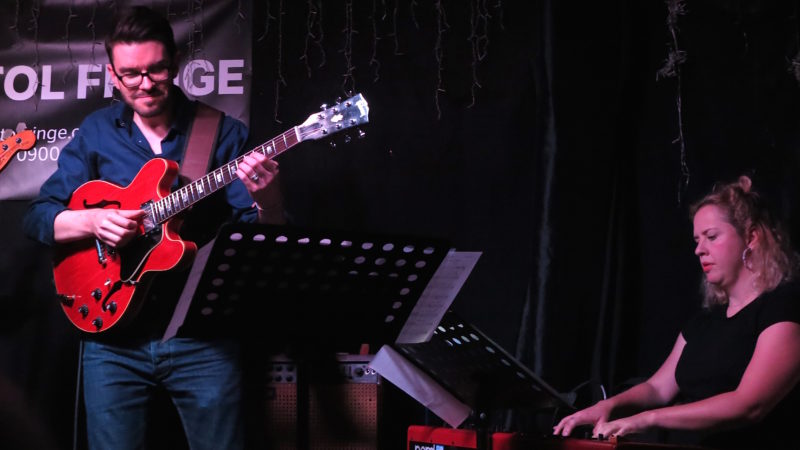 It was only towards the end of the evening that we got to hear Steve’s distinctive solo playing to the full, firstly on the Kenny Wheeler inspired Two Brothers. Like all the compositions this was a statuesque piece, a well-shaped tune put through its paces with no gimmicky structures or off-kilter time signatures. By now the coherence of the sound had gelled nicely into a collective flavour that blended all five players’ contributions. The finale, however, showcased Steve’s guitar with a delicate solo introduction that referenced the Americana influences of the great Bill Frisell before being picked up by Rebecca’s spacious keyboards in the Bill Evans style. Once Nick’s sax took on the plaintive waltz tune (called Always For You and Forever Yours) it was clearly a song without words that provided a stand out closing moment that reverberated as we left the Fringe’s back room.