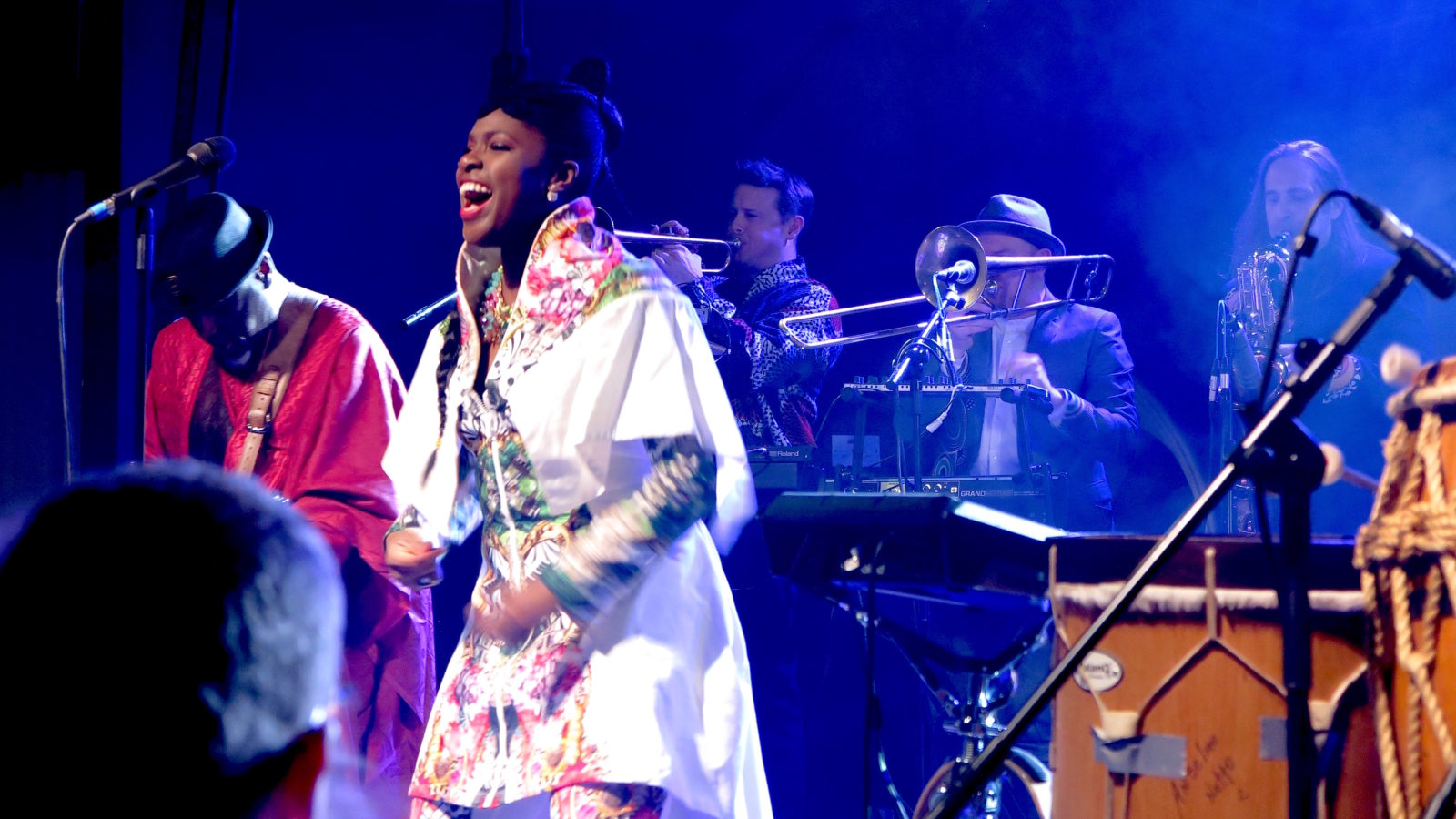 If, instead of pitching up in late 60s Los Angeles, Nigerian legend Fela Kuti had instead arrived in early 80s New York it’s possible he also might have come up with the Ibibio Sound Machine. What he actually created, of course, was Afrobeat – a fusion of US funk with African highlife which remains both inspirational and popular to this day.

With both both tonight’s London-based acts sharing a Nigerian heritage it was to be expected that the late great Fela’s shadow would be hovering over the evening but in fact it was less evident than might have been expected.

Singer/songwriter Aadae had left her band at home and took the stage with just a laptop, a drummer with a Roland box of tricks and a microphone. The stripped-down set-up left her original music and voice more exposed but she handled the challenge with unruffled aplomb.

Songs like Just Found Out and Carousel Horses kept their high-production pop-soul sheen with complex Afro-trip arrangements and plenty of BV action, and the latter brought out an assertive strength in a voice that had otherwise tended to the sweetly soulful. 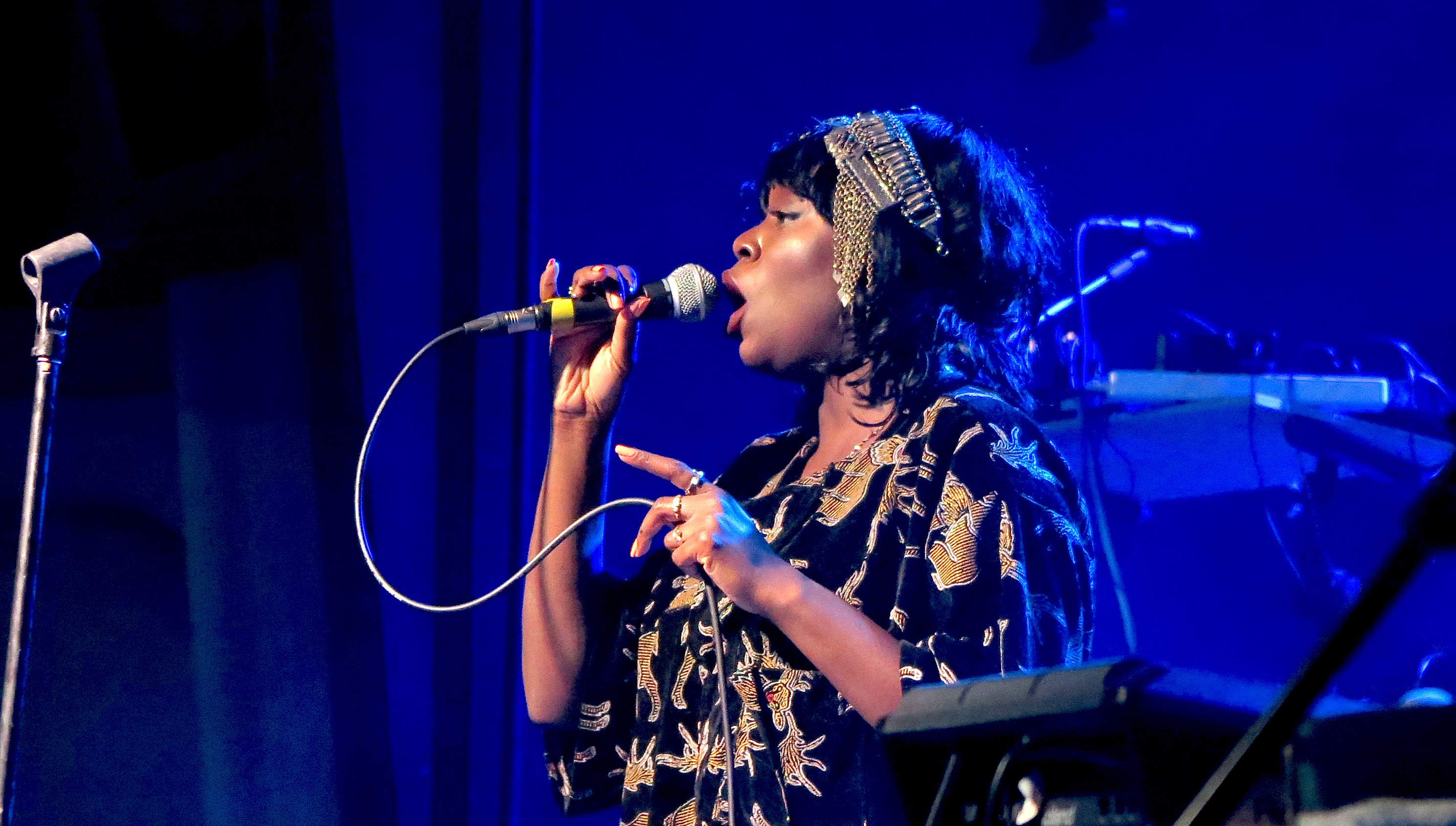 Aadae is a performer confidently finding her own way forward

The classic soul trope of Just Found Out (the singer has discovered indirectly that her partner has moved on to someone new) proved an interesting contrast with her one cover version, Etta James’ similarly themed I’d Rather Go Blind. It was a brave number to go for that also drew more from her vocal range despite an overcomplicated backing track. Overall, Aadae seemed to be a performer confidently finding her own way forward.

There’s no doubting the way forward for Eno Williams, front woman of Ibibio Sound Machine, and that’s continuing to be up.

Strikingly costumed between guitarist Kari Bannerman and percussionist Anselmo Neto the trio formed the heart of the band’s 10-piece lineup and she herself commanded the night with imperious glee. In just five years the band have notched up two albums and a big fanbase thanks to the failsafe dance frenzy of their live gigs.

This tour anticipates the release of a third recording Doko Mien (Tell Me) so the bulk of the set featured tracks from the album, but first came the crowd-pleasing Talking Fish (Asem Usem Iyak), with its insistent bass hook, gurgling 808 style synth sequences and loads of (very willing) audience participation. 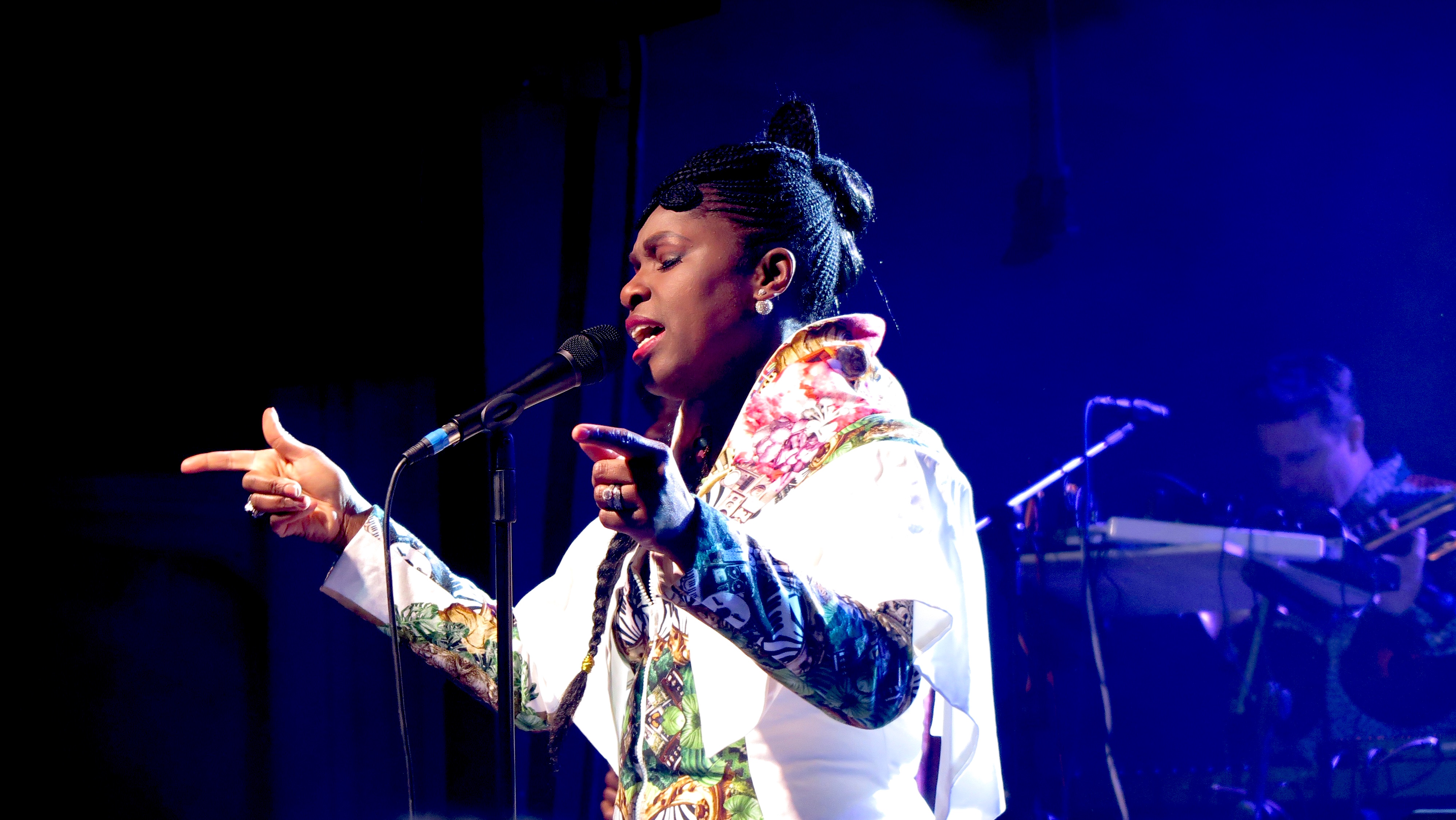 Where that old favourite had a clear African heritage much of the new material had a more Western-retro feel: the album’s title track for instance had the synth-pop snap of something Yazoo might have knocked up circa 1982, and Wanna Come Down’s slapping disco beat and electro chords was the kind of thing the Sugarhill crew would have plundered for samples the year before that.

As a contrast to those numbers’ hard beats the slow-burning I Know What You’re Thinking About Me was a crisply fulsome R’n’B number, Eno’s simmering vocal perfectly controlled over the sparse arrangement, complete with Max Grunhard’s soulful saxophone payout.

But when Anselmo returned to his prominent percussion set-up things swiftly moved back in a Lagosward direction. The jump-up factor really kicked in at this point and a sequence of more complex beats,  counterpoint rhythms and show-off talking drum work all contributed to a stomping final section.

The ‘big ol’ funk thang’ feel of Power of Three, awash with shameless amounts of perfect wah-wah guitar, and the blatantly stated intentions of 1-2-3-4, Let’s Dance absolutely did the job of wringing the last drops from a happy sell-out audience.

Whether Afro-funk, electro-pop or soulful R’n’B, however, the important thing was that the Ibibio Sound Machine was just that – a well-made, well-oiled and highly tuned machine.

In their collective hands it produced precision goods, locked tight by the kind of you-can’t-see-the-join craftsmanship that makes all the difference to live dance music.

With their musical tightness and Eno Williams’ charismatic presence (and powerful pipes) it would seems they can take their ever-growing audience with them pretty much anywhere they want to go.