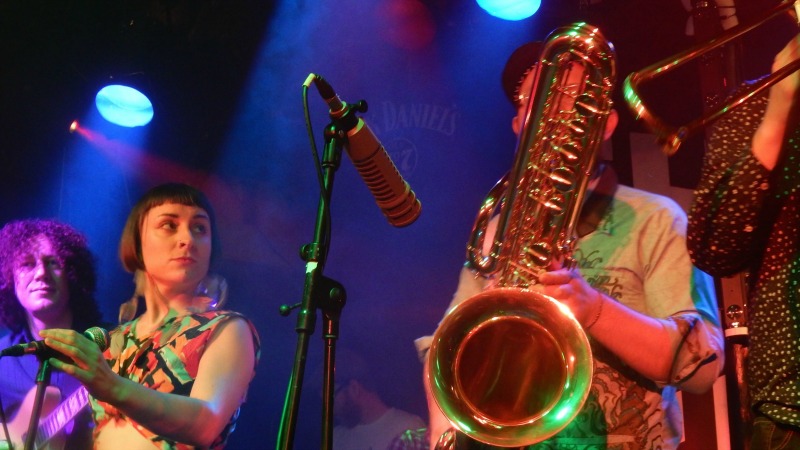 Sadly a series of bicycle mishaps meant that I only caught the last few numbers of Tezeta’s opening set but they had clearly done the job of livening the evening. The near-capacity Fleece crowd were jiving along happily to their Ethiopian-style wonky funk grooves that had, paradoxically, managed to be cool enough to warm things up.

Courtesy of the Afro-centric DJs from Hi-Life Hi-fi things carried on simmering nicely but the temperature rocketed once the 12-strong forces of No Go Stop packed onto the stage to launch their debut album Agbara Orin. The raw immediacy of their full-toned brass quartet duelling with the sizzling compulsion of a three man percussion section gave their sound both an authentic evocation of Afrobeat’s Nigerian origins and instant dance energy, while the vivid stage presence of compelling vocalist Marie Lister was only challenged by the immensity of Ben Plocki’s bass saxophone dominating the centre stage.

The authenticity was a real achievement, given that all the new material was self-written, with sufficient variety of mood and style to show the band’s confidence in taking on the Lagos legacy. Thus Animal had a contemporary R’n’B vocal and Taiyewo and Kehinde a looser jazzy feel, the two jangling guitars slipping George Benson-style motifs into the percussion flow.

The main thing is that the music was paced right – Fela Kuti’s band would play all night, after all, and it can be hard for jazz musicians (which this lot mostly are) to restrain the compulsion to dazzle. Tenor sax player John Pratt’s lengthy solo on My Mother House of Tradition was exemplary in this respect, a relaxed exposition that coasted along perfectly.

Some bands convince you that being on stage, right now, is the best bit of their day and No Go Stop are one of those, their collective enjoyment radiated from the Fleece stage and took the temperature through the roof, proving that they are definitely one of Bristol’s top live dance music experiences.