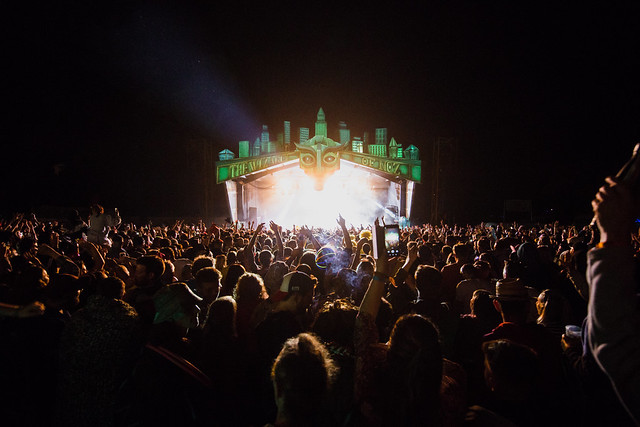 Nozstock reached the grand old age of 21 this year, and has showed no signs of slowing down, with an incredibly eclectic and versatile line up, which really had something for everyone.

I arrived Thursday morning to the same smiley faces of the security that I’ve experienced in my 12 years of coming to the farm, which has arguably one of the prettiest settings for a campsite overlooking the Herefordshire countryside. The camping has great facilities, from quiet camping, great food and decent showers and toilets. (I had the pleasure of waking up on Monday morning to a sleepy goose nestled in the grass snoozing outside my tent- a festival first for me!)

Thursday evening was spent watching the few acts that were on that night, trying some of the great food on offer, from vegan fish & chips to delicious burgers. It was great to take in all the new sights of this years theme ‘The Wizard of Noz’, which was really apparent and a lot of fun, with many pairs of Dorothy’s legs sticking out of various stages and sets. 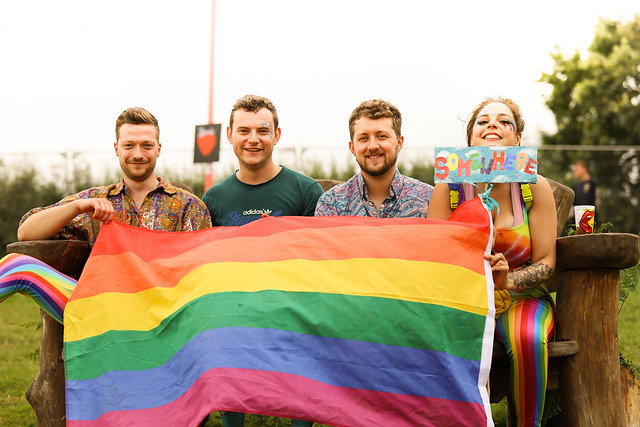 After lunch on Friday, I head down to The Elephants Grave, a welcome addition to the stages at Nozstock, which started in 2017 to provide a stage for more dub, reggae, house & jungle than it had been able to previously. First set of the day was the Subwork Takeover, with Noz veteran and local top guy Tenz shelling the dancehall classics. This was followed by Bristol based collective Kaotic Kartel playing jungle, dnb and even some cheeky raggatek at the end which had the whole crowd moving under the canopy while the rain poured down outside.

I then headed down to the new and improved Bullpen stage, this year in association with MiniRig, to watch the Billy Whizz takeover for some much appreciated hip hop & boombap beats, hosted by a great selection of Mc’s both old and new to the scene.

After a well needed pig out and change into wellies, I headed down to The Cubicles for a night of what I knew was going to involve a hell of a lot of dancing.

Scope kicked off the night with what was always going to be a solid set from local Bromyard legend. This was then followed by what was arguably the best drum n bass set of the weekend, by rising stars Affemity. This 3 women powerhouse collective blew the crowd away with a really varied mix of new and old tunes from the likes of Mampi Swift and Chase and Status- I honestly didn’t stop dancing for one second of their set and neither did the crowd- these guys will be one to watch out for in the rave and festival circuit without a doubt.

Next was The Cabinet Of Lost Secrets, Nozstock’s’s hidden gem of a stage, to watch Henge- quite possibly one of the strangest, most energetic weird acts I’ve seen at a festival, and well worth the watch for my fix of psy rock. This stage has gone from strength to strength every year- the line up just gets better and better every year, as does the set, sound and lighting and you can tell how much effort goes into curating this.

Saturday morning and afternoon was spent at Elephants Grave once again for Bristol’s Hold Tight Collective, then the unstoppable Rumble In The Jungle boys for yet more great dancehall and reggae selections. Being no strangers to the festival scene, they kill it every time. Send it!

Skinnyman’s heavily anticipated set on the Garden Stage didn’t disappoint, with classics like ‘Hold On’ getting the whole crowd singing. 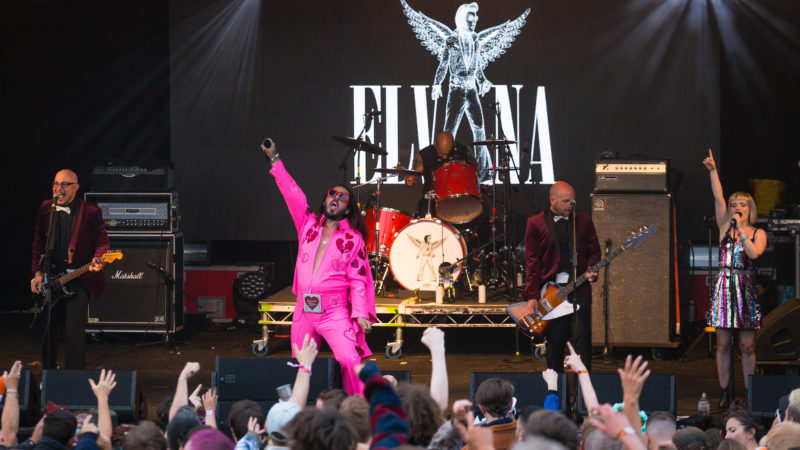 Elvana took to the main stage at 7.30 for what was always going to be an incredible show. It was a first for me ending up in a mosh pit at festival! An incredible booking who had the whole crowd singing their hearts out to classics such as ‘Smells like teen spirit’ and ‘Heart shaped box’. Just so much fun.

My tired legs then dragged me down to the ‘Department of Cultural Affairs’ stage for ‘Backyard Bingo’- a Bristol based interactive bingo fun house that everyone should try and see if you spot them on a line up- hilarious!

Saturday night ended for me watching chart toppers Rudimental. I wasn’t sure when I first found out they were playing how they would fit into the rest of the line up, but my god did they put on a show. The first half of the set were Ibiza classics, and it honestly didn’t feel like I was on a tiny dairy farm anymore. The second half was a mind blowing dnb set- undoubtedly one of the best headliners they’ve ever had and that was unanimously felt by everyone I asked over the weekend.

Waking up to a day of glorious sunshine, I headed to The Bandstand for another hip hop fill from Creatures of Habit and Smellington Piff. The Bandstand is a little wander away from the main stage but always worth checking out for more folky, family friendly music.

This was followed by another incredible afternoon and evening of drum n bass on The Garden Stage. First up was Ed Solo, followed by Bristol boys Octo Pi and Traffic MC, who played an unexpectedly ruckus and heavy set, much needed to wake up the tired crowd. 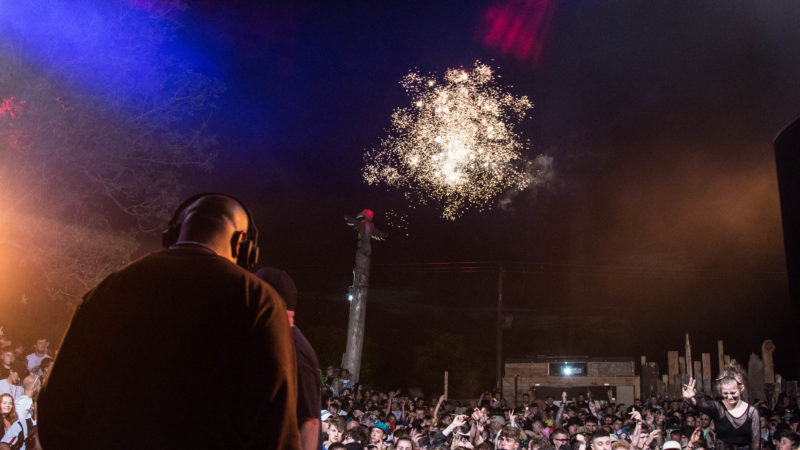 The last bit of music for me was Randall on The Garden Stage. This jungle veteran had the crowd moving from start to finish, playing so many fresh and old classics I could barely keep up.

As the weekend drew to a close, thousands headed to the hill to watch the annual fireworks display and burning of the Noz emblem into the hillside. What better way to end the festival than to be sat around so many happy, smiley faces, already looking forward to coming back next time. 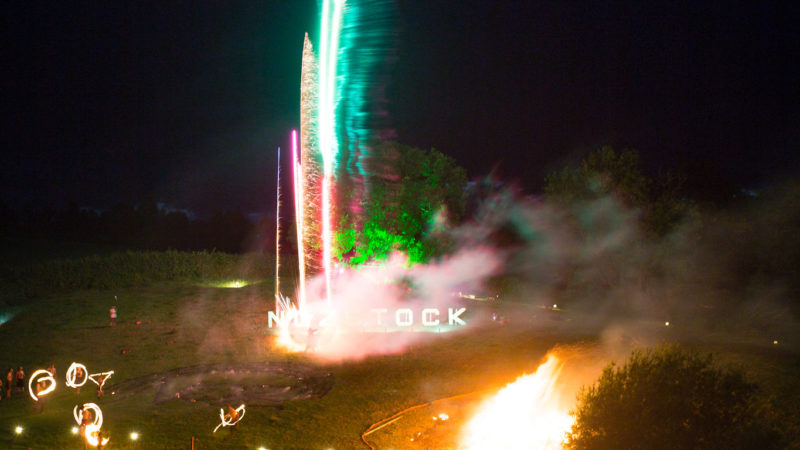 It really has been hard to find any fault with Nozstock this year. Despite the rain on Thursday and the occasional shower over the weekend, nothing seemed to dampen peoples spirits. Bravo Nozstock, until next year.