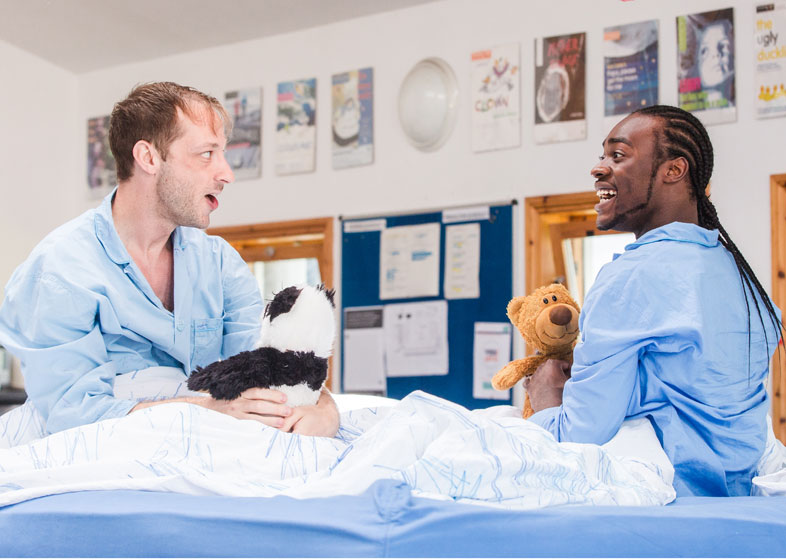 This Christmas, Bristol Old Vic have teamed up with Barton Hill’s brilliant children’s theatre company Travelling Light to bring back a much-loved piece of dance-theatre that captures the boundless excitement of two brothers waiting for Santa to arrive.

Boing! returns to BOV’s Weston Studio nine years after its debut in the same space (then known simply as the Studio) – nine busy years during which it has delighted audiences around the globe.

The show originally co-starred, and was co-choreographed by, Wilkie Branson and Joêl Daniel, and was directed by Sally Cookson, who’s since directed Jane Eyre, Sleeping Beauty, Peter Pan, Treasure Island and a host of other BOV successes. Wilkie returns now to his role as the older brother and Sally returns to direct: taking Joêl’s place as Wilkie’s mischievous younger brother is Swansea-based actor and dancer Kel Matsena. 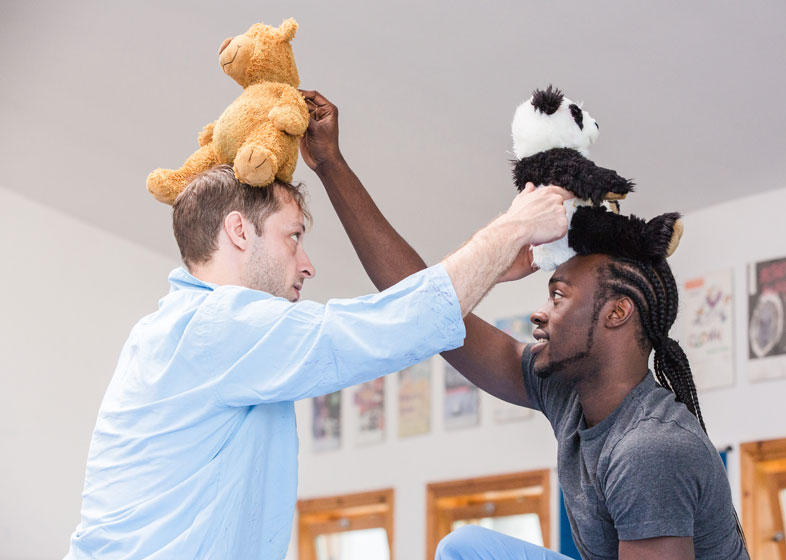 Born in Zimbabwe, Kel relocated to the UK with his family in 2008 at the age of 11, moving away from his extended family. He started dancing shortly afterwards: his first teacher was his big brother, who instructed both younger brothers in street and hip hop inspired by Michael Jackson.

At college, whilst studying heavy sciences, Kel discovered contemporary dance and ballet.  “Coming from a free expressive style of dance into the refined process of ballet was exciting, and I wanted to know more,” he explains. “However, at that point I still wanted to be a chemical engineer!”

An intensive National Youth Dance Wales course in the summer of 2015 changed Kel’s path forever. He returned to announce that he was, in fact, not going to university in a few short weeks to pursue a career in science, but was going to go down the artistic route instead.  “It took hard work and dedication to prove this to my family,” he reveals.

After being accepted into Bristol Old Vic Theatre School, Kel found that he loved acting as much as dance. “It was a fantastic course – I learned about movement and how to use it as an actor. That focus made me unashamed of coming from a heavy dance background, and I could develop as an actor and as a dancer.”

An exhilarating piece of dance-theatre, Boing! captures the delirious excitement of two boys waiting for Father Christmas to arrive on the most magical night of the year. There are beds to be jumped on, pillows to be fought with, and seas to be sailed.

Kel was thrilled to be chosen to perform in Boing!, a show that is much about dance and movement as it is about story and character portrayal. “It is so refreshing to use my skills gained over the last few years in both dance and acting. It’s a challenging show – but fantastic fun.  Even though it is children’s theatre, it requires the same amount of attention and detail as if you were doing Tennessee Williams on the West End.

“To entertain children you have to be focused and above all honest, especially when portraying a child to children. They understand the dynamics – and if you are not genuine, you lose them straight away. A lot of work goes into tapping into honesty for kids – as well as nostalgia for the older audiences!”

The whole show is performed by Kel and Wilkie as the brothers.  “Anyone who has siblings remembers that dynamic from when they are young – it’s one of the earliest relationships.”

Kel feels that Bristol Old Vic’s more intimate Weston Studio is the perfect place to perform Boing!:  “it works best when you can interact and feed off the audience”. The programming in the Studio is innovative and accessible, with cheaper tickets and a broad range of themes. This commitment ties in well with Travelling Light’s Pay It Forward initiative, where those more fortunate can help buy tickets for others who would not usually be able to access arts of this kind.

Boing! runs for five weeks over the holiday period, with ten shows per week. A highly physical show, it’s going to be some undertaking. After two weeks of rehearsals in November, preforming 50 shows on the, erm, bounce will be no joke.

Kel and Wilkie undoubtedly have the energy to make families smile throughout December and into January. “After we finish, the very next day I am working again with the same director, rehearsing for A Monster Calls ahead of a six-month tour,” Kel reveals. “Lots of vitamins will be needed!”

Boing! is at Bristol Old Vic Weston Studio from November 29 2019 to January 5 2020. For more information and to book tickets, visit www.bristololdvic.org.uk/whats-on/boing