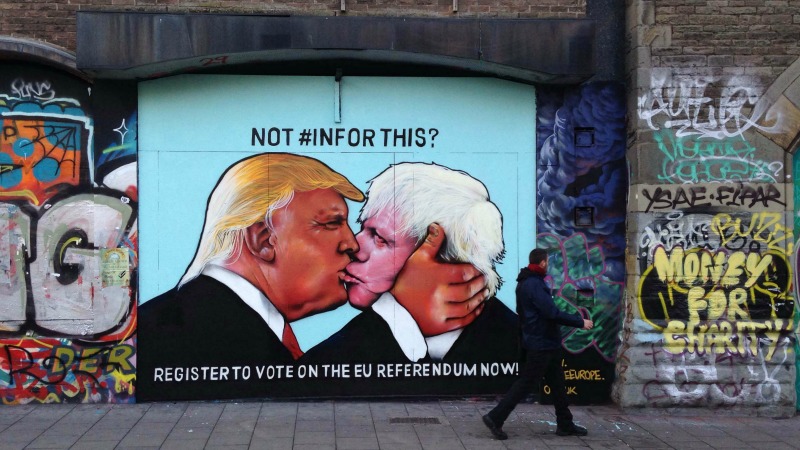 Donald Trump and Boris Johnson are pictured in a passionate embrace in a new piece of street art on Stokes Croft by the Paintsmiths crew Felix Braun and Jack Dones.

The lips of the US presidential hopeful and former London mayor are locked together, with Trump’s hand placed tenderly on Johnson’s neck. Both men are sporting their infamous hairstyles.

The piece appeared on hoardings in front of the Carriageworks on Monday, with its aim seemingly to vote people to remain in the EU in next month’s referendum.

‘Not #inforthis?’ reads the text above the two besuited men, with passers-by urged to register to vote and a web address written next to the painting: wwwweareeurope.org.uk

The piece has been influenced by a recent work in Lithuania showing Russian President Vladimir Putin and Trump in a similar clinch:

And that is a homage to a 1979 photograph that showed Soviet leader Leonid Brezhnev and East German President Erich Honecker locked in an embrace, which was later turned into a mural on the Berlin Wall.

My God, Help Me to Survive This Deadly Love