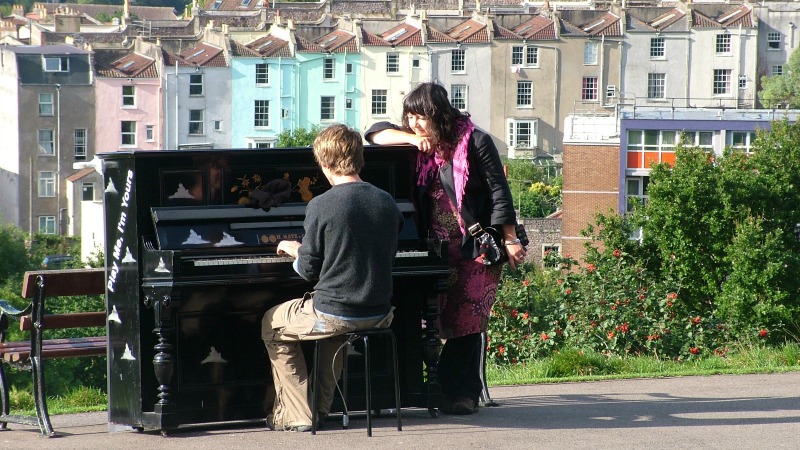 Bristol artist Luke Jerram first had the idea for Play Me, I’m Yours when visiting his local launderette.

“I saw the same people there each weekend and yet no one talked to one another. I suddenly realised that within a city, there must be hundreds of these invisible communities, regularly spending time with one another in silence.”

Placing a piano into the space was Jerram’s solution to this problem, “acting as a catalyst for conversation and changing the dynamics of a space”.

In the decade since the first Play Me, I’m Yours was hosted in Birmingham, more than 1,500 street pianos have been placed in 50 cities across the world, which have been played and listened to by more than 10 million people worldwide.

This summer, the piano trail is set to return to Bristol for the first time since 2009 with more than 20 pianos in public spaces all individually decorated by local artists and community groups.

For the first time, the project is being funded through sponsoring individual pianos.

“I’ve been very encouraged by the support we’ve already received from organisations across city, but we need a few more sponsors to come forward to make the project viable,” said Jerram, known for the Park Street water slide and fishing boats within Leigh Woods.

“We can only make this musical arts trail happen for the people of Bristol if we get this critical support.

“Bristol is famous for its strong cultural community which is why this project is so ideal for the city.

“The reason it has taken off around the world is because it provides a blank canvas for everybody else to share their creativity and talent with each other.”

Sponsors for the Bristol trail will get to have a say in how their piano is decorated and have their own events incorporated into the official trail, as well as determining at the end of the project what happens to their instrument, either deciding to keep it or donating it to a local community or charity.

Destination Bristol head of tourism Kathryn Davis said: “Trails are hugely popular in our city and are a brilliant way of encouraging Bristolians to explore some of the city’s fantastic attractions, as well as bringing new visitors from the UK and overseas.

“This one is different because it actively invites the local community to participate and showcase their talent. This project also offers a great opportunity for businesses to leave a legacy by donating a piano to a good cause.”

Any organisation interested in sponsoring a piano and helping to fill Bristol’s streets with music this summer should contact Sally Reay at admin@streetpianos.com