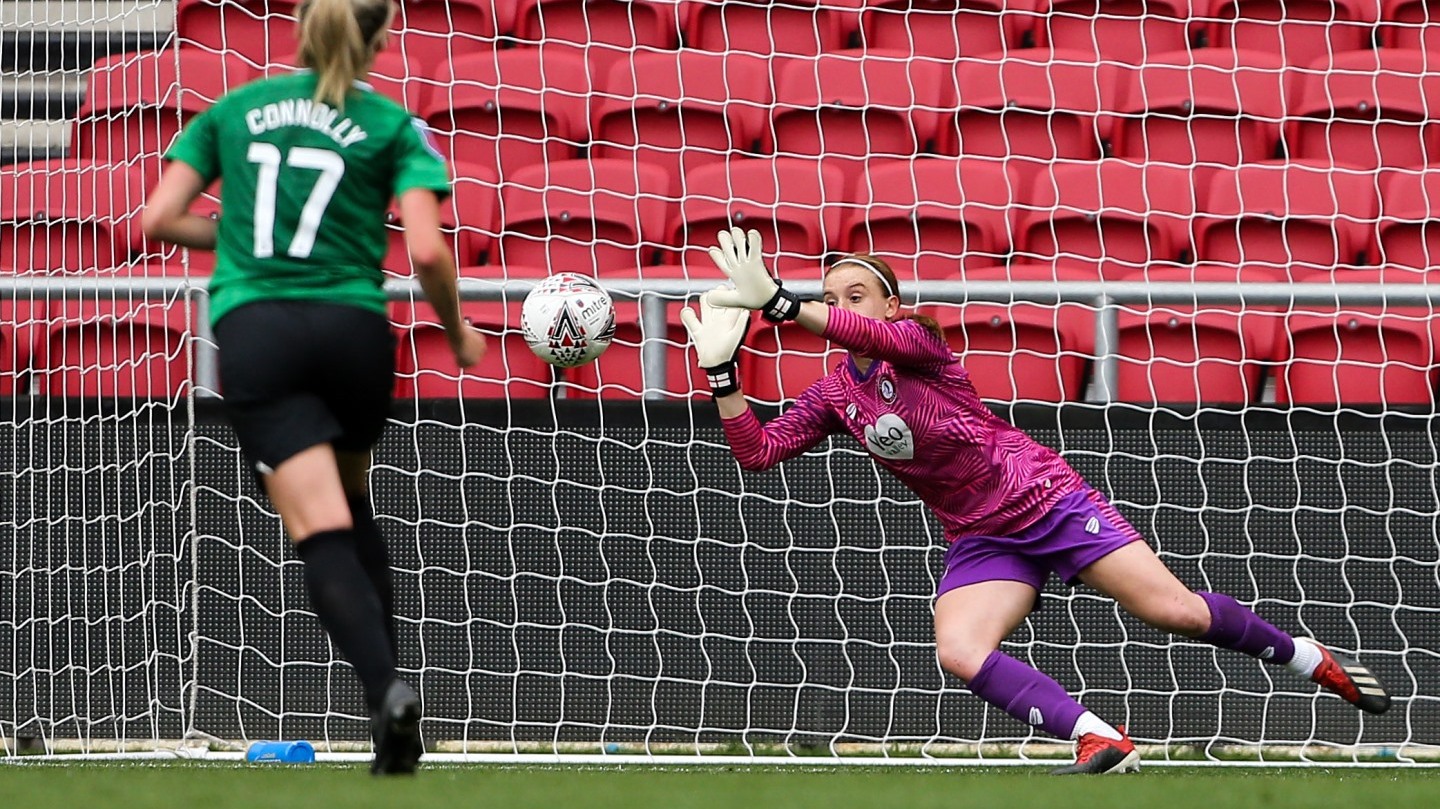 Sophie Baggaley’s first-half penalty save earned Bristol City Women a point as they drew 0-0 with Brighton & Hove Albion in front of more than 3,000 fans at Ashton Gate.

The Robins shot-stopper has picked up where she left off at the end of last season with a fantastic performance in City’s first FA Women’s Super League game of the new campaign.

The 22-year-old keeper once again showed why she was in the PFA Team of the Year, with a player-of-the-match performance and another clean sheet, making some impressive saves throughout the game as well as saving the penalty on the stroke of half-time.

“A clean sheet is great for me personally and for the team,” Baggaley said after her first match at Ashton Gate.

“We have a point on the board to kick start the season and it’s something to build on.

“It was brilliant to play at Ashton Gate. I think it was a great occasion and all the girls enjoyed it. It’s important that we keep momentum and make sure that the crowd come to the rest of our matches this season.”

City Women manager Tanya Oxtoby praised the support from her team’s record ever attendance of 3,041

She said: “The crowd were brilliant all day and got right behind the girls. The atmosphere was sensational, so we thank them for coming out and for their support. We really felt that, especially in the second half when we started to get some momentum.”

She added: “It’s fantastic for Sophie. We know how hard she works week in week out and the level of detail the coaches go int with her before each game. She’s a class act, but now she needs to execute that week in week out.” 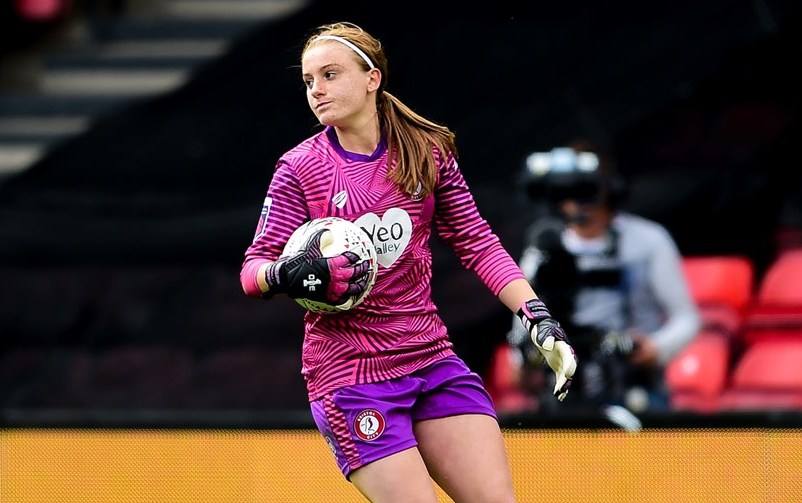 The first chance of the game fell to the Robins seven minutes in when Abi Harrison got onto the end of a perfectly-weighted through ball from Lana Daniels. However, Megan Walsh was quick off her line to deny the striker.

Another chance came for City when Carla Humphrey’s first time shot from Charlie Welling’s lay-off was saved comfortably by Walsh.

Aileen Whelan forced a good save out of Baggaley when she capitalised on a loose ball and cut onto her right, only to see her shot tipped over the woodwork.

Brighton were awarded a penalty five minutes before the break after Gemma Evans caught the trailing leg of Aileen Whelan. Victoria Williams stepped up to take the penalty, but Baggaley was equal to the defender’s effort, making a brilliant save to keep the score level. 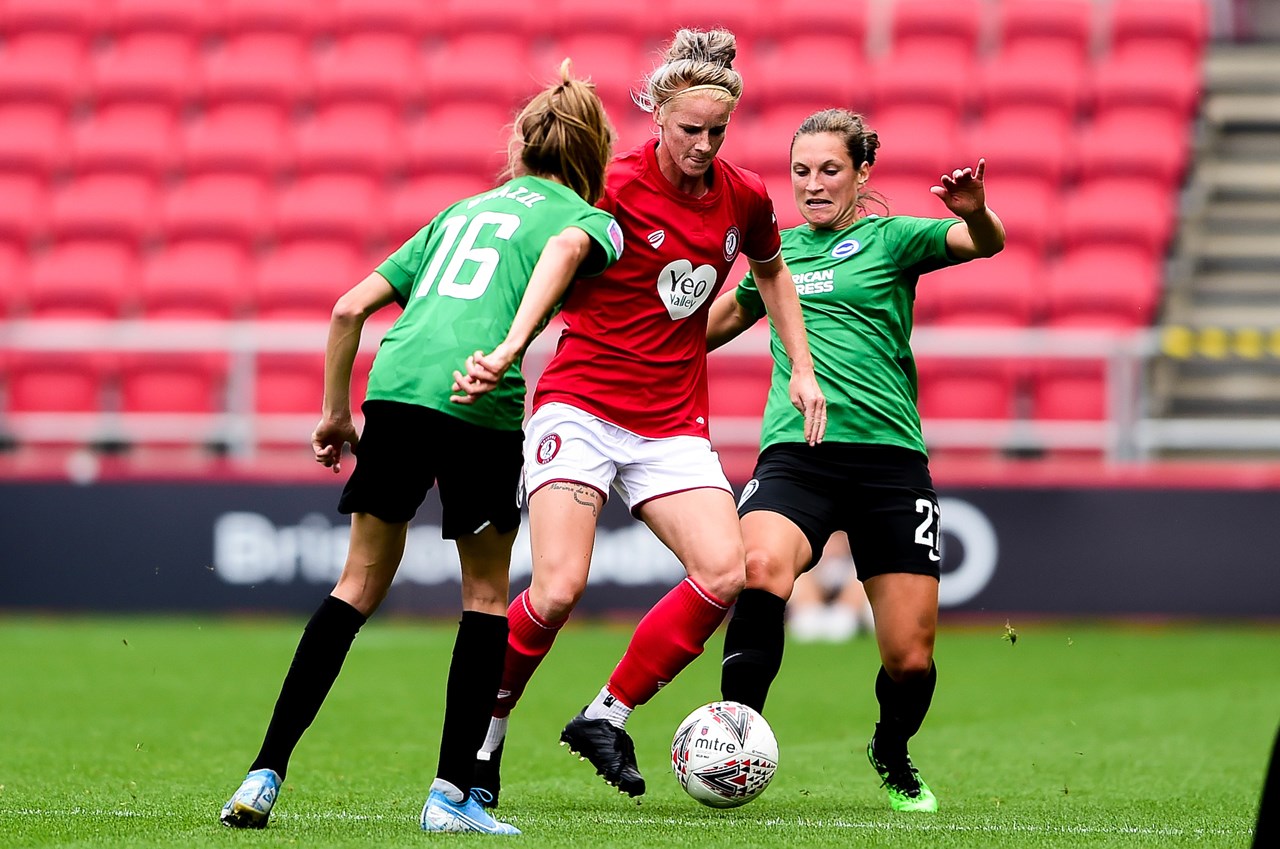 Jas Matthews battling for the ball – photo by JMP

The first big chance of the second half came ten minutes from the end when substitute Ebony Salmon’s nutmeg inside the box ran through to another substitute Olivia Chance but her effort was tipped over by Walsh.

The impact of Salmon coming onto the pitch was noticeable, with the Brighton defence struggling to handle her pace on the wings. She had a chance to win it at the death when a cleared corner fell to the feet of Salmon 25 yards out, but her curling effort rebounded to safety off the crossbar.