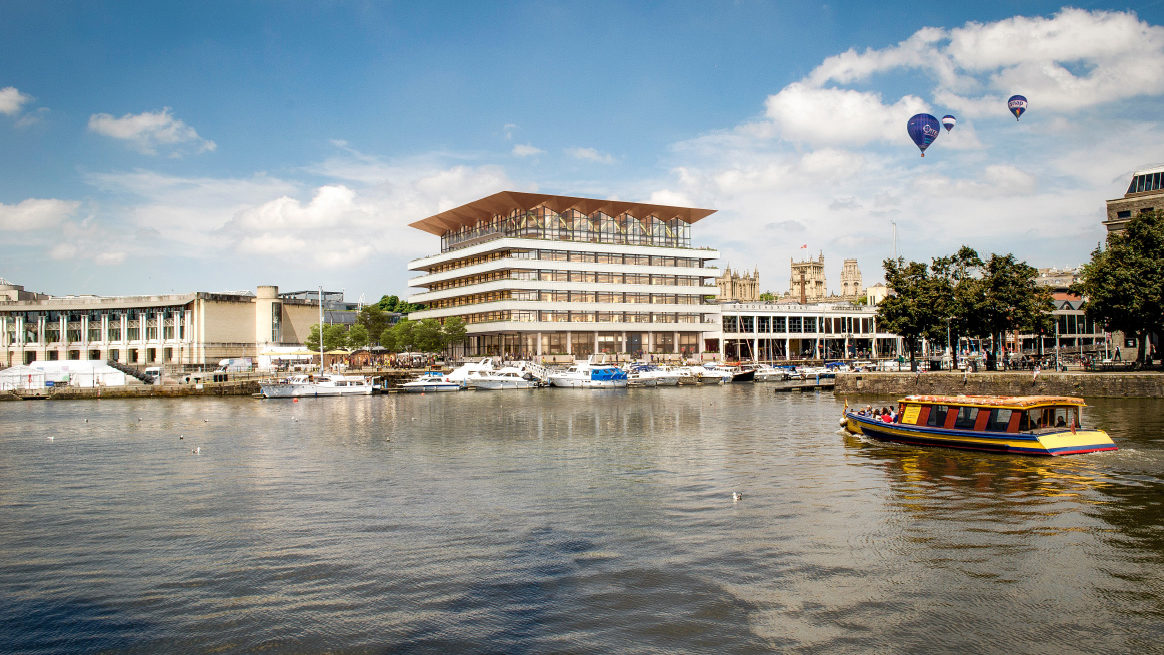 It may be hard to remember Canon’s Marsh before 2000. Other than the Lloyds building, we had a car park, a few derelict or unused buildings and the odd car boot sale in the old railway goods depot. Today it is one of the most visited parts of the city – enjoyed by thousands of Bristolians.

The Bristol Initiative (part of Business West) working in close partnership with Bristol City Council could see the great potential for this site and its ability to re-energise this part of our city.

The idea was to add cultural attractions, new housing, offices and other uses. By 1996 we had developed an agreed master plan used to demonstrate to the Millennium Commission that with their support for the cultural attractions the rest of the area could attract major investment.

Science World (now We the Curious), Wildscreen World and an IMAX cinema with new major public spaces and the underground car park were all (just) completed by December 31, 1999! The reused transit sheds on the eastern edge were already home to Watershed, other uses then added to the mix and Pero’s Bridge was completed. 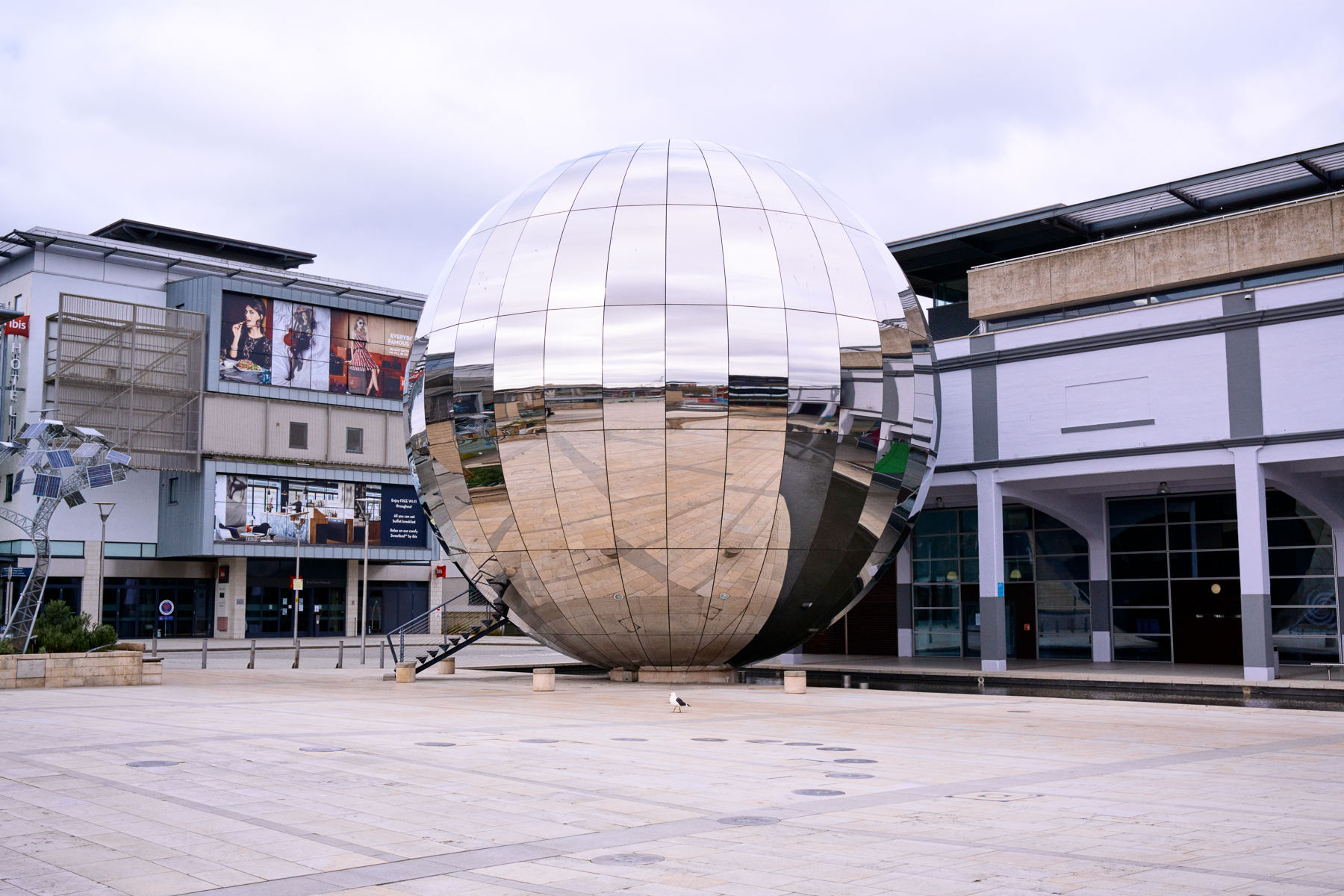 We The Curious was one of several buildings constructed just before the turn of the millennium. Photo: Simon Holliday

The Millennium buildings and spaces were the subject of architectural design competitions and have won national awards. The transformation the Business Initiative and the Council envisaged 25 years ago has largely come about, with extensive public use of the attractions, new spaces and waterfront.

However, a key site next to V Shed allocated for a long-planned Centre for the Performing Arts, which was to be largely funded by the Arts Council, did not come to fruition and the site remains largely unused.

With no public use in prospect, the council put this site on the market in 2017 with expectations of a high-quality building appropriate to this unique site. A mix of uses was proposed but residential was considered inappropriate.

Given the key characteristics of this site local expectations are high. Regrettably the current pre-planning application proposal does not in our view meet the aspirations we all have for this site. 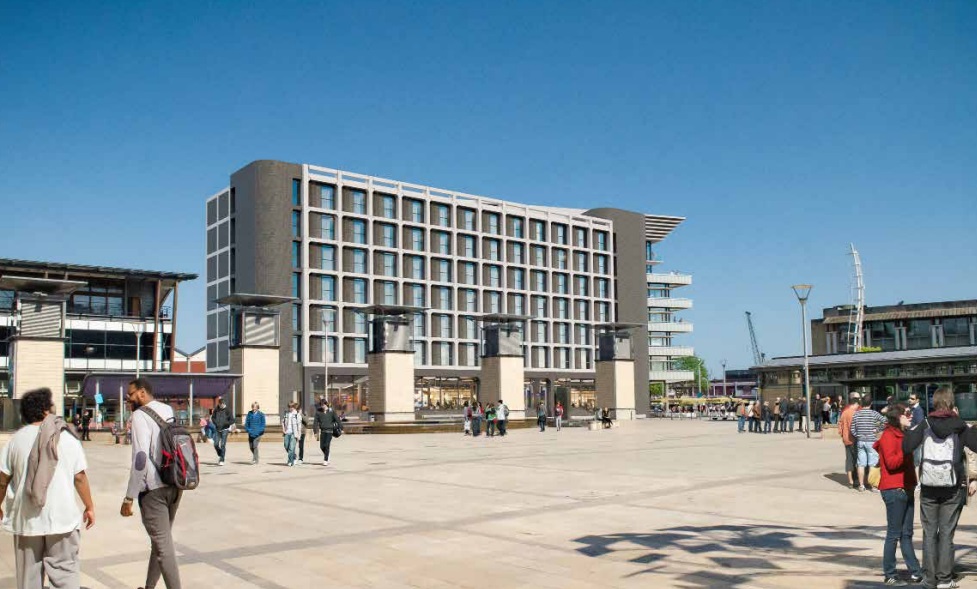 Waterfront Place would be located next to Las Iguanas and Pryzm on Millennium Square. Image: AHMM

The problem here is partly the brief to the architects. Two very different uses are required.

The requirement for deep plan offices have been provided in a square plan leading to a building width greater than its height, which produces an uncomfortably proportioned block. The top two floors are recessed under a “sculptural roof profile”.

This element added to “break down the size” feels unresolved in relation to the lower storeys and is not helpful to the overall proportions and form of this block. The elevational treatment with its strong horizontal emphasis – identical on three sides despite different orientations – then adds to its overbearing and strident presence. This element is significantly taller than Arnolfini opposite.

The hotel element sits next to the offices largely facing Millennium Square. There is no attempt to address the inherent repetitive nature of this element with a “warehouse form” quoted as the design intention. This elevation facing the square is of particular concern. 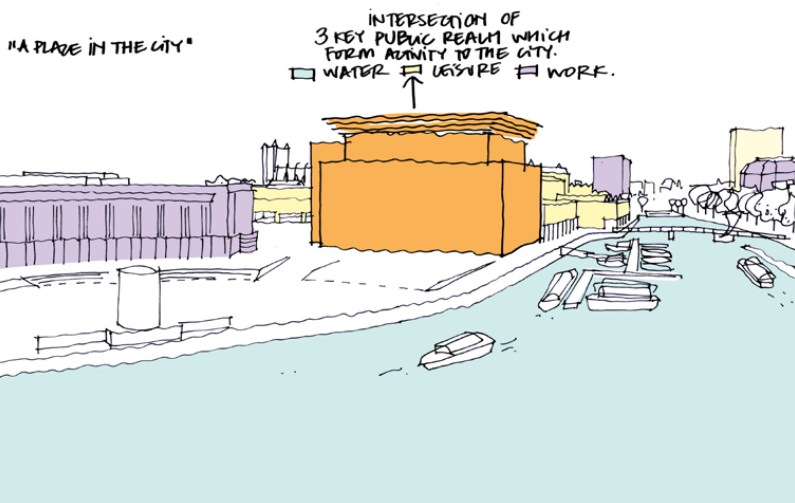 The building would be significantly taller than its surroundings. Image: AHMM

The planning brief and indeed the applicant’s brochures recognise the critical nature of this site. It is close to the junction of the harbour and St Augustine ‘s Reach, has a context of listed and notable buildings, is highly visible in key views and has excellent views out.

It is a site with great potential where good buildings could both relate to and enhance this context and be an exemplar of contemporary architecture.

Sadly, this proposal does neither in our view. A rethink is urgently required.

The site in council ownership is larger than is actually being used and might be able to include the part over which Lloyd’s have a covenant, perhaps allowing alternative massing.

The brief might also include public facilities taking advantage of the location and views. Perhaps, a residential element could be reconsidered allowing a more adaptable form of architecture.

And, of course, any proposal would need to incorporate effective carbon reduction measures.

An open discussion of options for this valuable site at the heart of our city would now be very helpful.

David Mellor was director of Alec French Architects for 30 years. He is now vice president of the West of England Initiative, which helps to shape the future of the city and its communities.