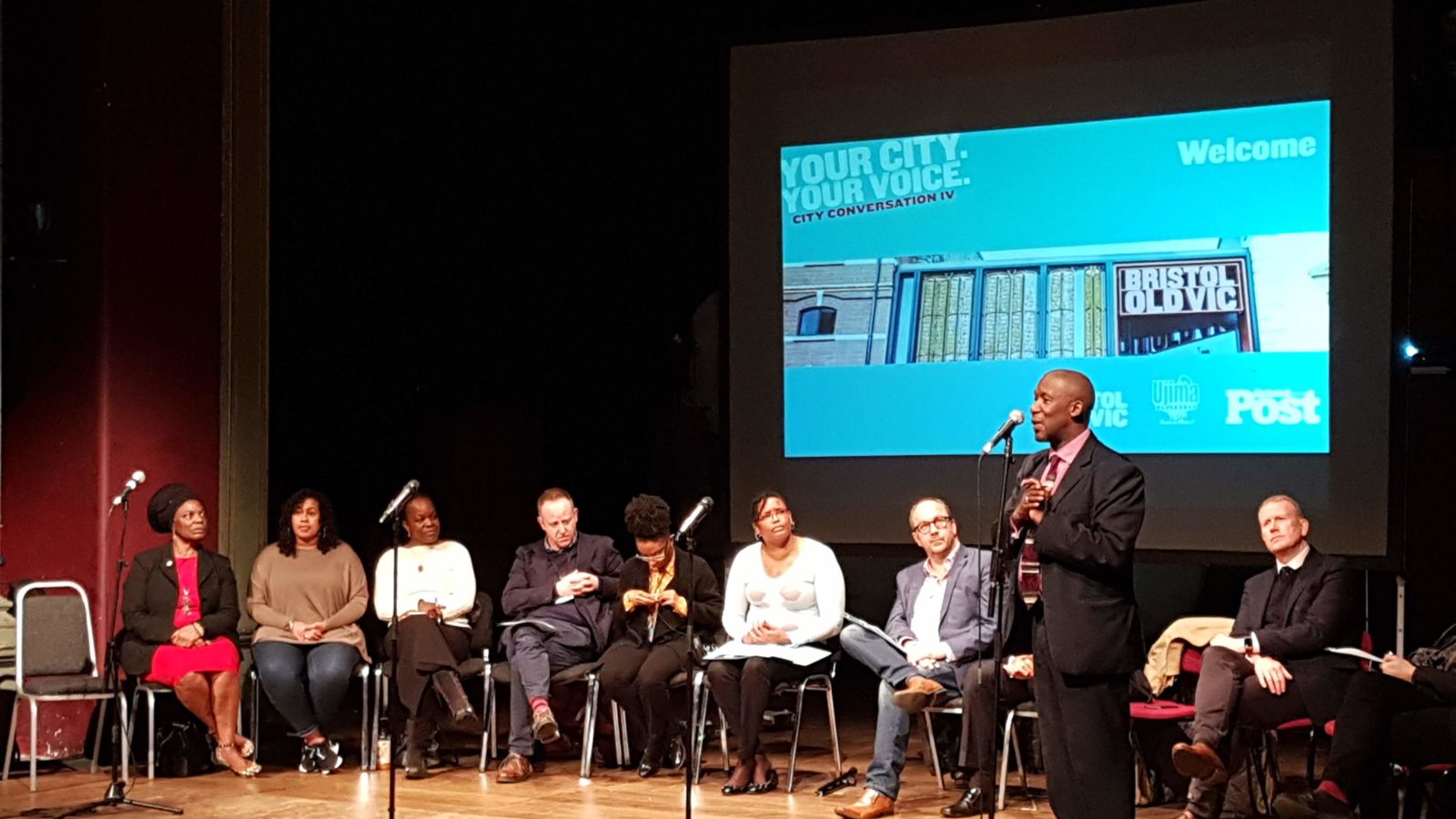 Bristol is launching a new curriculum to truly represent the history and contributions of black people, in a move hailed a powerful step forward for the city.

Students will no longer be taught about their heritage through a “white prism” under the programme set to be piloted in four schools in March.

It is one of four key pledges to have come out of the City Conversations, hosted by Bristol Old Vic, Ujima Radio and the Bristol Post.

The call for city-wide change was prompted by the Runnymede Trust report published in January 2017, in which Bristol was branded the most racially segregated core city.

Taking to the stage in Bristol Old Vic on Monday evening, Aisha Thomas, the assistant principal at City Academy who highlighted the lack of BAME teachers in a BBC documentary, spoke about the need for a new curriculum.

“Students have said they were fed up of hearing the same things,” she told the audience.

“They wanted to feel much more empowered to have conversations. And also feel that it’s not just white people talking about black history.

“Our children are glad this is actually happening, and I think it’s really powerful that schools are willing to go above and beyond to offer this to students.

“Students need it, but they also want it. The fact they have the opportunity to gain it is a powerful step forward.

“It’s not just about representation, it’s about unconditional acceptance. My students talk very passionately about it being more than just representation, so they do not feel like a statistic but truly have a voice.

“The power is in each of us but also in those offices where those doors are shut and we need to keep knocking down those doors.” 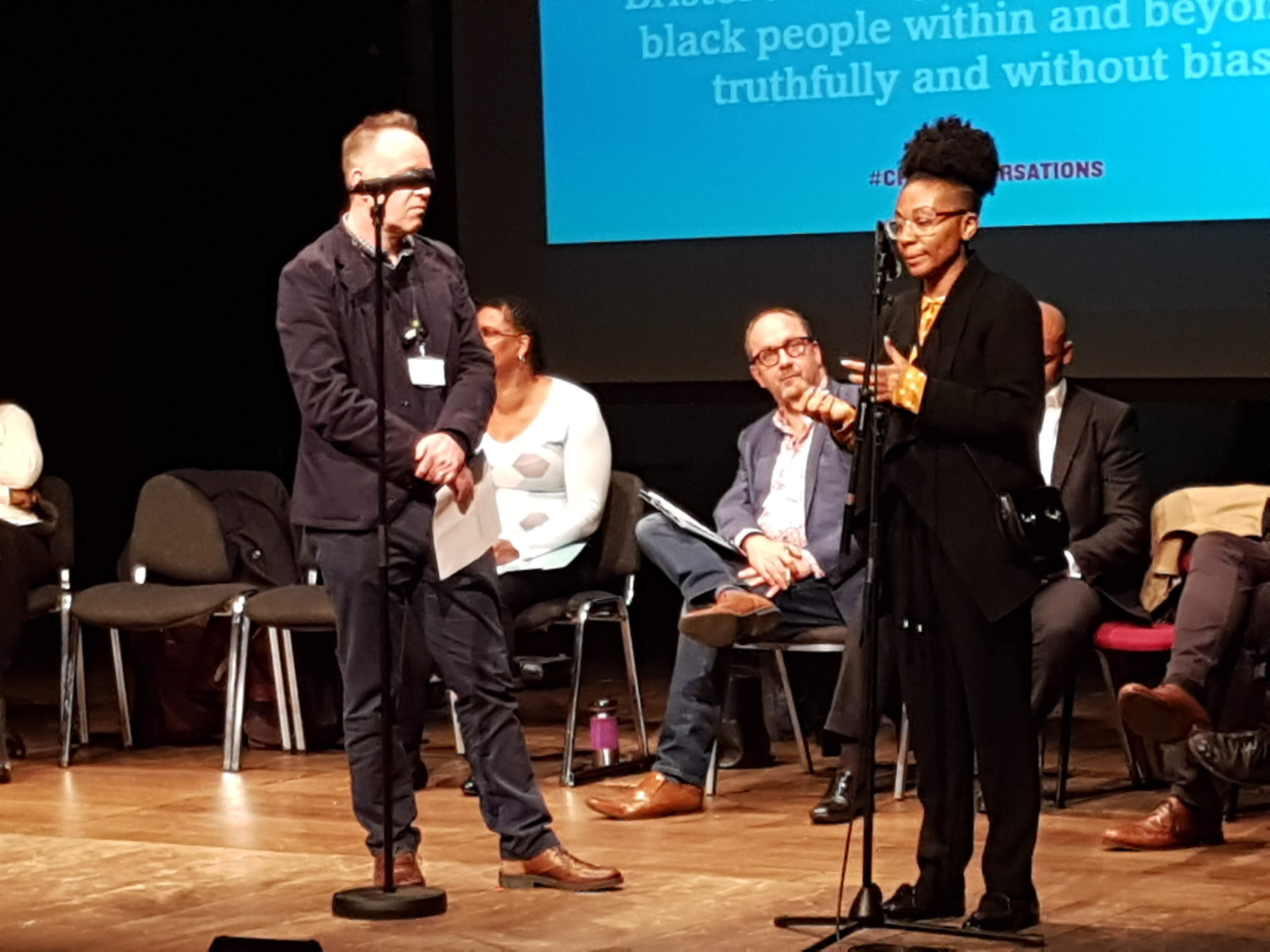 Phil and Aisha outline plans for the new One Bristol Curriculum

Phil Castang, of Bristol Plays Music, said the curriculum to date has been “built in a white prism” and leads to a “superficial condensed version of black history” achievement.

“Segregating history and achievement in this way perpetuates the misconception that a few heroic figures from the civil rights movement and sport represent the sum contribution of black people on civilisation,” he said.

The One Bristol Curriculum will sit alongside the existing school curricula and aims to better represent how black culture and people have helped shape Bristol and beyond.

The other three pledges to have derived from conversations held in different locations across the city are:

–       To achieve better representation at board and governance level in both the commercial and not-for-profit sectors.

–       To achieve better representation in middle management across the city, especially in schools and other places where visible role models are so vital.

–       To find an appropriate permanent way over the next ten years to commemorate the city’s relationship with the Transatlantic Slave Trade.

“I have been fighting this struggle for a very long time,” said deputy mayor Asher Craig, as she took to the stage to speak of the need to be purposeful in changing the make up of institutions and leadership teams. 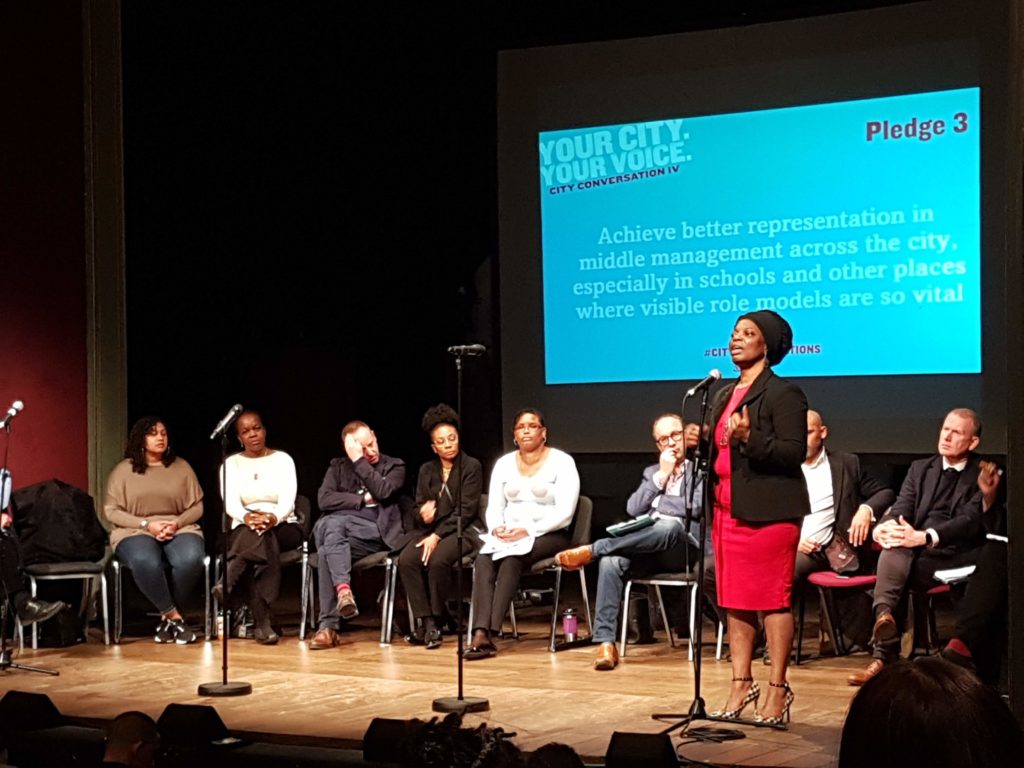 Asher Craig talks of the need for a purposeful approach

Confirming their will be roundtable talks to decide on a suitable way to commemorate the slave trade legacy, she said: “I think it’s a failing of our city that we have no permanent legacy of contributions black people have made here in this city and I’m not just talking about the bus boycott or carnival.

“If we are going to have a permanent way to commemorate this, we need to hold a conversation and have roundtable discussions.”

The deputy mayor also revealed plans for an immersive art installation called CARGO (Charting African Resilience and Generating Opportunities), which is the brain child of poet Lawrence Hoo, due to be ready by March 2020.

A few extra words from @MarvinJRees as #CityConversations continues to generate positive discussion in our foyer. pic.twitter.com/GfhmyL8LlM

Bringing the evening to a close, mayor Marvin Rees gave his reflections.

“Being in this room fills me with some hope, but that does not mean it’s hope without challenge. I welcome the conversation and what’s being done,” he said.

“This will be an incredibly difficult challenge, but I welcome that we have opened the door to taking it on as a city.”

He spoke of the need to not just address racism, but also whiteness and white privilege, adding that it’s not about guilt, but about leadership.

The mayor concluded: “I do feel there is something in Bristol right now, it’s up to us to make sure it takes off.”

Read more: ‘White people need to step up for a change’