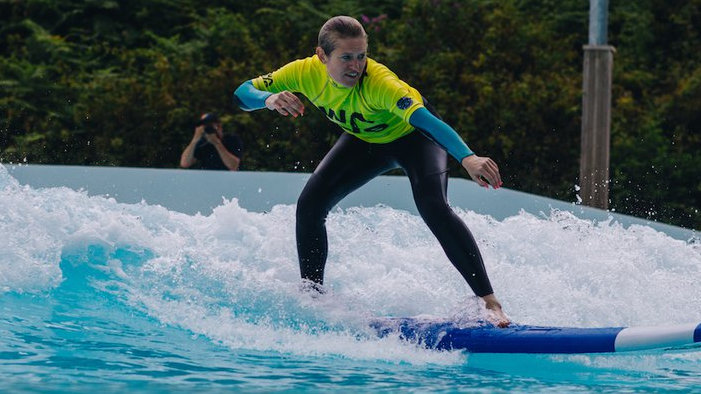 Bookings are now open for Bristol’s £25m inland surf lake, as a vision first unveiled years ago is set to become a reality this autumn.

The team behind The Wave say the key aim of their ambitious project is to “create a place where anyone and everyone can surf on safe waves, all year round, and experience the many mental and physical health benefits it offers”.

Members of the public can now book tickets to surf from November 18 2019 to March 4 2020, as the venture opens for a ‘warm-up phase’ to enable people to experience the lake and clubhouse while final landscaping is being completed on the 77-acre site in Easter Compton, north of Cribbs Causeway.

Speaking about the project, founder Nick Hounsfield said: “Surfing makes you feel alive. No matter what level you are at, being in the water and having fun is rejuvenating.

“We are all so busy in our day-to-day lives that we don’t take that time out to step back, reset and simply ‘be’. I found that surfing and being close to nature really worked for me and I wondered if there was a way of giving more people access to this feeling of wellbeing.

“I wanted to create a place where anyone and everyone can surf on safe waves, all year round, and experience the many mental and physical health benefits it offers.”

The 200m surfing lake is at the heart of the project and surfers of all abilities will be able to enjoy up to 1,000 waves per hour, from 50cm to 2m, generated by cutting-edge technology

The Wave founders say their venture is not just about surfing, but also about sharing incredible experiences and improving health and wellbeing.

The Wave secured permission on Tuesday to serve alcohol and play music until 11pm each day – a flexible licence the project bosses is necessary to ensure it is a viable enterprise and able to thrive.

A number of residents had called for The Wave’s licensing application to be thrown out or at least constrained, fearing disturbances late into the night, drink driving and chaos on the roads.

Representing objectors at Tuesday’s licensing hearing, barrister Daniel Mansell said: “There’s a great deal of concern among residents that they have been misled. The feeling is it’s been changed from a sporting centre to a live entertainment centre.

“The application flies in the face of assurances that the park would close at 6pm. Residents feel the goalposts are constantly shifting.”

Mansell said it was difficult to understand the impact on residents if they did not know how often events would be held and told the councillors The Wave should not be given “carte blanche” to do what they like.

The applicants said there had been a lot of “misinformation” about their proposals, which are primarily about surfing, and they needed a flexible licence so the business can thrive.

Supporting the application, Simon Meads said the licence The Wave has applied for is no different from the nearby golf club. Responding to concerns about people drinking near the surfing lake, he said sailing clubs manage without incident.

He added: “Viability depends on a flexible drinks and entertainment licence. It’s in our interest to end up with a viable amenity, rather than a muddy hole in the ground.”

The Wave operations director Ian Williams said: “I’ve listened to a lot of stories I fundamentally don’t recognise. The site will be totally marvellous.

“This is all about surfing and getting people active and into nature. It’s nothing to do with the stories we’ve heard.

“At the moment we’re building one destination. We have huge aspirations to build other sites down the line.”

He said there will be teams of staff to keep people safe, for example by preventing them surfing after drinking too much, plus 24-hour security and CCTV.

“Alcohol is a relatively minor part of the application. We wanted the application to be as flexible as possible without impacting on our neighbours.”

As well as the surfing lake, there will be food and drink, a surf shop, gardens, meadowland and woodland, peaceful hideaways, and family-friendly camping from Spring 2020.

To find out more and to book a surf visit www.thewave.com.

Stephen Sumner is a local democracy reporter for South Gloucestershire