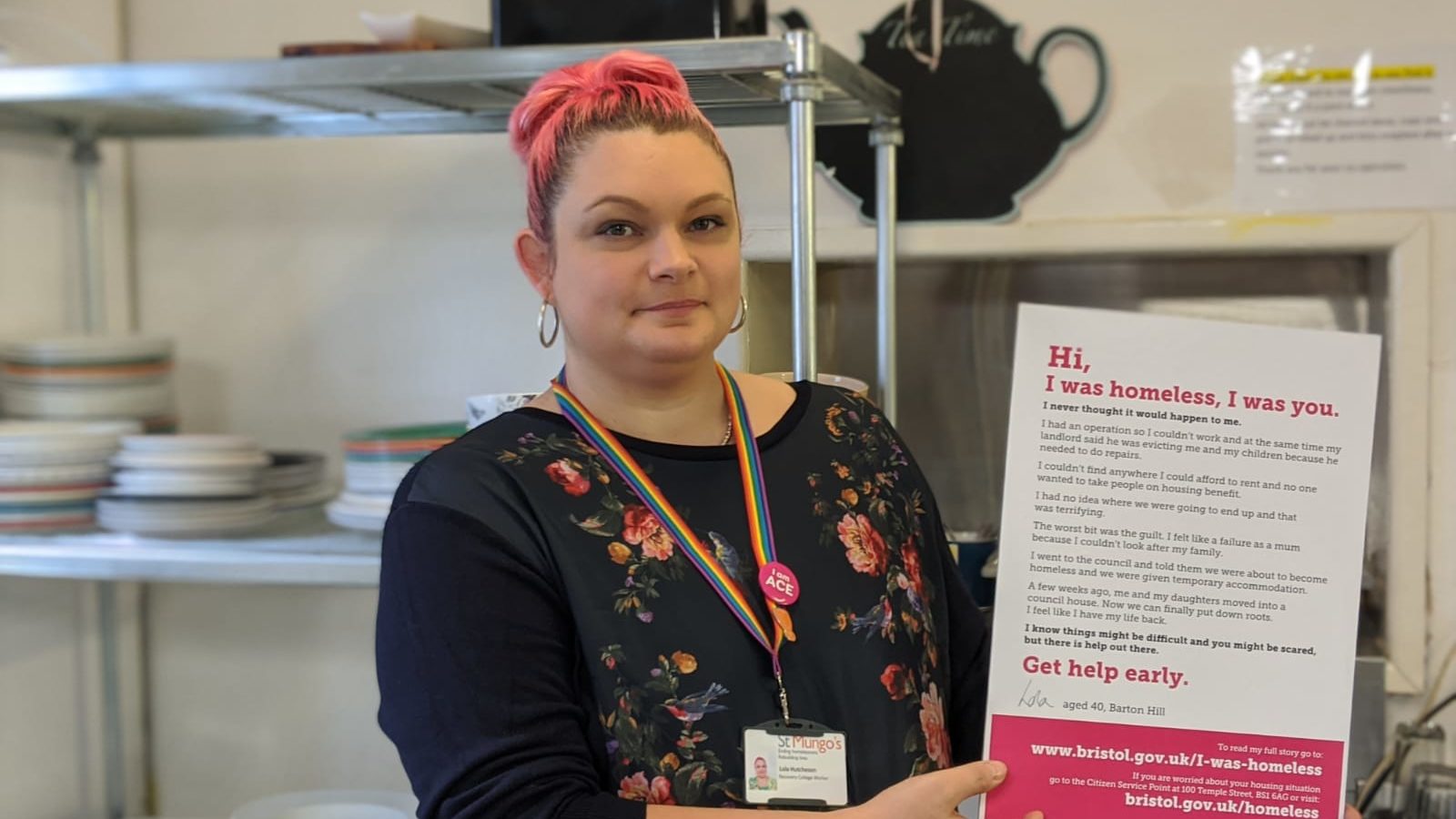 When Lola dropped her children off at school on the morning of her eviction, she had no idea where her family would go that night.

Things started to spiral for the mum-of-two when she had a knee operation so was unable to continue working at her restaurant job. Her landlord issued a notice for her to leave so repairs could be carried out on the house, but most providers wouldn’t even consider accepting a tenant on housing benefit.

Left with no options, Lola, 40, was forced to apply for statutory homelessness.

“I had no idea where we were going to end up and that was terrifying,” wrote the Barton Hill mum in a letter reflecting on her plight.

“The worst bit was the guilt. I felt like a failure as a mum because I couldn’t look after my family.”

She has opened up about her story in a bid to reach out to other people in similar situations. Her letter, along with others written by people who have been homeless, will appear in prominent places around the city from Monday, January 13 as part of a campaign by Bristol City Council and partners.

The aim is to not only reach people who are sleeping rough, but also those at risk of homelessness, to encourage them to take what for many can be a difficult first step towards accessing help and support available.

Lola is now employed full-time at St Mungo’s homeless charity and has a stable home for her and her daughters, but she won’t easily forget the time when instability and worry were a daily presence.

“When I got the eviction notice, I rang Shelter. They advised me to apply for statutory homelessness, which is something not many people know about.”

Lola says the year-long eviction process was in many ways the worse part because of the uncertainty as to where the family would live.

“All this time I had to get my kids off to school and also had to make sure they did not worry,” says Lola, speaking to Bristol24/7 at a table in St Mungo’s New Street building.

“I took them to school the morning of the eviction and then went to the council and presented as homeless. I had all my essentials packed in the car but didn’t know where we’d be.”

Lola and her children were found emergency accommodation. She says while the flat was nice enough, it was still a temporary solution and she worried daily that they might lose it.

“The thing about temporary accommodation is you do not have all your stuff; you can’t unpack so it’s living out of bags, it’ never really your home,” she says. The council was eventually able to find a permanent home for the family. “It’s not where I’d have chosen to be but it’s nice and it’s given us stability – we have carpets and pictures on the walls,” says Lola with a smile.

She advises anyone facing a similar situation not to bury their head in the sand, saying: “As soon as you get a section 21 (eviction order), go to the council. I think people don’t know to go there and they are often a bit frightened of it.”

One of the key messages of the campaign is to seek help early. A range of prevention services are available in Bristol, including a welfare rights and money advice service and a Youth Homelessness hub (Bristol Youth MAPS) to help young people to stay with their families where possible.

The council says these interventions stopped more than 3,600 people from becoming homeless in 2018.

“I am living proof that there is a different life for you. You just need to be ready to reach out and take it,” writes John, who has also documented his story in a letter.

“At 17 I started sleeping rough and was addicted to drugs. At that time, all I had was my bedding, nothing else.

“There were a lot of services trying to help me, but at that point, I wasn’t ready. Thankfully people didn’t give up on me.” 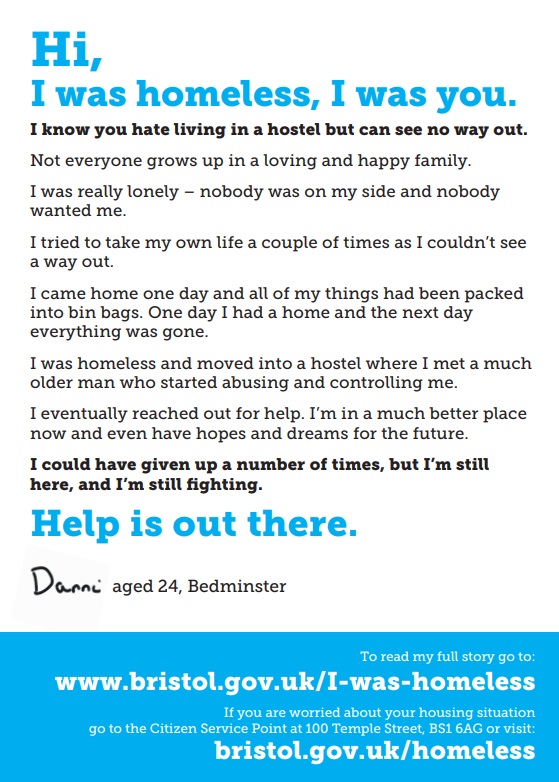 Danni hopes her letter will encourage others in a similar position to seek help. Image thanks to Bristol City Council

Danni, 25, faced a cycle of abuse from childhood that saw her vulnerable, suffering poor mental health and living in hostels.

“It was horrific,” she tells Bristol24/7, reminiscing on the first night in a hostel.

“I had lost everything. I was literally on my own with my suitcase. The whole thing about being homeless is the hostel is not your own place, it’s only ever temporary.”

Danni eventually sought support and went on a mentoring course with 1625 Independent People, a charity that supports young people who are homeless or at risk of homelessness.

“I’m now back at college and I have a five-year plan. Being in temporary accommodation, you don’t know where you are going to live or what you are going to do, you can’t plan five minutes ahead let alone longer. I’m hoping to go to university to go into either social work or nursing.”

Bristol has seen an increase of people sleeping rough over the past five years, a trend that is reflected nationally. The last quarterly counts have found an average of 117 sleeping rough on the street.

Paul Smith, the cabinet member for housing, said: “Homelessness is not restricted to the people we can see sleeping on the streets. We have families in temporary accommodation, individuals staying in hostels and many more people we don’t know about sofa surfing or sleeping in unsafe buildings.

“Ending homelessness in all its forms is one of our top priorities, and we want everyone to know that help is available.”

Anyone at risk of homelessness is advised to seek help as soon as possible to avoid reaching crisis point. Visit www.bristol.gov.uk/homeless for more information about help available.

Advice and support are also available from Citizens Advice, ACFA, ACORN and Relate.

Main photo thanks to St Mungo’s