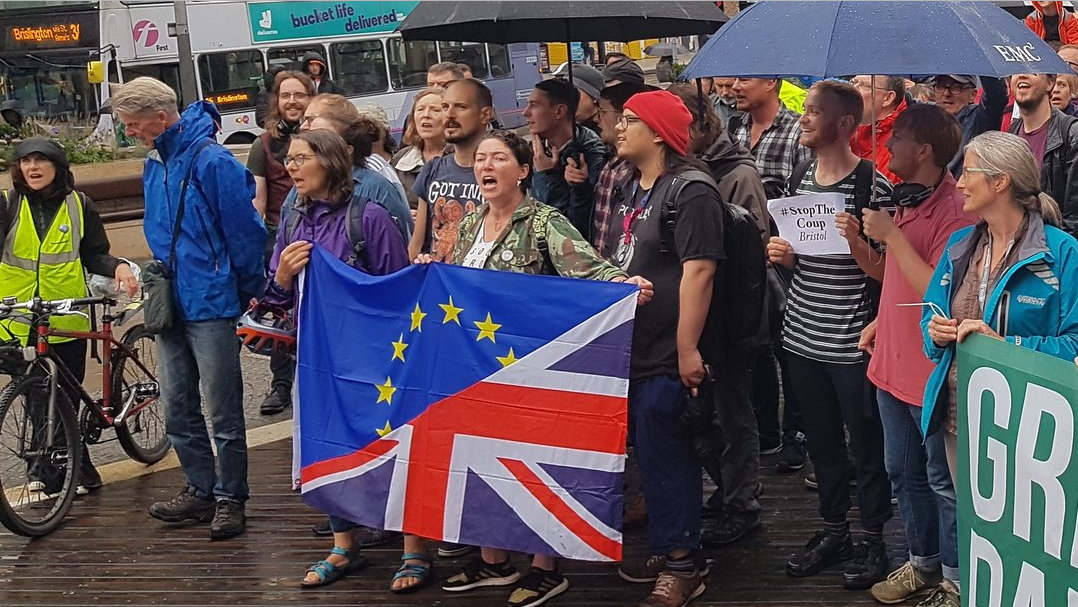 Protesters gathered in the centre of Bristol on Wednesday evening to protest what they saw as a “coup” by Boris Johnson.

Parliament will be suspended just days after MPs return to Westminster in September, with the Queen’s Speech taking place after the suspension on October 14 to outline the prime minister’s “very exciting agenda”.

It means that the time MPs will have to pass any laws in an attempt to stop a no-deal Brexit on October 31 will be reduced.

Great short-notice turnout for #StopTheCoup demo in Bristol. We must defend democracy and let our MPs represent us! pic.twitter.com/0Y5TXPS9vm

Bristol East MP Kerry McCarthy joined the protest near the cascade steps. She said: “I totally agree with the speaker, John Bercow, that this is ‘a constitutional outrage’.

“Ours is a parliamentary democracy, which has been the model for many other parliaments around the world. It is our job as MPs to hold the executive to account. It’s what we were elected for, and what our constituents expect us to do.

“The country is in crisis, and Parliament should be sitting, from now until the end of October, at weekends if need be. The conference recess should be cancelled. When Parliament returns next week I shall be doing all I can to #StopTheCoup.”

Good to see ⁦⁦@KerryMP⁩ turn up for the impromptu #StopTheCoup demo in College Green #Bristol pic.twitter.com/RmDhjCLWfc

Bristol West MP Thangam Debbonaire said that it is “outrageous that the Prime Minister is attempting to shut the people’s elected representatives out of the process of leaving the European Union”.

She added: “It is particularly outrageous as he appears to be doing this in order to take the country out of the European Union with no agreement on the future relationship whatsoever. This is hugely damaging to jobs in the South West, damaging for the environment and very worrying for anyone living in the UK who is a citizen of one of the other 27 EU countries.”

To invest in our NHS, deal with violent crime and cut the cost of living we need a Queen’s Speech. pic.twitter.com/xux9WIFL8e

Darren Jones, MP for Bristol North West, said: “This is clearly an attempt to muzzle Parliament. It’s an affront to democracy and a complete disregard for our sovereign Parliament.

“My constituents didn’t elect me as their Member of Parliament to be a by-stander. They elected me to make sure their voice is heard.

“In our democracy, the executive can’t just close Parliament and I, along with my colleagues, will do everything we can to make that clear and to fight a no-deal Brexit.”

🗣: “The Prime Minister is attempting a right-wing coup which is an affront to our democracy.”@darrenpjones, the @SWLabourParty MP for #Bristol North West, has called @BorisJohnson’s request to suspend Parliament an “embarrassment”.

Bristol South MP Karin Smyth tweeted: “The PMs actions today are outrageous and cowardly but beyond the drama we’ve still to hear what Deal he actually wants.”

Writing on her website, South West MEP Molly Scott Cato said that the decision to prorogue Parliament “is the most audacious power grab our country has seen since 1642 and a fundamental assault on parliamentary sovereignty”.

She said: “It is now clear what Take Back Control meant: a constitutional coup by a dishonest and self-serving elite, hellbent on forcing through a damaging crash-out Brexit. There is no parliamentary mandate for this and it goes against the will of the majority of British people.

Scott Cato added: “Now is the time for all of us to stand up for the democratic rights that were hard won through sacrifice and struggle.

“We must defend our representatives and support them in their work across parliament to defend our democracy.”

He said: “I am dismayed and angered that Government has moved to shut down Parliament in order to push through its Brexit plans – potentially taking us into a No Deal future. Bristolians are represented in Parliament by four MPs who have now had their voices, and by extension our voices, silenced…

“It is a false promise that 31 October will draw this to a close. If we leave with a No Deal we will face the costly and all-consuming task of rebuilding an architecture to cover trade, migration, defense and alliances, and, of course, how to protect peace in Northern Ireland.

“What we really need is for the Brexit debate to leave Westminster and come to the cities, putting local government at the forefront of planning. In the coming days, I will be further working together with other party leaders from Bristol.”