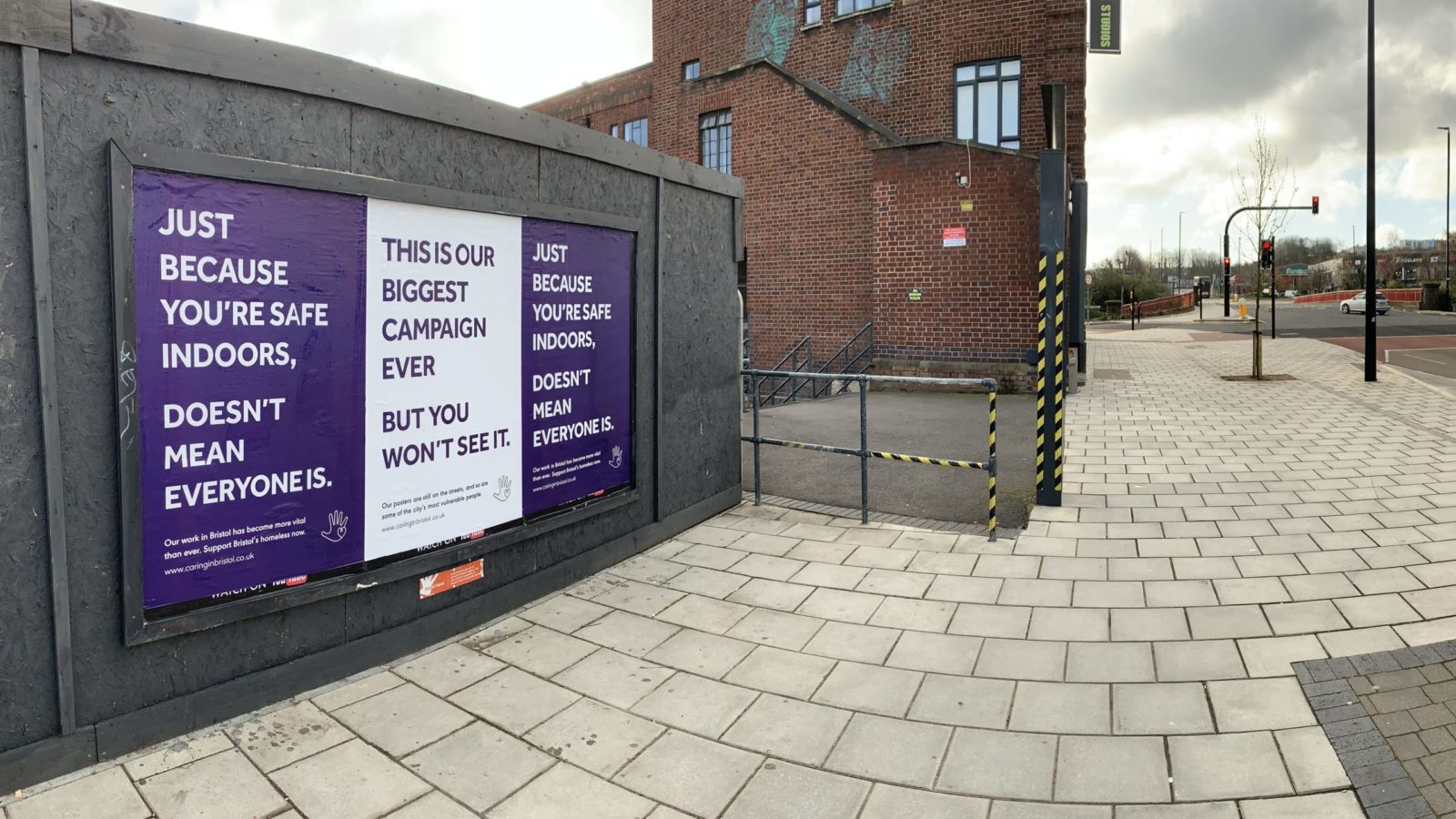 Impacts of the current international health crisis are being felt across the globe, but for some people staying at home isn’t an option.

Caring in Bristol has launched a unique citywide campaign to highlight the plight of those who are experiencing homelessness during these challenging times and ask for public support in helping them off the streets and into safe accommodation.

Posters plastered on advertising boards drive home the message for what the charity is calling its biggest advertising campaign yet – but it won’t be seen by many.

Caring in Bristol wants to spread the word that those who can should stay indoors to limit the spread of the virus while also appealing for help in supporting those in need.

Antonia Cross, campaigns and communications manager at Caring in Bristol, explains: “This national – and global – health crisis is having a huge impact on all of us. We’re all being told to stay at home – but for some, that’s just not possible.

“That’s why our new campaign aims to highlight both the need to stay put while also raising awareness for those who can’t. We’re asking the public to help us as much as they can, so that we can get as many people off the streets and into the hotel accommodation that the council has promised it will arrange as soon as possible.

“We’ve also had lots of messages from concerned supporters and volunteers asking if we have stopped our services and closed our doors, and we wanted this campaign to highlight that we are still here and working hard to support our clients”.

The advertising space for 106 posters on walls, fences and hoardings across the city has been provided for free by promotion designers Out of Hand.

The campaign comes in the wake of the latest figures that show the number of rough sleepers in Bristol has reached its highest level in a decade, despite there being a national drop.

In autumn 2019, there were an estimated 98 people sleeping on the streets of Bristol, up from 82 the previous year. This was also the highest number recorded since the count began in 2010, when eight people were found to be homeless.

Caring in Bristol has just launched its biggest campaign across the city… but you probably won’t see it.

We’ve covered Bristol’s streets with posters because as long as our vulnerable clients are still there, we’ll be there too. #Bristol pic.twitter.com/siPuS2wnKC

“Like all small local charities working with homeless people, we are under immense pressure to protect and serve those we care for now more than ever”, said Ben Richardson, the charity’s director.

“We’re currently seeking to house all homeless people regardless of their immigration status into temporary accommodation, including people with no recourse to public funds. Provision for those who are homeless during this crisis needs urgent national-level intervention. And this crisis is making the already vulnerable more exposed than ever.”

Bristol City Council has put out a call asking hotels, Airbnb owners and accommodation providers to help with providing 450 rooms needed to house people across the city who are homeless.

The Government has since told all councils in England to house rough sleepers, although without providing any additional funding to support this.

Speaking about why Out of Hand wanted to support the Caring in Bristol campaign, commercial director Nigel Muntz said: “During this hugely difficult time for everyone, Out of Hand are pleased to be able to donate our outdoor poster sites to support this latest campaign to highlight the vital role Caring in Bristol undertakes within the city, helping the most vulnerable who don’t have a home to go to.” 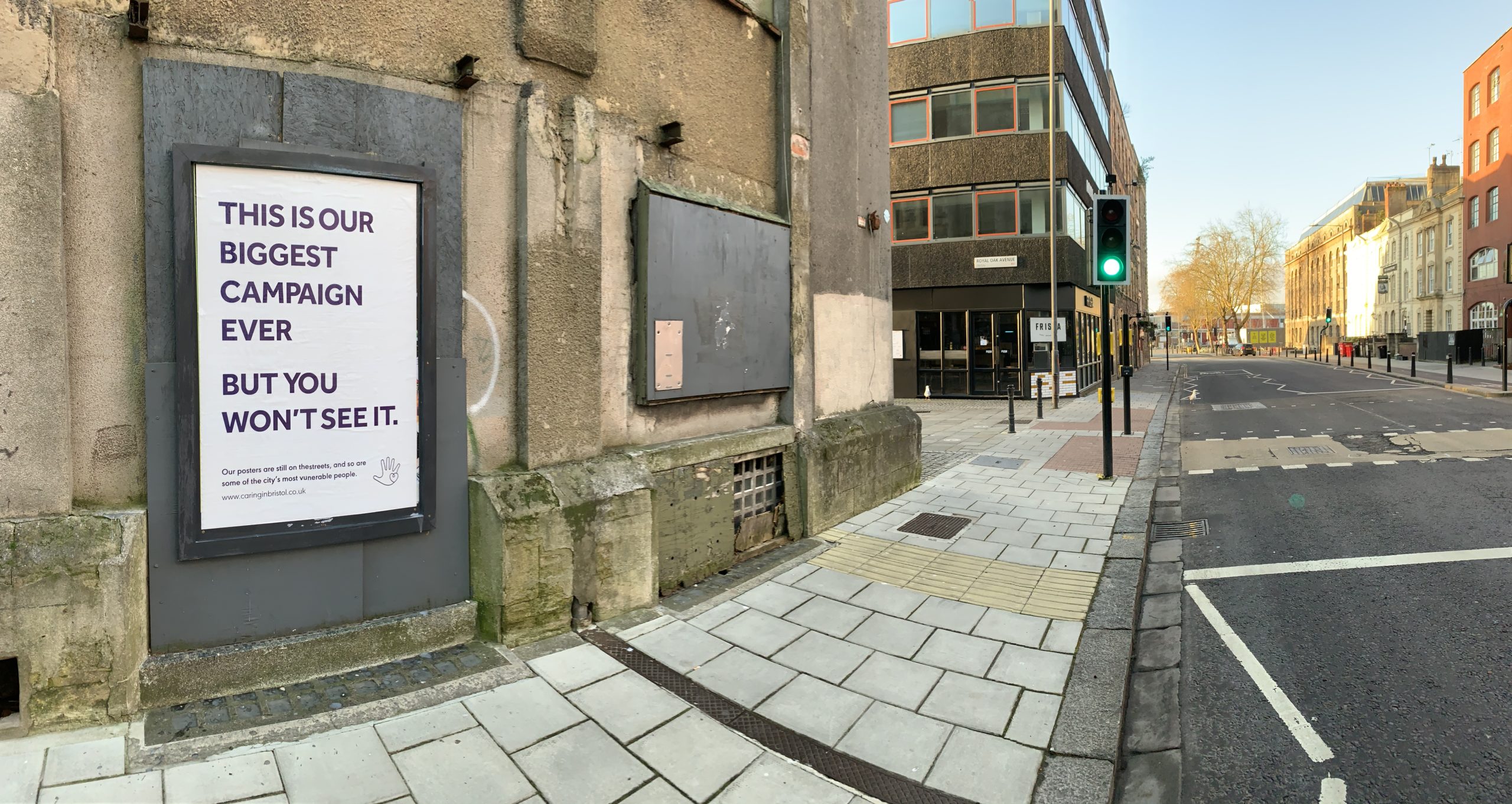 Posters have been put up in locations across Bristol 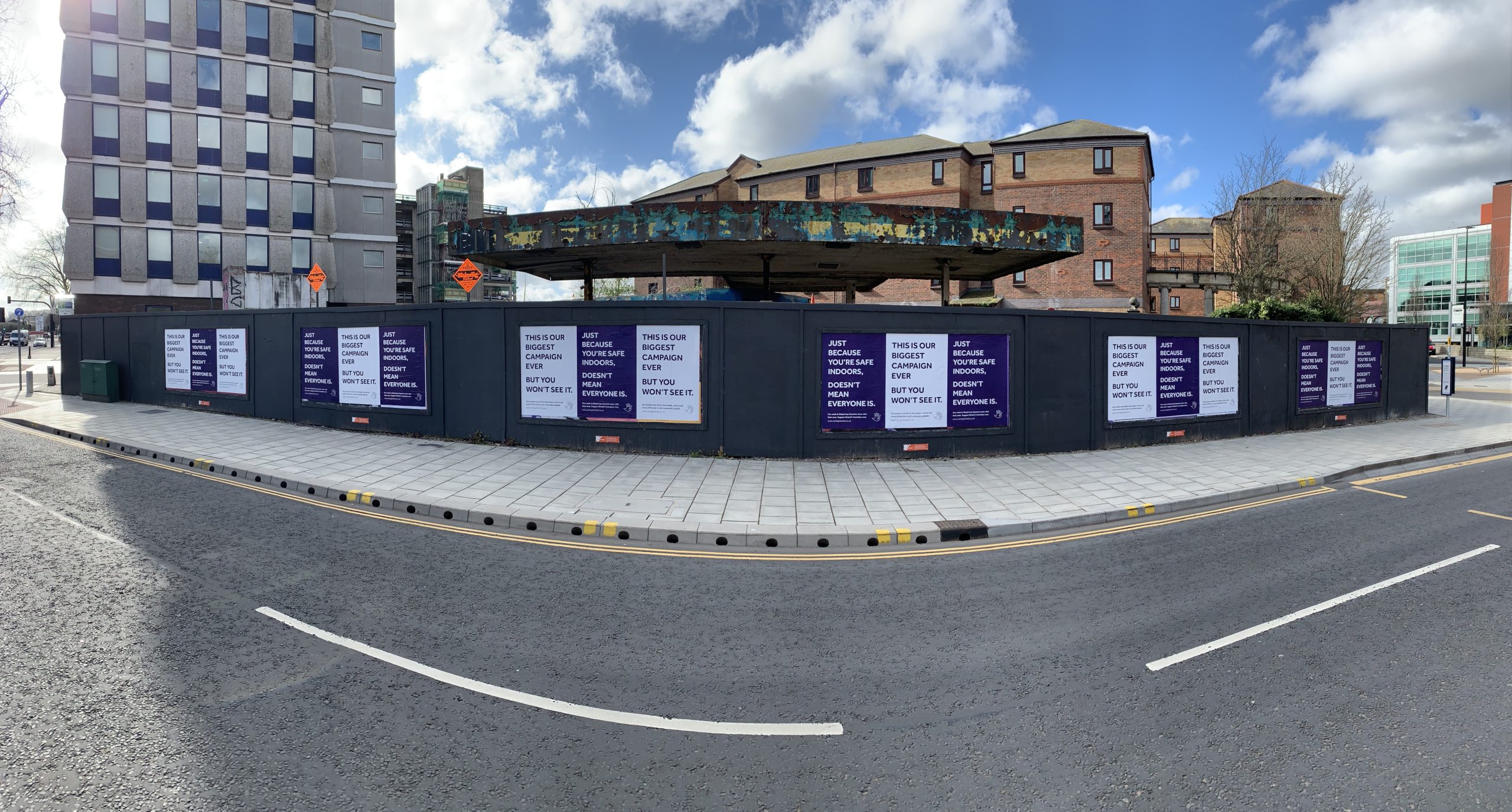 Caring in Bristol is urging all rough sleepers to make contact with the St Mungos outreach team on 0117 407 0330 to use the help that is available to them.

If a member of the public is aware of anyone that is sleeping rough, they are asked to contact StreetLink on 0300 5000914 or via www.streetlink.org.uk.

All photos courtesy of Caring in Bristol