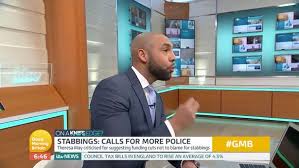 Bristol-born Good Morning Britain weatherman Alex Beresford called for changes to the environment children are raised in, shouting across the studio to give his opinion on the increase in knife crime across the UK.

Beresford argued that prevention of crime is better and more efficient than cure when John Apter, chairman of the Police Federation of England and Wales called for additional prisons to be built, increasing punishment to reduce crime.

Beresford reacted to his statement by shouting: “Prison doesn’t work though. It does not work.

“I’ve grown up in some of these communities you guys are talking about. Prison is not a deterrent. Some of these boys don’t fear prison.”

When Piers Morgan suggested that a two-pronged attack may be needed to reduce the number of people carrying “large killing devices”, Beresford responded with “Often you don’t catch them Piers. Avon and Somerset Police I know for a fact do knife sweeps.

“Often you get the innocent young black boy who gets stopped by police and gets frustrated. We’ve all seen them on social media.”

Beresford, who grew up in Eastville, is the weatherman for the show but breaking outside his role gained a positive response on social media, with one Twitter user saying “Great to see Alex back & his contribution to the discussion. He should be on here more often & not just presenting the weather.”

The 38-year-old later explained more about why he had to speak out and why he feels prison is not an effective deterrent:

Read more: Surrender knives to save lives in Bristol