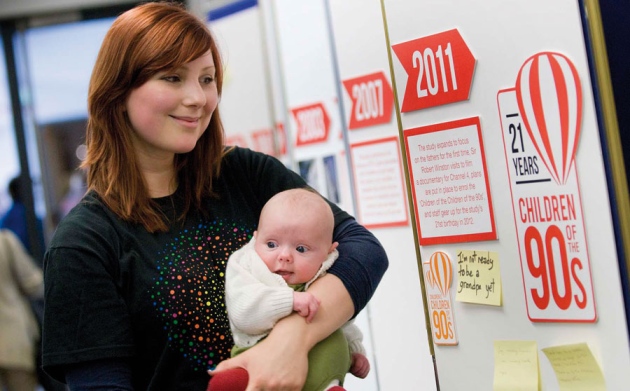 Since it was established in 1948, the NHS has become one of the nation’s most-loved institutions, playing a vital role in our lives.

As part of national 70th birthday celebrations, the Wills Memorial Building at the University of Bristol will join other buildings and historic monuments across the UK by being lit blue.

Here are just a few ways that Bristol research and teaching has helped to shape the NHS and improve people’s health:

1. Cutting cot death by 80 per cent
Twenty-six years ago, Professor Peter Fleming pioneered research which showed lives could be saved if babies were placed on their backs – and not their fronts – to sleep. It is estimated his research has saved the lives of more than 20,000 babies in the UK alone and has changed official advice about safer sleeping for babies the world over.

2. Cooling babies to save lives
Professor Marianne Thoresen’s research showed that cooling newborns who had been starved of oxygen during birth could reduce their risk of suffering brain damage. It led to a revolutionary treatment which has been provided by neonatal intensive care units across the UK since 2010 and saves 1,500 babies from death and disability each year.

3. Beating the UK’s biggest killer
In 1995, researchers in the Bristol Heart Institute introduced a new technique known as beating-heart surgery which revolutionised cardiac operations by allowing patients’ hearts to continue to beat during the procedure. Today, 75 per cent of all the heart bypass operations are carried out on the beating heart with a total of more than 8,500 cases completed since 1995.

4. What your poo tells you
The Bristol Stool Chart was created by Dr Ken Heaton from the University of Bristol and the BRI, and first published in the Scandinavian Journal of Gastroenterology in 1997. The diagnostic tool details seven different types of stool and is used to help identify gastrointestinal distress or food sensitivities.

5. Studying Bristol families to improve the health of future generations
For more than 25 years, the Children of the 90s study has been charting the lives of 14,5000 people born in the early 1990s in the greater Bristol area. Data from the most detailed study of its kind in the world has been used by more than 600 academics, leading to important discoveries that are helping treat and prevent ill health. For example, mothers who consume less fish during pregnancy have children with lower IQs, children brought up in very hygienic homes are more likely to develop asthma and toddlers who drink from a cup rather than a bottle are more likely to develop a healthy and varied diet. Its founder, Professor Jean Golding, has been named as one of seven research legends by the National Institute of Health Research to mark every decade of the NHS.

6. Bristol Medical School
Bristol had a medical school long before the current university received its Royal Charter in 1909. Founded in 1833, Bristol Medical School educated scholars from the city and beyond. In 1893, the Medical School was incorporated into what was, for a short time, University College, Bristol.  Medicine has been taught at Bristol on a continuous basis since the first medical school. It now comprises around 1,330 students and 900 staff, who through research and teaching improve the health of individuals and populations locally, nationally and internationally. More than 3,200 students have graduated in medicine over the last 15 years.

Looking to the future, the University of Bristol is working on dozens of research projects which could revolutionise healthcare:

7. Growing blood in a laboratory
The NIHR Blood and Transplant Research Unit has successfully grown red blood cells from adult stem cells. It’s being trialled in humans for the first time this year to assess the performance of laboratory-grown cells compared to donated red blood cells. This research has the potential to improve the health of people who need regular transfusions throughout their life for conditions such as thalassemia, sickle cell and certain cancers.

8. Creating the next generation of hip implants
Total hip replacements are one of medicine’s success stories – but they eventually wear out, and sometimes complications develop that require further surgery. Pioneering research in biomaterials at the University of Bristol could herald a new generation of biomimetic implants that could last a lifetime of use.

9. Engineering better health
Researchers are creating soft robotic clothing with artificial ‘muscles’ in its fabric to help disabled and older people move around easily and unaided. They’re also combining biology, robotics and bio-engineering to create human skin which will one day have potential applications for burns patients needing skin grafts. The futuristic-technique involves engineering human skin on artificial robotic muscles that can stretch and bend the tissue just like in the real world.