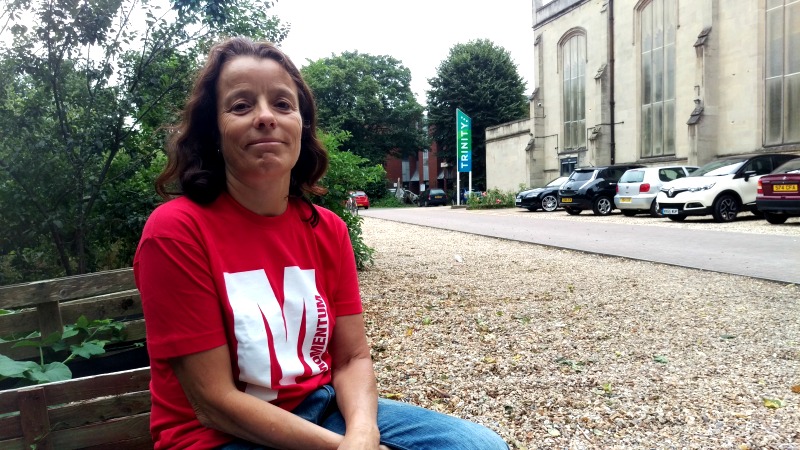 Bristol’s branch of Momentum, the grassroots organisation backing Jeremy Corbyn, is growing by “hundreds of members every week”, according to one of the organisers.

Speaking to Bristol24/7 ahead of a members’ meeting at Trinity Centre on Tuesday which she was chairing, Carol Billinghurst said the group had grown too big for previous venues as membership continues to swell ahead of the leadership election.

In an interview she also said the group was “disappointed” that Bristol’s Labour MPs who voted no confidence in Coryn would not get behind Momentum. She added that claims of bullying and abuse by Momentum members at local Labour Party meetings were an “exaggeration”.

Billinghurst, 55, a data analyst and mother of four from Cotham who has been a Labour Party member for a year, said the Bristol Momentum group had grown to about 3,500 members of a “whole range of ages”.

“There’s also a lot of young people or people who are organising in other areas, like to do with refugees, who maybe haven’t been to a big meeting, so in many ways it’s really different to the Labour Party because it’s quite organic,” she explained.

Asked if any support for Momentum was coming from the traditional strongholds where Labour support is waning, she said: “Maybe not as much. I’m not sure, I really don’t know. Certainly people have been leafleting down in Easton and Southville and there’s a lot of support down there.

“This is why it’s all exciting really and worth getting involved now because maybe we can make a change for all those people instead of them going to the far-right.”

She said the growth should encourage Bristol’s MPs towards Corybn, not turn them away from him.

“It’s really disappointing they can’t be excited and get behind the numbers. People are flocking to the Labour Party, and you’d hope they’d embrace that.”

Bristol West MP Thangam Debbonaire spoke out against alleged abuse earlier this month following a packed local party meeting where one long-serving Labour Party member said she was left in tears after being shouted down by people wearing Momentum t-shirts.

Billinghurst, who is also women’s officer for the Bristol West Labour Party, said she only heard the end of the meeting as she was in a separate room opened up to deal with the unexpectedly high numbers.

She said: “I think that people who’ve been involved for a long time are just very upset really. They’ve been having meetings where there are 10 or 20 people and it must feel like their party has been taken away a bit.

“But then on the other hand, they should be embracing the fact that we’ve got 300 members coming. It’s fantastic, more people to get out on the streets when we’ve got an election and so on. I think it’s hard for people so we have to argue sensibly and reasonably to try and pull them over.”

She admitted she did see a woman leaving the meeting in tears. She added: “She was the only person who was really upset and she was shouting and saying that there was bullying and stuff – and she was the scariest person I saw.

“Why would people want to bully people? A lot of the stories which seem to be coming out don’t seem to be based on fact. I think it’s really awful myself and I certainly personally don’t get involved.”

Asked if the alleged abuse was due to be discussed tonight’s meeting, she said: “I don’t know whether… I’m not sure. I wasn’t at the last meeting. Nobody’s behaving like that – nobody’s throwing bricks, you know. It’s just not happening.”

Pressed later in the interview on whether there was a mechanism in the local Momentum branch for dealing with alleged abuse or bullying, she replied: “I think it has people looking at Facebook and anyone who is monitoring that will remove them.

“I don’t really know. I just don’t take part in that and the majority of people don’t – it’s a lot of dirty tricks going on.”

Kerry McCarthy, top left, Karin Smyth, top middle, and Thangam Debbonaire, bottom, have all voted no confidence in Jeremy Corbyn and have all resigned from his shadow cabinet or shadow ministerial posts

Looking back on the alleged abuse at Debbonaire’s meeting, she said: “There really weren’t many people with Momentum t-shirts, there may have been one at the meeting. That is an exaggeration I know, that I could see.

“You always get people in any situation who are not well or whatever and they need to be dealt with. I have no idea what would happen.”

Since the meeting, Debbonaire, as well as Bristol East MP Kerry McCarthy and Bristol South MP Karin Smyth, has faced calls to resign or be deselected for defying the party’s leader.

Billinghurst said she holds no strong views on what should happen to the MPs if Corbyn wins the leadership election again.

“It’s really up to them. We’ll have to see if more people join the Labour Party and Momentum.

“It’s up to them to look and say actually why are these people coming back to Labour, and it’s to do with the policies of Jeremy Corbyn.

Asked for her response to claims that new members who back Corbyn were hijacking the party, she replied: “I think that people are attracted to the policies; like an end to austerity, saving the NHS, an end to nuclear deterrent, investment in housing and schools, fairness and equality in society – all of which are issues with which the Labour Party should be concerned.

“[New members are] also attracted by a politics of openness where people mean what they say and are fed up with spin.”