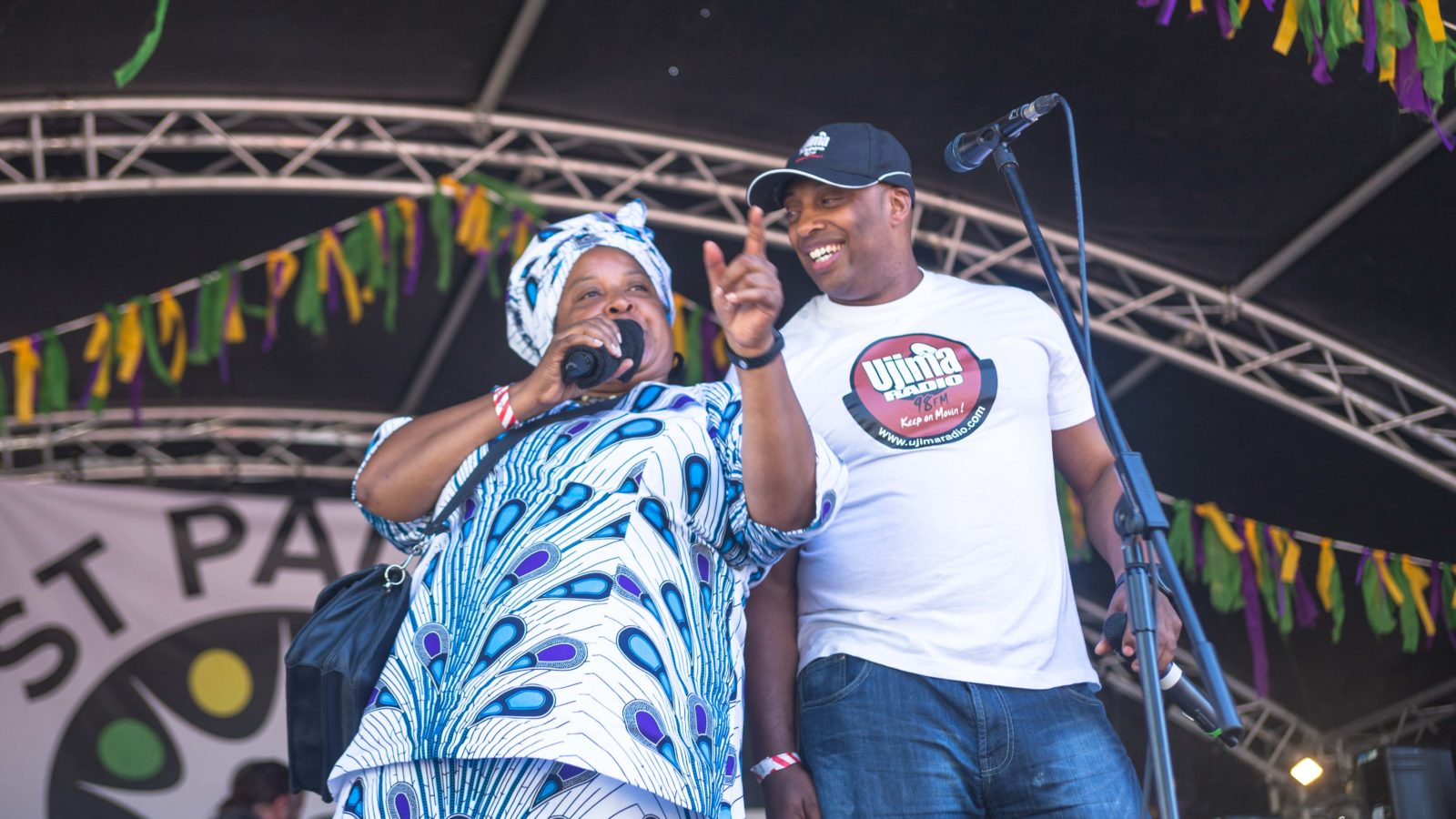 As the parade passed through Portland Square and up onto City Road in a vision of drumming and colour, the music was in full flow on Carnival’s four official music stages.

In the scorching heat of the afternoon sun, DJ Rogue was playing on the main Windrush stage on Grosvenor Road. “This is St Paul’s Carnival 2018! If you ain’t here to have fun and respect then you’re in the wrong place,” shouted vocalist Relly to whoops from the gathering crowd, before spitting lyrics over a complex track inlaid with soaring gospel.

Colourfully-dressed people in bikinis and flowing hareem pants danced in the sunshine, grateful for the occasional waft of a cool breeze that made the flags on the stage flutter. A kid at the front walked up to the barrier, dabbed grandly, and went back to stand with his mum.

Music played all day on the Windrush Stage, next to St Paul’s Learning Centre

“I played this at Shambala and I know you guys at St Paul’s can do better than that,” Relly said before the next track drops, a nod to old-school hip-hop that inspired a middle aged man in a bucket hat to spark up a massive spliff in front of the stage, handing it around to dancers who were lost in the music together.

As the set wound up, Relly took to the mic once more with a message: “People of Grenfell, we see you,” he said, getting the crowd to raise their arms to the heavens. “We salute everyone we’ve loved and lost, and we remember why we’re here. It’s 50 years of Carnival; we’re celebrating our independence.”

He left the stage and Welcome to Jamrock played to a roar of applause, bringing people out of the cool shade to let their hair down and flood the dance floor. Up-and-coming artist Stardog Global flitted amongst the crowd with a bunch of CDs, tapping people on the shoulder to offer them his wares. He’d come from Brixton to find a sympathetic crowd at Carnival; “I can send it straight to ya phone if ya haven’t got a CD playa!” he enthused.

The other main stage in Brunswick Square was full of people dancing to hammering drun’n’bass that was as relentless as the sunshine beating down. A little girl in a flowery sundress leaped about in the shadow of a huge fairground ride, which was spinning sickeningly high above, while a crowd clutching tinnies and wearing glittery bra tops cheered as the MC got on the mic: “We’re getting rowdy like we’ve won the World Cup!” he yelled.

Drummers played in a patch of shade on City Road, sitting on the pavement as a pair of bobbies on the beat walked past, sweating under their helmets. In St Paul’s Park, the teenagers all largely ignored the Unity Stage: just a backdrop to their usual Saturday afternoon spent socialising in the park, seeing who’s around and being seen. The ice cream van, though, was doing a roaring trade, and two girls took a selfie of themselves with their towering 99 Flakes.

In the park behind St Agnes Church, where former Carnival favourite DJ Derek had his funeral, kids licked bright blue ice lollies and swung on the play equipment to a fun soundtrack of Prince Fatty while their parents rested on picnic blankets in the shade.

This corner of St Paul’s Carnival was a safe haven for tiny ones escaping the madness of the packed streets: there were face painters and bubbles and good vibes and tiny children everywhere, and the organisers had deigned to turn the bass down a little to help the babies sleep. But only a little: it was still Carnival, after all.