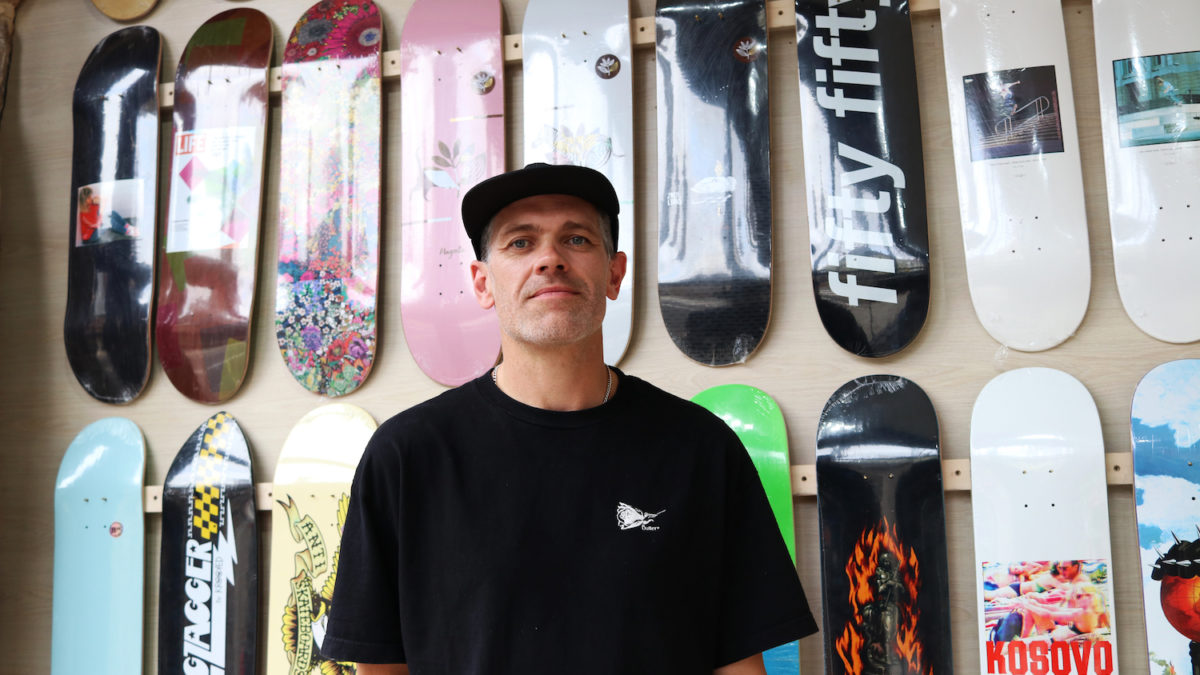 Situated amidst Colston Street is co-owner Justin (Syd) Sydenham’s freshly re-opened Fifty Fifty Skate Store. Entering the store is to sample an integral part of Bristol’s iconic skate culture: jazz and 90s hip-hop plays in the background, offering a level of familiarity harkening back to the days of 90s urban skate culture. Skate videos play silently on a flatscreen TV integrated into the stores window space.

To the right, Syd stands behind the counter. The essence of the golden era of skateboarding exists here, sewn into a new minimalist aesthetic of all-white, brick or wooden surfaces. 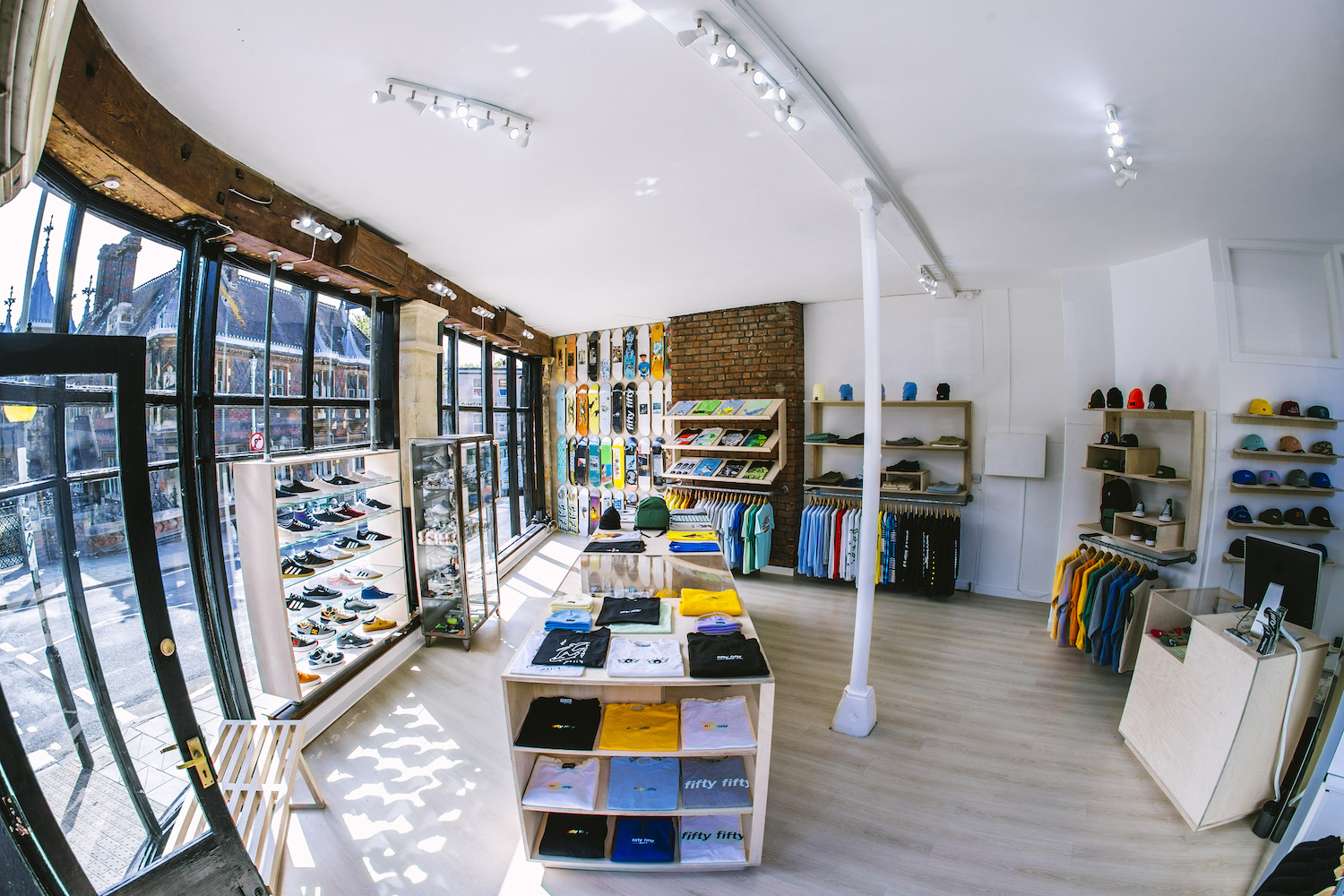 “We grew up skating Bristol and the surrounding areas,” Syd says. He and Fifty Fifty co-owner Danny Wainright, who now lives in Spain, grew up skating Stroud, Gloucestershire in the early 90s. With frequent day trips to Bristol, they soon became enveloped in the vibrant skate scene here. With world-renowned skate spots such as Lloyds amphitheatre and Dean Lane Skate park amongst many other iconic skate spots, the move from Stroud to Bristol became inevitable – with Danny making the first move.

“Danny moved here first and then me and my mate Hapgood would end up just driving here every day sleeping on his floor just to skate and yeah, we all moved here and then started the shop straight away pretty much.” Syd says looking out over the store thoughtfully. “there was never really like a central focal point shop-wise for the skate scene here which was always really strong.” So to target this gap in the market Syd and Danny created Fifty Fifty. “What started off as this half-baked idea in 1996 became a reality about a year later really.” 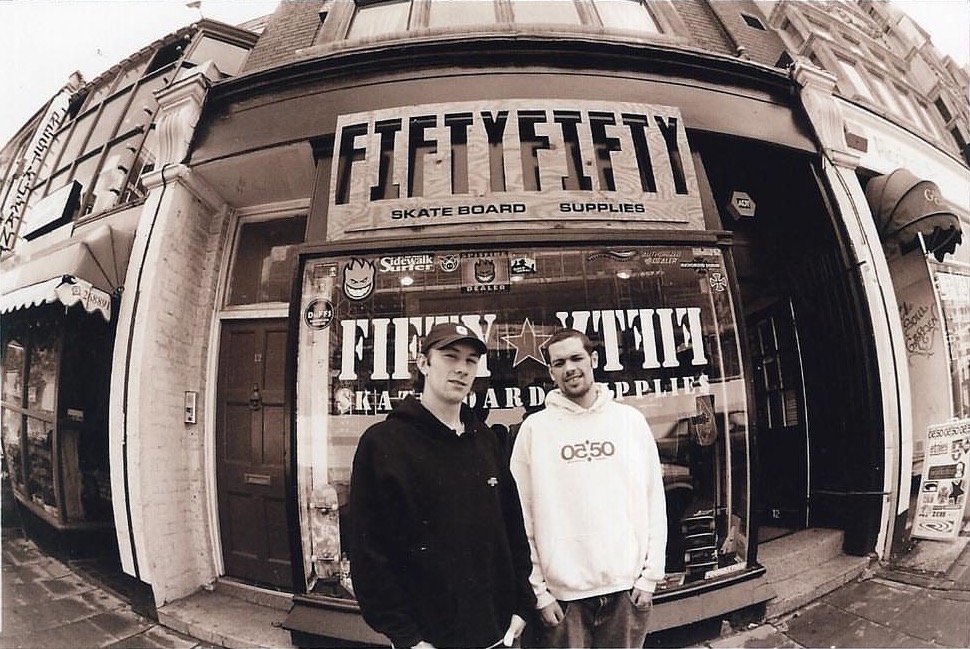 Syd and Danny outside the first fifty fifty store in 1997. Photo by Hacker Photography

Approaching its 21st year as the established heart of Bristol’s skate scene, these premises are Fifty Fifty’s fourth iteration, having first opened on Park Row, moving just a few doors down a year later, and then resettling on Park Street. “The very first shop we only had for a year right at the start,” Syd exclaims. “It was fucking tiny! Like we went in, it took six months to fit it, like everything was made out of coping – it was definitely one of the best ones.”

“The second shop on Park Row, the one with the mini ramp out the back, again it just got too small as we grew. We had two shops then as well: me and Danny have always been into shoes so one was a trainer store on the other side of Zero Degrees!” He gestures enthusiastically, pointing up the road. “I wish I had kept everything in that shop. It was full of Supreme and Banksy prints. It was fully ahead of the game. People barely knew what Supreme was back then but now all their products sell for crazy money.” 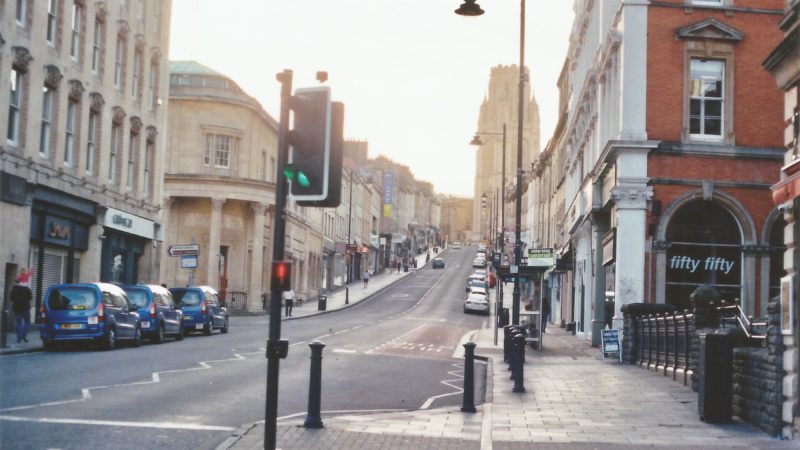 The third Fifty Fifty store at the foot of Park Street. Photo by Mikael Techane

The previous store of ten years lived at the foot of Park Street, acting as a convenient hub for skaters of Bristol next to another frequently skated Bristol spot, college green. However, the time became right for Fifty Fifty to continue on its legacy elsewhere. “We’d been looking to move from Park Street for a while. We wanted to get out for the last couple of years really, just because Park Street isn’t what it was when we moved there. There’s no independent stores nowadays, the business rates are mental and the council won’t budge on that.”Syd states, returning to a more thoughtful tone.

“Also, the way everyone shops now, half of our customers will shop online even in Bristol so we just didn’t need that space anymore. The process of moving has been really stressful to be fair, really tiring and draining, but now it’s open it feels like every minute of it has been worth it for sure. Everyone’s stoked on the new spot.”

The new store takes inspiration in its look and layout from skate shops that Danny and Syd have seen on their global travels. “We went for a very clean and basic approach with this store,  like the shape of this shop is a lot better – you can see everything instead of having things hidden round corners like the last store.” Syd says. “We’re really stoked on how it came out.” 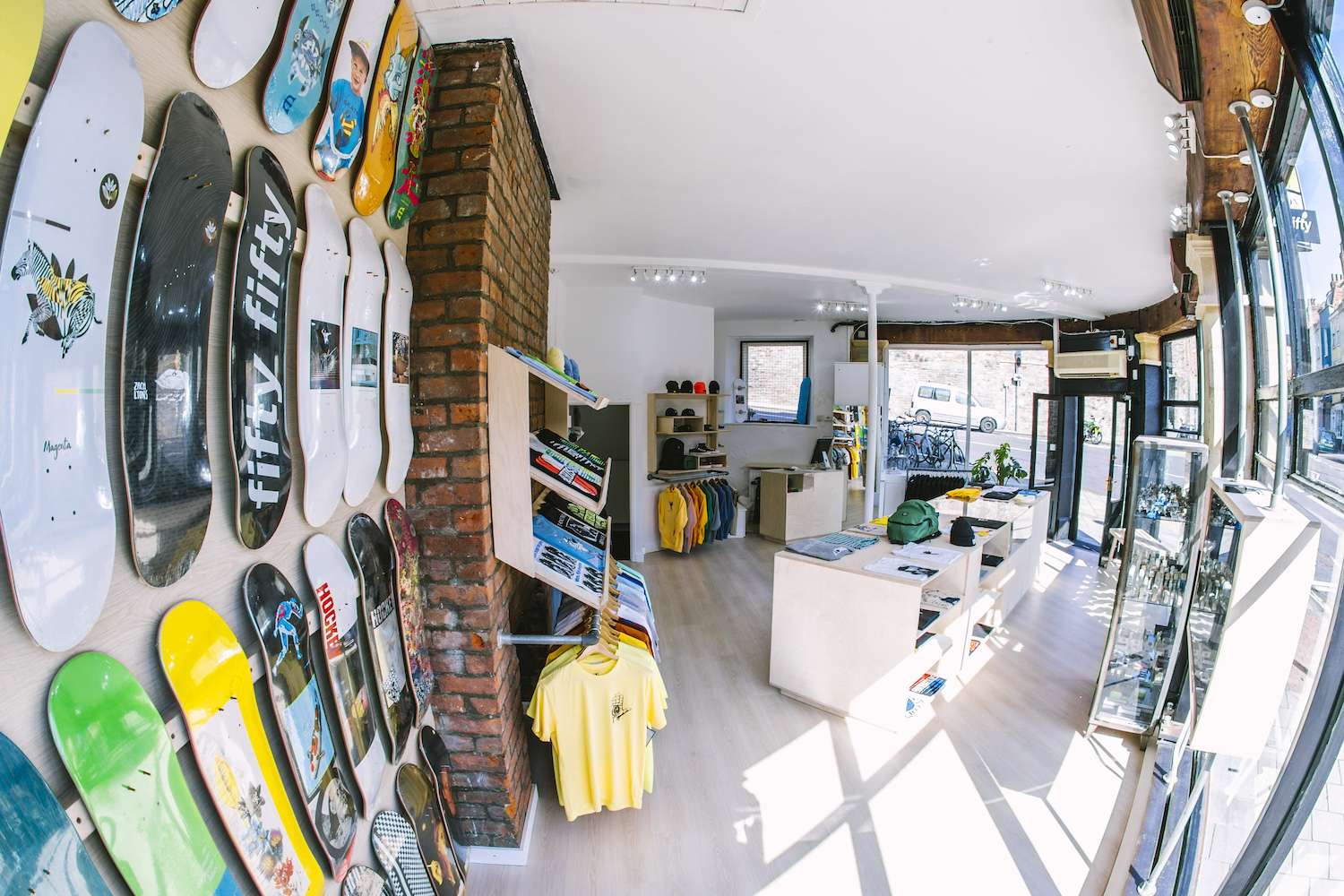 Another angle of the new stores open space layout. Photo by Hacker Photography.

The new shop maintains the brand’s integrity but also represents what is needed to survive the changing landscape of Bristol and the skate world in general. Fifty Fifty’s legacy is one of an underground movement hanging in the balance in the ever-growing commercialised world of skateboarding. Big brands such as Nike and Adidas have steadily grown their capital in skateboarding, with the additions of skate-specific apparel, shoes and skate teams – pulling money away from skater owned brands and into the pockets of corporations. Fifty Fifty’s incarnations, however, have constantly withstood the tests of time.

“Surviving 21 years this October actually is probably the biggest achievement for sure,” Syd says. “Collaborating with loads of really good brands like Vans and doing a shoe with them in honour of the shop’s first ten years was also really fun.” Syd says, breaking to greet some customers.

“Going forwards we want to keep Fifty growing and growing; we’re currently concentrating on our own brand quite a lot, really pushing it and getting that out there. We’re also going to keep supporting the local skate scene, do events and yeah: keep doing what we’re doing.” 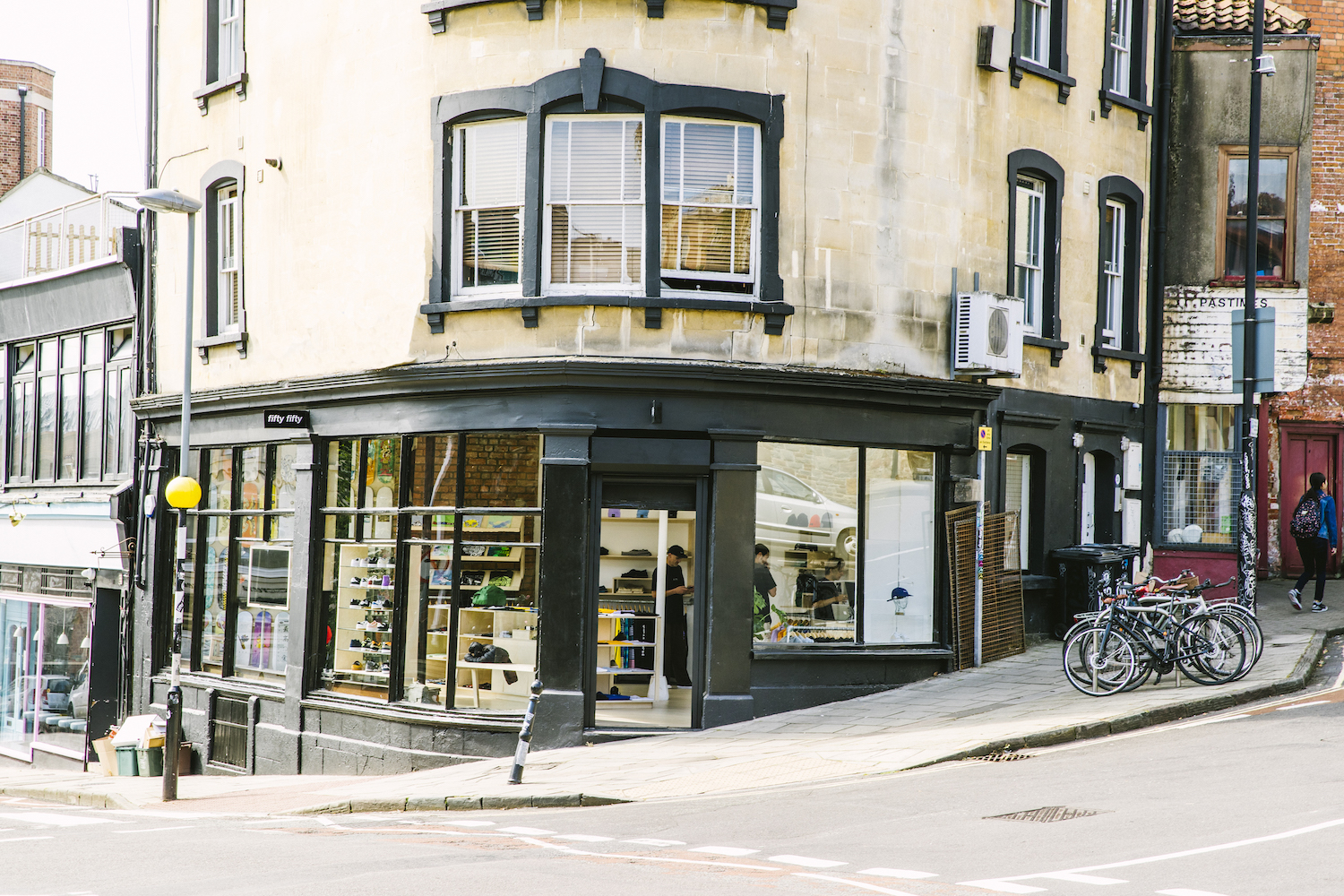