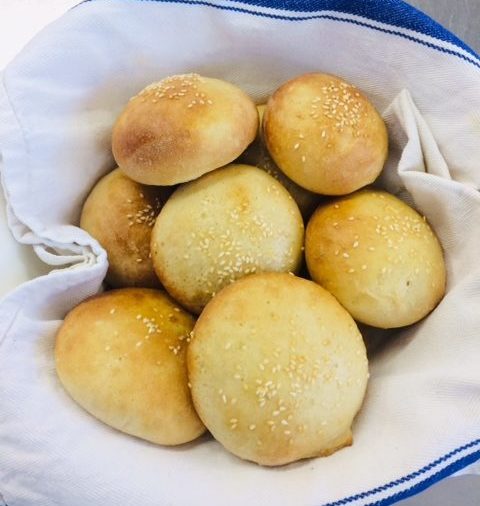 This week the young chefs have been busy cooking chilli and burgers (including veggie options). Young chefs Dylan and Chloe have both chosen the burger bun recipe as their recipe of the week because of their “fluffy” consistency. They were also surprised by the addition of milk and lard.

Sesame seeds, to sprinkle over

Weigh the flour, sugar, lard and salt into a large bowl and add the milk. Mix the yeast with the tepid water and mix thoroughly into a dough. Turn it out onto a lightly floured surface and knead for 10 minutes until your dough is soft and elastic. Leave to rise for 1 hour in a covered bowl left in a warm place.

Divide the dough into 10 pieces and on a lightly floured surface roll into balls with your hands. Then using a rolling pin flatten into 10cm baps on a floured surface. Place on baking trays lined with baking paper and brush beaten egg over each bap. Cover loosely with cling film and leave them in a warm place for 30 minutes.

Brush with a second coat of beaten egg and sprinkle a pinch of sesame seeds onto each bap. Cover loosely with cling film and leave for a final 30 minutes to rise.