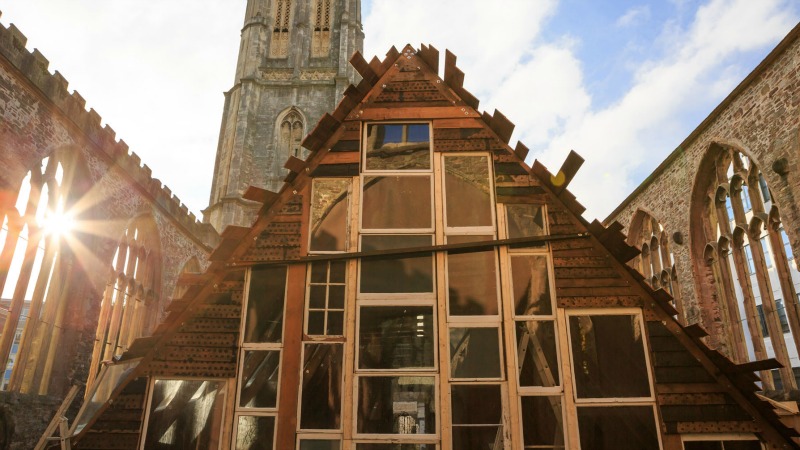 Oct 29-Nov 21, Temple Church
576 hours of continuous performance in Bristol’s famous bombed-out church? This project, the brainchild of US artist Theaster Gates and facilitated by Bristol art programmers Situations, showcased our city at its experimental, enabling and genre-straddling best. A vastly eclectic, oft-absorbing programme of spoken word, live music, theatre and very much more, 24/7, across 24 days and featuring more than 500 local artists. Shall we ever see its like again?
Read our account of spending 24 hours experiencing Sanctum

Queen Square, Sept 14-15
Described by our reviewer as “a psychedelic space opera” and “an intense, collective hallucination,” this was the greatest disturbance in Queen Square since the Bristol Riots of 1831. Sets from Roni Size, Leftfield and Eats Everything soundtracked a shock-and-awe spectacle of pyrotechnics, robotics and aerial theatre.
Read the Bristol24/7 review

2015 was without question the year of event and outdoor cinema. Bristol Bad Film Club offshoot Bristol Sunset Cinema brought The Princess Bride (above) to Blaise Castle and Flash Gordon to the Clifton Observatory. Movies’ n’ nosh specialists Cannoli & Gun launched a string of sell-out events in restaurants. And for the more artily inclined, the Floating Cinema sailed serenely into the city docks for a week-long residency.

5. The Other Art Fair

Arnolfini, Throughout June
The popular art fair ventured outside the capital for the first time this year, and chose Bristol for its first provincial instalment. Tracey Emin, Gavin Turk and -formerly Bristol-based, now world-renowned street artist – Sickboy were among the guest artists. We also loved the children’s crafting haven, The House of Fairy Tales.
Read our interview with Tracey Emin