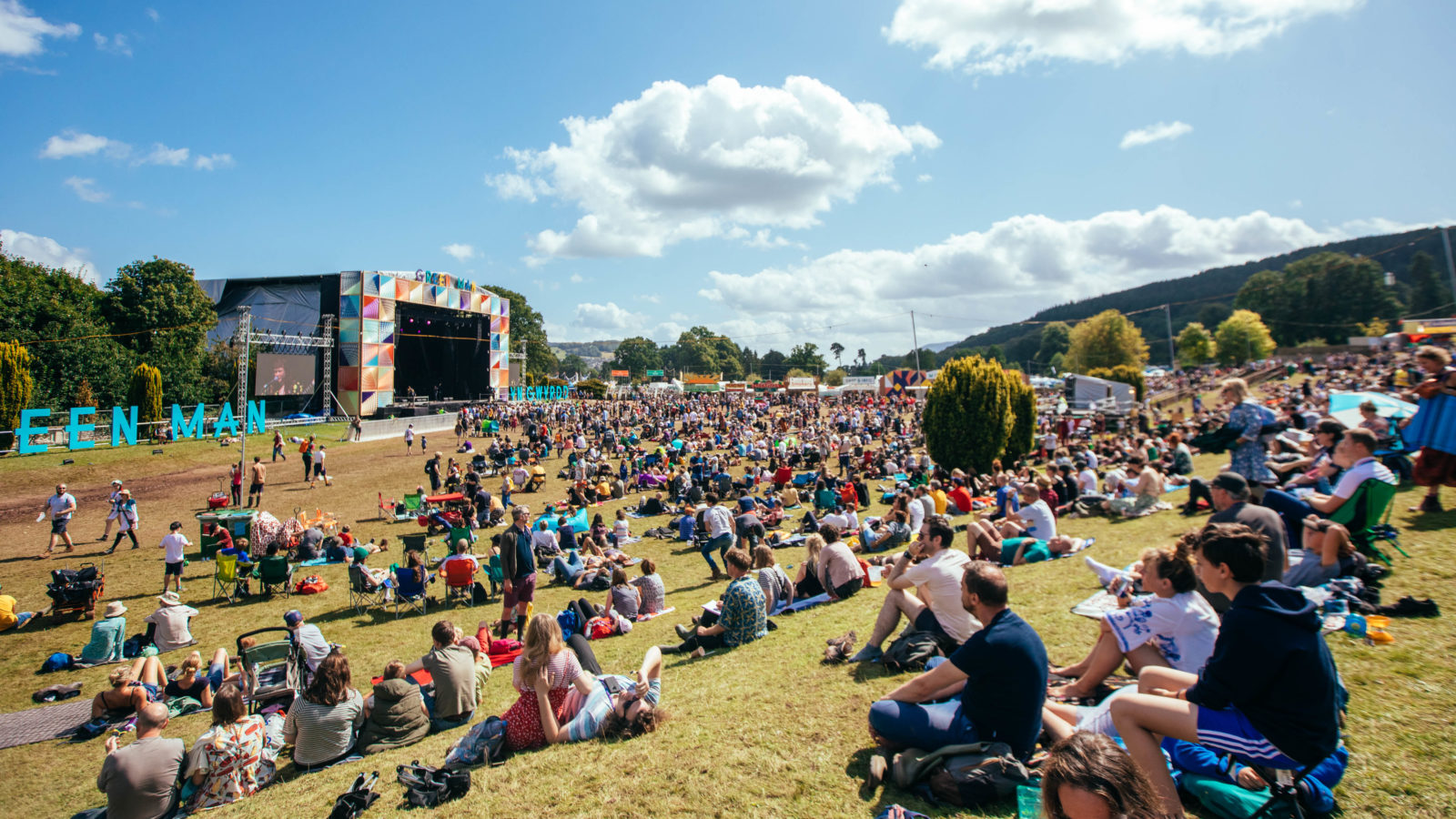 Going to Green Man Festival is an ethereal experience. Despite arriving to relentless rain on Friday morning, magic escapes from every facet of Glanusk Estate in the Breacon Beacons, where the festival is held.

Surrounded by looming mountains shrouded in dark clouds, Friday was a great chance to enjoy some of the literature talks, in between darting from live music, visiting the onsite cinema and taking part in workshops.

Luke Turner & Gazelle Twin, who performed earlier this year at The Exchange in Bristol, spoke at Babbling Tongues, the literature tent, followed by packed out talks from Ian Williams on the female Doctor Who and from Caitlin Moran. 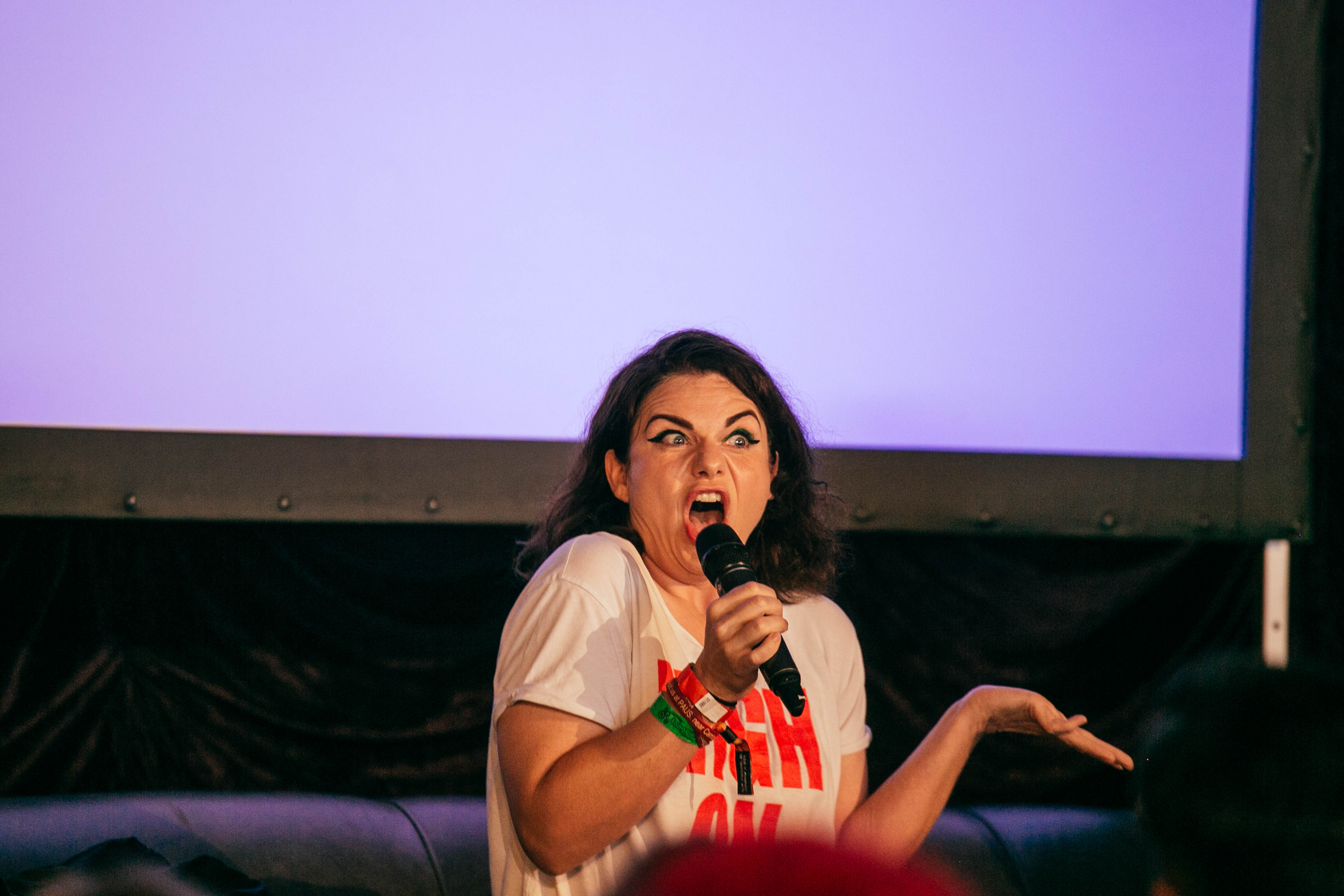 From early evening beckoned with a rain-soaked performance at the Mountain stage from Julia Jacklin and the Fat White Family, to stunning sets under to cover of the Far Out stage from Pigs x7, Maria Hackman and Gwenno.

As the night crawled in, there were sets from local and national comedians at Babbling Talks, and DJ sets from Diplomats of Sound and Heavenly Records at Chai Wallahs, offering much needed respite from the rain. 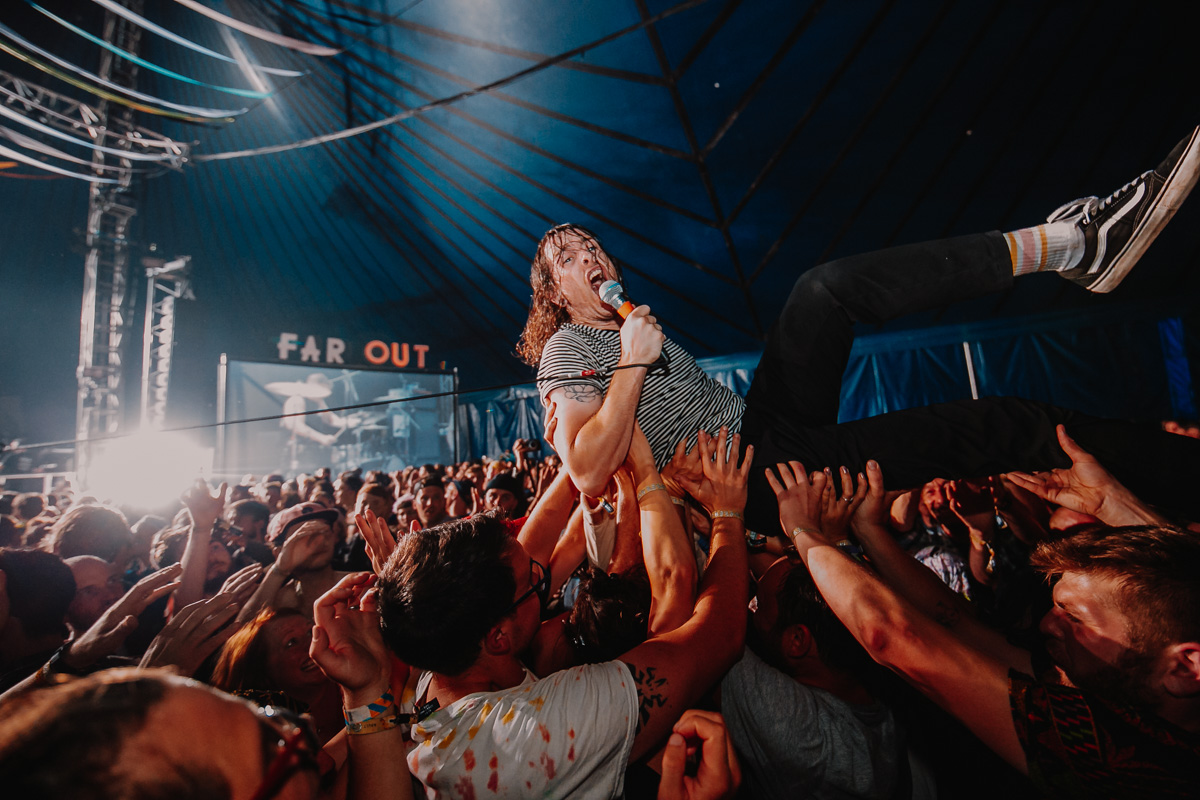 IDLES played the Far Our stage, photo by Nici Eberl

The stand out day, however, was Saturday. With the sun shining, there was the luxury of meandering from area to area without a care in the world (or a rain coat).

Ghibliotheque podcast did a live recording following a showing of Kiki’s Delivery Service, Jarvis Cocker spoke on his new book (and later gave a surprise performance) and Porridge Radio gave a stellar set on the Rising stage, a stage tucked next to winding streams and low hanging trees giving a performance space to up-and-coming talent. 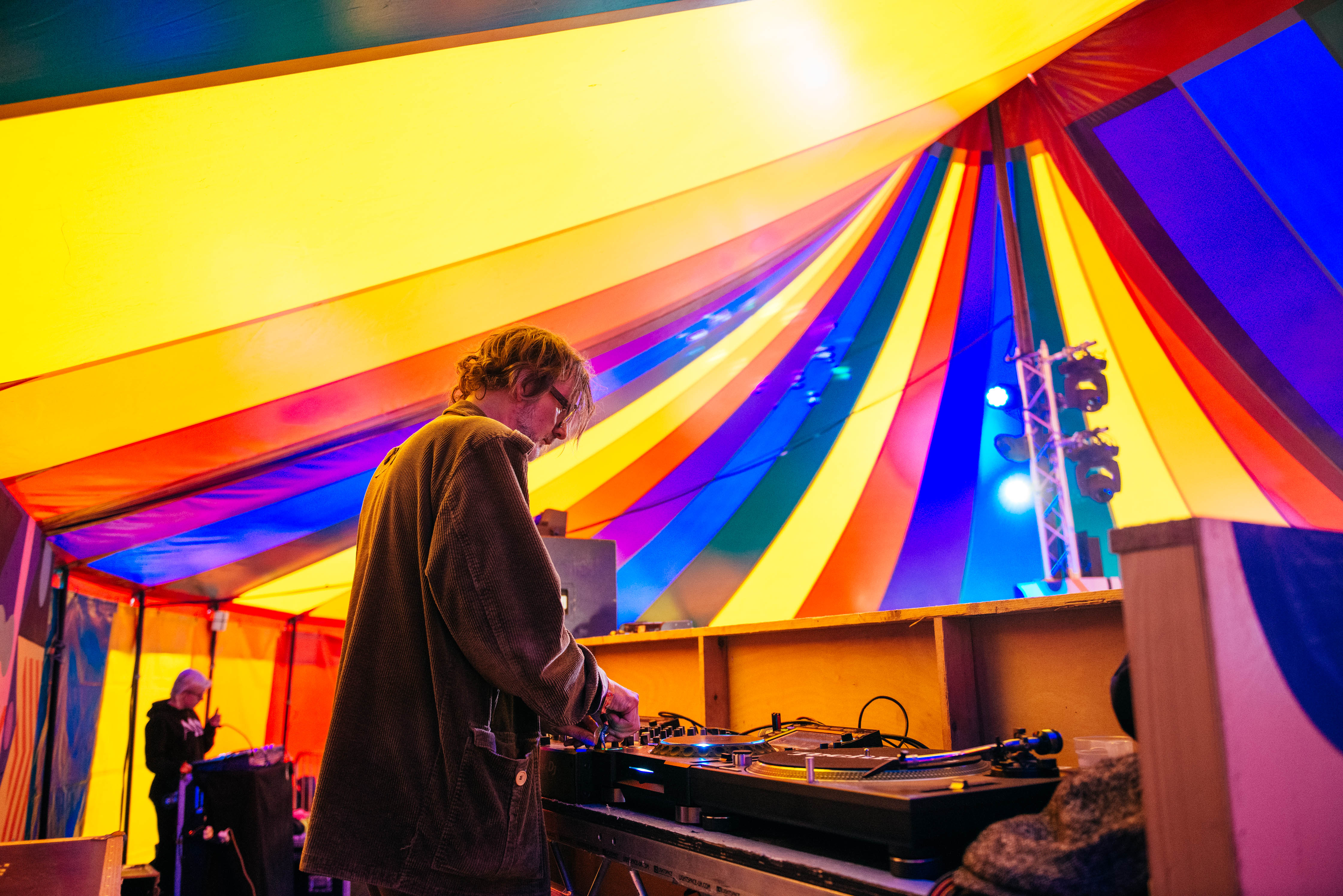 Jarvis Cocker played a surprise set at Round The Twist, photo by Patrick Gunning

A highlight of the festival was a proposal to Jules, the lead singer of The Big Moon, on Saturday afternoon. With a performance bringing out all the band’s best work and new song It’s Easy Then, it was already a show to never forget.

When Max proposed to the her surrounded by festival posties (who deliver letters from one festival-goer from another), the crowd erupted.

The week after we became a band jules went to a festival. We were chatting about it in the studio when she got back and she told us she’d met this amazing guy and had a completely ridiculous whirlwind weekend but he lived in Holland so nothing would ever come from it. 5 years, hours of megabus trips and an album full of love songs later this happened today. Jules and Max we love you SO MUCH!!!! You are two amazing people who spread so much joy wherever you go. Can’t wait for everything to come! GAHHHHH!! HOORAY FOR LOVE!!!❤️❤️❤️❤️❤️❤️

Jules and her fiancée had met at Green Man five years prior and the love felt by the two spilt over to the crowd, making the festival glow even brighter with love and kindness.

The 17th annual Green Man festival finished in spectacular style, as always, with the burning of the effigy. 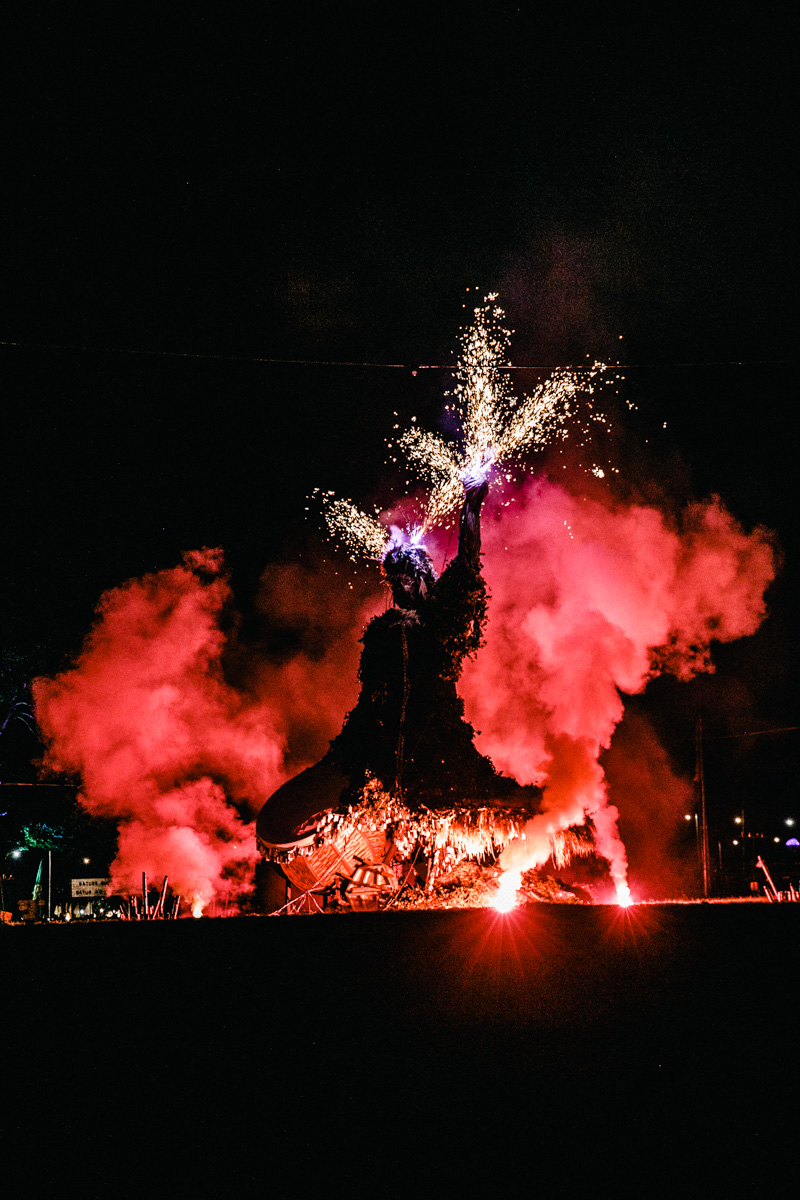 The ever-impressive burning of the green man effigy, photo by Nici Eberl

As ever, 2019’s festival delivered a friendly light in a dark world, with its message of kindness and compassion being something very much needed in increasingly divided times.

Find out more at www.greenman.net