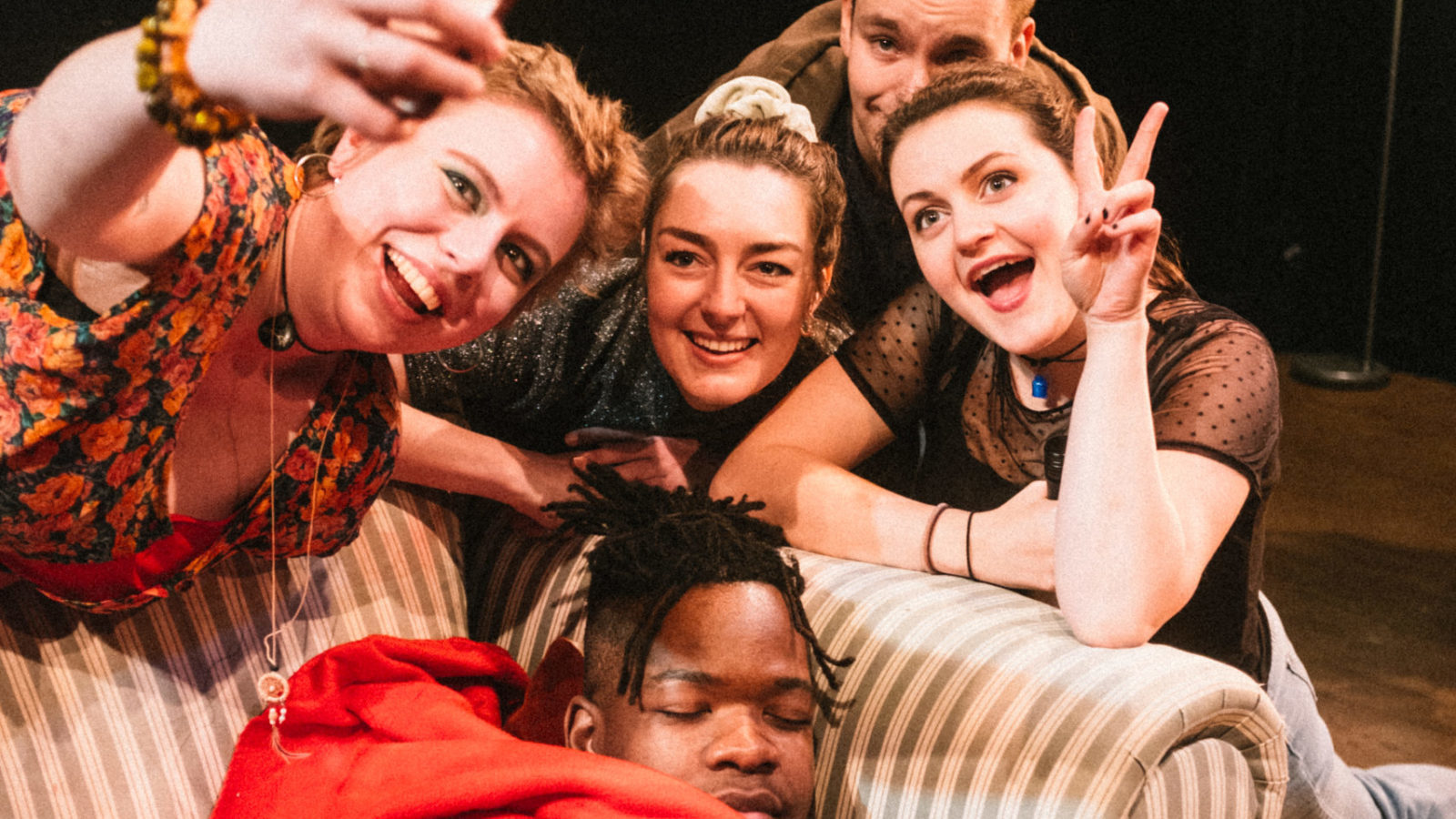 “If you go down to the woods today…”

Audiences for this co-production by Apricity Theatre, Black Dog Productions and Dumb Blonde Theatre certainly are in for a big surprise.

Quite a few of them, in fact, mostly stacked together at the play’s startlingly visceral end. Interestingly, the humour that has been baked from the start into what would otherwise simply be a tense, dark thriller means that audiences are laughing as hard as they are gasping come curtain-up time.

The nicely-chosen and well-fleshed-out premise is ripe for both horror and comedy. Six friends – no, scratch that: six young people linked by chains of friendship but also split by some increasingly visible faultlines – gather for a holiday together in a remote log cabin in Germany’s vast, folklore-rich Black Forest.

Over the course of the next two hours (with interval), the atmosphere escalates from a laid-back mates’ break, all late nights and bracing hikes, to a dense network of paranoia, fear, long-buried childhood trauma and repressed, then violently expressed passions. 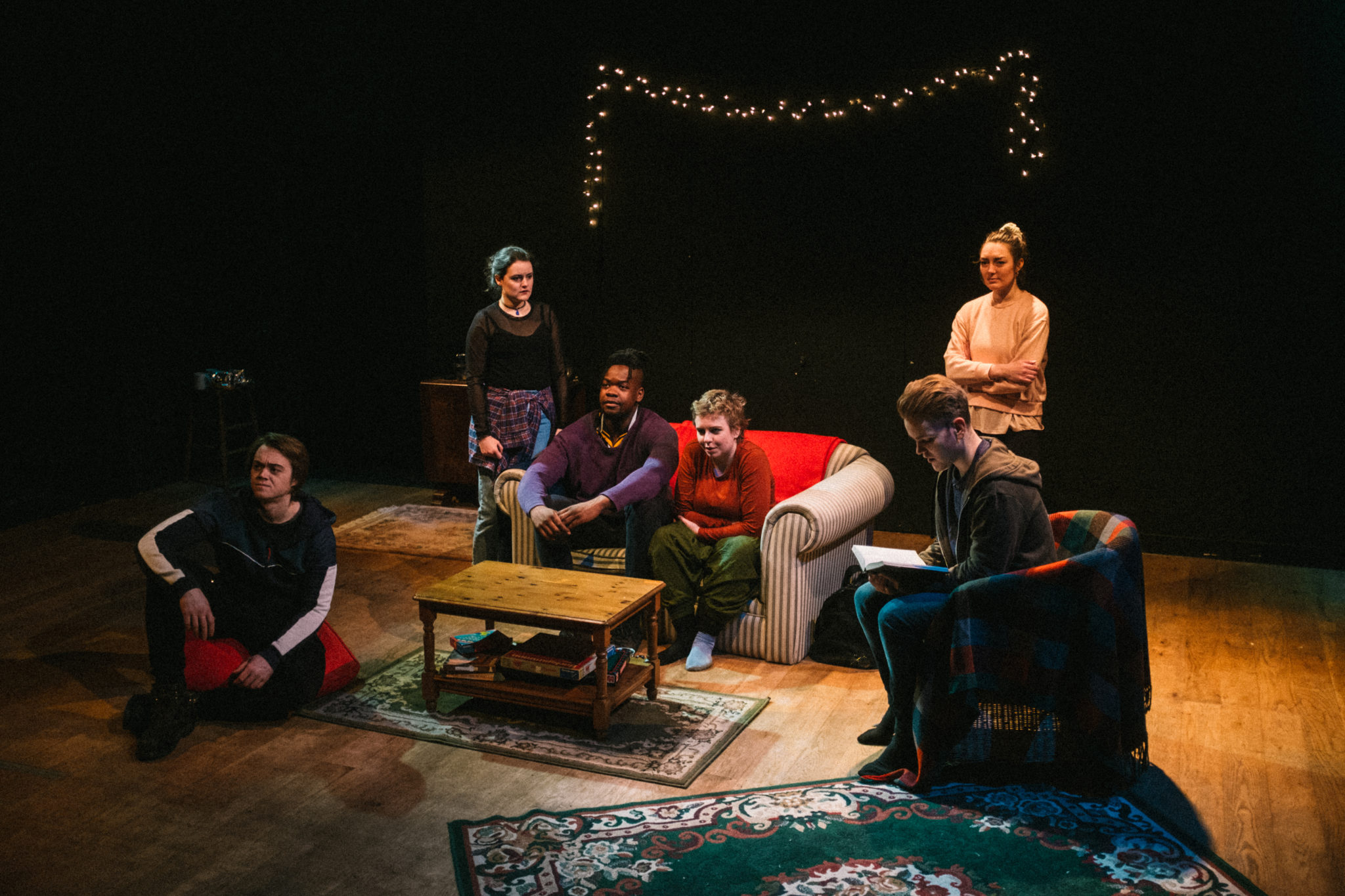 All of this against the backdrop of the Black Forest’s rich, often dark and bloodthirsty folklore, and one particular malevolent entity in particular, who – some, crucially not all, of the party grow convinced – is spreading its murderous clutches right inside the holiday home.

Just how much of the ensuing implosion and violence is down to this Black Forest bogeyman, and how much down to the network of jealousy, resentment, fear and unrequited love within the group? This nice ambiguity is There’s Nothing There’s calling card.

The choice of setting complements the Alma Tavern Theatre’s black-box sparseness perfectly: the fact that the characters can only move (in increasing states of desperation) in and out of this single space heightens the sense of claustrophobia, of being marooned together somewhere small, remote and impossible to escape from.

The performances range from solid to nicely watchable. Two of the standouts are the two characters who bring most unease from the start: Emily Malloy is Alina, who has a strong tendency towards the mystical and esoteric and who, we learn, has her own reasons for being in this particular place; and Stan Elliott is Caleb, intense, introverted, something of a loner, only invited as brother of the popular Grace (Charlotte Turner-McMullan) and driven by passions as strong as anything from the German folklore omnibus.

There’s comedy, too (as there needs to be), and in fact the piece is nicely nuanced in its balance of light and darkness, the latter’s slow takeover of the former intricately and satisfyingly plotted. Many of the laughs come from Njeko Katebe as Ethan – amiable, hedonistic, laid-back, and delightfully bumbling in his romantic pursuit of one of his cabin-mates.

The dialogue is mostly functional, rather than whip-crack smart, but it conveys well enough the dynamics of these six young people, circling around each other increasingly uncomfortably in this confined space. There’s as much darkness in the play as there is in the endless silent German night outside the log cabin. Even the humour is black. And the journey from get-away-from-it-all hedonism to psychological and, very possibly, all-too-real nightmare is consistently well mapped out.

A show that ticks both ‘horror’ and ‘comedy’ boxes capably. Congrats (sorry, Herzliche Glückwünsche) to all involved. And the rest of us: choose your log cabins, and your log cabinmates, carefully.

There’s Nothing There was at the Alma Tavern Theatre on February 14 and 15. For more from Apricity, Black Dog and Dumb Blonde, visit apricitytheatreblog.wordpress.com, www.blackdogproductions.uk and www.facebook.com/pg/dumbblondetheatre