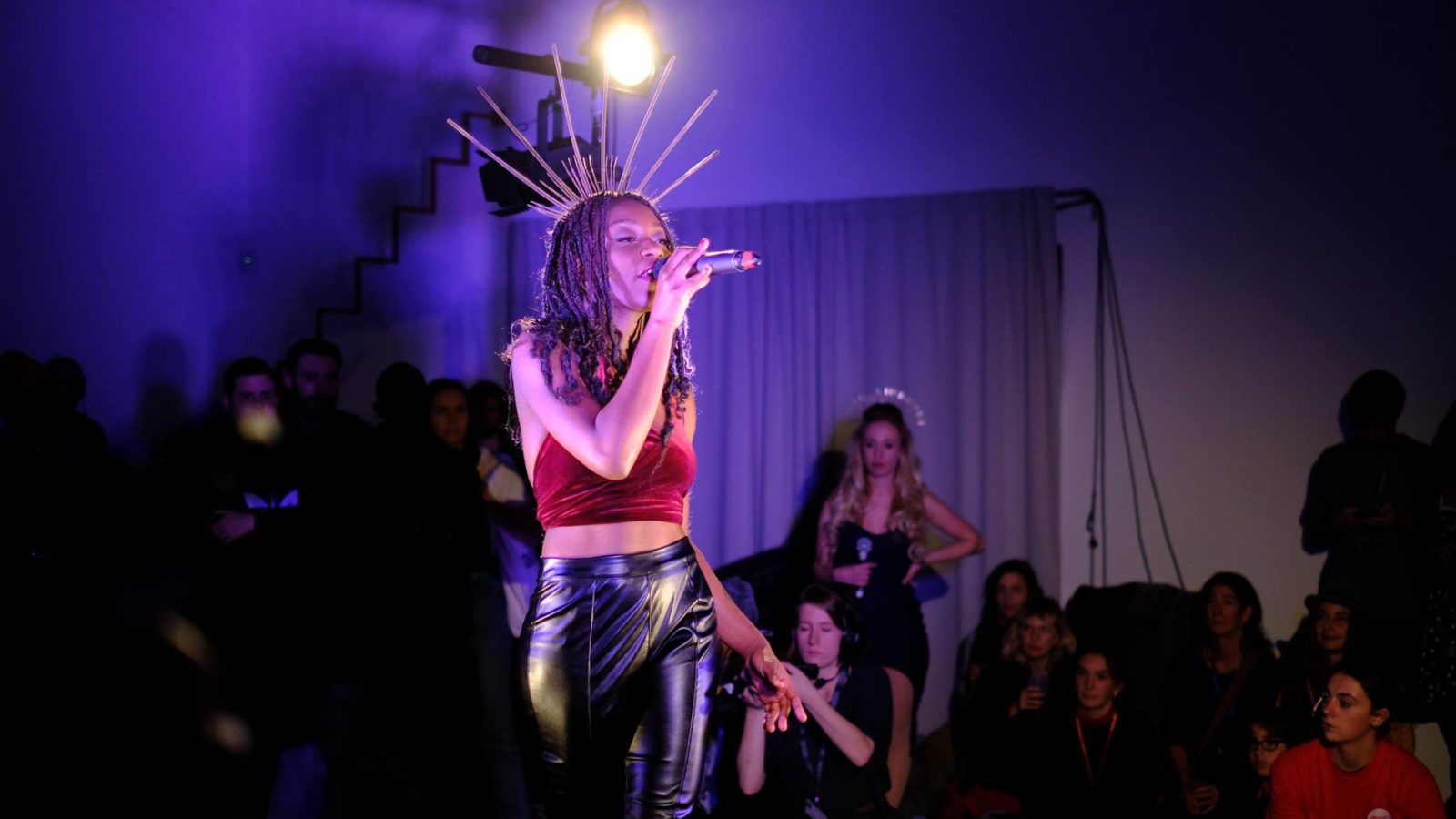 Deep music shakes the walls and floors of the Arnolfini ahead of the final sold out night of Creative Youth Network (CYN)’s ambitious promenade performance The Edge. After receiving a coloured lanyard, the audience – a diverse crowd that includes CYN’s chief executive Sandy Hore-Ruthven, proud mums and culture-hungry teenagers – is shepherded into groups by crew members wearing radio headsets and colour-coordinated caps. We gather on the staircase for it all to begin.

The concept of The Edge is simple. It’s the final of a new TV talent show, and there are four contestants left in the mix. Scott is a hot-tempered spoken word artist who is doing it for his daughter; Asha is a headstrong singer disillusioned with the reality fame machine; Lucy is a sweet, timid singer with substance abuse issues; Simonz is ostracised by his community for his sexuality and love of dance.

This evening we will discover who the winner is, though whether they are being chosen for their raw talent is another matter. 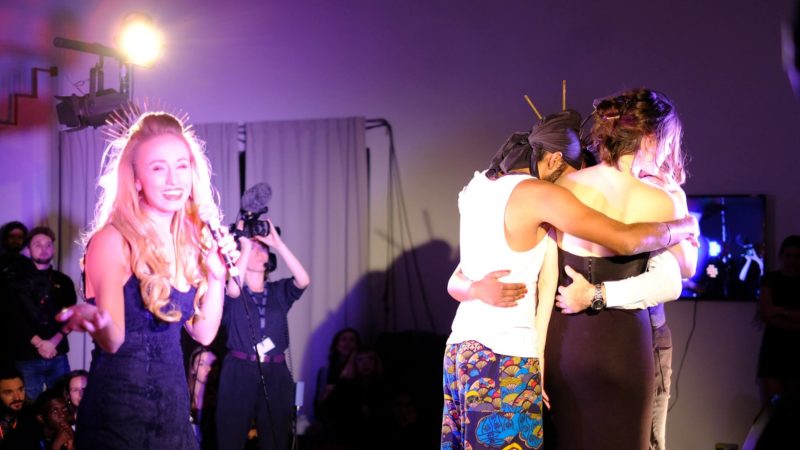 Peppy presenter Jadine takes to the stage to introduce the stars of the evening, eliciting genuinely excited whoops from the crowd as she runs through the £200,000 cash prize and potential contracts with the likes of Sony and the Royal Shakespeare Company. With a final round of applause, the cast, including talented young singers and dancers from Rise Youth Dance and Studio 7, take off up the stairs to set the stages for their first scenes. These take place across several floors of the Arnolfini, and it is the job of the production team from Bath Spa University‘s film programme to guide their section of the audience to each part as it unfolds.

First stop is the audition room, where reluctant members of the audience are instructed to step forward to a microphone by a faceless voice that asks for the lines again and again. “Tilt your head to the side,” comes the command. “Again – with more sex.” The set is well-dressed but it’s hard to become fully immersed with the hammering beat of another scene being played out for a different section of the audience next door, the music leaking through the curtain that separates the spaces. 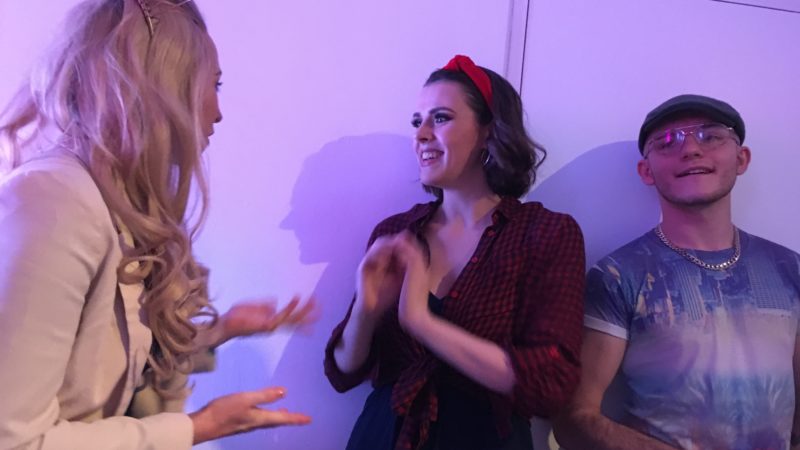 The plot is moved along by pre-recorded sections of television footage, styled as a behind-the-scenes segment on The Edge, where the contestants fight to keep their own image and personality as they go through makeovers, are bullied by the production team and presenters, and are made to reshoot conversations with each other.  The writing by Edson Burton is occasionally a little stilted and the young cast is not always convincing in their delivery; though how much this a deliberate nod to the manufactured awkwardness of programmes like Made In Chelsea is hard to gauge.

In other rooms, a team of editors plans to sell juicy clips to OK! Magazine and cut an argument between to contestants down to deliberately manipulate the viewer. Just before the interval, in a set dressed like a boardroom, the merits of each candidate’s ability to sell their image and make money for The Edge‘s brand are ruthlessly discussed by audience members. “It’s all over for the white male,” says one woman, tossing Scott’s picture aside in favour of backing Asha. 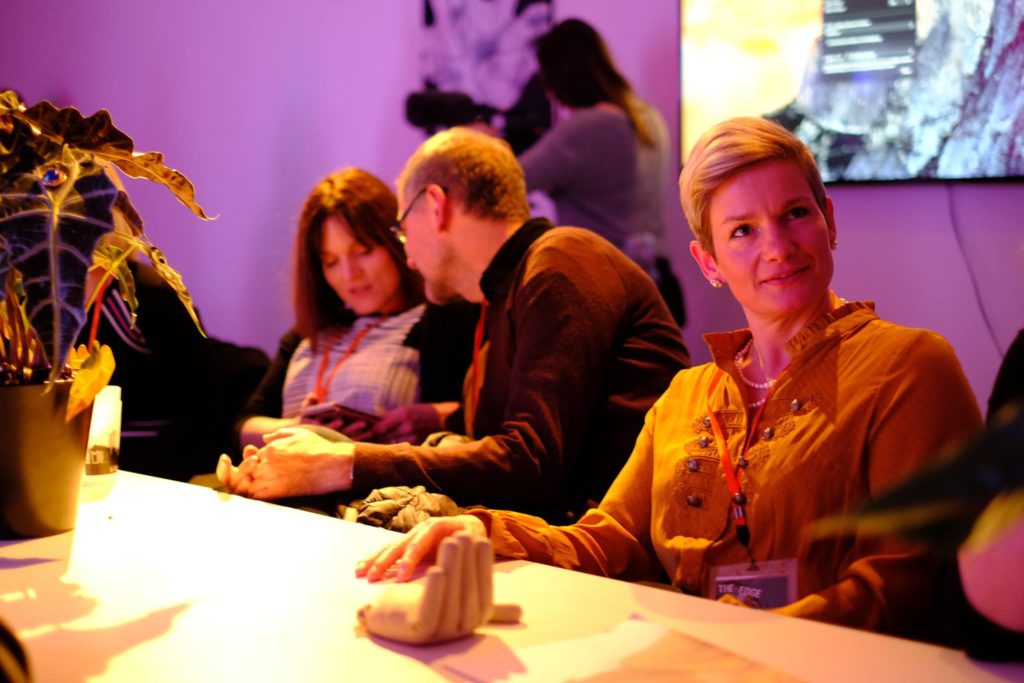 In one part of the performance, the audience is made to choose which candidate they should back, based on who will make the most money

Reconvening after the break, the entire audience is brought back together for the live final, where the four contestants get up on stage, along with the dancers who have been creating atmosphere in the journeys between scenes. The performances are genuinely impressive, the four main characters undeniably talented in their own ways. Ellie Bartram’s version of Lianne La Havas’ Lost & Found as the unstable Lucy raises goosebumps. 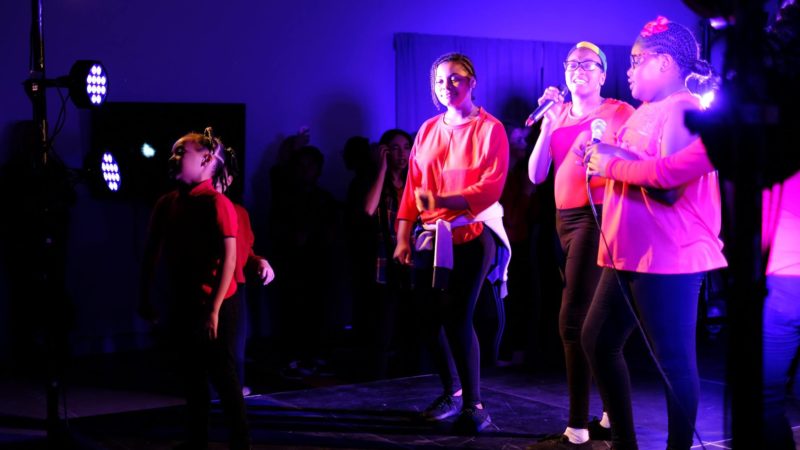 There are a few missteps in the final scene, with a sub-plot around Asher attacking her mother as a teenager feeling shoehorned in, but on the whole the atmosphere is skilfully created. The judges are gushing and self-obsessed, the contestants falsely encouraging when one is voted off, and presenter Jadine sickly sweet after each performance, her face being beamed live to the television screens around the room by camera operators who follow her every move.

Using a website built for the performance, the audience is encouraged to vote for our favourite performer, though we already have a suspicion that the outcome is rigged. When the final winner is about to be revealed, there is genuine tension and then a lovely moment of excitement from the supporting cast, who clap and cheer.

The Edge is a hugely ambitious show that has tackled a big topic with creativity and aplomb. The cast of young actors are fiercely talented and it’s a performance they should be rightly proud to have been a part of. That they are able to perform in this space with for a paid audience is a happy reminder that, at least for those in Bristol, there are plenty of other ways to showcase your talents outside of soul-sucking television programmes.

Find out more about Creative Youth Network at www.creativeyouthnetwork.org.uk