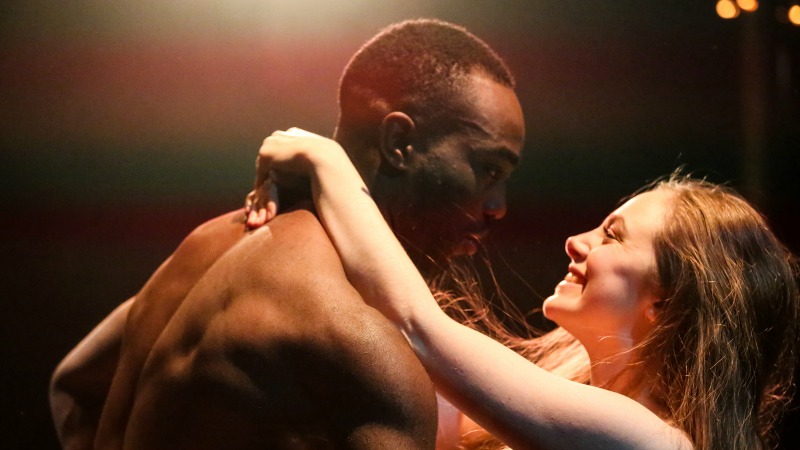 Thoughts of Romeo and Juliet may conjure up images of swooning young lovers, of Juliet leaning chastely down from her balcony on some sun-dappled Verona street. Tragic and doomed maybe, but also kinda sweet and with the faintest hint of chocolate box.

Not so this sexy, swaggering, savage co-production between Tobacco Factory Theatres and Shakespeare at the Tobacco Factory. Twentysomething director Polina Kalinina has created a bold, brash, noisy Verona, where you feel vividly the simmering resentment and bloodlust between the Montagues and Capulets – where a masked ball becomes an urgently hedonistic rave, and where young love is a thing of pulse-quickening urgency rather than a chaste swooning and mooning.

Emma Bailey’s sparse, flexible set centres on a revolving circular stage with detachable metal bars, giving it the aura of a slightly run-down playground – and, indeed, these bars are detached from their bases in the couple of bloody fight scenes between younger generations of Montagues and Capulets.

Sharply dressed, painstakingly bequiffed and with a sneeringly casual attitude towards violence, the latter evoke Romeo and Juliet’s great 20th-century offspring, West Side Story. These fight scenes are thrilling, with the threat of danger and menace hanging palpably in the air from the first exchanges.

And this is the thing about this Romeo and Juliet: everything feels so real, so fleshy, so flushed with emotion, so in the heat of things. Soon after, the Capulet masked ball is a thing of dark, techno-fuelled menace and unchecked debauchery, the tuxedo-clad men donning gasmasks to add to the sinister, anything-could-happen feel.

Of course all this passion and fire needs moments of quiet to offset it. After the shadowy, deafening excesses of the masked ball, the lovers’ first meeting – silent, awestruck, the spartan stage fully lit – is a quiet revelation. And at the end, the tomb that will house the lovers gives off a faint, eerie glow, softly promising its crucial role to come.

There are some captivating performances, too. Bristol Old Vic Theatre School graduate Oliver Hoare thrills as Mercutio – wordy, playful, swaggering, Dionysian. Paul Currier brings his usual quiet, measured dignity to the role of the Friar, whom he presents as a thoughtful, bookish, corduroy-clad father figure and a source of infinite calm wisdom to the hot-headed Romeo.

Clad in a variety of chic outfits that span 1930s to Barbarella, Sally Oliver’s Nurse is glamorous, earthy – and clearly loves Juliet in her brusque fashion, in a way that the latter’s parents (played with dignity and gravitas by Fiona Sheehan and Tim Knightley) strangely never seem to. Elsewhere Craig Fuller (another BOVTS graduate) brings a superb clipped menace and unquestioning authority to Tybalt, the Capulets’ imposing gang leader.

As for the lovers themselves, Paapa Essiedu’s Romeo has plenty of lithe grace and wide-eyed boyish charm (yes, you can imagine falling in love with him) as well as, in spades, that tinderbox of youthful emotions that lead him both to yearning love and, fatefully, horrific violence. Daisy Whalley’s Juliet, meanwhile, is moving to watch – demure, schoolgirlish, yet her passion (and susceptibility to being carried away by it) clearly etched from the off.

This is a Romeo and Juliet filled not with sighings and swoonings but with grunts and roars: passionate, full of vivid emotion, shot through with the (blood)lust of youth.

Romeo and Juliet continues at the Tobacco Factory until Saturday, April 4. For more info and to book tickets, visit www.tobaccofactorytheatres.com/shows/detail/romeo_and_juliet1