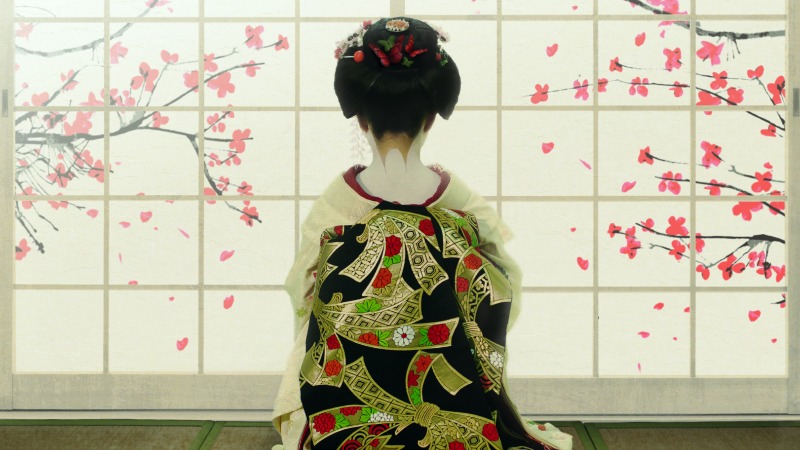 Back at the Tobacco Factory for their twelfth successive year, chamber-opera specialists Opera Project have mastered the art of intimate, in-the-round opera, translating much of the heightened emotion of this powerful art form to a smaller space.

At the centre of it all, Stephanie Corley is a splendid Butterfly – elegant and slyly demure as she is presented to Pinkerton as his youthful bride, later overwhelmed by her grief at his betrayal. Her voice is a thing of power, too, by turns quietly seductive and wracked with emotion.

The porcelain make-up and stylised, almost robotic gestures of Butterfly and her domestic retinue (particularly Miranda Westcott’s faithful maid Suzuki) give them a powerful, otherworldly quality, like Japanese puppets or kabuki performers. Corley is also at the heart of the production’s most moving set pieces – such as the two occasions when she drapes herself in the US flag, first in adoring expectation of her returning husband and later, in its harrowing counterpart, grief-stricken, her (puppet) son blindfolded in the corner, as she commits hara-kiri with her father’s ceremonial sword.

The production’s other most moving moments occur when least is happening – such as Butterfly’s long night vigil as she waits for Pinkerton’s boat to come into harbour. Admirably scored by conductor Jonathan Lyness and his excellent orchestra, the changing depths of the night are conveyed by elegant screen projections, the music reflective and quietly expectant.

Unfortunately Pinkerton (Jonathan Pierce), though a fine singer, lacks the manly gravitas the role seems to demand. Even allowing for opera’s stylised feel, it felt difficult to imagine Butterfly’s passion for this nervous, stuttering suitor.

Such caveats aside, though, Opera Project have managed another crisp, elegant, atmospheric rendering.

Madam Butterfly is at the Tobacco Factory Theatre, Bristol, until Saturday 25 October. For more info and to book tickets, visit http://www.tobaccofactorytheatres.com/shows/detail/puccinis_madame_butterfly/