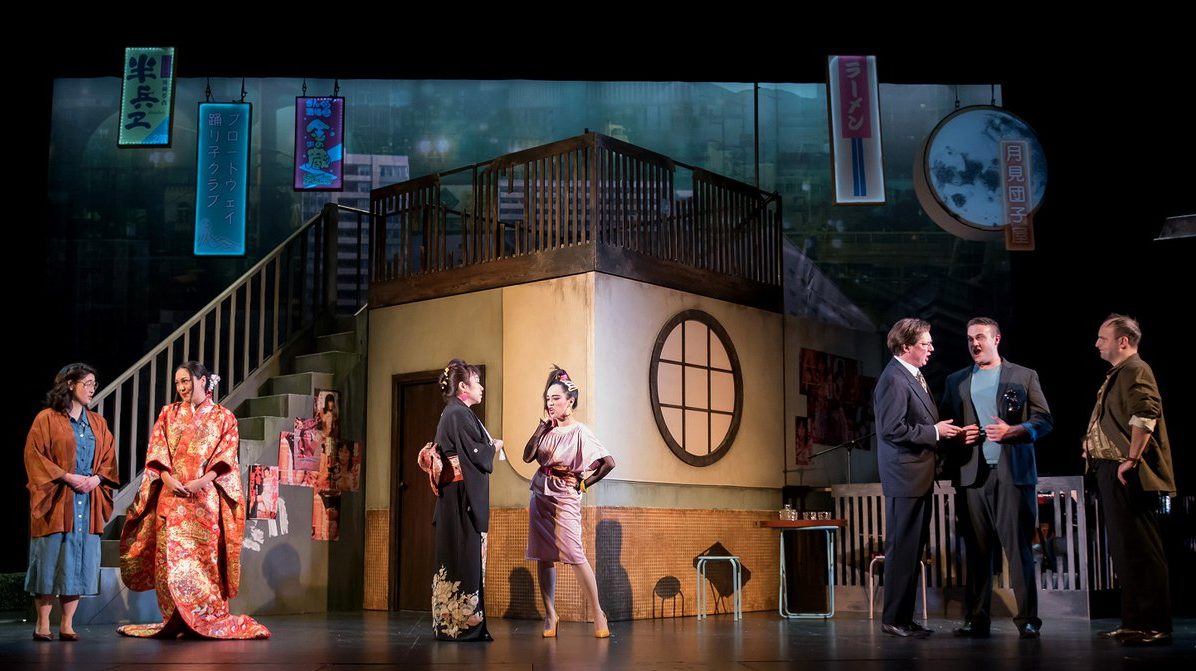 Puccini’s opera Madam Butterfly premiered in 1904. It is a story of a brash American merchant Pinkerton who marries a Japanese girl – Butterfly – only to abandon her when he returns to the US. She waits patiently, believing that he will return one fine day. When he does come back, it is with his new American wife in tow, with tragic consequences.

Madam Butterfly explores the complications of different cultures interacting, and shows that Western men’s habit of casually adopting Asian women as ‘comfort wives’ without any sense of real commitment is hardly a new phenomenon. Pinkerton’s fetishisation and othering of Oriental women is as relevant in an era of mail-order brides and sex tourism as it was a century ago. So Puccini’s opera has plenty of echoes that could be highlighted for a contemporary audience.

Unfortunately, these echoes are not enough for director/librettist Poppy Burton-Morgan in this Opera UpClose production. Her fresh adaptation is driven by a desire to “remain alive and responsive to how the ‘truths’ of older works need to be re-examined and indeed reimagined through a lens of a 21st-century, politically and socially progressive agenda”. But in doing so she does a massive disservice not only to Puccini, but also to Butterfly herself.

Puccini’s original Butterfly is a woman of independent agency who makes her choices – however misguided – and abides by them in the face of repeated attempts by those around her to dissuade her. But Burton-Morgan deprives her of that independence, instead attributing her fidelity to Pinkerton and ultimate self-destruction to post-natal depression, making her a passive victim of poor mental health.

In seeking to avoid the “outdated stereotypes” which she believes infest the opera (which is an odd way of looking at the piece, incidentally – misplaced love is a fairly universal emotion, not one confined to stereotypical Japanese women), Burton-Morgan seems to have stopped seeing Butterfly as a woman and a person, and seen her only as a stereotype that needs rectifying.

Burton-Morgan’s reimagining also extends to shifting the setting from Japan in the late 19th century to 1980s Japan. There seems little rhyme or reason to this temporal shift, and it creates more problems that it solves (if it actually solves any ‘problems’ at all). When the storyline is premised on communication by letter and the patient uncertainty of waiting for Pinkerton’s ship to return, it seems perverse to move it to an era when people had telephones and more readily travelled by aeroplane.

And if you’re going to set something in the Eighties, you really need to do better on the period detail than graphic print shirts for the women and Miami Vice rolled-sleeve suits for the men. Designer Cindy Lin may be too young to have been around in the Eighties, but many of the audience will remember them – and they didn’t look like this.

The decision to re-orchestrate Puccini’s music for an ensemble of just four instruments is also a mistake, making the show sound like a rehearsal rather than a performance. It might just about work if Opera UpClose were presenting the work in the way the company’s name suggests, in the snug confines of the Tobacco Factory or the Old Vic’s lovely new studio, for instance.

But this production is touring to theatres that seat hundreds. Ruth Chan’s orchestration is simply too thin to fill the space – although it is satisfying to see the singers demonstrating that you do not need a microphone stuck on your forehead to reach the back row of Bristol’s Theatre Royal (directors of musicals, take note). But someone should have thought about how a cast of just eight would manage to deliver a decent Humming Chorus in an auditorium this size.

That is one of the many aspects which suggest that Burton-Morgan may have been more focused on her role as a librettist ‘radically reworking’ Puccini’s opera than on her role as a director presenting a work to the public. The blocking of many scenes is highly distracting, with characters unnecessarily upstaging the action on which the audience should be focusing. And the puppet which is used to represent Butterfly and Pinkerton’s son is not just distracting, but weird: it’s hard to concentrate on the narrative and sung emotions when you’re wondering why a child with flesh-coloured hands has a black doughnut where his face should be.

Opera UpClose’s reworking of Madam Butterfly manifests all the flaws that happen so frequently when directors decide that a classic work needs updating. An overwhelming superstructure of ‘concept’ can often bury all that is good in the original. And this Butterfly definitely fails to fly.