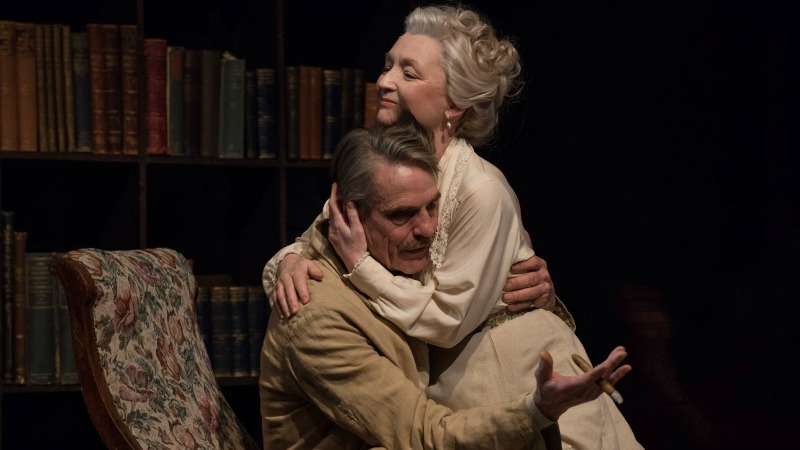 “Here at the age of 39, I began to be old,” ran the opening lines of Bristol Old Vic’s most illustrious alumnus, Jeremy Irons, in his role as Charles Ryder in 1981’s unforgettable and game-changing Brideshead Revisited (BBC). And now, aged 67: “Stage acting is hard for an old man like me, and the older you get the harder it is to retain lines.”

But there stands Irons on the BOV stage, after a ten year break from the theatre, a lean and still craggily handsome grey wolf, emanating That Voice of fag-ash and gravel soaked in port. Delightfully, the famously militant old gaffer sparks up a ‘cigaaarrrr’ in the first 30 seconds and puffs on it intermittently throughout. A whiff of tobacco pervades the galleries: aah, the great smell of brute.

And so begins Eugene O’Neill’s lengthy, relentless familial tragedy of failure, addiction, guilt, emotional enmeshment and woundings. True to the circular nature of dysfunction, the play goes round and round the subject matter symphonically, each time in a different key and with a different player leading that movement.

And by god, what a lot of lines there are to retain in this play! Irons fluffs only once and threatens to get into a loop, but gets out again elegantly with a small prompt from his stage son (it’s a sobering thought that O’Neill would probably get short shrift from today’s theatre producers in the current climate of short autobiographical monologues and spare ping-pong texts, as he touted his weighty opus around the agencies in a wheelbarrow).

O’Neill is one of the behemoths of mid-20th century theatre and his work was part of the move towards psychological realism and naturalism laid down by Chekhov, Strindberg and Ibsen that paved the way for Williams, Miller and Mamet. In a 1949 essay, Arthur Miller made the case for a tragedy in his own age for “we who are without kings,” or in O’Neill’s case, without a God.

As director Richard Eyre comments in this production’s programme notes: “From his own life [O’Neill] excavated the pain and overwhelming loneliness of living in the first century of which it could be truthfully said that God is dead.” In Long Day’s Journey… the opium of religious belief has been literally replaced by opiates and alcohol: father and both sons are alcoholics, while mother shoots up morphine under the guise of needing ‘a little rest’ upstairs in the afternoons.

And deep loneliness is the central theme of this play, while the family dynamic is the vehicle, a dynamic that is played out for us in full and in all shades and permutations: whole family, husband and wife, mother and son, father and son, son and son. Only a short scene with mother and the Irish maid supplies a little light relief, with Jessica Regan providing some welcome theatrical yeast.

Despite its length and repetitiveness as a play, it is superbly acted throughout by the whole cast. However, unlike the rest of his stage family, Irons struggles noticeably with the American accent – his own cut-glass English accent soon begins to get the upper hand, with Brideshead threatening to invade Connecticut. That aside, he brings touching, nuanced tenderness and vulnerability to the role of the otherwise domineering and penny-pinching ‘big daddy’, James Tyrone. And lighting designer Peter Mumford affords us some necessary fun light relief in Tyrone’s obsession with turning off lights to save cents.

However, it is Lesley Manville’s sheer brilliance in her role as the fallen matriarch that takes centre stage. Her immaculate and infallible sense of timing, cadence and presence steals this show, and is a match for Richard Eyre’s even-handed direction and vision.