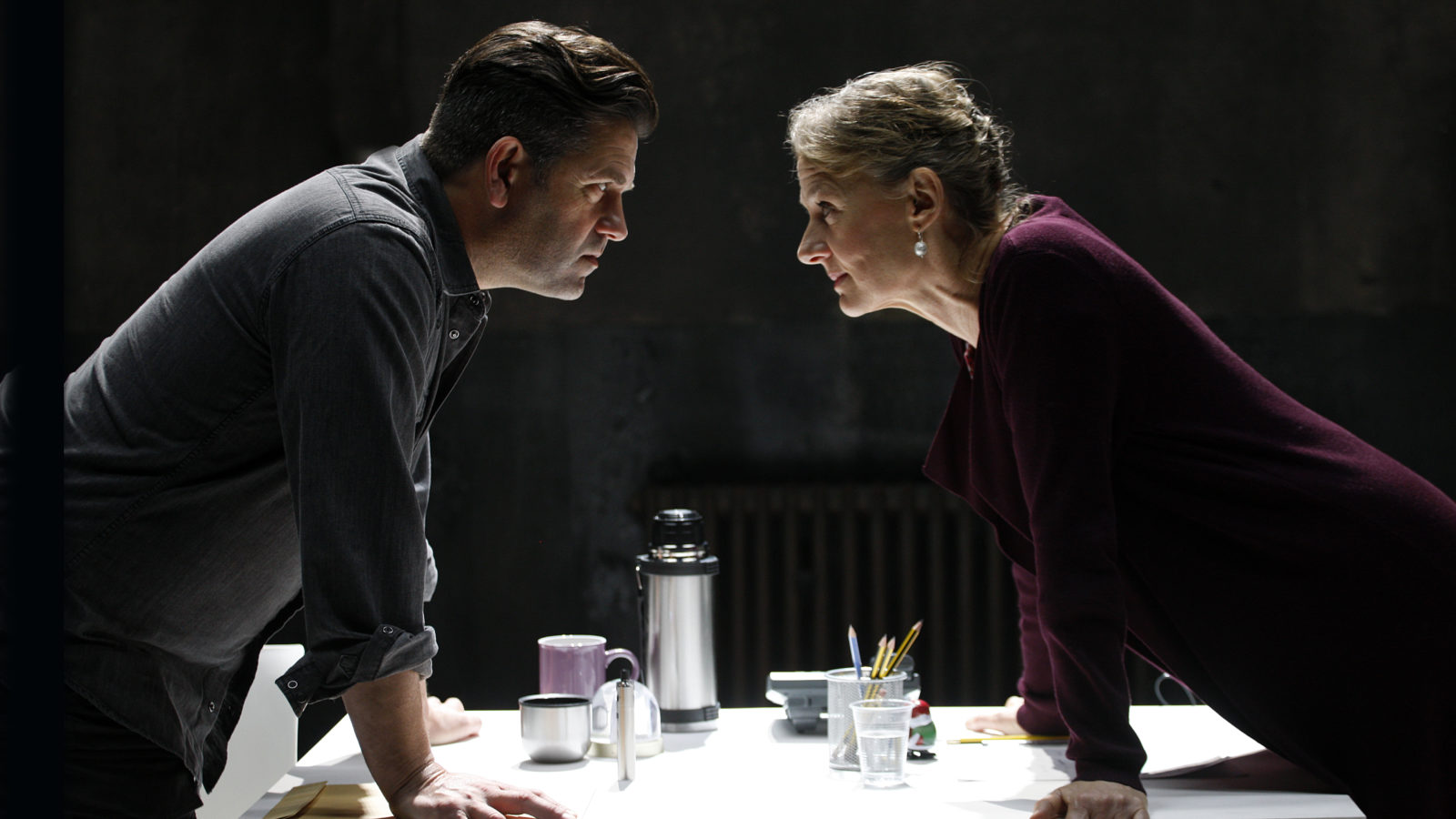 Great excitement ushered me into the new Ustinov show: Christmas Eve, brought to us by the trio who treated Bath and then the West End to F. Murray Abraham in The Mentor earlier this year: Daniel Kehlmann (writer) / Christopher Hampton (translator) / Laurence Boswell (director). That  was a brilliant piece of theatre and a very hard act to follow.

Christmas Eve is billed as a 75-minute thriller. It’s a two-hander set in real-time, on the night before Christmas. The superb acting talents that are Patrick Baladi and Niamh Cusack are on stage constantly, without as much as a scene break. They give it their all and it’s worth getting a ticket just to enjoy their performances.

However, while I’m at risk of sounding like that old Grolsch advert (“Schtopp! This blue movie is not ready yet!”), er, this play is not, well, ready yet. 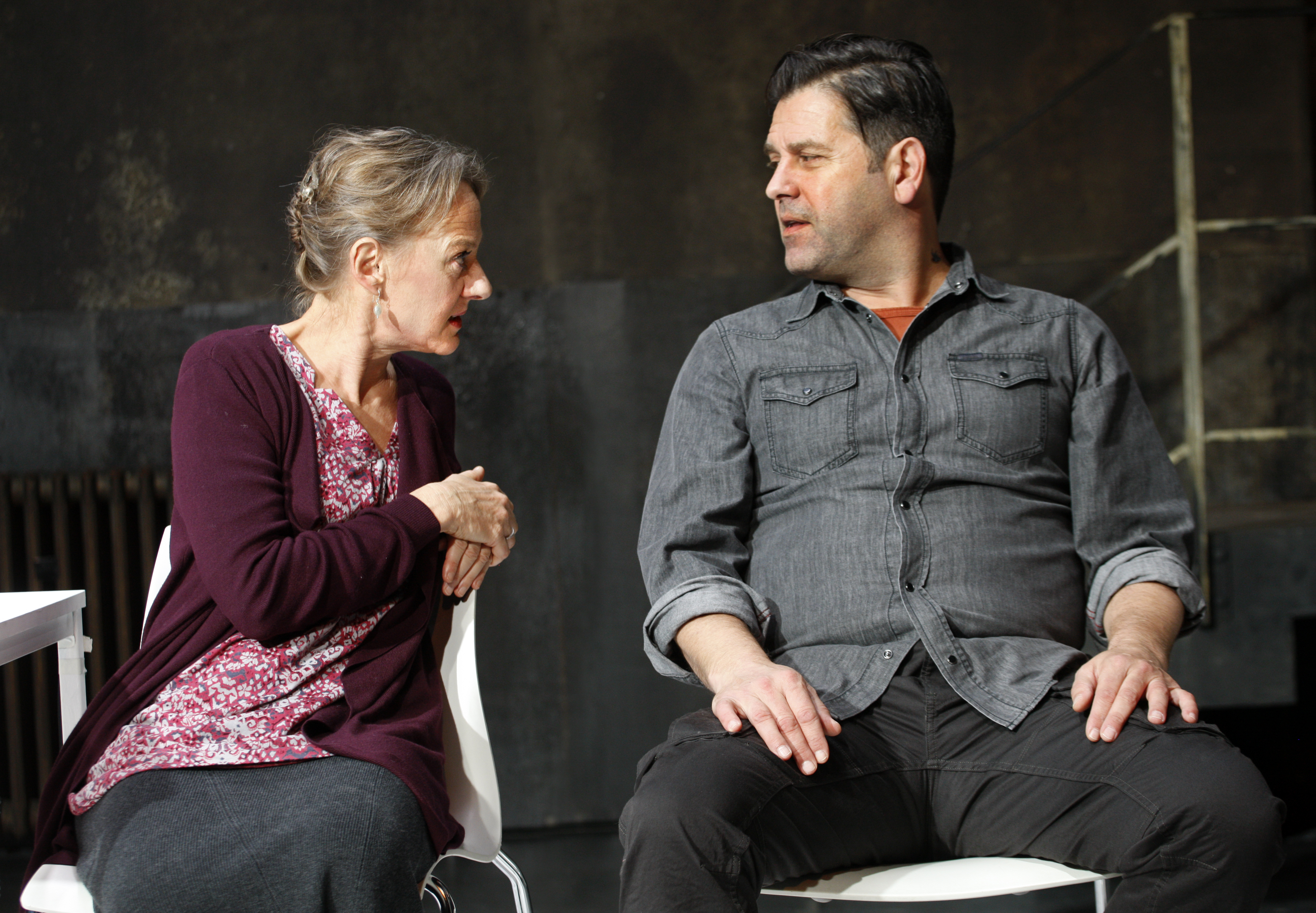 Christmas Eve addresses the clash between the rights of the individual to protest and privacy (amongst others) and the rights of the population not to be bombed/attacked. Baladi represents the State; Cusack – at times – the more ambiguous “everyone else”.

The problem is that a “two people, one room, real time” set-up carries a lot of theatrical risk. An audience needs action inside the room and also – in a thriller like this – for the pressure and discomfort to rise and rise.

Unfortunately here, the first quarter is the kind of polemical debate – between two very impassioned opponents – that you’d walk away from in a pub, bored. After that, pressure is then applied with a traditional ticking clock, a midnight deadline and bits of information thrown in from outside to make the ground more uneven under our feet. 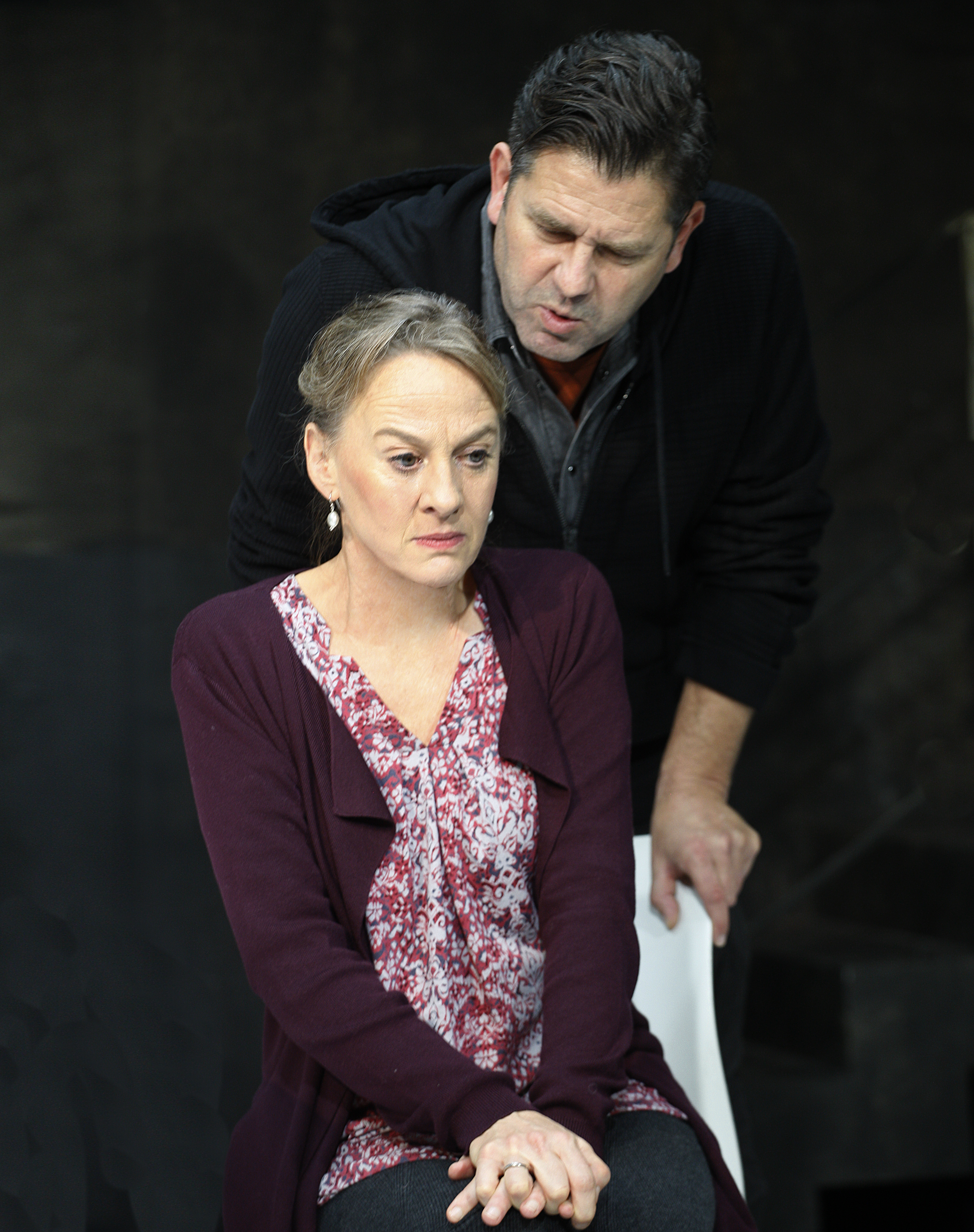 It’s billed as a thriller, but it just isn’t exciting. It breaks my heart to say so, but it’s just a bit boring. It’s an academic piece, pitching one obvious argument against another obvious argument, lacking thrills despite being chock-full of talented people’s contributions.

The written characters lack depth, in a way that left me scratching my head: how could this have happened? Having Cusack only ever get emotional about the children she didn’t have feels like a shockingly lazy and stereotypical way of showing a middle-aged woman’s soul. Baladi’s later approval-seeking, moving closer to her, offered a glimmer of creativity. But this is clumsily abandoned and this flicker of something unexpected goes unfulfilled. 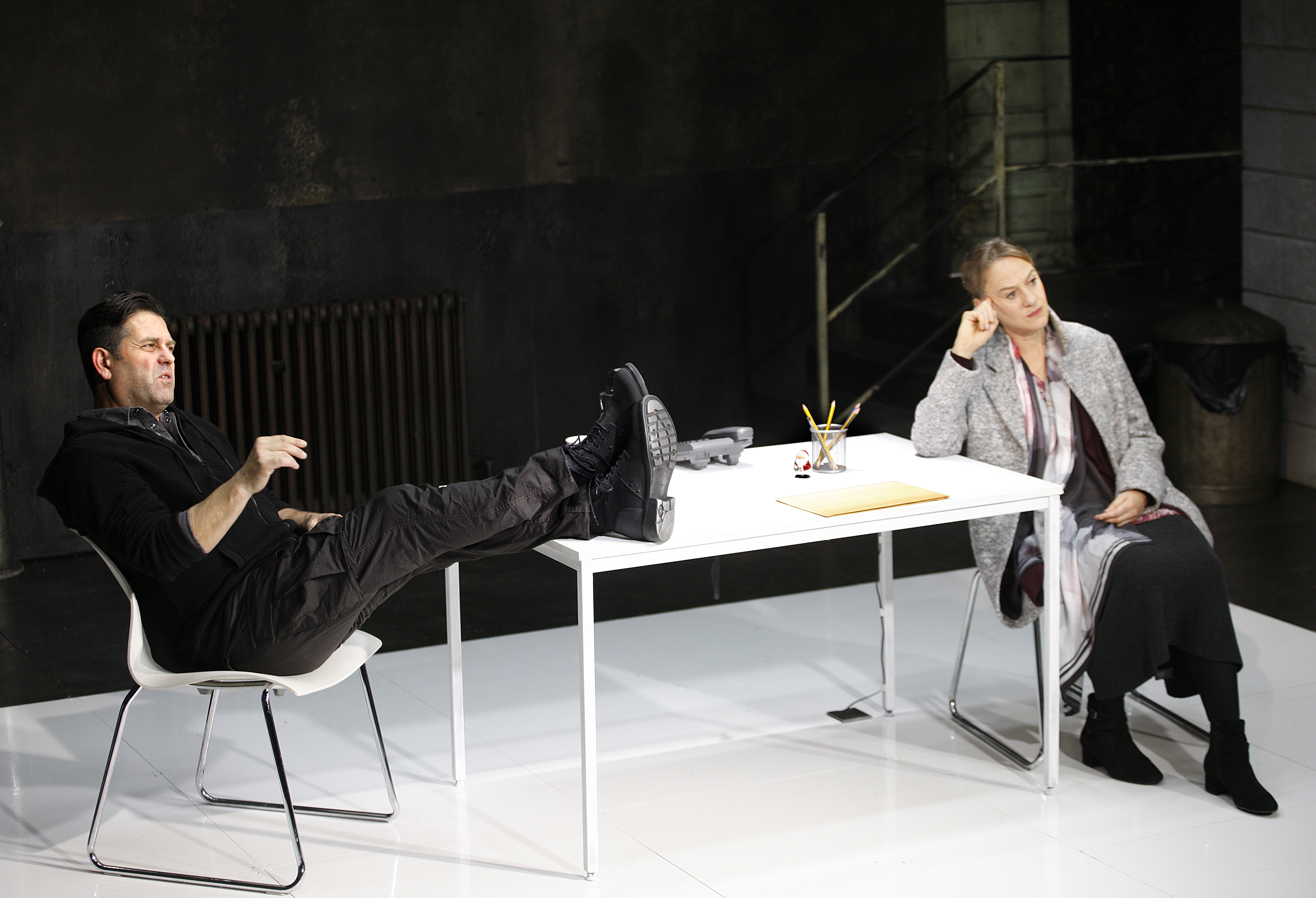 I am struggling to understand what I am missing here. I wanted so much to revel in yet another marvellous production: after all, this is a killer team. As a writer (full disclosure!) it can be reassuring when you see that your heroes are human, but I would never wish anything but peak performance for any creative, and that makes this a very hard review to write. 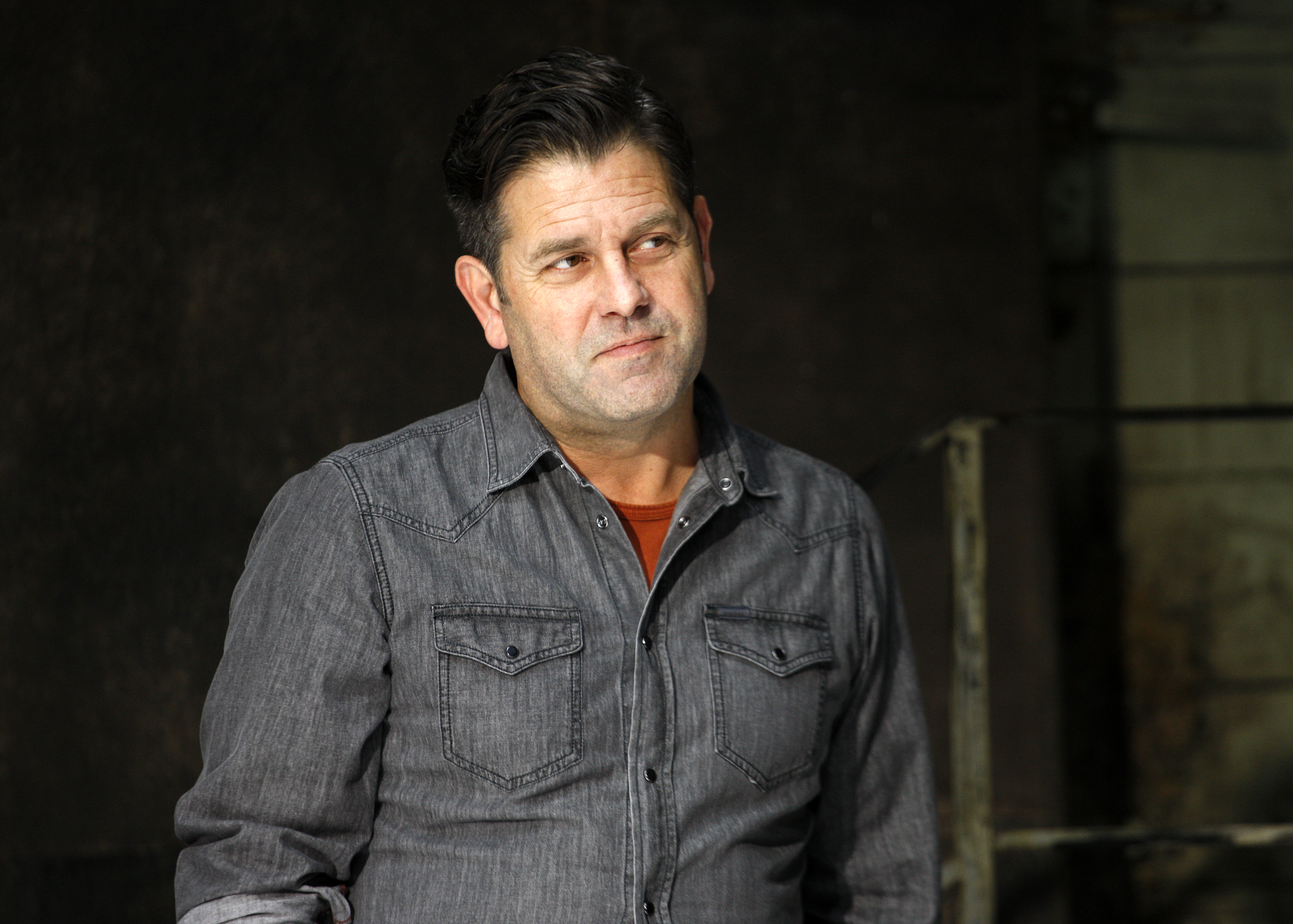 So here’s my challenge to you as an audience, actual and potential: come out fighting for this show and rub my nose in what I’m missing. I badly want to be proved wrong, idiotic, a philistine. Go and see two smashing actors do a good job. Enjoy the battle between two opposing ideologies, and the “who’s right, who’s wrong?” that’s on offer. There’s much to think about in this play. There’s great talent on stage.

But it’s time for a Grolsch (other refreshments are available), because – sadly – this play is not ready yet.