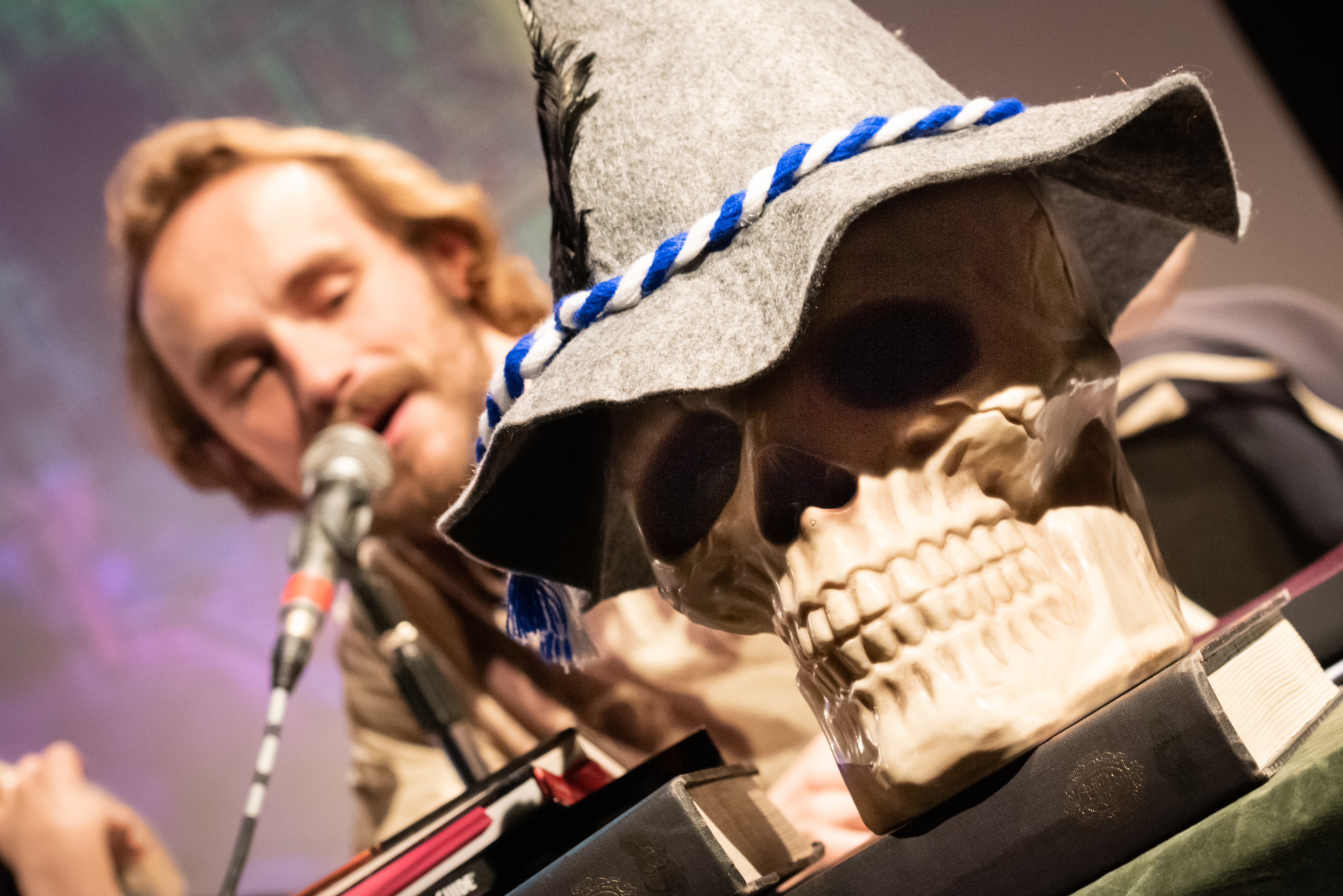 Join our brave band of heroes in an epic fantasy quest, improvised live before your very eyes. Led by the all-powerful Gamemaster – our heroes will search for treasure, battle deadly foes, and contend with dangerous twists of fate as they struggle against evil to save the world!

Our heroes enter a magical fantasy world (think Lord of the Rings, with a few twists), inspired by D&D, the fantasy tole-playing game much loved by the kids from Stranger Things and many others.

Here’s cast member Alice Taylor-Matthews to introduce the strange and delightful world of Tales of Adventure.

Tell us briefly the ToA story so far.
Tales of Adventure is a live Dungeons and Dragons (D&D) comedy show. Set in a fantasy world where anything can happen, we follow a group of heroes as they embark on a series of madcap quests. D&D often has a similar flavour to Lord of the Rings or Game of Thrones, but Tales of Adventure has been compared to things like The Mighty Boosh or The Goon Show – so more of a LOL of the Rings if you will!

Our adventurers are:
Geoffrey Bango, half elf bard; a wannabe ladies man, however the only lady in his life is his grandma,
Reverend Hatchet, human(ish) druid; a nature lover often found transforming into a tree,
Trym Tosscomble, halfling rogue/barbarian/warlock/goblin; a seemingly charming old lady who has a penchant for tattoos, devil worship and backflips,
Bagsi Badly, half orc paladin; a lover and a fighter – just as happy seducing her way through life as she is putting her fist through someone’s chest (that actually happened once)
Keeping everything on track as narrator is our all-powerful, all knowing, and often cruel Dungeon Master.

How and when did the show come together?
A few years ago, one drunken evening at the Bristol Improv Theatre, Ste Brown (Geoffrey Bango) suggested they do an improvised D&D show. When he sobered up in the morning it still seemed like a good idea. 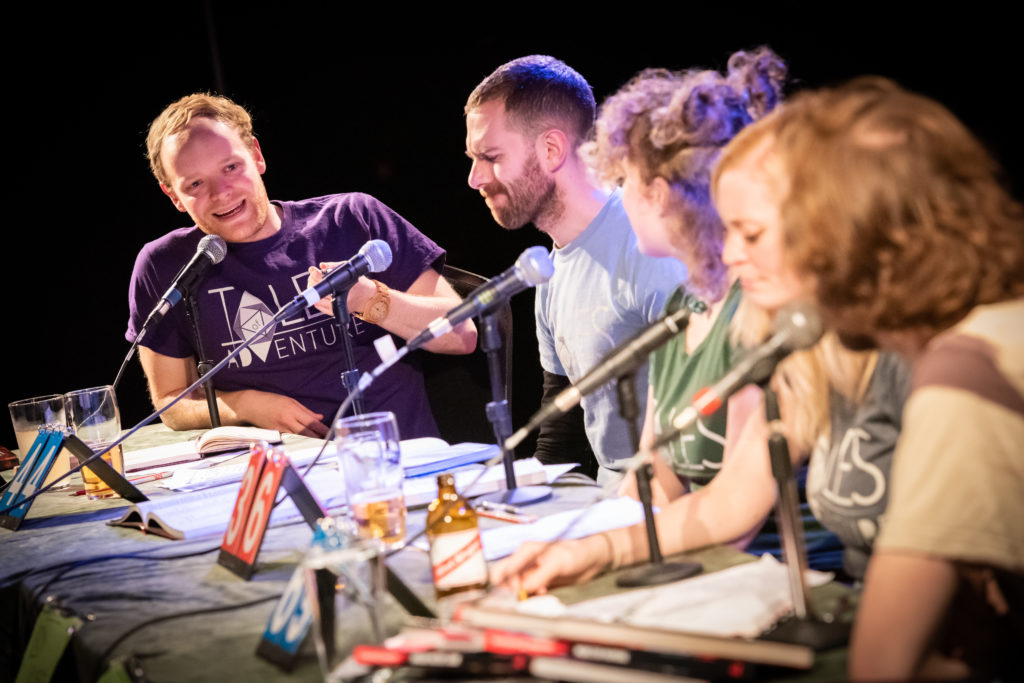 Ste was certainly the catalyst for the show being created – but everyone in the show loves fantasy, so it was easy to assemble the cast! Role play and improv are really the same thing; creating characters and telling stories is what every theatre show will do. This show gives us the opportunity to do it in a world full of magic and mayhem that is frankly a gift to any improviser.

What helps a lot is that Stephen, our Dungeon Master, has been playing D&D since he was a kid so he has an excellent understanding of the rules. This keeps everything together and ensures the show still works when we throw our biggest, craziest ideas at him!

Describe a little how each show works. What does everyone do?
The show itself is a sight to behold.

Traditionally D&D relies a lot on description and storytelling (like in Stranger Things when the gang are down in the basement playing – they are just reacting to each other), so we have worked to honour that element. The stage is set up as if for a radio show or podcast recording – or the most unruly episode of Question Time you have ever seen… 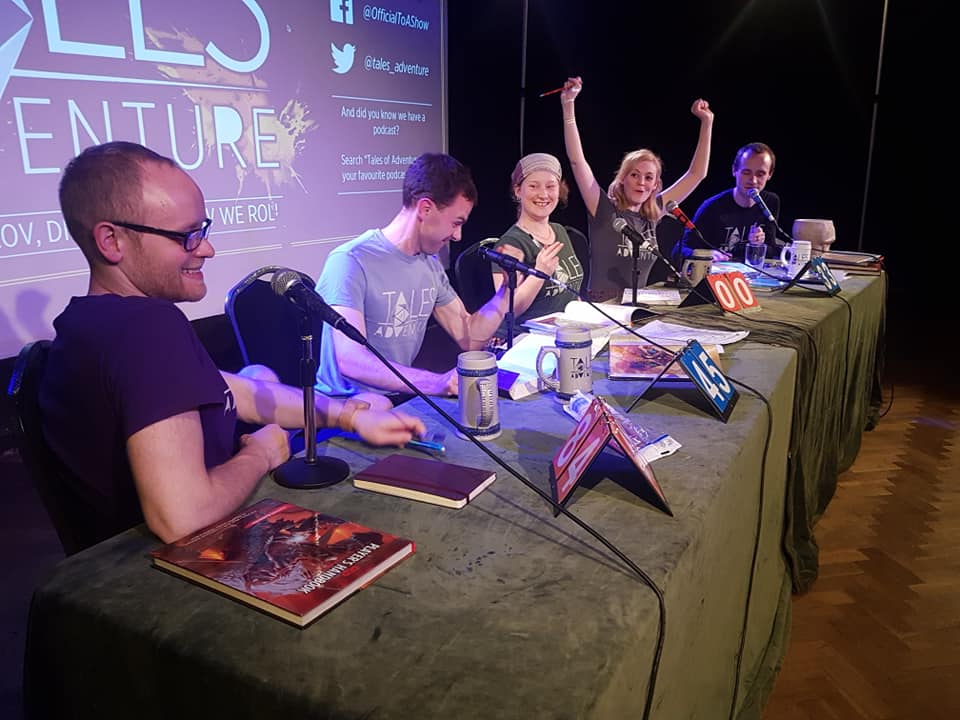 There are usually very few props involved (though a certain slide whistle may make a reappearance soon), but the entire show is accompanied by live illustrations by artist Graham Johnston. As the characters progress along their journey, meet amazing new creatures and throw themselves into deadly combat, Graham is drawing everything! This is projected onto the stage – so mighty beasts and bizarre places appear before you as you watch.

Every show involves lots of audience suggestions. These are different each time depending on the perils we might be facing, so previous shows have asked for the unfinished business a ghost might have or magical items you could find in a time-travelling gift shop.

Throughout the show the audience continue to play a part, be it voicing a mob of angry villagers, adding some moaning and clanking to a castle dungeon or deciding what a giant poo monster sounds like when it explodes. 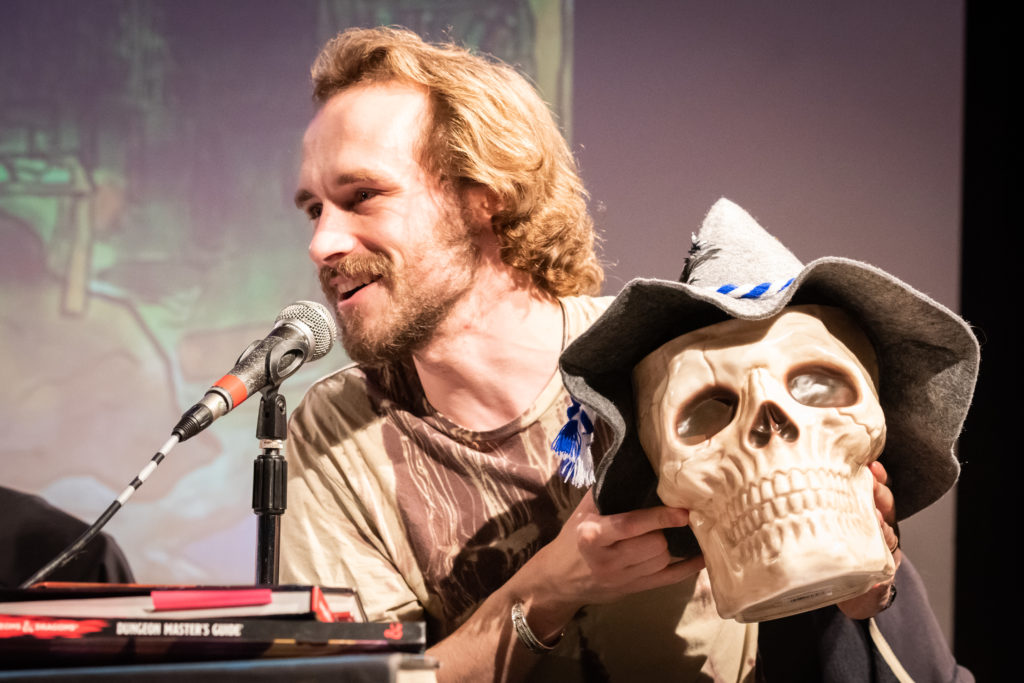 Tell us about your series themes so far. Did you have a favourite, and if so why?
Each season follows our adventurers (we used to call them ‘heroes’, but they have not always done what’s right) on a quest. The show follows them as they try and get gold, save a town from monsters, escape looming danger etcetera.

Each season also takes on a different theme. Our adventurers have been to the Wild West, space, hell (which looked a lot like an office), a haunted house, and a time-travelling museum of things. Hell was a lot of fun, we made a deal with the devil which differently won’t impact us or have any repercussions later on.

How does each season manage to work its way towards a satisfying conclusion?
Stephen writes the seasons but because it’s improvised things don’t always go to plan. We’ve thrown a lot of curve balls his way in previous seasons. However he is somewhat of a genius and will always have a backup plan.

What sorts of audiences would you recommend come and take a look?
If you’ve been digging Stranger Things or like fantasy, you’ll have a great time at one of our shows. You don’t have to have played D&D to enjoy it. It’s a very silly comedy show but, um, maybe not suitable for children.

The next season of Tales of Adventure begins on Thursday, September 26. For more info, visit improvtheatre.co.uk/event/tales-of-adventure-episode-1 at Bristol Improv Theatre (BIT). Tickets are available from the BIT: £7 per show or £15 for a season pass.
You can find ToA at twitter.com/tales_adventure and www.facebook.com/OfficialToAShow