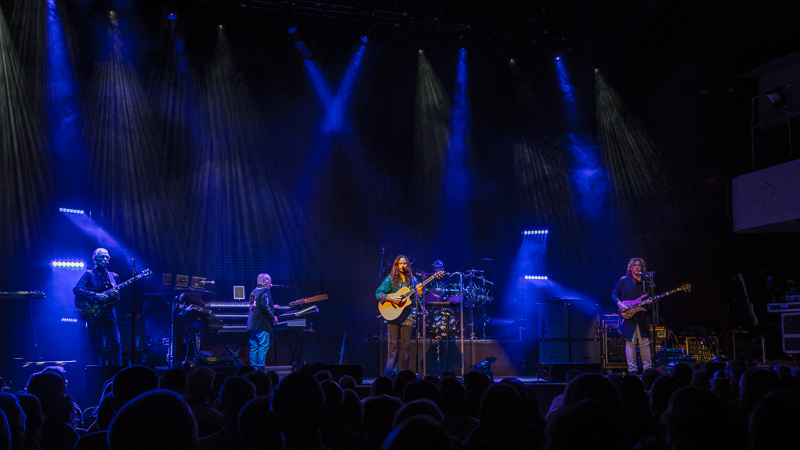 One of the many great things about the ‘classic’ Yes line-up was that virtually every band member was so distinctive. Love ’em or loathe ’em, nobody plays guitar like Steve Howe, bass like Chris Squire, keyboards like Rick Wakeman or sings like Jon Anderson. Take any of them out of the band context and they’re still instantly recognisable. For various reasons, Yes are down to just Howe (plus drummer Alan White) these days. One of these is the loss of Chris Squire, who’s gone to join Bowie, Lemmy and Keith Emerson in the great supergroup in the sky. Tonight’s show opens with a tribute to him that strikes, if you’ll forgive the pun, exactly the right note. A single spotlight is trained on his trademark white Rickenbacker bass while the video screen displays a montage of images set, appropriately enough, to Onward. It’s moving without being mawkish.

Inconveniently for the chroniclers of rock history who like to tell a different story, most of the big prog bands were entirely unaffected by punk. Yes continued to headline arenas until well into the late seventies. But they suffered their own meltdown with the departure of Anderson and Wakeman and arrival of Video Killed the Radio Star Buggles duo Trevor Horn and Geoff Downes. It’s hard to over-state how controversial this was back in 1980. Your correspondent can well remember scuttling home from school with a copy of the resultant Drama album and playing it with great trepidation, only to find, with some relief, that it was a proper Yes record rather than some ghastly hybrid. Indeed, if one were to level any criticism at Drama, it is that it tried perhaps a little too hard to recapture the adventurous sounds of ’70s Yes.

They rarely play much of it these days, so getting to hear the whole album performed in sequence was something of a treat – especially with Downes back in the band for a second stint. Epic opener Machine Messiah remains as bold a statement of intent as ever and the closest Yes ever got to metal, unconsciously anticipating the prog-metal explosion of the new millennium. White Car is arguably the oddest and certainly one of the briefest compositions in the Yes songbook, but sets up Does It Really Happen? perfectly. Reworked Buggles song Into the Lens wraps a pop sensibility inside a complex arrangement in a way that shouldn’t work but does, while ace album closer Tempus Fugit puts Squire’s old chum and replacement Billy Sherwood to the test with its intense, ribcage-rattling bass lines. He passes with ease.

The lovely, comparatively simple title track from Time and a Word reminds us both of Yes’s sixties roots and the fact that Squire isn’t the only member of the band to have carked it. Howe dedicates the song to his late predecessor, Peter Banks, recalling how he learned the whole album overnight as the ‘new boy’ in the band. That was 46 years ago, fact fans. Leading into a storming Siberian Khatru, he reveals that Steven Wilson is currently remixing rock history’s most maligned – and fabulous – concept album Tales from Topographic Oceans in 5.1 for release later this year.

Engaging vocalist Jon Davison, who’s now been with Yes for four years, faces the trickiest task tonight, stamping his own mark on songs written by both Horn and Anderson without overdoing the re-interpretation. Fortunately, he’s inherited some of Anderson’s wardrobe and much of his hippy-ish nature, delivering those, ahem, steam of consciousness lyrics with absolute conviction and choirboy clarity in a voice whose pitch threatens venture into dog-bothering territory at any moment. Yes’s sole protest song, the slightly twee Don’t Kill the Whale, is followed by their atypical biggest hit, Owner of a Lonely Heart, the increasingly professorial Howe expanding and extending Trevor Rabin’s original guitar solo.

We all know what’s coming after the interval. And since there’s no such thing as a casual Yes fan, this capacity audience knows every single note of 1971’s brilliant Fragile. Opener Roundabout has long been a staple of Yes’s live shows, but we don’t often get to hear those shorter pieces, such as Wakeman’s Cans and Brahms (skilfully performed by Downes) or the Bill Bruford oddity Five Per Cent for Nothing. As on the album, Long Distance Runaround segues gracefully into Squire showcase The Fish, and all eyes are on Sherwood. No pressure, then. He pulls it off magnificently and is rewarded with a huge round of applause. Howe then delivers a note-perfect solo acoustic Mood for a Day, providing the calm before the storm of soaring album closer Heart of the Sunrise, during which Davison wisely avoids imitating Anderson’s Lancashire vowels, reaching instead for some impossibly high notes. Together with encore Starship Trooper, this is vintage prog at its dazzling, ambitious, high-wire best, blending beautiful melody with rhythmic complexity. Any chance of doing the whole of Topographic Oceans next time, chaps?