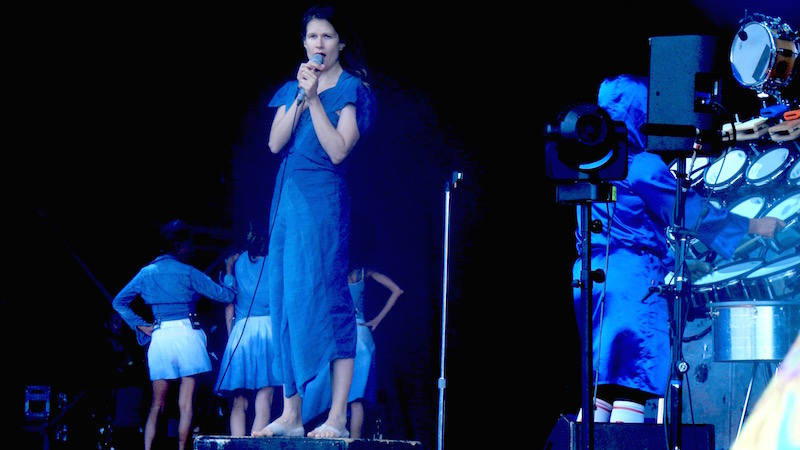 Is it good luck or bad luck that’s supposed to come in threes? Whatever, this year’s excellent and broad-ranging WOMAD programme seemed to throw up several three-of-a-kind combinations to compare and contrast in various categories. Sadly, we’ll have to overlook the ‘three acts who couldn’t get visas’ section thanks to our wonderful Prime Minister’s Hostile Environment  policies’. God bless Bristol’s wonderful Yama Warashi for stepping into one of those vacancies so perfectly. 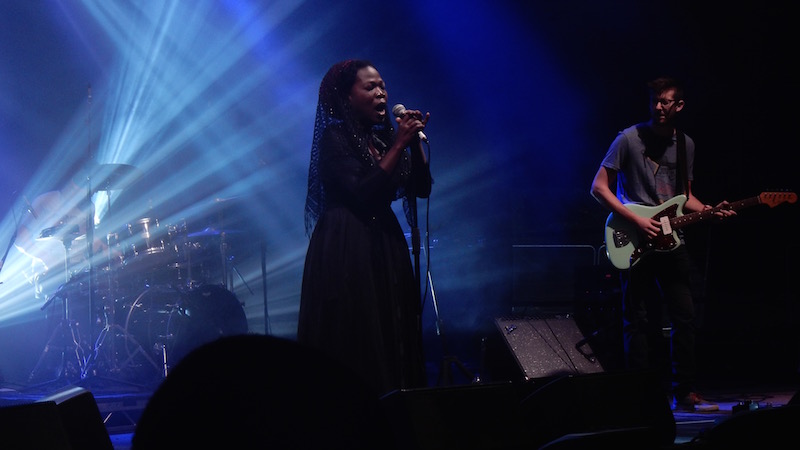 Three Divas: Always plenty of these at WOMAD and this year three debut performances proved crowd-pleasing. Haitian Moonlight Benjamin’s set drew heavily on swampy retro rock guitar at times recalling Tom Waits. Her commanding performance was most electrifying, however, in a stripped back Orisha invocation with simple conga backing.

Nothing simple about La Dame Blanche, however, whose stylish outfit and big production sound were merely the context for an unrelentingly sassy performance. Smoking a fat Havana cigar while playing the flute she cast an unforgettable figure, and her raucous Spanish lyrics provoked delighted belly laughs from the Spanish girls clustered at the front.

It was Parisian phenomenon Camille (pictured above) who proved Queen of the Weekend, however, with a combination of poppy music ideas with stark arrangements and theatrical delivery that defied a sudden downpour. With her male band members clad in dresses, a live-wire trio of female singer/dancers and a unique bass instrument made entirely of drums she delivered a breathlessly varied sequence of songs including the Dead Kennedys’ Too Drunk To Fuck, the traditional Les Loups (complete with elegant country dance) and her plaintive hits Lassoo and My Man Is Married But Not To Me. She finished solo and accapella with a perfect Brel-like chanson, providing both the rhythmic accompaniment and the fluent melody, that commanded a pin drop silence across the main stage crowd. 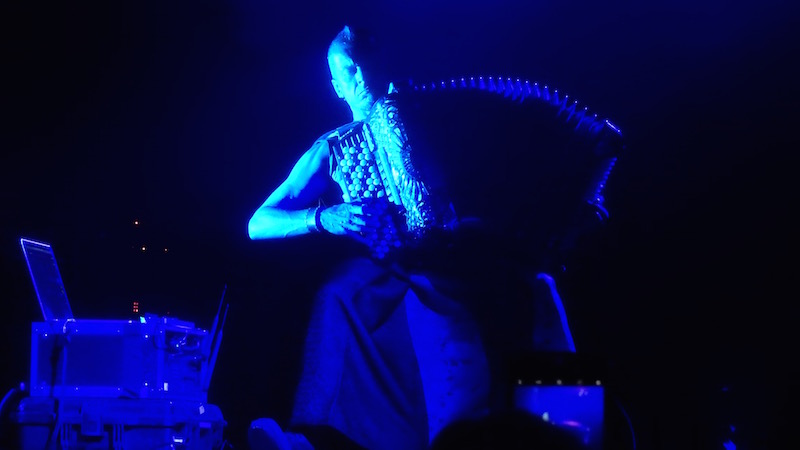 Three Box-Squeezers: One of WOMAD’s enduring favourites, Irish button accordionist Sharon Shannon exuded evident delight at returning throughout a generally up-beat Siam Tent set. Her super-tight band never slipped and the locked down arrangements of traditional and original tunes were faultlessly rendered in a performance that was all about virtuosity.

There was a similar exuberance about Basque trikitixa player Agus Barandiaran, whose dazzling finger work in the band Korrontzi was only matched by a remarkable display of tambourine playing (yes!) by Xavier Berasaluze. Their unadorned acoustic folk music, gracefully enhanced by two young dancers, snapped along in highly danceable fashion, a perfect soundtrack as we sheltered from the sun under the arboretum trees.

Finally, closing things in the Siam Tent, the powerhouse Nordic prog accordionist Kimmo Pohjonen swaggered and flexed the heavily effected instrument and leading his power trio Skin through a strangely antiquated set of riff-slamming numbers delivered with sledgehammer subtlety. Formerly a solo performer he was now joined by daughters Inka and Saana on guitar and drums respectively, the latter possessed of a fabulously terrifying thousand yard stare quite at odds with her clear chorister’s vocals. 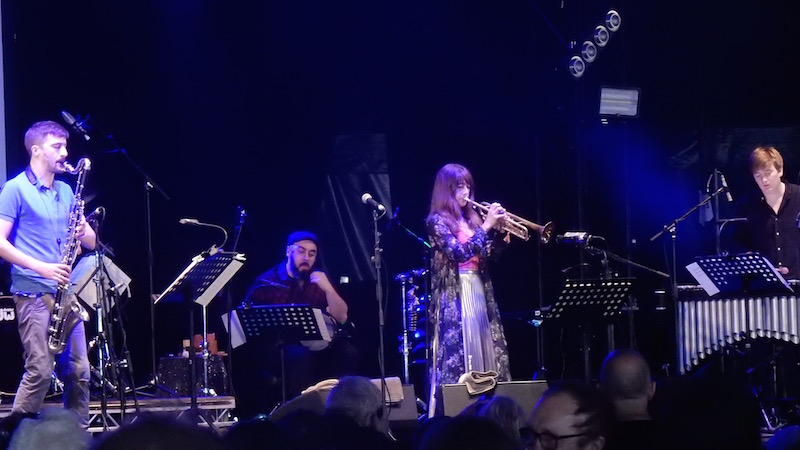 Three UK Jazz Outfits: Very much a compare and contrast thing, this, especially as you could drift straight from Ezra Collective’s Big Red Tent set into a Mammal Hands performance on the d&b Soundscape Stage. The former’s energy and fluidity had a big crowd dancing despite their often intricate compositions, the sheer vivacity of solos from Dylan Jones (trumpet) and James Mollison (sax) plus the instant groove of Koleoso brothers TJ (bass) and Femi (drums) a clear incitement perfectly judged to the audience.

The Mammal Hands audience was a much more chin-stroking gathering as befitted the piano trio’s very calculated and meticulous music. Once again it was the empathy of a pair of brothers – Jordan and Nick Smart on sax and keys respectively – that seemed to unify the sound, while drummer Jesse Barrett moved more freely through the time changes and mood swings of their music. Not a lot of dancing to be done but appreciative head-nodding could be observed.

Most befitting to WOMAD, though, was Yazz Ahmed’s Hafla Band, a talent-stuffed six-piece playing the trumpeter’s compositions inspired by her Bahraini heritage. Arabic modes and rhythms gave a distinct flavour to many of the tunes and somehow lent a particular ancient ethnicity to George Crowley’s sonorous bass clarinet, while Yazz’ emotive trumpet evoked Miles Davis in a minaret. 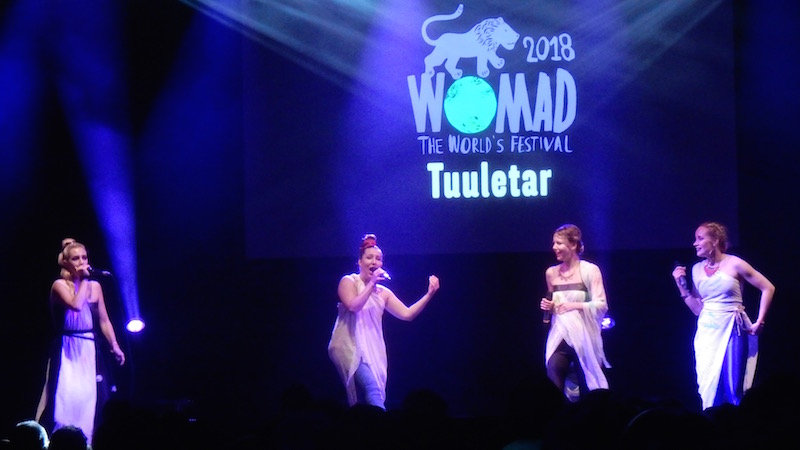 Three One-Off Acts: The coming together of ancient and modern often leads to something that is both unique yet familiar, and three acts distinguished themselves in this way. On the Ecotricity Stage the remarkable Malawian singer Gasper Nali accompanied himself on his home-made Babatoni, a rough-hewn ten-foot long one-string bass he hit with a stick while sliding with a beer bottle. It was a remarkable noise somewhere between Seasick Steve and Konono No 1, surprisingly well-fitted to his sweetly impassioned vocals, sadly cut short when the string broke and he had to rebuild the instrument on stage before finishing his set.

There was no risk of instrument failure when Finnish acappella wind goddess quartet Tuuletar appeared later, eccentrically clad in what seemed to be net curtains held together with gaffer tape. Their vocal experimentation ranged from a soundscape of a frozen forest to rapping random pages of the Finnish epic poem Kalevala, the four contrasting women’s voices sliding between raw folk and operatic clarity via shuddering sighs and beatboxing. A Bulgarian folk song was delivered with delicious accuracy before devolving into a freeform middle section that gently reassembled into the original tune to close. It was all great fun. 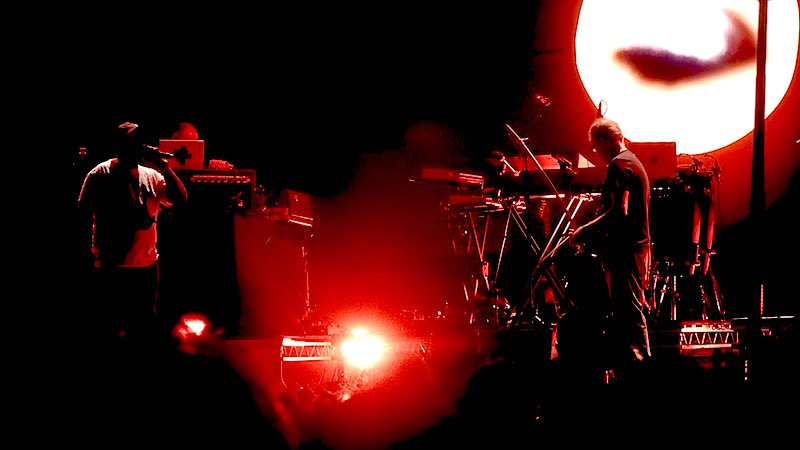 Leftfield – still into Leftism, but for the last time

Three Headliners: OK, it’s straining the theme to claim noteworthiness for a trio of headliners but it should be noted that this year’s programme seemed to have invested more in the broader range of performers with less emphasis on big names from the WOMAD back catalogue. Thursday’s bill topper Ken Booth was definitely one of those, however, and he rather milked the opportunity in MOR style, chatting with the audience and stretching out a set whose highlights included the energetic rocksteady classic Artibella and, of course, the uberschmaltzy Everything I Own (with the chorus lustily provided by the audience)

Another undeniable favourite topped things on Saturday night when Malian duo Amadou and Mariam appeared with a crackling band and showed that 30 years of performing hasn’t dimmed their wholehearted enthusiasm, whether in Mariam’s blues-tinged call and response vocals or the stinging guitar solos with which Amadou punctuated each song. Waves of love flowed from the audience throughout, warming things up after the earlier deluge.

But the headliners’ headliners had to be Leftfield, allegedly playing their seminal Leftism album live for the very last time and reminding us all quite how radical the music’s many fusions were when it appeared back in ’95. Starkly silhouetted against their striking visuals the core musical trio conjured the album’s full sound, blending four-to-the-floor techno/house beats with reggae, soul and hip-hop as a string of vocalists added the lyrics from ‘Ive got to stand and fight’ to ’How many bridges will they burn?’. With the music so ingrained in all our consciousnesses and surrounded by one of the biggest crowds in WOMAD memory it was hard to be critical – this was a kind of religious experience for many, it seemed. But, anyway, to my ears it was fine stuff that hadn’t faded with age or emulations and the thought that it was being put to rest was undeniably sad.