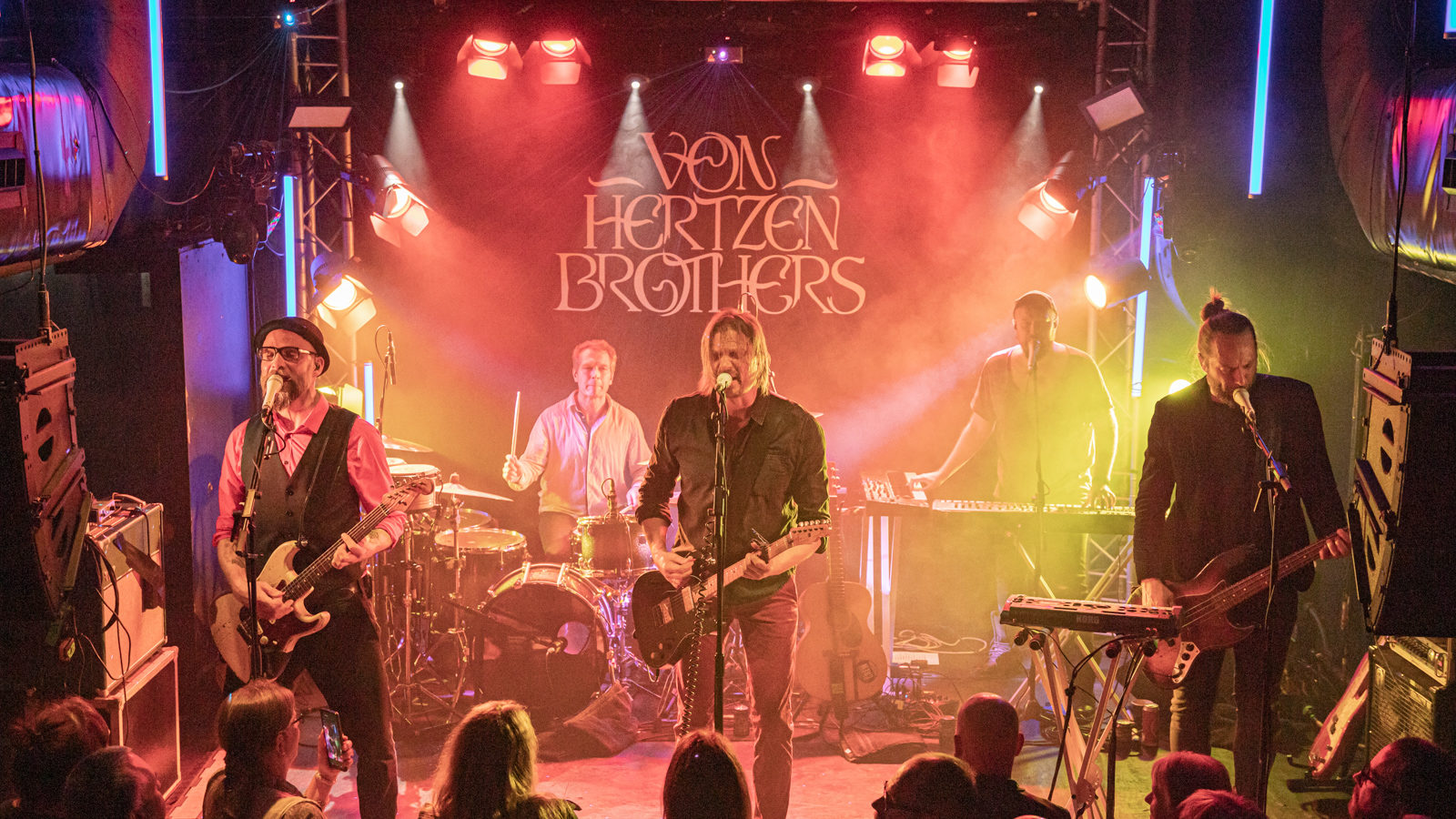 Unquestionably the most promising young band to emerge from the West Country in many a year, Newton Abbot’s very own Ethyrfield won plenty of friends when they supported Sons of Liberty at this venue in one of the earliest post-lockdown gigs. 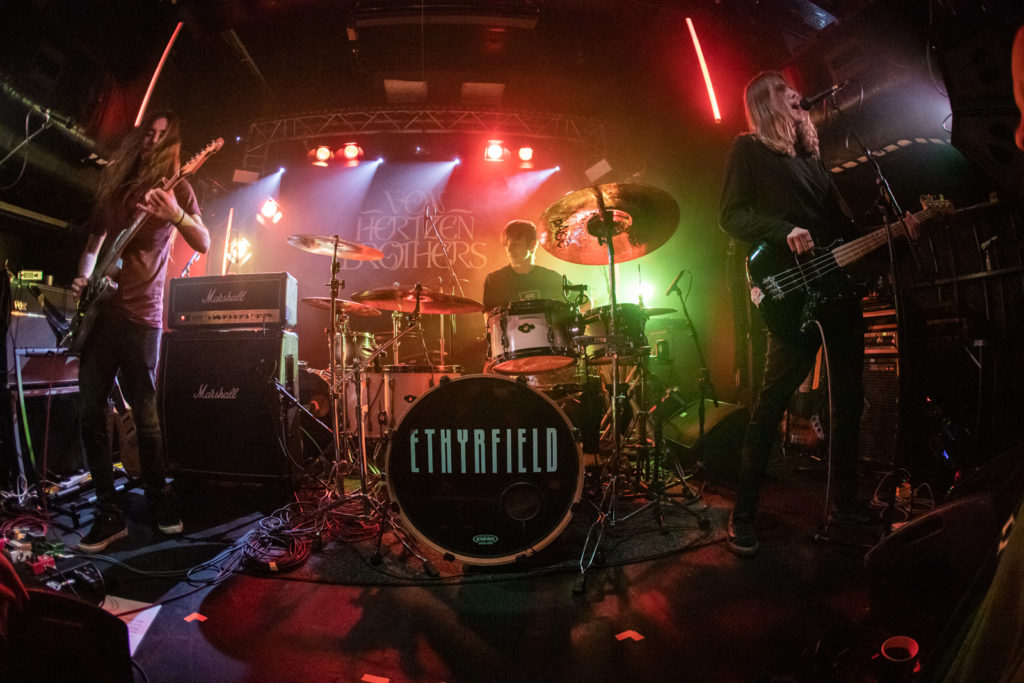 That show was a bit of a mismatch of styles, but this is the first date on their first national tour, putting the trio in front of audiences that should be even more receptive to their accomplished brand of dynamic modern prog-metal. 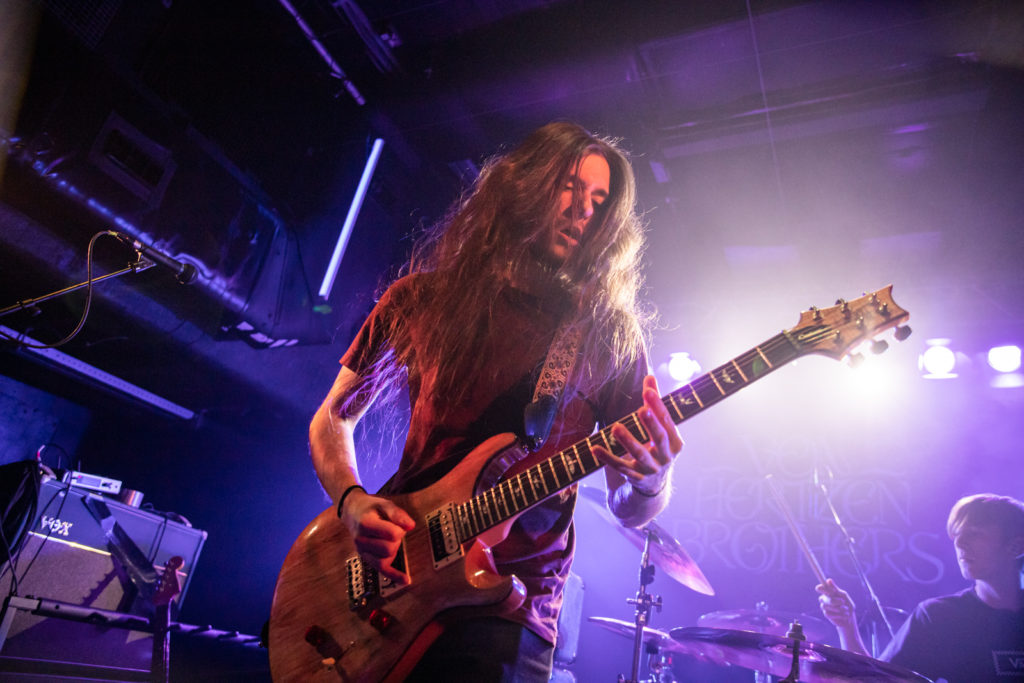 They’ve clearly been rehearsing intensively as there’s not a note out of place in Ethyrfield’s intense, uptempo 30 minute set, which showcases all their strengths. 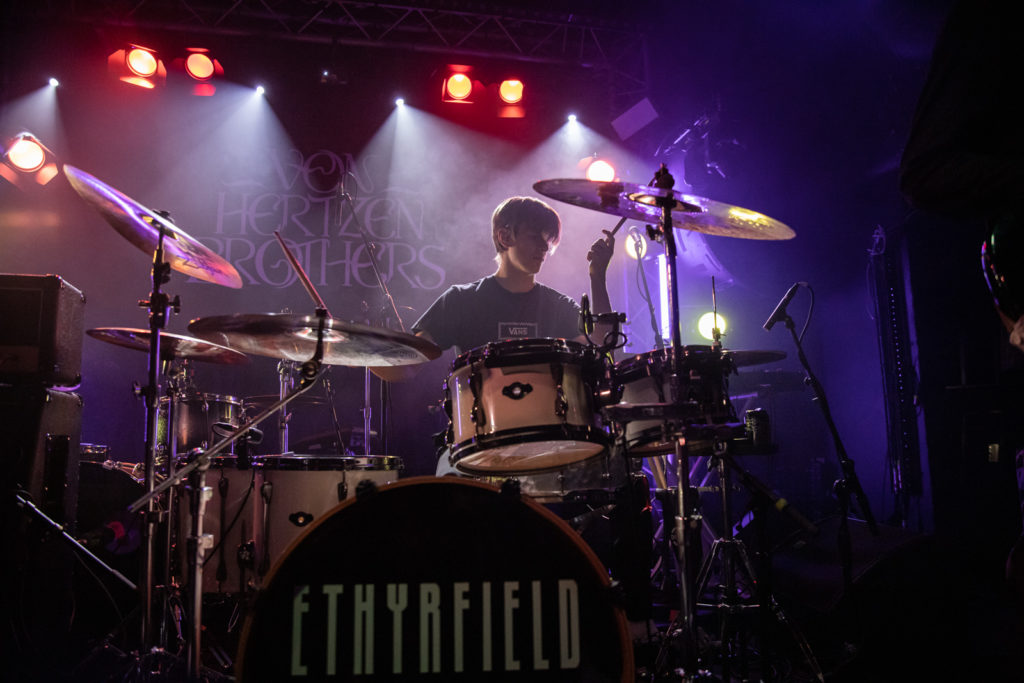 Ben Cornish is an exceptionally talented guitarist who’s able to switch effortlessly between styles, his bassist brother Zach is also an impressive school-of-Chris Cornell vocalist, and busy-yet-powerful drummer Dan Aston drives everything along at a furious pace. 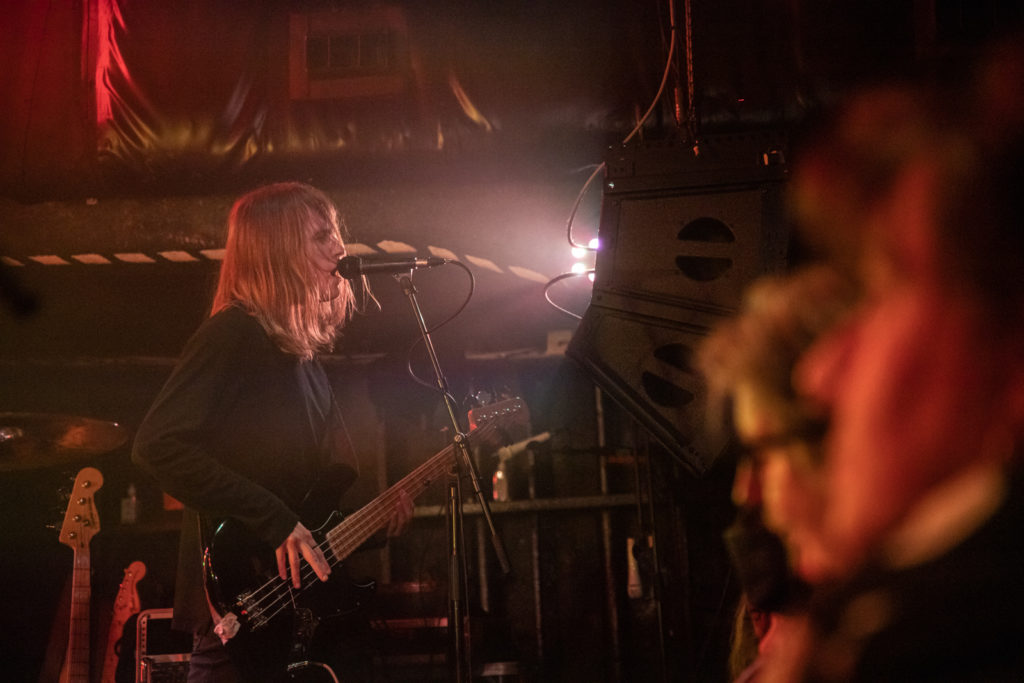 As one might expect at this stage, you can hear their many influences in the mix, but the adventurous trio are already beginning to transcend them. Sibling harmonising being the theme of the evening, their music really soars when Zach and Ben join forces. Little wonder Mikko Von Hertzen will later remark that Ethyrfield remind the headliners of their younger selves. 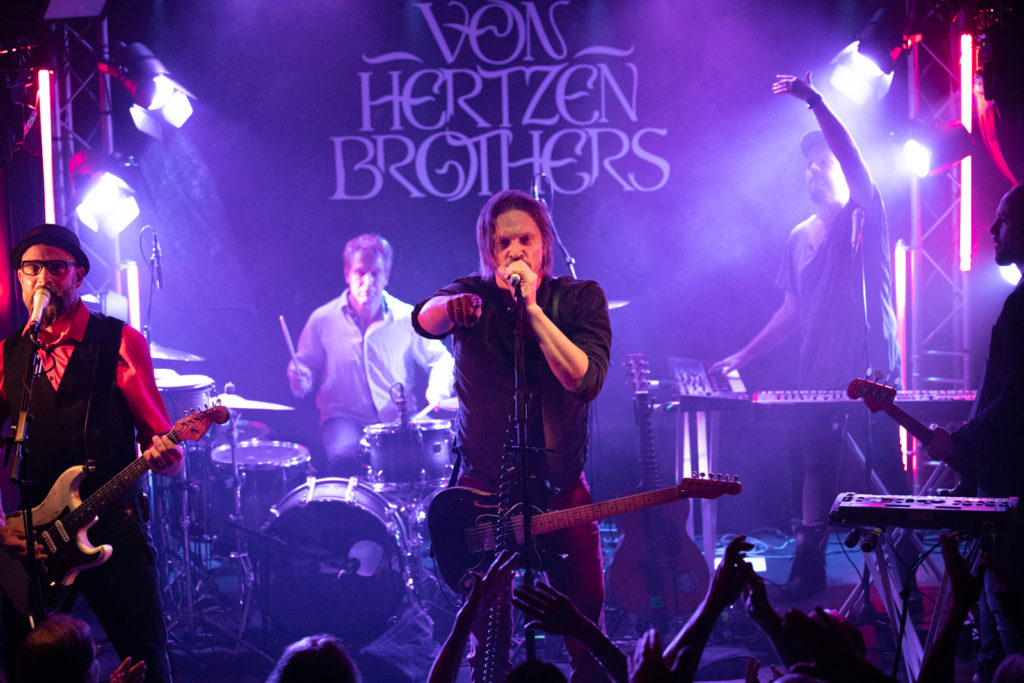 The Von Herztens flew into the UK just as Boris Johnson was travelling in the opposite direction. Could we not make this a permanent swap? The Finns can have our dissembling buffoon and we’ll have one of their finest rock bands. Seems fair to me. But if they insist on making up the numbers, they can have Liz Truss, Priti Patel, Michael Gove and Nadine Dorries too. 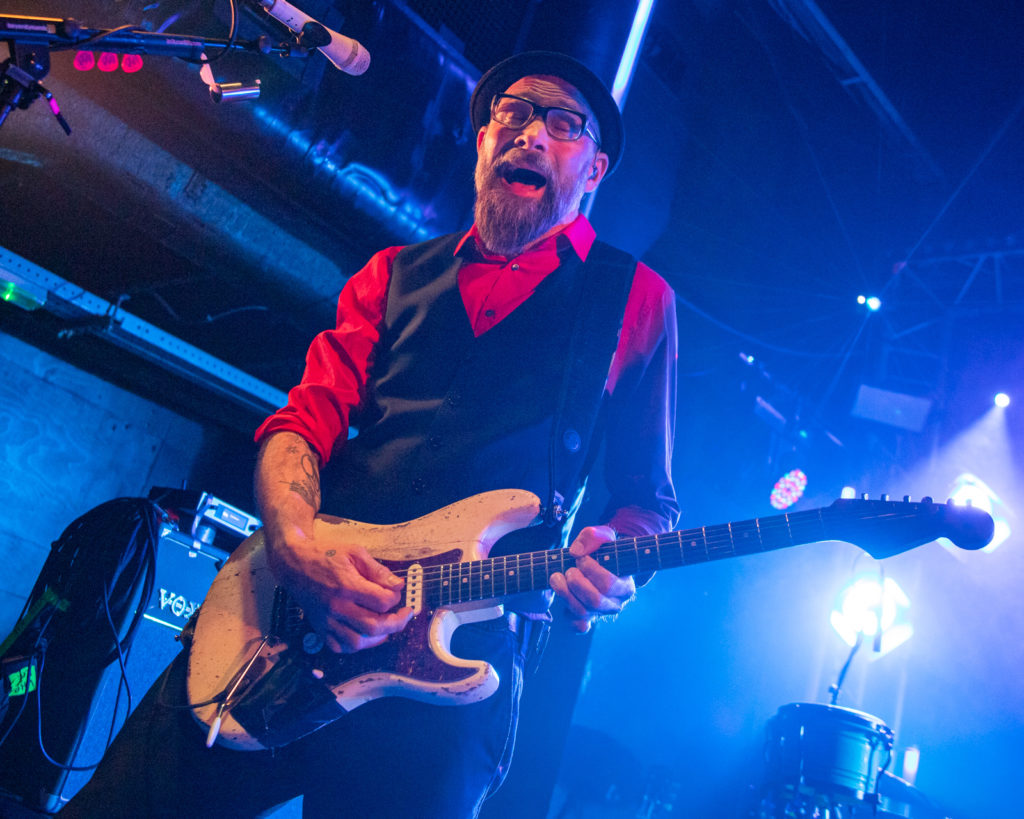 Big fishes in the small pond of Finnish music, the Von Hertzens’ albums frequently top their national charts and the band’s latest, Red Alert in the Blue Forest, entered at number two. Mysteriously, they’ve failed to make a well-deserved breakthough elsewhere in Europe, despite touring for more than a decade, giving them the feel of a well-kept secret whose wildly enthusiastic audience can scarcely believe their luck in witnessing an arena-sized show on a cosy boat. And the sound is absolutely huge, with those gorgeous four-part vocal harmonies layered on top of two guitars and two sets of keyboards. Hell, Kie even breaks out the mandolin at one point. 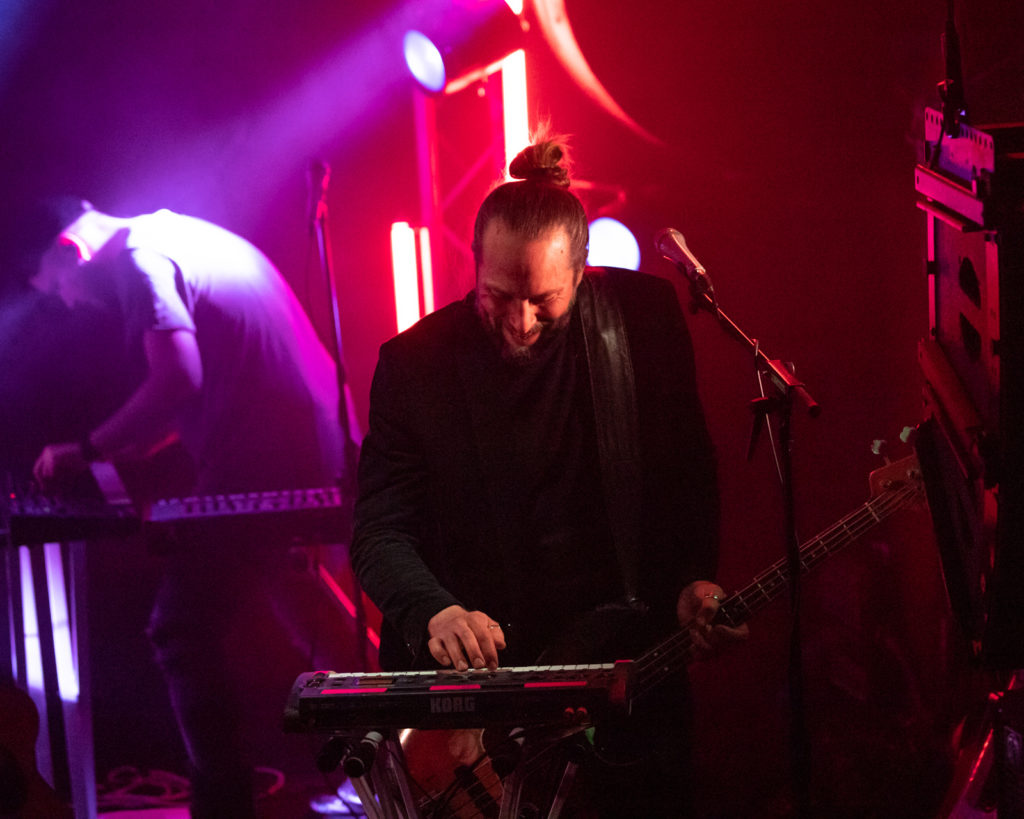 Red Alert . . . has been acknowledged by most of those who bothered to review it as one of the finest releases of 2022, so it’s little wonder that the Von Hertzens are eager to celebrate this magnificent return to their proggy roots, scattering the album’s first five songs throughout the set, which opens with the double whammy of Day of Reckoning and Blue Forest. 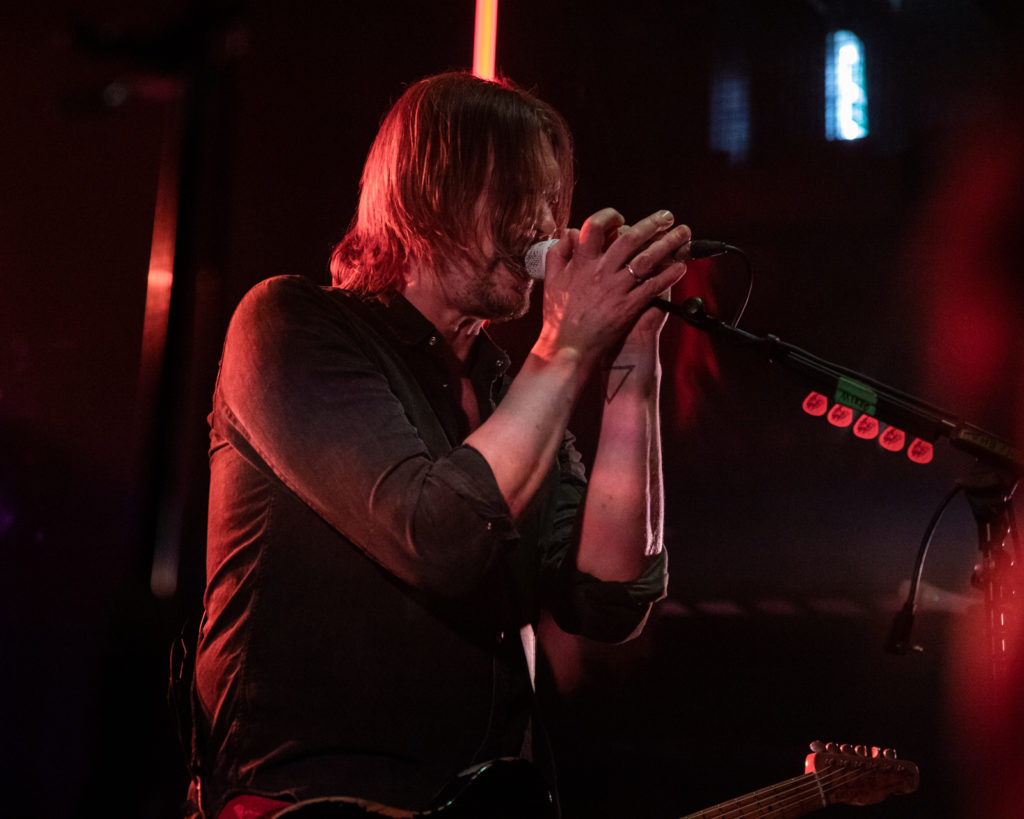 Drummer Sami Kuoppamäki and keyboard player Robert Engstrand are tucked away at the back, with the Von Hertzens – Kie, Mikko and Jonne – ranged across the front of the stage. And they all seem genuinely delighted to have risen at 2:30am to make their way from frozen Helsinki to rainy Bristol, not least because this noisy, boisterous crowd is equally genuinely delighted to see them again. 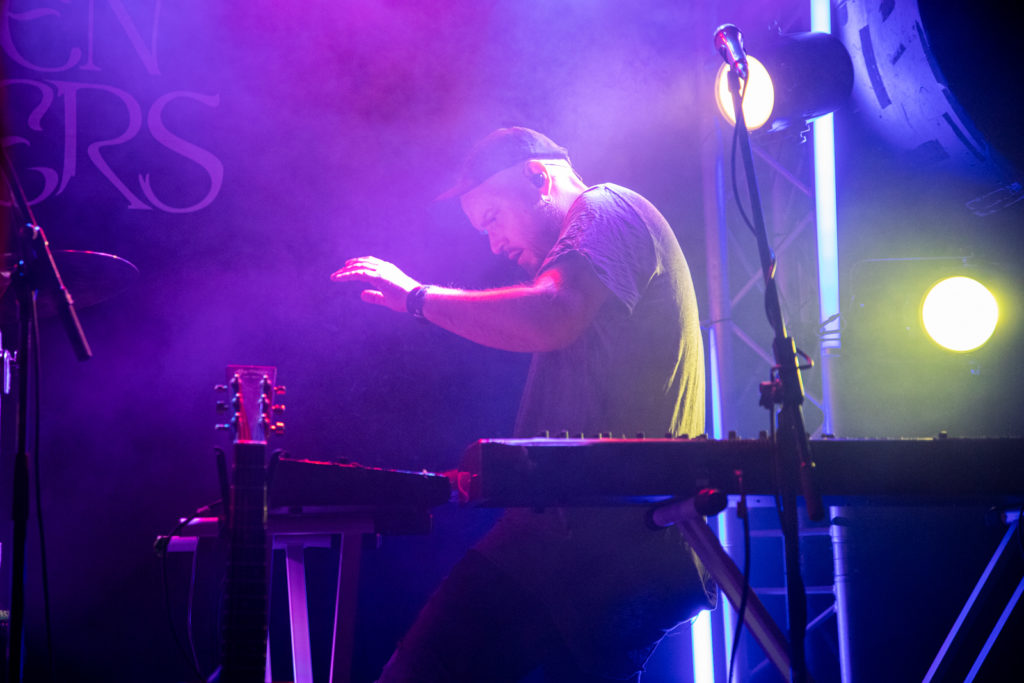 The Von Hertzens’ diversity tends to confound pigeonholers, and may indeed have harmed their career. When they delve into the catalogue for those shorter, punchy songs such as the propulsive Coming Home (with Kie on lead vocals), You Don’t Know My Name, the gargantuan Flowers and Rust and the big crowd participation number Sunday Child, it’s easy to imagine those armies of Foo Fighters fans singing along. 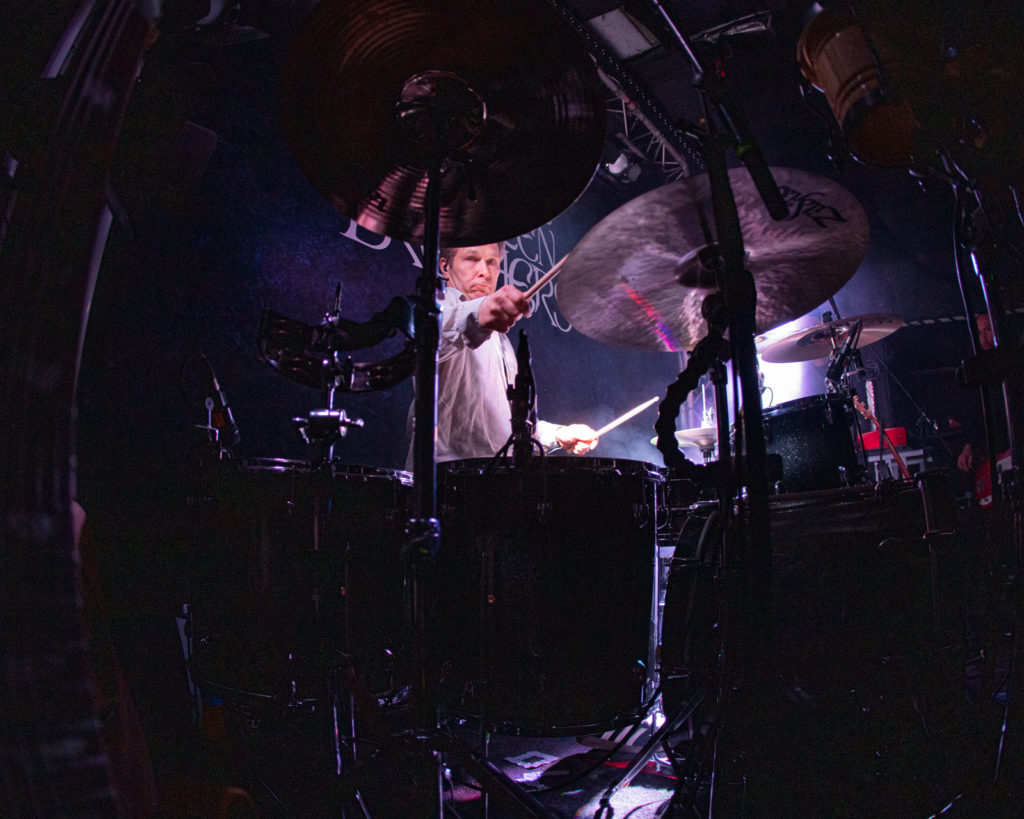 As for the prog, they return to Jerusalem, their most overtly political song and the stand-out from 2017’s unfortunately titled War Is Over (“We had no idea what was round the corner,” says Mikko, ruefully), but it’s the remaining trio from Red Alert . . . that really stand out. The beautiful All of a Sudden, You’re Gone would surely be a hit single if seven-and-a-half minute songs were ever played on the radio. The partly acoustic The Promise delves deep into folk territory and even threatens to turn into the Incredible String Band at one point. And the album’s big epic, Peace Patrol (no change from ten minutes here), proves a suitably breathtaking set-closer, climaxing with Mikko holding his guitar aloft while bathing in the applause. 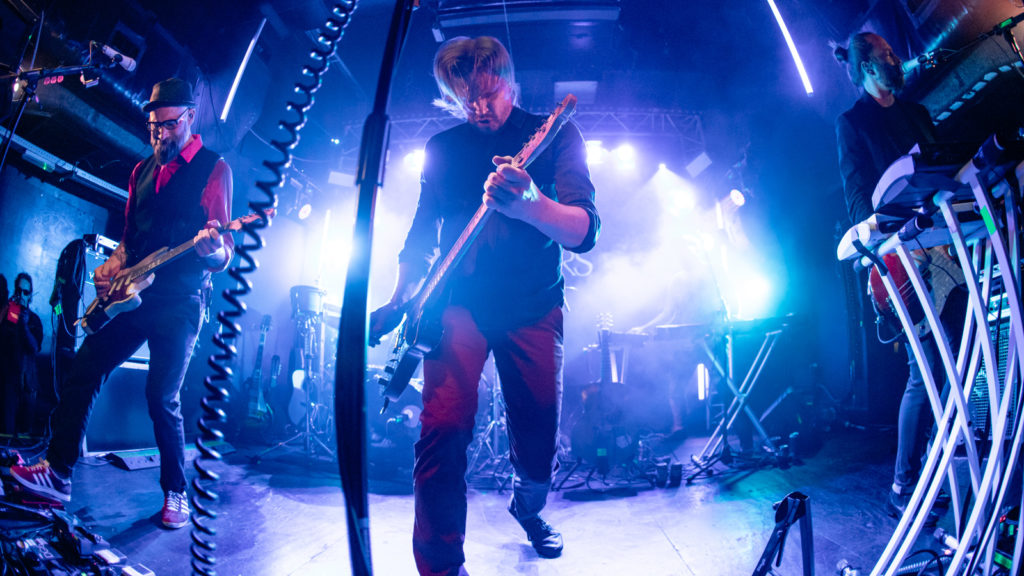 Naturally, they’re back for a triumphant New Day Rising that leaves the crowd exhilarated and drained. Their upward momentum in this country may be slow and steady rather than meteoric, but the USP remains unchanged: come for those fabulous vocal harmonies, stay for the boundary-defying prog.