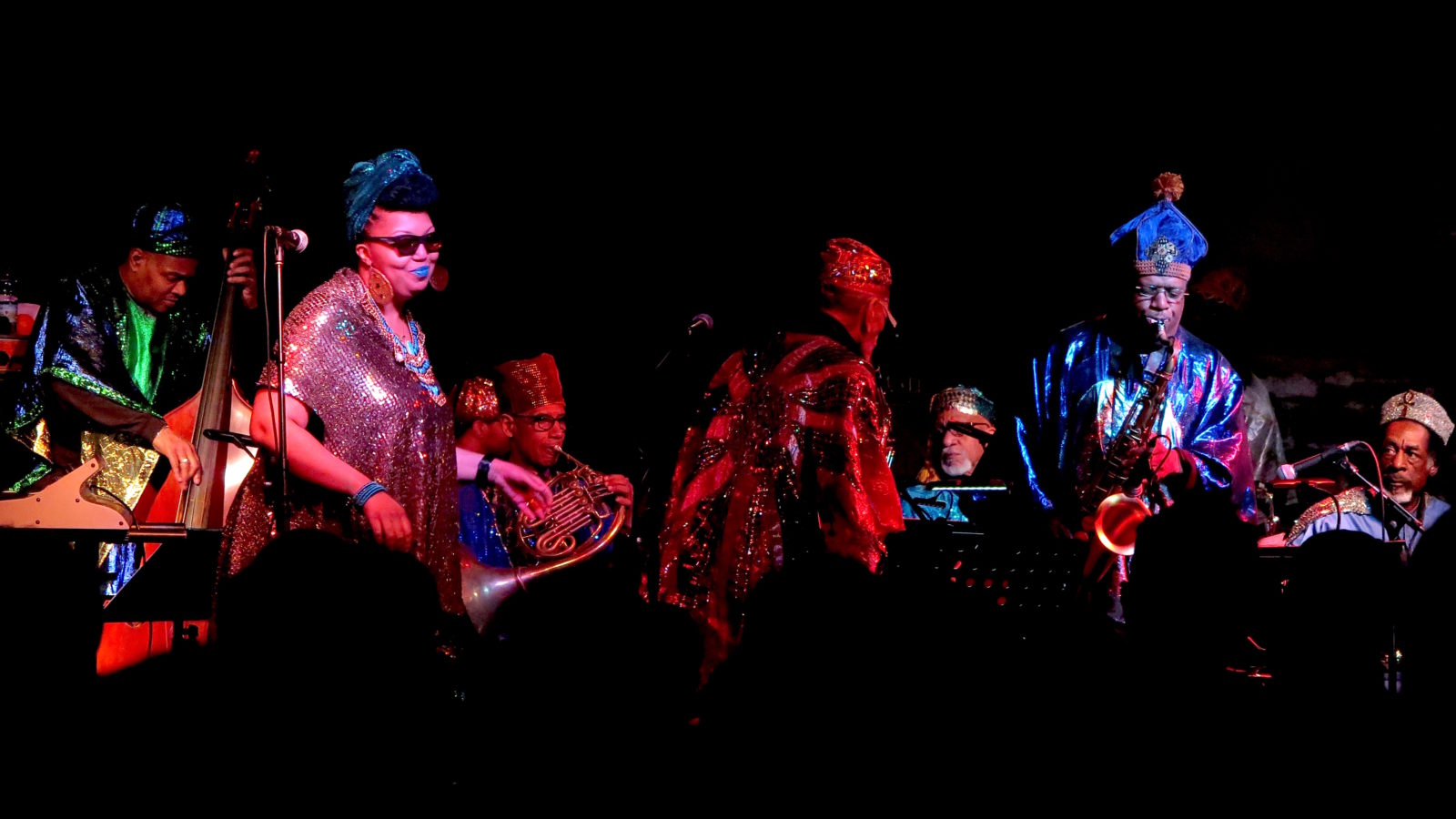 It’s easy to be charmed by this venerable collective in their spangly suits, capes and hats. It could be equally easy to mock songs like Have You Heard The News From Neptune or Take A Journey To Saturn, each with its classic swing arrangement but that would be wrong. As delivered by vocalist Tara Middleton such cosmic lyrics have the easy sincerity of a Peggy Lee love song and those arrangements the careful intelligence of an Ellington chart. 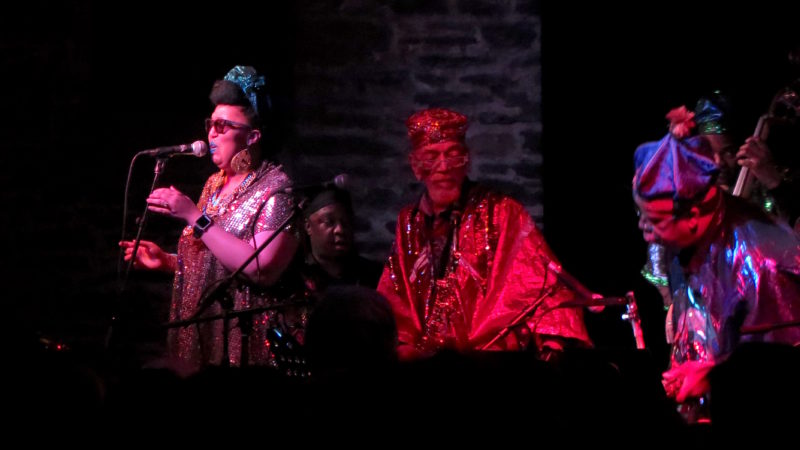 From the minute the singer opens proceedings with the announcement ‘Calling Planet Earth’ there is a captivating magic about the Sun Ra Arkestra that demands you suspend disbelief and abandon yourself to them. The reward is a journey (intergalactic or otherwise) through their collective imagination and the originating vision of their ‘ascended’ founder. While they have absolute respect for the conventions of jazz, be it classic swing, modal groove or New Orleans blues, they are also always ready to change the context of the tradition. 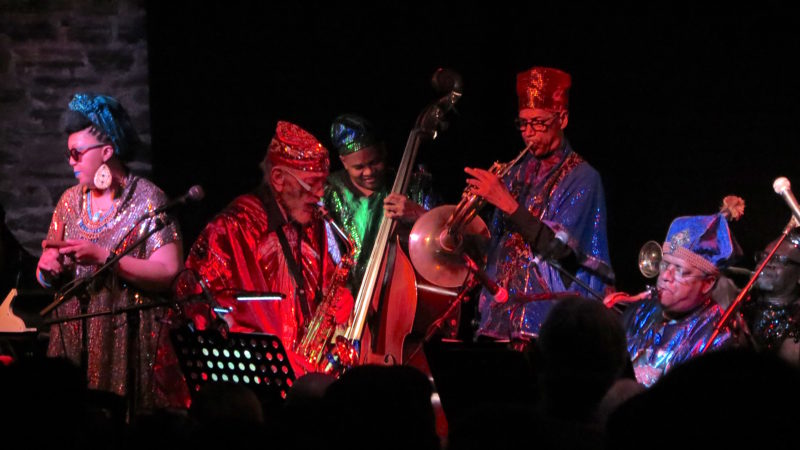 Thus Lion Of The Heavens began with a lush brass ensemble then slid into a classic swing beat for the vocal before a rich-toned French horn solo from Vincent Chancey. So far, so predictable (and so well done, too) yet bandleader Marshall Allen felt able to punctuate the song with free jazz squirts of alto sax, giving an odd dislocation that doesn’t actually derail the tune. Similarly, throughout Vibrations From An Asteroid the trumpet, French horn and tenor sax each introduced a touch of deliberate oddness within their solo stints. 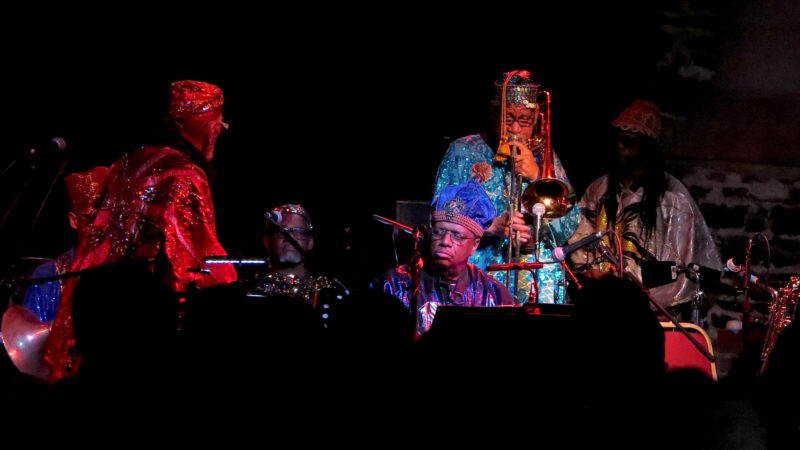 When a classic tune emerged it always had the band’s signature on it, as for the brisk cha-cha of Stranger In Paradise or the sleazy New Orleans swoon of Come See About Me. That blues number was a peach – from the plangent Mingus-style solo bass opening to the slinky bar-room swing of it, embellished with a fat trombone solo and rootling baritone sax. The vocal poise and embracing smile of the blue-lipped singer slid through the song and it felt as though, rather than playing from a well-written chart, each musician simply knew what went where. As with so much of the evening, it felt perfect. 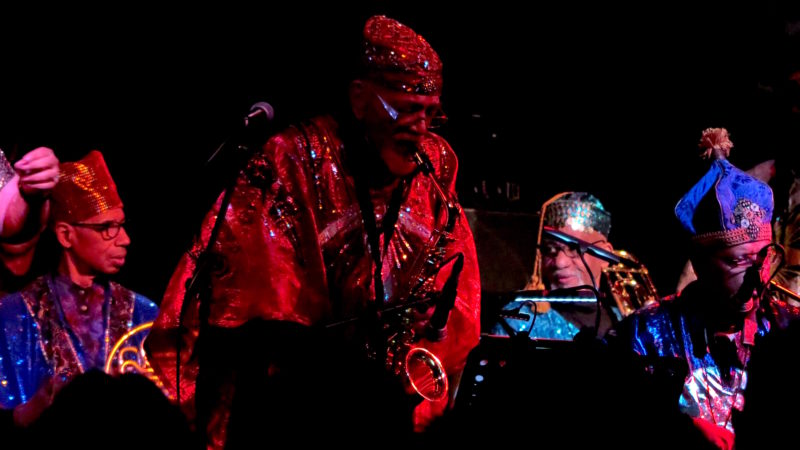 Much has been said about Marshall Allen’s age – he’s 95 this year – and it did seem that he was maybe a little less agile than previously. His playing was fine, however, and his role in the band as pivotal as ever – evidenced by his look of concentrated gravity throughout. It was only once the band had left the stage, playing as they went, and he and Tara finished singing We Travel The Spaceways to tumultuous final applause that he allowed himself the big grin that would let the spell be broken.