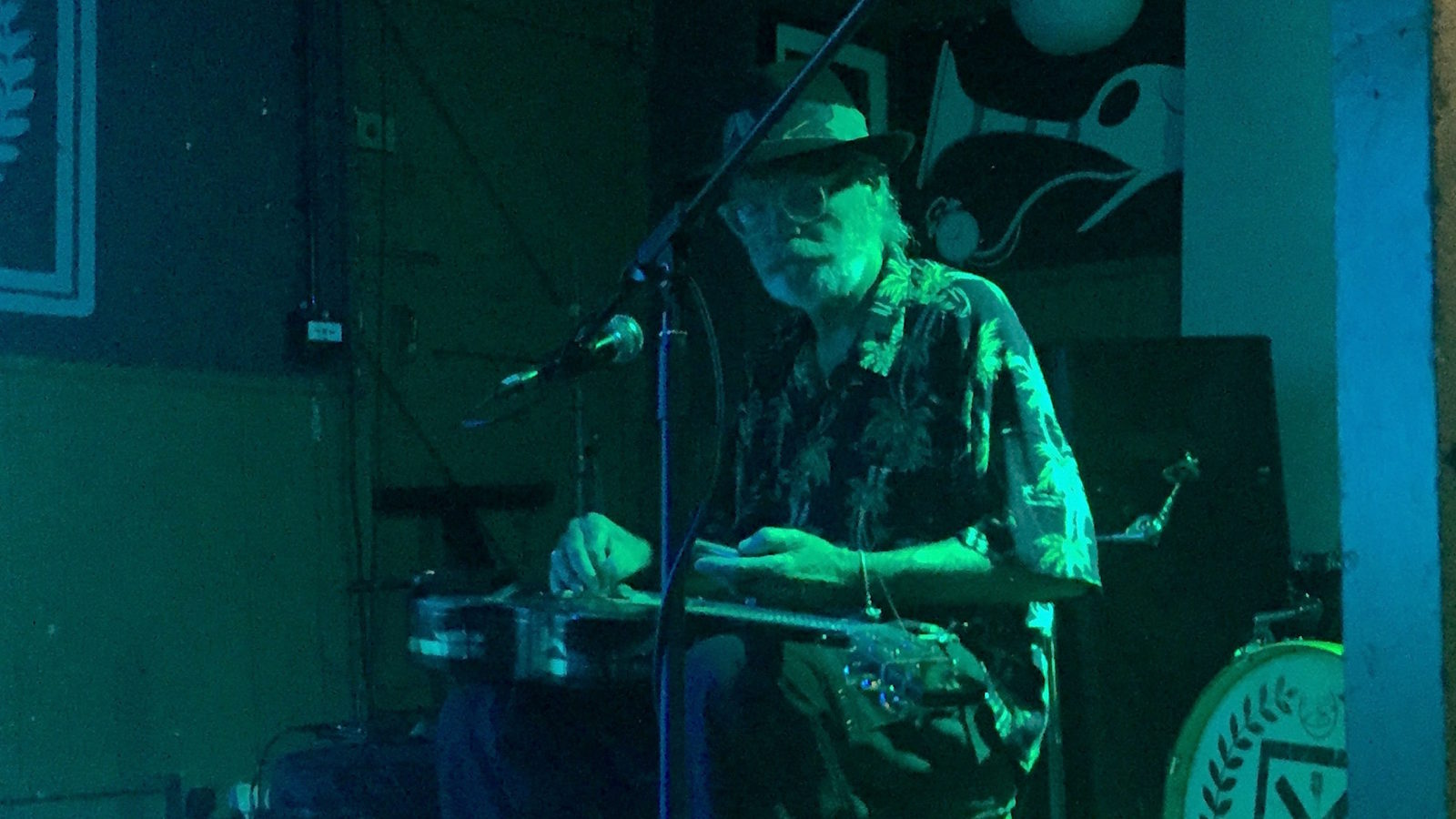 Well, whatever intentional irony there was in calling these nights Improv’s Greatest Hits the arrival of guitarist Mike Cooper is kind of appropriate. One of the key figures in Bristol’s Troubadour folk club in the 60s Mike became one of the country’s finest blues guitarists. He also went on to explore free jazz and spontaneous composition, however, and was at the heart of London’s 80s improvised music scene.. As an early adopter of electronic effects and ‘found sound’ he has developed a free-flowing solo performance style that is recognised as both highly skilled and distinctive. He truly is one of Improv’s Greatest Hits, therefore, and the appearance of a fair few grizzled musical veterans in the Old England’s shadowy back room audience reflected the importance of the occasion. 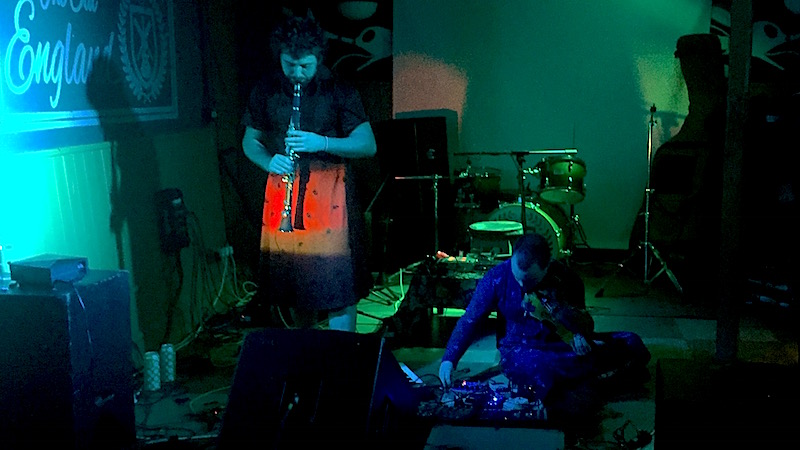 But first … the elegantly frocked Shitghost duo launched an industrial drone, hurling soprano sax and violin into a floor covering of pedals, crouching and twiddling to wrestle the sound into shapes. Odd semi-choral refrains emerged, or outraged whale voices as they skied downhill with the sonic flow. By contrast the Lust Rollers emphasised acoustic sound, wrangling soprano sax with sundry ‘percussion’ and creating unexpected textures – sudden bell like tones, or the rushing shushing of a man wrapping himself in tin foil. At one point party squeakers were tossed out among the audience. Their performance was breathless, never running out of sound or ideas, and ended with a roar (not a whimper). 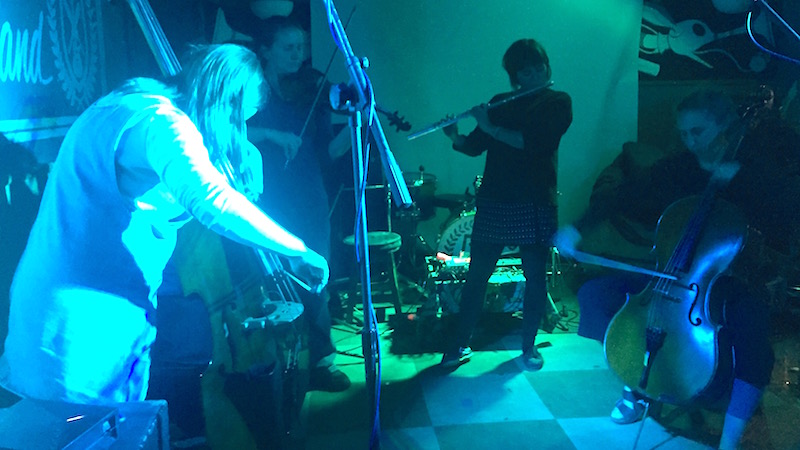 The cello case beside Halftone had the word ‘FRAGILE” emphatically scrawled over it many times, and the paradox between the assertive tone and the meaning of the word was also inherent in their semi-classical acoustic music. Playing flute, violin, cello and double bass their tone and harmonies recalled 20th century modernists like Messaien (and his use of fluttering birdsong was often echoed, too), but the clarity of improvised ideas was evident. While holding to a very collective sound individual players could let their voice emerge strongly knowing the others would quickly gather round and embellish or develop a mood or melodic fragment. They also all had a fine judgement about when to not play, leaving understated moments and quiet tableaux to hold our attention before moving on. 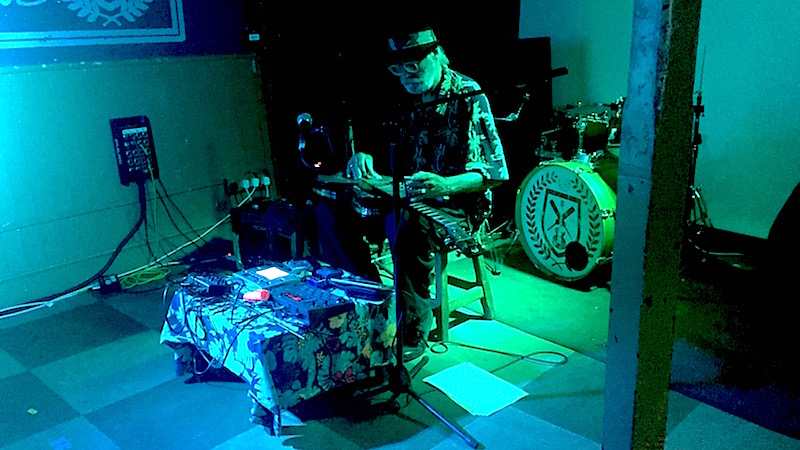 Mike Cooper – nothing out of place or effortful

But then there was Mike Cooper, hat-shadowed face, Hawaiian shirt and a steel guitar wired into a table of electronic business. He began raga-like, an unhurried deconstructed blues-boogie, his fingers nimble across the gadgets stretching and overdriving the sound, letting new elements evolve before sweeping them aside and derailing the music into something else. Grabbing a lyric sheet from a pile on the floor he delivered songs like The White Ship’s Silence, moulding the soundscape to fit them into what was a single stream of consciousness. It was a truly riveting performance, so much was happening so fast at times, yet nothing out of place or effortful. It was never far from the blues either, though he somehow never exactly got there until the end and a straight slide-guitar accompaniment to Van Dyke Parks song Movies Is Magic. It is great that a new generation is developing free music and deploying the technology of our times to do it, making it all the more important to recognise a master musician like Mike Cooper who has spent nearly forty years doing just that and remaining ahead of the curve.