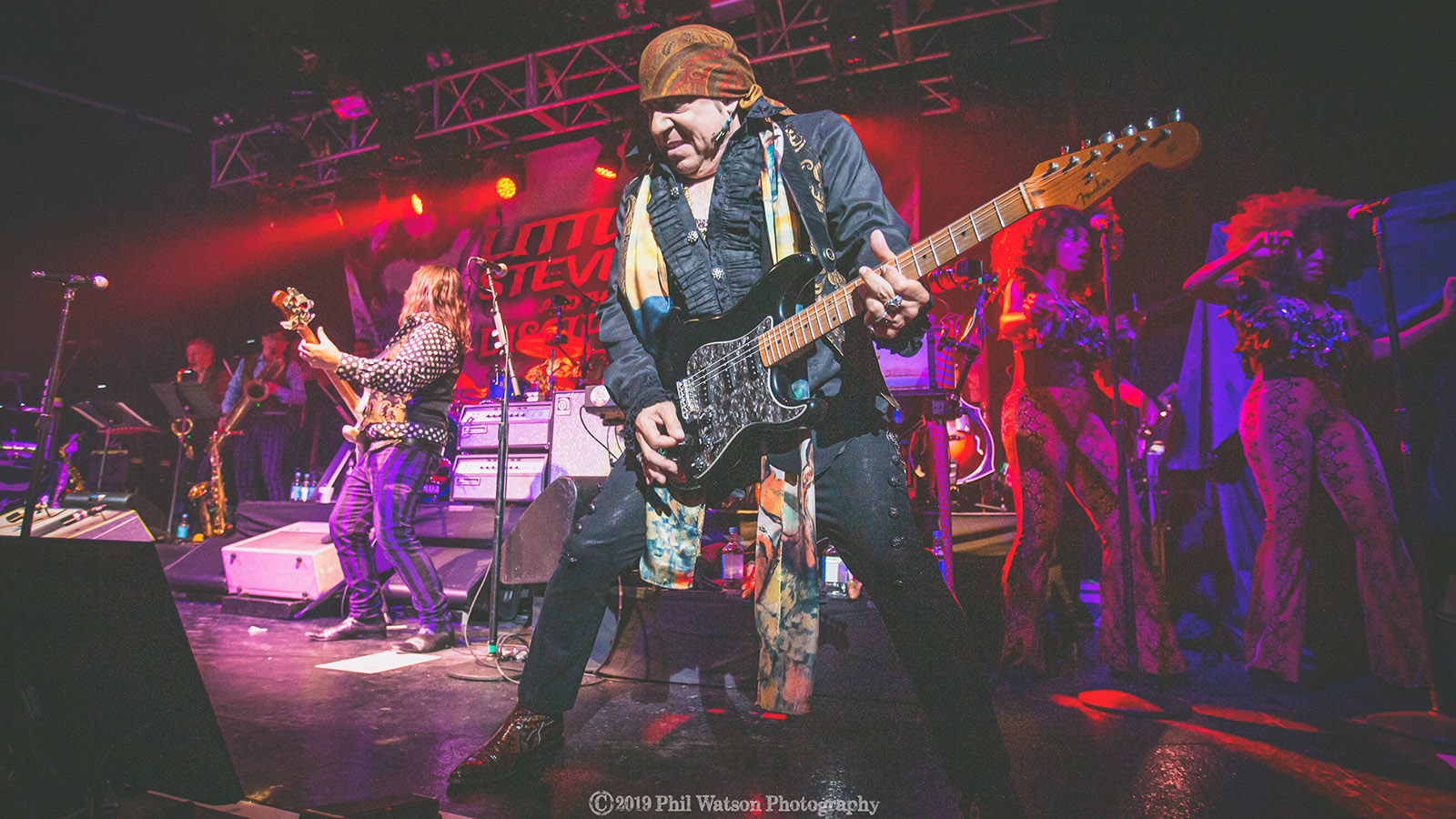 Little Steven was the nexus of an uplifting, genre busting, hip pushing, foot punishing, heart-warming two and half hour mash up of R‘n’B, soul, reggae, blues, rock and sundry mambos, spritzed up with a dash of cha-cha-cha and enlivened by scorching guitars. He was ground zero for a visual explosion of paisley & polka dot; matching strides & waistcoats, and titfers to grace every Blaxploitation film ever made, along with afros so large they probably have their own gravity fields. Oh, and umbrellas. Supercallfragifunkydocious umbrellas. And the Disciples of Soul? Imagine the Wrecking Crew paying tribute to Sly & the Family Stone, their playing so tight, so in the pocket even James Brown couldn’t complain, yet loose as a psychedelic goose. 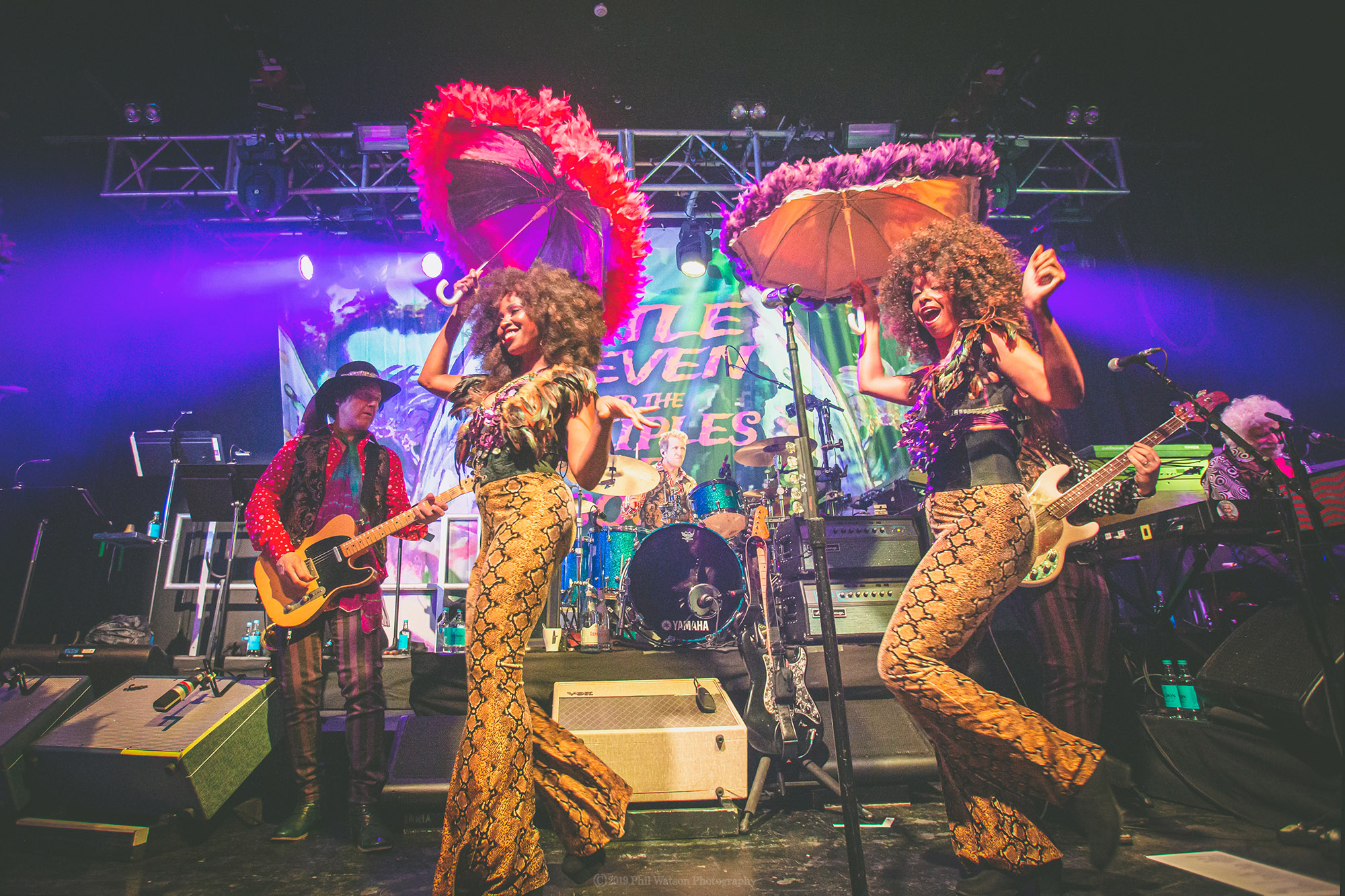 The current tour is based around their latest album Summer of Sorcery, the first release in 20 years, and the band played the whole big, damn beautiful thing mixed in with a judicious mix of Little Steven tunes; earlier Disciples material and a hat trick of tunes written specifically for Southside Johnny. Oh, and one pounding geographically themed cover. 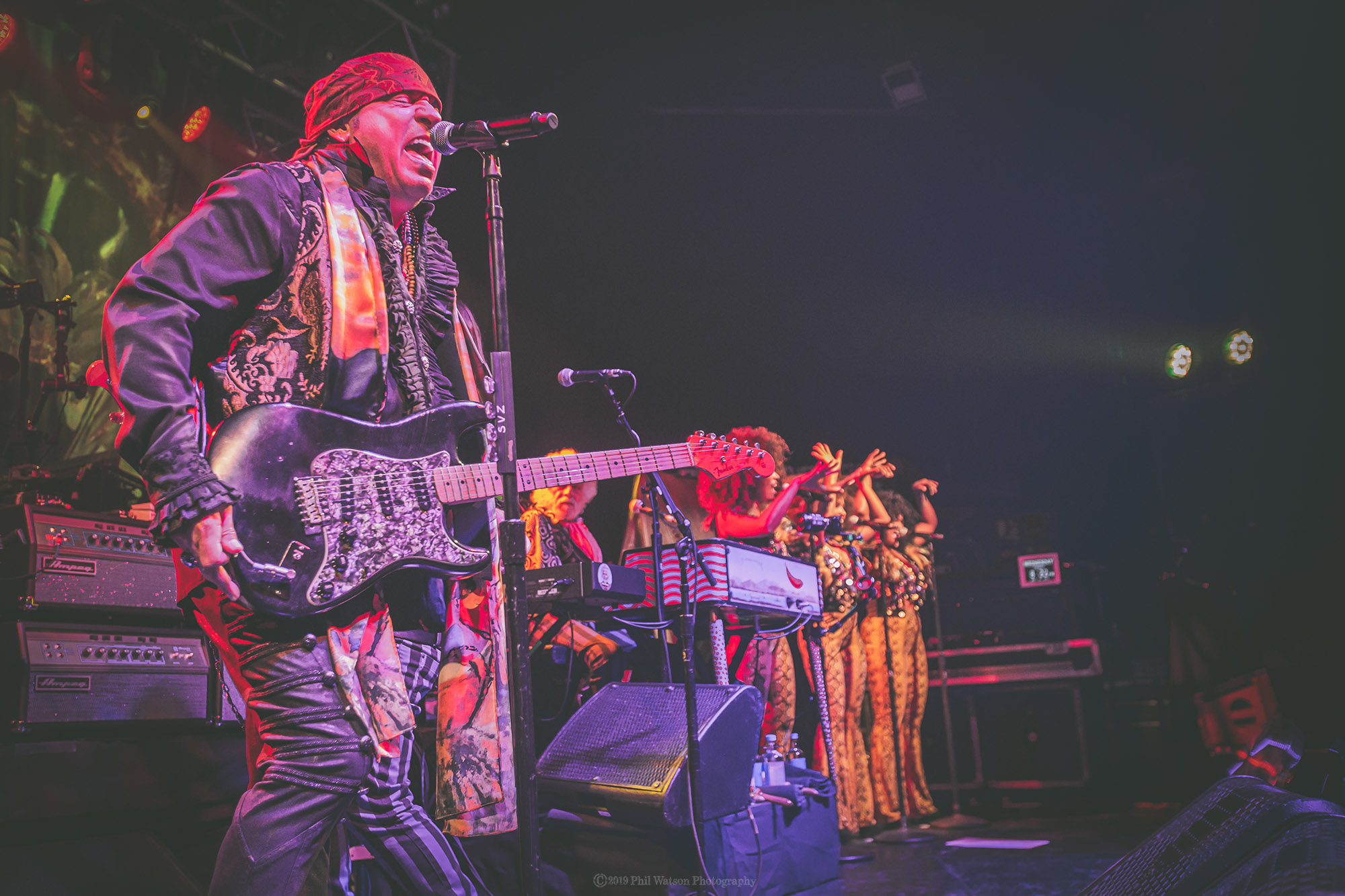 Communion opened proceedings, a version played with the passion, power and pleasure of a band closing rather than opening a triumphant set, followed by Camouflage of Righteousness, lyrics sadly as relevant now as they were twenty years ago. Party Mambo! was, well, a party mambo, virtually every Disciple taking a solo, enhancing the song rather than dominating it, the band never losing the fearless, relentless groove. 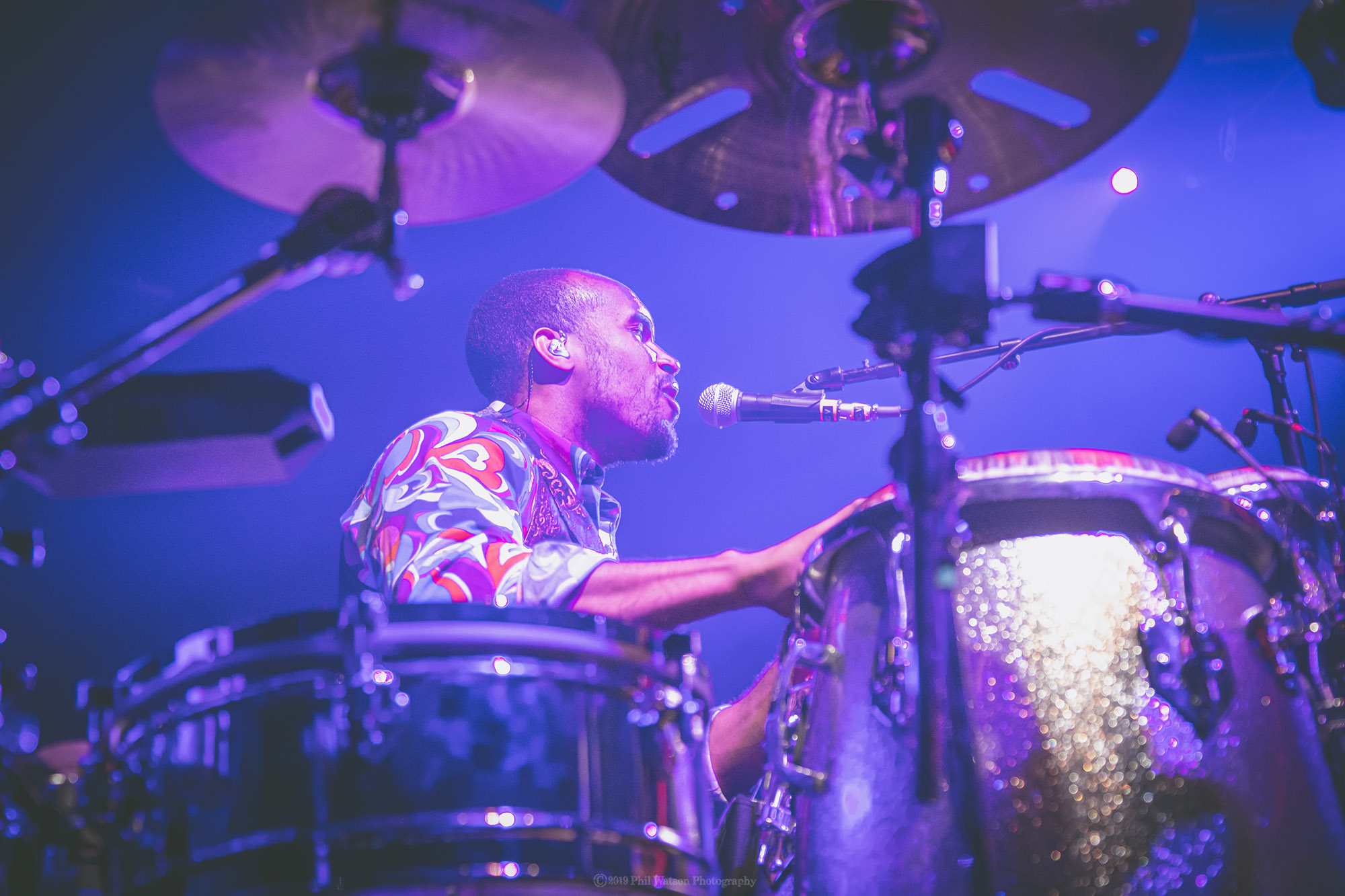 Three songs in and, one at a time, the whole band introduced their manifesto: their desire to take the whole crowd to a mythical summer, a summer free from concerns and packed with music and sweet, sweet childhood memories. A place full of characters – some damaged, some fragile and some cured, but all reflecting aspects we’d recognise in our own lives. And that’s exactly what they did, starting with a swoonsome Love Again. 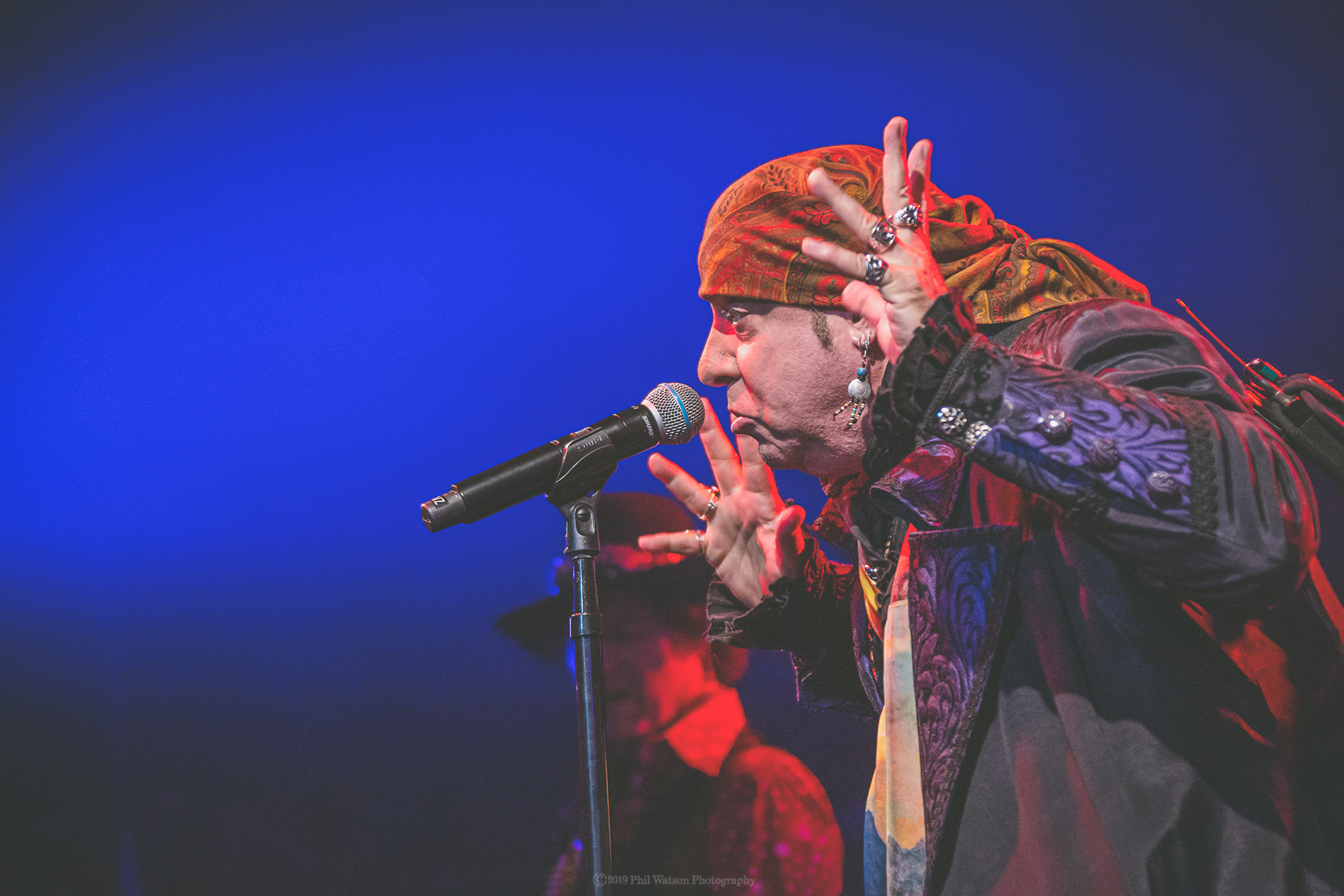 The musicianship was exemplary throughout, every one of the Disciples clearly a master of their instrument and yet never showboating. Each in the right place at the right time – all in service of the songs. Visual too, so visual. The backing trio were a constant blur of dancing (synchronised and freestyle) and never dropped a note, never missed a cue. They brought the soul, shaking their booty, just the right side of salacious yet sanctified too. Stage right a murmuration of horn players took us to the glory days of Stax & Atlantic, they took us south of the Border with brassy percussive stabs. And on Vortex, brought Shaft and his fellow travellers to the party. They were encouraged to step forward for countless pin sharp solos that never outstayed their welcome. 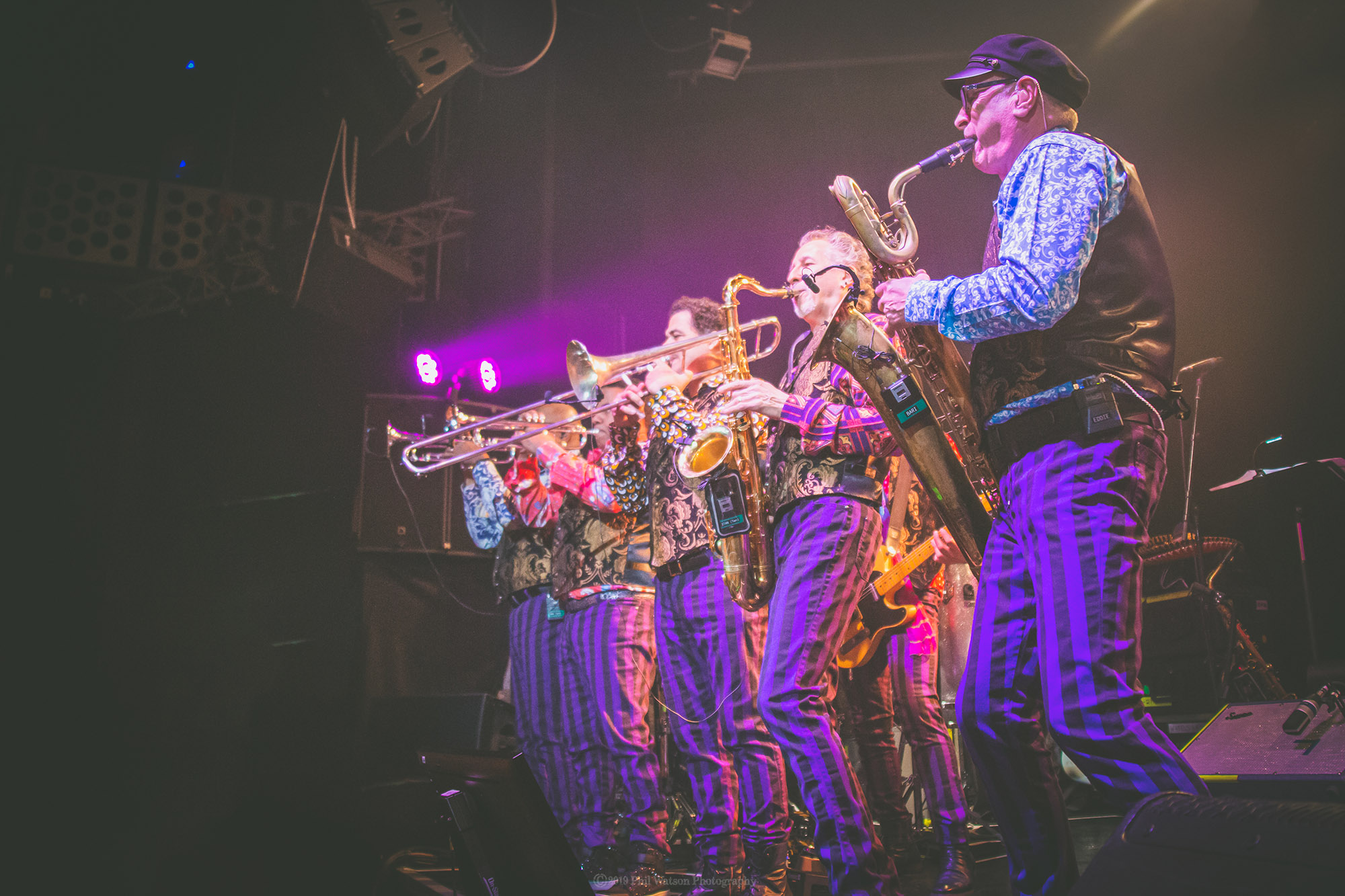 The tunes covered the glory days of rock and soul: songs in thrall to doo-wop, to rhythm n blues (and the blues itself) and to da funk. There were delightful detours into South America too, all of the above without jarring genre clashes and no pastiches or plagiarism. Some tunes clearly played tribute to the glory days of popular music: Little Girl So Fine lovingly evoked the Drifters, A World of Our Own opened with that drum beat from Be My Baby (Hal Blaine RIP). But there were also some audacious twists too, notably the screaming guitar solo over the tom-to freak out during Los Desaparecidos. 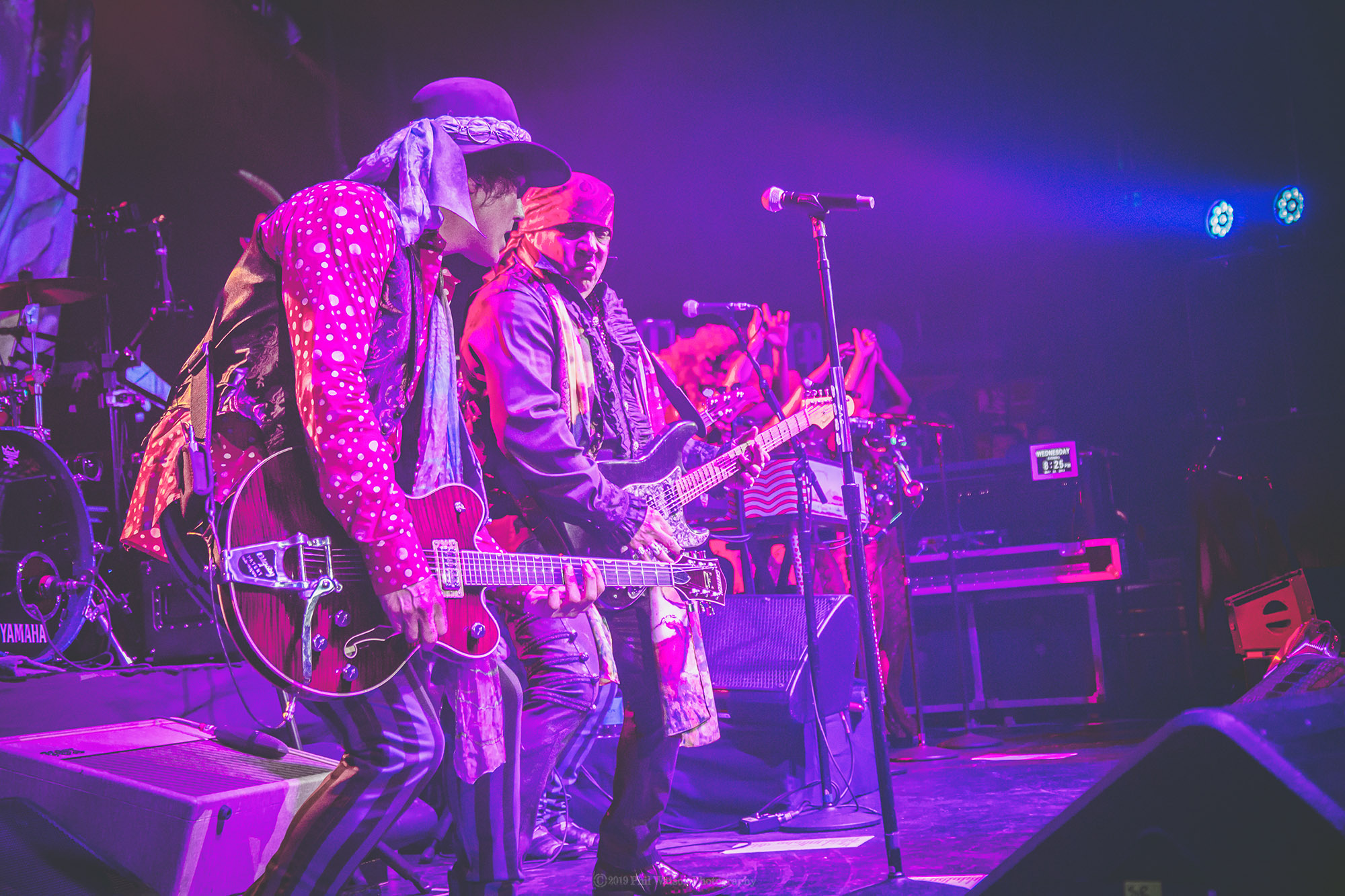 Although it’s his name on the tickets and merch, Little Steven was a gracious band leader – all the Disciples got to shine, and he surrendered plenty of lead guitar (but oh boy, did he scorch when he strapped on his axe); and the guitar duets scorched too. He was the most gnomic consigliere ever: his introduction to On Sir Francis Drake effortlessly linking said, ahem, explorer to the Beach Boys. (Obviously SFD discovered California and without that discovery no LA; without LA, no Beach Boys, without the Beach Boys…no summer). He also waxed lyrical about girls & music; girls & friendship; girls & those glorious teen years and girls & the importance of education. And above all he pleaded the case for understanding and love; assuring all that the current shitstorm of bigoty and ignorance would end. 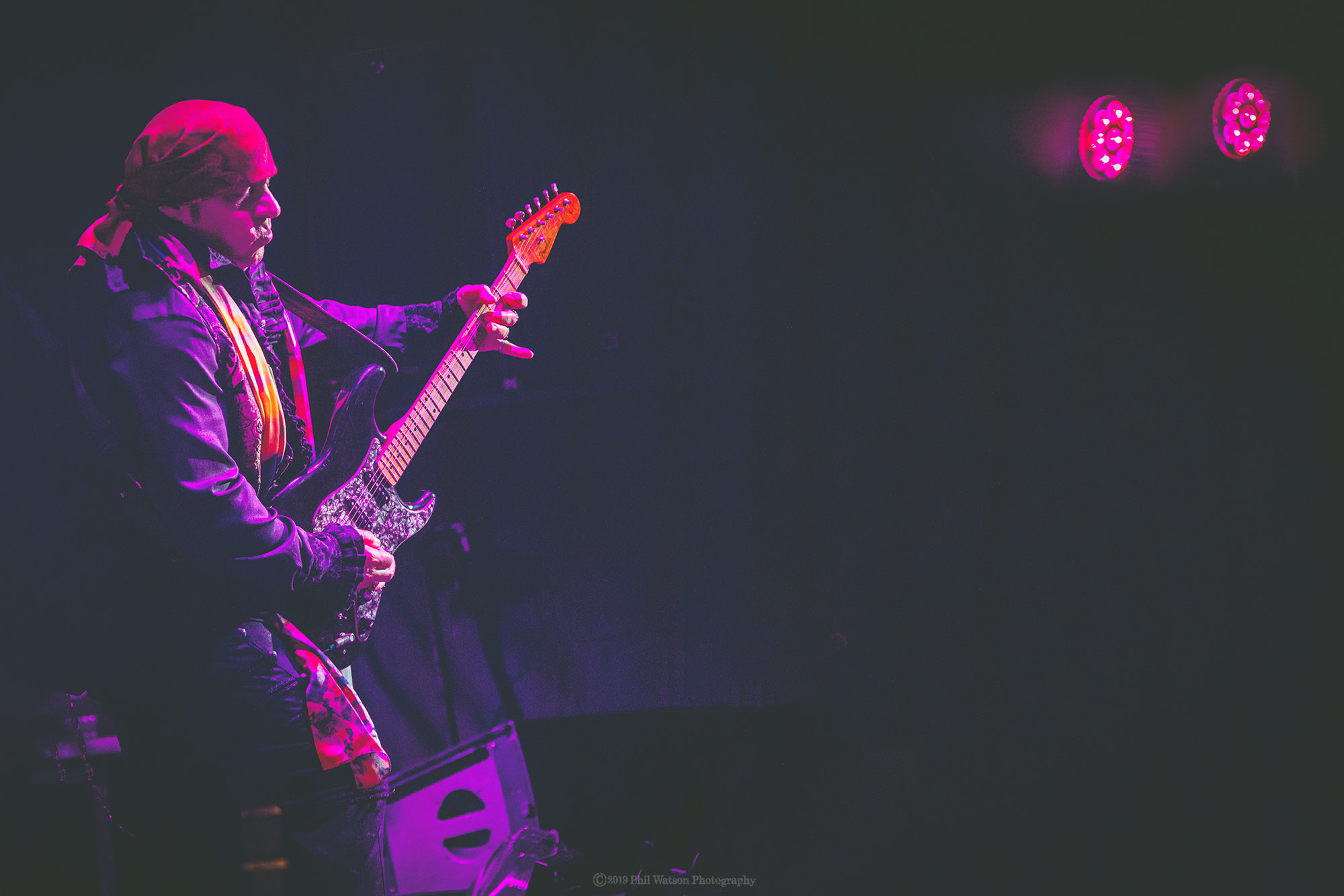 He writes to suit his voice too, for his tough guy gone tender doo-wop vocals on the ballads and slower cuts (see A World of Our Own), and for the indignant activist on his (underrated) political tunes (I refer you to the evergreen Bitter Fruit & Los Desaparecidos, and of course an ecstatically received I Am a Patriot). 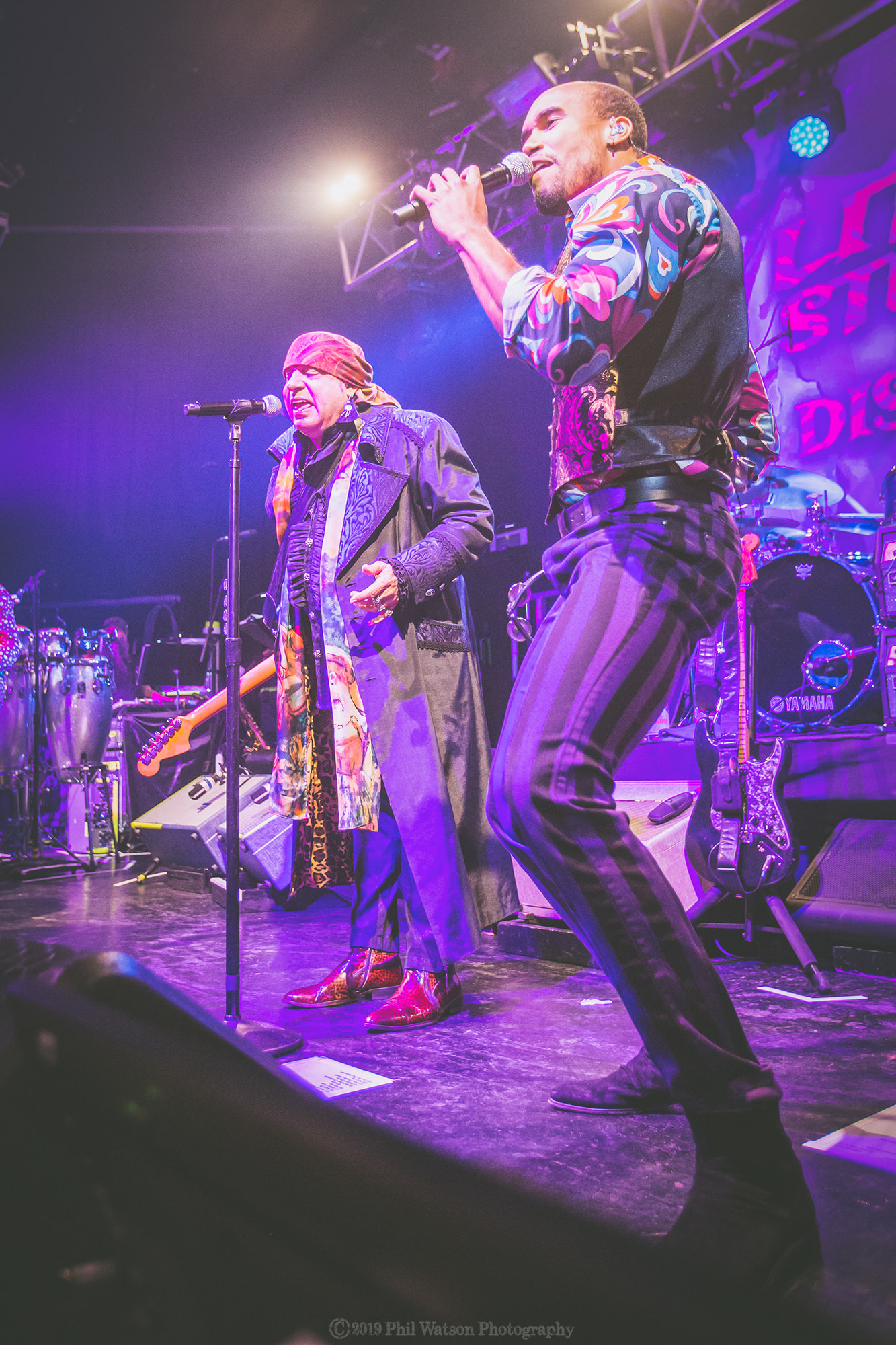 The set closed with a joyful Forever, a tune from the original eponymous Disciples LP, a version so ridiculously jubilant that it swept the crowd before it and left one hankering for more tunes from that glorious album. In fact, without reverting to hyperbole, your reviewer would gladly walk barefoot over broken glass just to stand outside a venue where the current Disciples played this album in full. 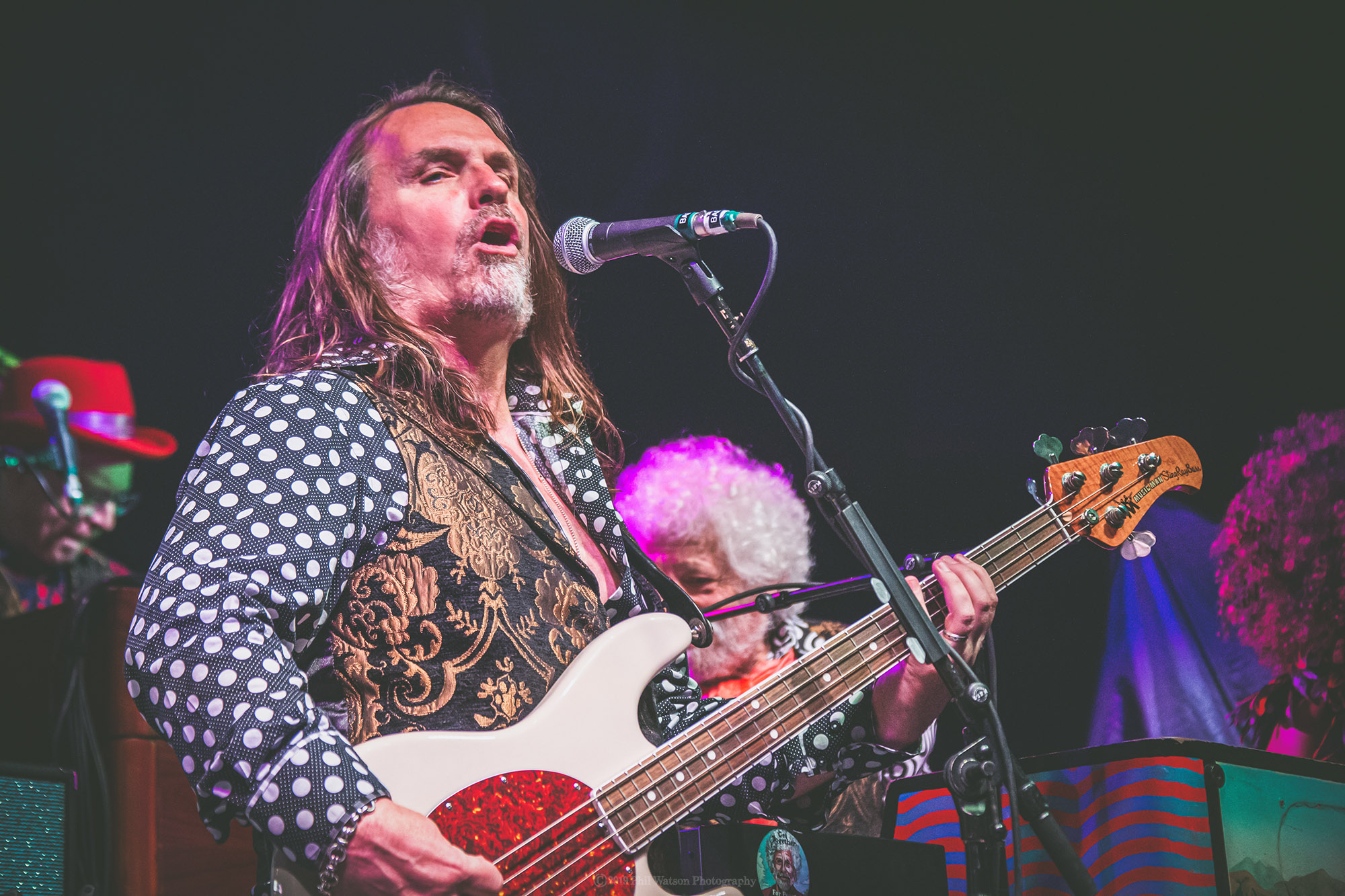 Rather than leaving the stage Little Steven chose to introduce the Disciples and in truth, with fourteen musicians, it took as long to name them as it would have done to leave the stage, wait out the requisite period of adulation and return. An atmospheric rendering of Summer of Sorcery slowed things down, provided breathing space, before a pounding cover of The Dovells’ Bristol Stomp morphed seamlessly into a ludicrously groovy Soul Power Twisting. Sun City was a thundering yet funky singalong / dancealong that was matched by Out of the Darkness, both in terms of the band’s endless energy and the crowd’s endless ability to singalong. 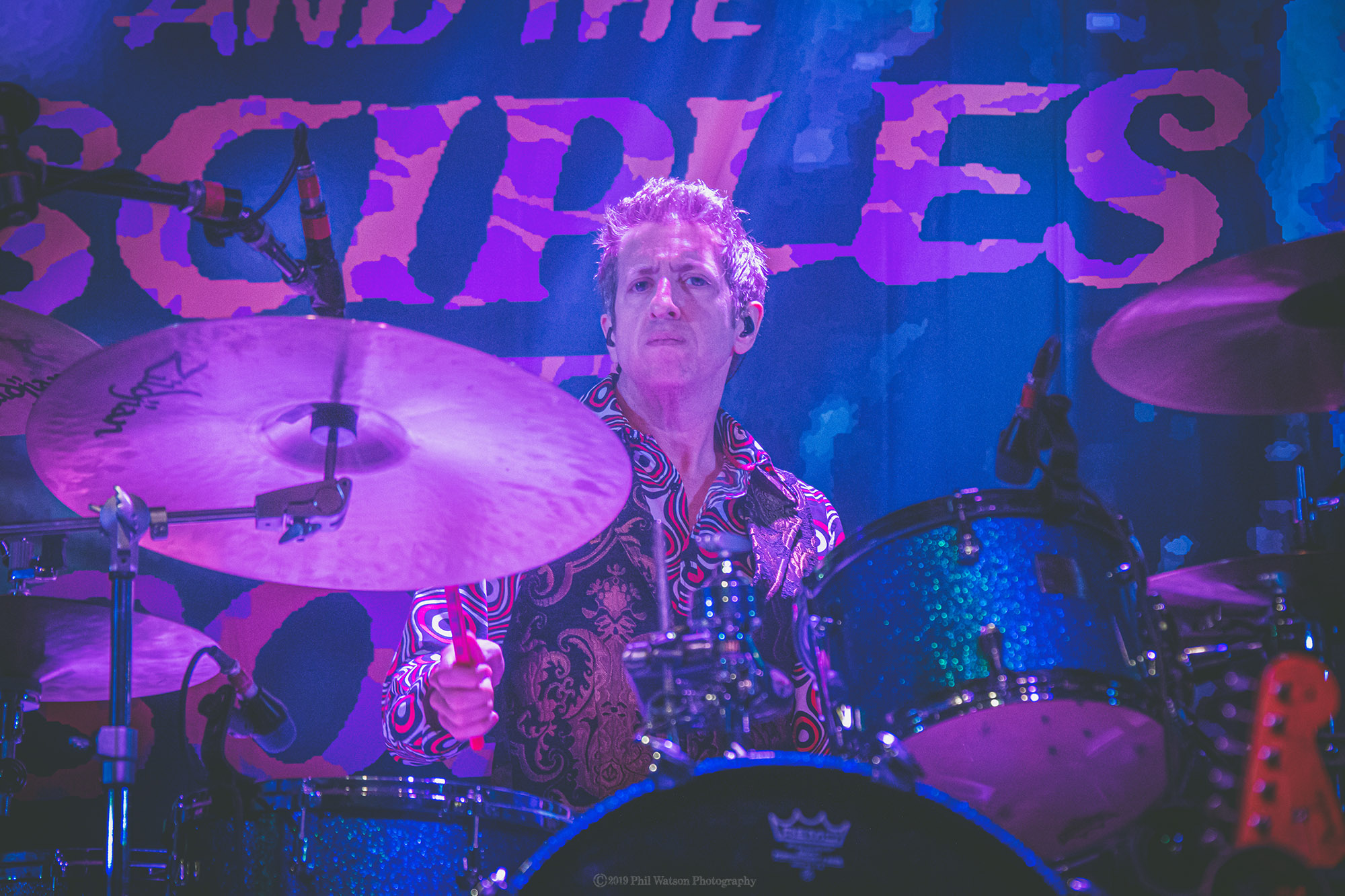 The show was a masterclass in musicianship; it was as joyous as it was life affirming; it was a beautiful example of how to bridge the gap between stage and floor; it was an opportunity to dance and sing and forget your woes for two and a half technicolour hours. Little Steven promised the band would be back: let’s hope it’s soon and let’s hope it’s three and a half hours next time. Be prepared: start working on your cardio.